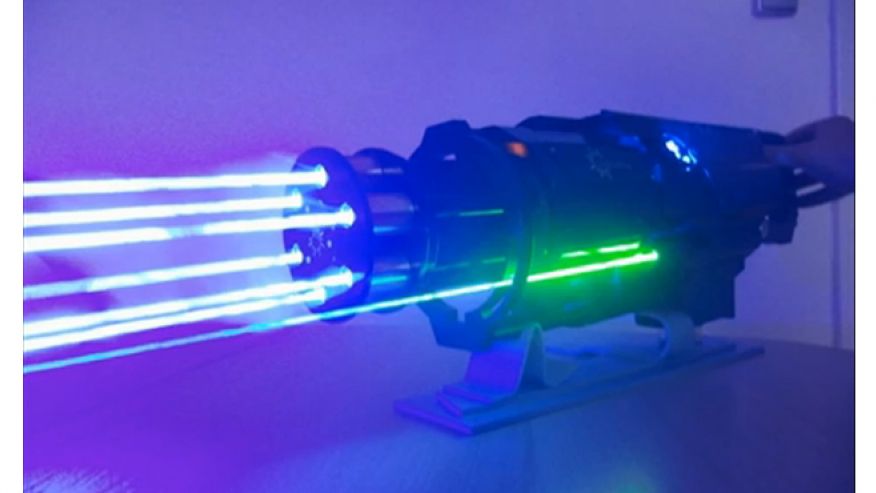 As technology hurtles us closer and closer to that Elysium/Star Wars/Terminator/Matrix future (yes, in that order), it also revolutionizes the world as we know it. Personally, I’m looking to having laser guns, and not the kind you use in laser tag (well, sort of like that, I guess) and blasters that go pew pew when I shoot them. Phasers at the ready, captain! Well, new gun technology is improving things, making guns both deadlier and safer, which is a paradox of Back To The Future-like proportions.

Now, before I go any (I) further, I want (ll) to make (u) it clear that (m) I am not (i) trying (n) to (a) purport (t) a political (i) agenda. If you guys want to start a firefight over it, do it in the comments, or on Facebook, because we all know that’s where the best political arguments happen.

Our story begins in Texas, because of course it does. There is a company there that makes military-esque sniper rifles with plans for a ‘smart scope’ and a marketing scheme to sell the weapons to the general public at a relatively affordable price. This means that, for a couple thousand dollars, the average citizen can have the firepower of a soldier. And because in Texas you don’t need a permit to carry guns, nor do you need to register your firearms, people can, at least in theory, obtain these high-tech weapons without the need for all that pesky training. A gel blaster and airsoft would be a good starting point to try.

And I’m not just saying that as some cutesy exaggeration. TrackingPoint put a video on YouTube (where most videos go, no matter what Vine fans say) of a 12-year-old girl successfully hitting targets from great distances. In a different video, a blind marine veteran, using a TrackingPoint weapon, killed an antelope at 375 yards with the help of a spotter setting up an iPad. An iPad and a gun working in tandem – perhaps the earlier order should have been Matrix, and then Terminator.

TrackingPoint has a new 500 series rifle, which is modeled after the AR-15 platform. It looks exactly like a weapon the military would use, but its target audience is just about anyone, especially since there are plans to make its price comparable to other rifles that lack the computerized scope (among the other perks you might pick up from getting killstreaks). Though the price is now estimated to be around $25,000, the company hopes to bring that figure down to around $5,000 – $7,000 within three years. So clearly the guns are more efficient, making them deadlier. But how exactly are they safer in any place that isn’t City 17?

In Rockville, Maryland (that’s right, road trip!), Andy Raymond, the owner of a gun shop, decided he wanted to sell safe, smart guns. The gun in question is the German Armatix iP1. The handgun is designed so that it will not fire unless it receives a signal from a wristwatch, meaning the two must be in close proximity. As a further measure of security, the owner has to enter a PIN in the watch in order to unlock the firing mechanism.

Gun Technology like this – personalizing guns – could go a long way toward reducing not only the number of guns stolen due to home burglaries (hint, the answer is around 500,000 annually) but also the threat posed by unauthorized users, such as children stumbling across the gun or school shootings. Which is why I find it astonishing that Raymond received so many death threats and protests regarding the use of safety on his guns that he decided he would be safer by not selling them.

What this says to me is that we are still afraid of technology. We’re afraid of the brave new world before us and the mechanical revolution and the speed at which technology has evolved. We’ve forgotten that technology is designed to improve life, to increase comfort, and to increase safety. It isn’t just about guns; it’s about change.

But what better way to face the future, than with guns blazing?

Playing Video Games In Class: Does It Count As Curriculum?

Top 5 Superhero Costumes That Stand the Test of Time