Virtual Progress: How Avegant Glyph Stands to Provide a Leap in Immersion Technology 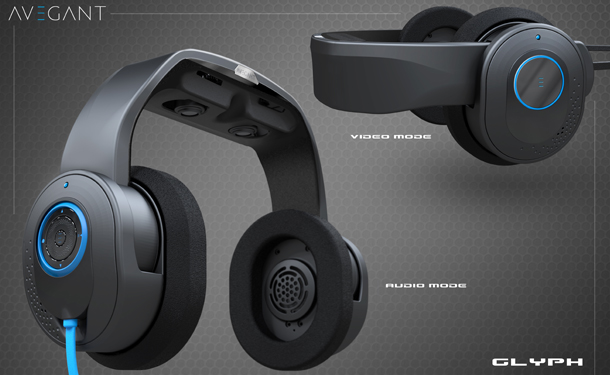 It’s already been a good year for followers of the burgeoning VR industry, and we’re not yet a month into it. Those who got a taste of the latest Oculus Rift prototype at CES 2014 heaped praise upon it, then a Valve-built headset at Steam Dev Days inspired rapturous reviews. While we now know that Oculus VR and Valve are indeed working together (presumably leading to a smooth marriage of Rift hardware and Valve software), Avegant Glyph is a very different beast, and exemplifies the kind of varied innovation we can seemingly expect as 2014 kicks into gear. What exactly is this thing, and how much do you want it? Answering in reverse order, ‘a lot’ and ‘I’ll explain after an illustrative break.’

The Glyph is a Kickstarter-funded prospective head-mounted virtual reality device, rather like the Oculus Rift but with integrated headphones for an all-round premium feel. The other teeny tiny difference that might interest some people is that it functions through bouncing light off mirrors and into your retinas instead of situating screens in front of your eyes. CNET checked out an early version last year; it seemed promising at the time, but clearly was not ready for the limelight. Now, though, the concept has been polished enough to show the public, and the reaction thus far has been extremely positive. When Avegant set the Kickstarter ball rolling recently, the ball rolled so far so quickly that it threatened to run out of track and disappear up a wall. Attracting over twice their goal within days has to be a pleasing start for them, so let’s see if they can push on and deliver.

The appeal of the Glyph’s approach is that it better mimics how sight naturally functions, offering—in theory—greater comfort and no latency issues. On the evidence of the FAQ on the Kickstarter page, it looks very much like they’ve worked things through impressively thoroughly, and the array of endorsements from reputable publications is very handy as we might otherwise be tempted to place too much faith in information provided by people with a vested interest in the Glyph’s success. After all, whenever something like this comes along, everyone wants it to succeed.

Only time will tell if all the claims are accurate, though. I happen to be rather short-sighted and need glasses. Apparently, I wouldn’t need my glasses with the Glyph, being “able to adjust the diopters in the Glyph to accommodate a wide variety of prescriptions and pupillary distances.” That sounds wonderful, but could it possibly be so simple? While I mean that to be mildly rhetorical, it’s also a genuine question; I’m not scientifically equipped to judge the technicalities.

If you want to back the Glyph and get yourself a shiny Glyph Beta by the end of the year (assuming Avegant doesn’t collapse under the pressure), it’ll set you back a cool $499, or about the price of a pretty nice monitor. It’s a bit rich for my blood at the moment, but given what the product is set to offer, it seems reasonable. I heartily encourage you to place down your money so that down the line I may pick up a better version for a cheaper price. Go forth, brave pioneers!

Before we look ahead, let’s all acknowledge that it sounds too good to be true. It does, it really does! Don’t lie, you over there. We’ve been burned before by VR products that promised the world but delivered nothing but disappointment, so excuse my stubborn scepticism. While I understand that my eyes have a sterling history of reacting well to low-level light bouncing into them, the artificial nature of the Glyph gives me a sense of unease, like I’m about to get my corneas forcefully reshaped. I’m very open-minded though, so if Avegant felt compelled to send me a free prototype in an effort to convince me to look past my fears, I would grudgingly take possession of such an item and warily use it for sixty straight hours, or until my brain shut down in the interest of self-preservation.

In truth, I absolutely love immersive experiences, and I want one now; I’m just trying to keep my hopes down so I won’t be crushed if it doesn’t measure up to the hype. That might be the best approach right now, in fact, at least if you don’t feel like stumping up just under $500 for a speculative venture.