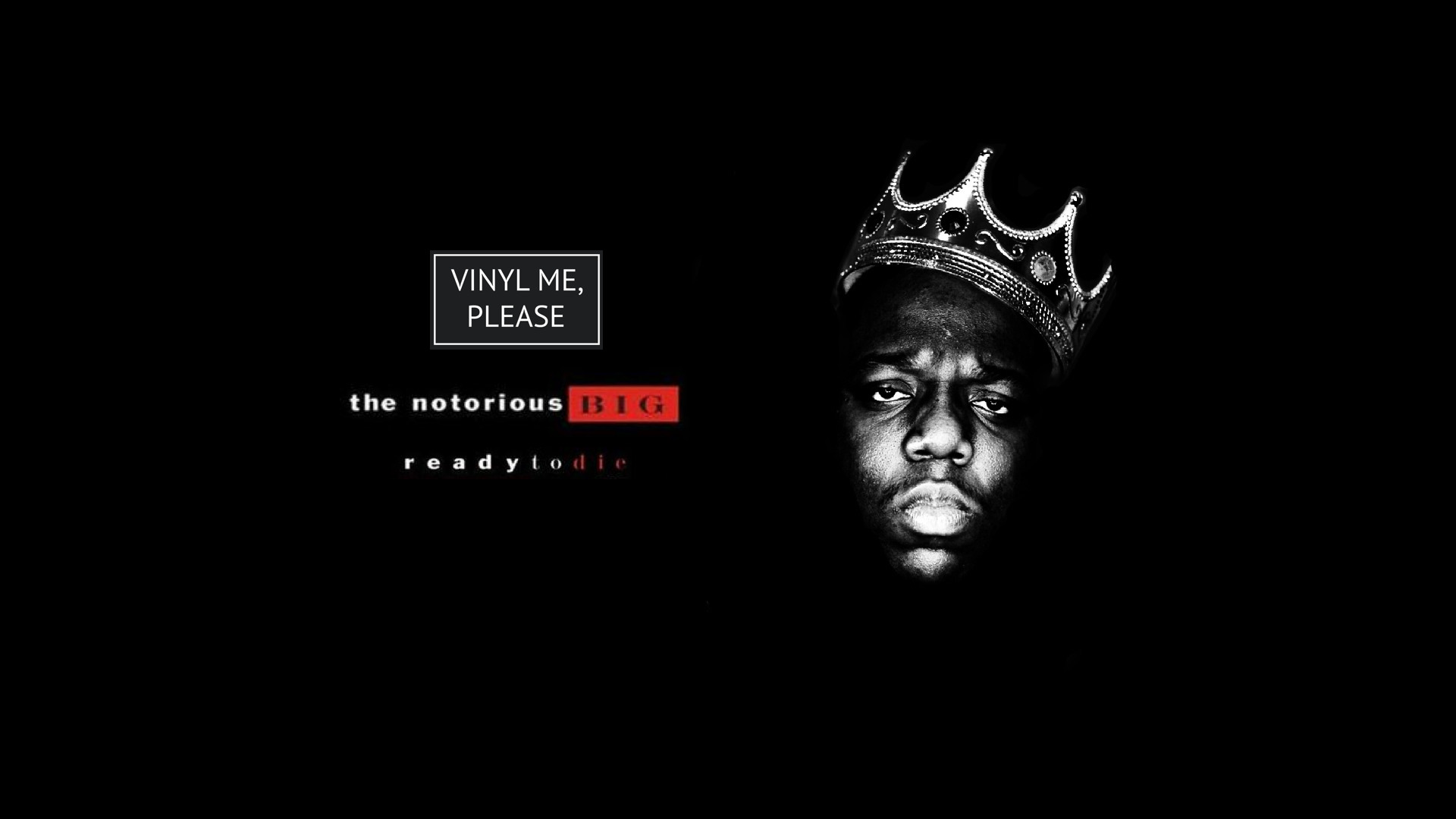 Here’s how it works. You send Vinyl Me, Please some of your hard-earned money (plans start at $25/month) and they send you one meticulously selected album worthy of your time and attention. Easy, right? Each custom pressing (often on colored vinyl!) also comes with special features like original artwork and even a recipe for a companion cocktail. Best of all, you get access to the VMP online store. That means you’ll have a chance to grab a copy of previous VMP selections from the archives – including August’s reissue of The National’s landmark album Boxer  – plus additional rare and exclusive releases.

The store is open, and it’s stocked full of some seriously choice wax … but to be honest, I stopped listening to what new discs are hitting the shelves after Team VMP announced they’d be offering an exclusive pressing of Marissa Nadler’s latest release Leave the Light On (maroon vinyl, ltd to 1,000 copies). Seriously, I don’t know why you’d buy anything else this month. If you choose to spend your money elsewhere, I suppose you could consider picking up a copy of The Upsetters’ Eastwood Rides Again on orange vinyl. Or take a deep dive into the Blue Note catalog with an exclusive, marbled gold pressing of Johnny Griffin’s A Blowin’ Session (complete with original liner notes from legendary critic Ira Gitler). Oh, and did I mention they’re actually carrying copies of David Lynch’s & Alan Splet’s eerie as f**k original score from Eraserhead? ‘Cause they are.

There’s more. A lot more. While the store is now open to the public, many of VMP’s more exciting selections are only available to members. So you’ll have to sign up if you wanna get your mits on them. If you’re peckish about relinquishing control of your record collection over to complete strangers, know that VMP’s Swaps Program is in full effect. That means you can flip any VMP pick you don’t like for a past AOM that’s a little more your speed. My advice? Don’t overthink it. Do yourself a favor and sign up today.

So, what’s in this month’s box? If you’s a true playa, well, you already know what to do. If not, take some notes, ’cause you won’t find a better teacher than The Notorious B.I.G.’s debut album Ready To Die. 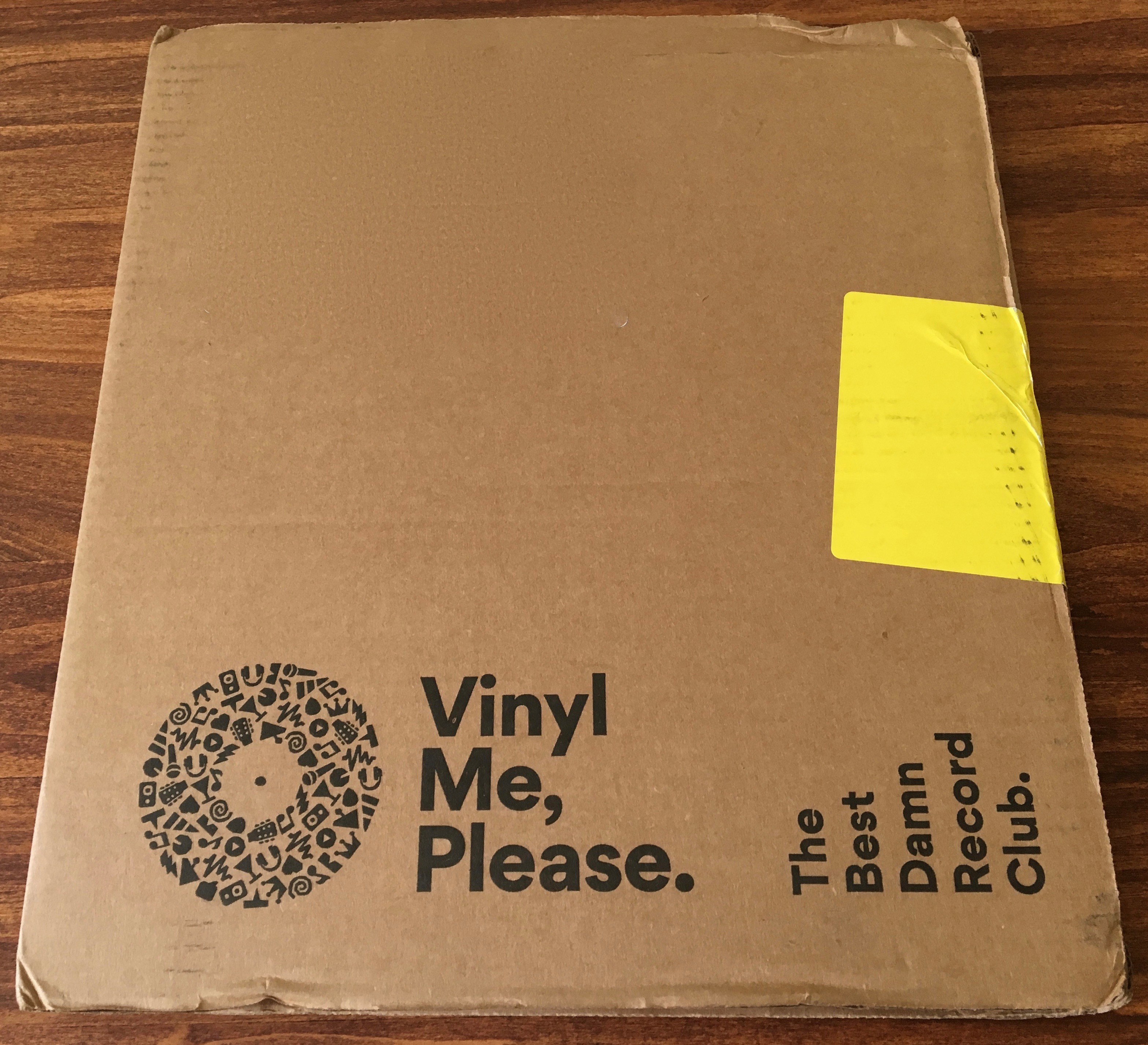 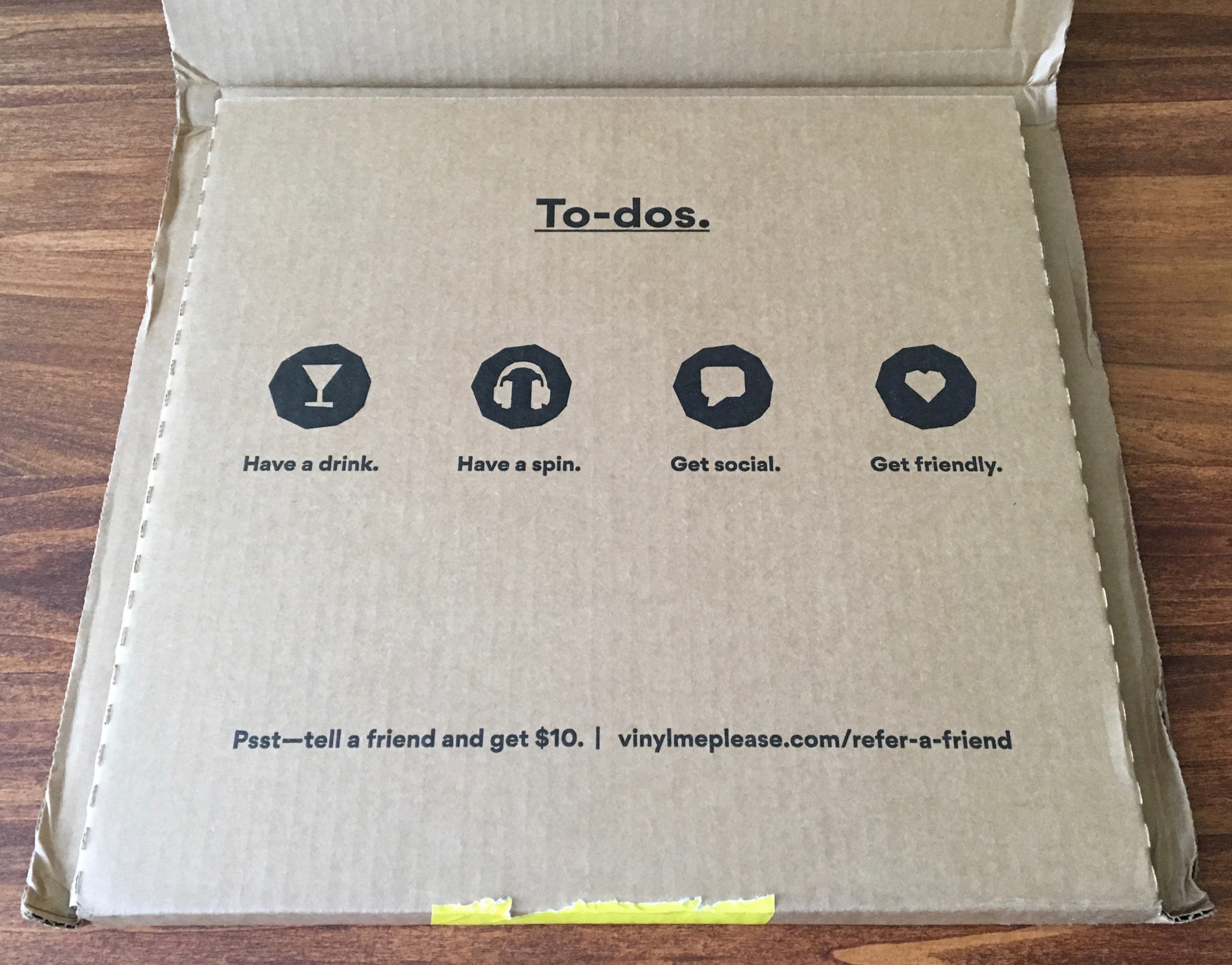 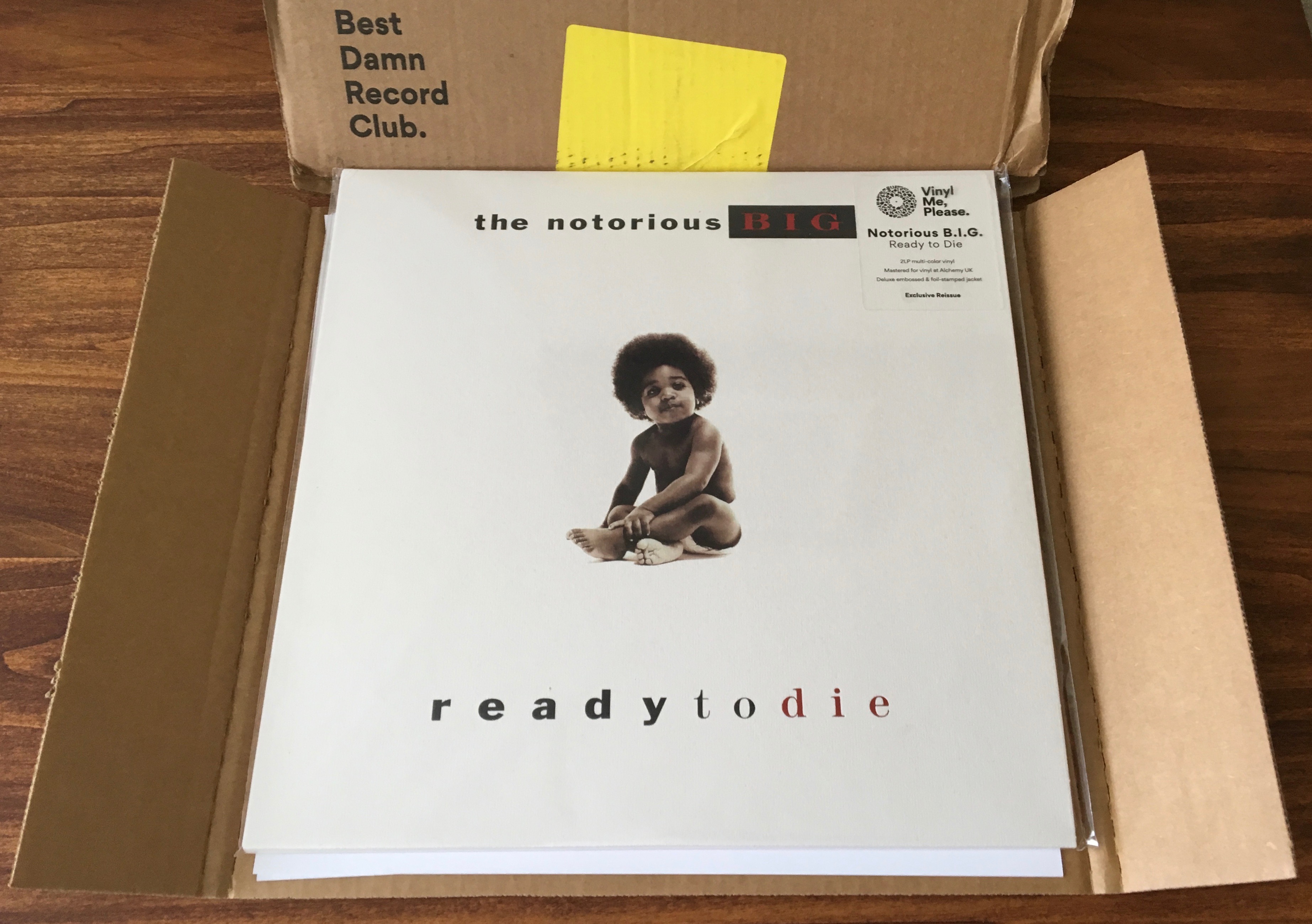 It’s pretty much impossible to say something about The Notorious B.I.G.’s debut album that hasn’t already been said in the 23 years since its release. We all know about Biggie’s rough and tumble youth on the streets of Brooklyn. We know about his subsequent arrests and his eventual rise to hip-hop stardom. We know about his tumultuous relationship with Faith Evans, his life-long partnership with Sean ‘Puffy’ Combs – not to mention all that East Coast/West Coast nonsense. And we know how all of those elements influenced the heavy tones and easy flowing style that Biggie would come to be known for. We know all of this because we hear it in 17 tracks that form Ready To Die. Released in the Fall of 1994, Ready To Die is one of those rare albums that was canonized the moment it was unleashed on the world.

It’s also the only one of Biggie’s albums that was released while he was still alive. Ready To Die is an album that understands the oft destructive nature of creation. It understands that there’s not always a way out for young men and women in urban areas. It understands that even getting out can come with its own set of  problems. And it remains an electrifying if haunting document of one man’s struggle to find his way. One that proved far more prophetic than anyone involved could ever have known. So, rather than try to find a bunch of clever new things to say about Biggie’s astonishing debut, I’ll just repeat something that you should already know to be true: Ready To Die was, is and ever shall be one of the greatest hip-hop albums ever recorded. Got it? 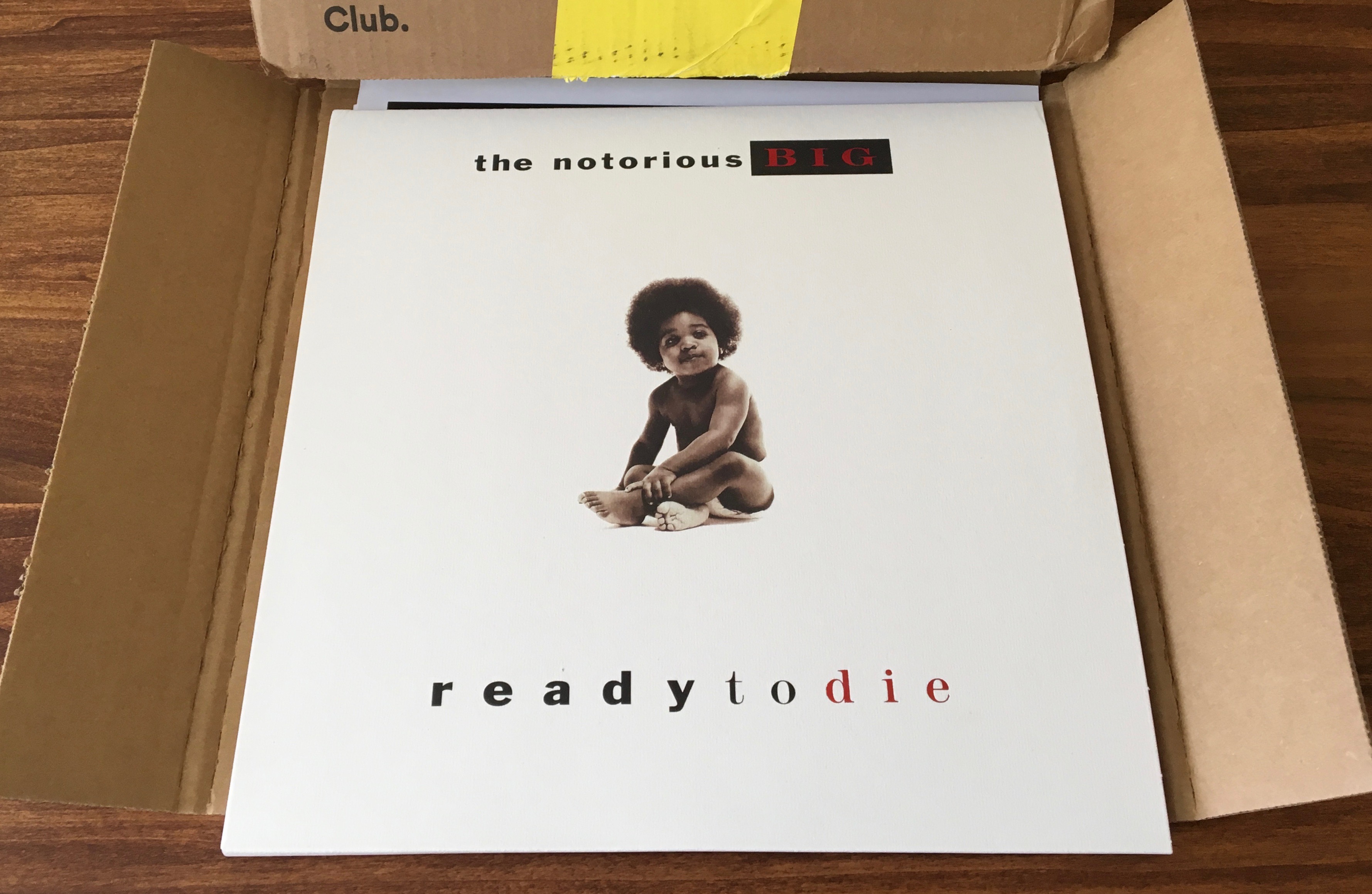 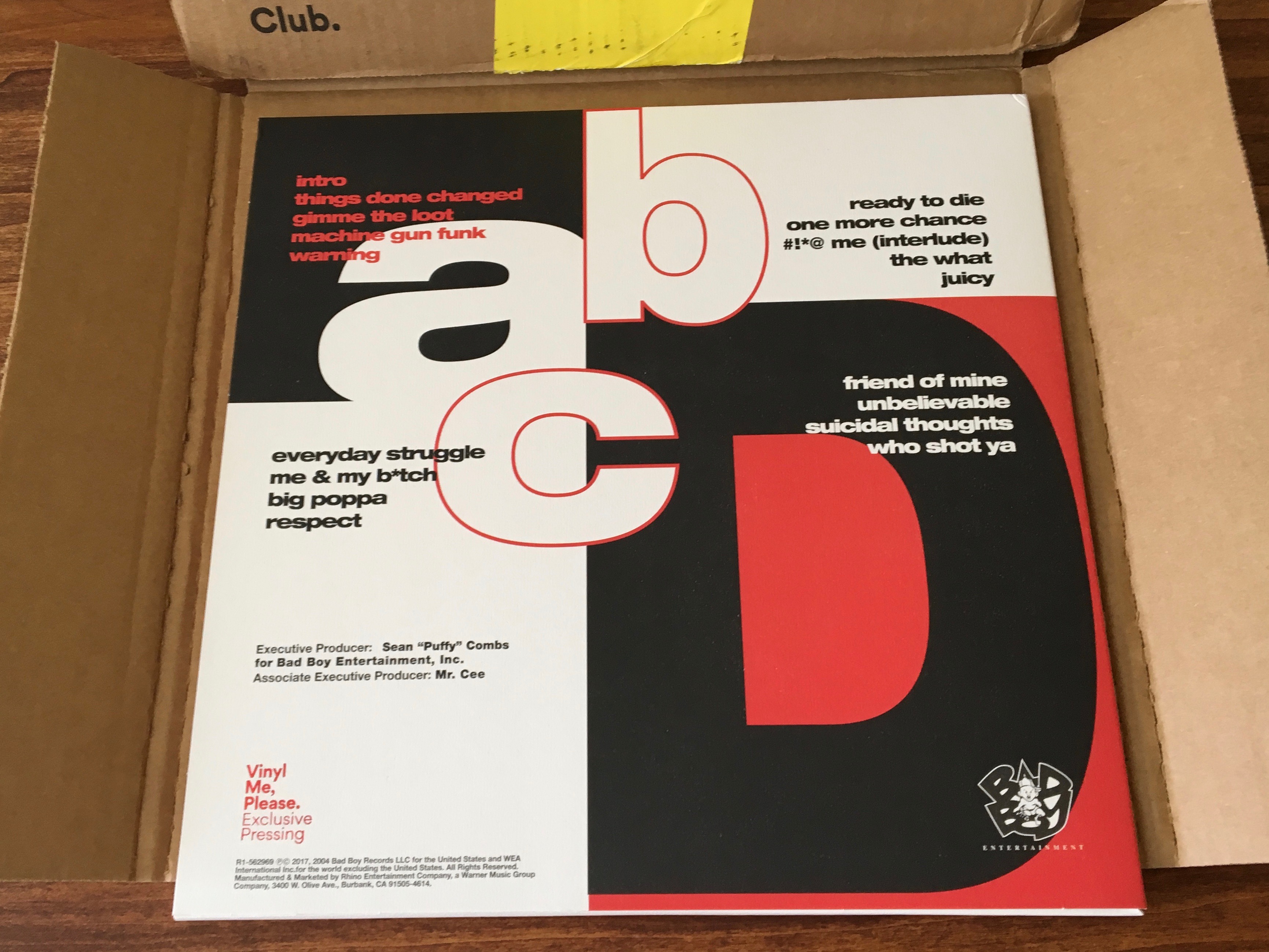 Right then, let’s get down to business. But before we do, take note of the important information on this little sticker. 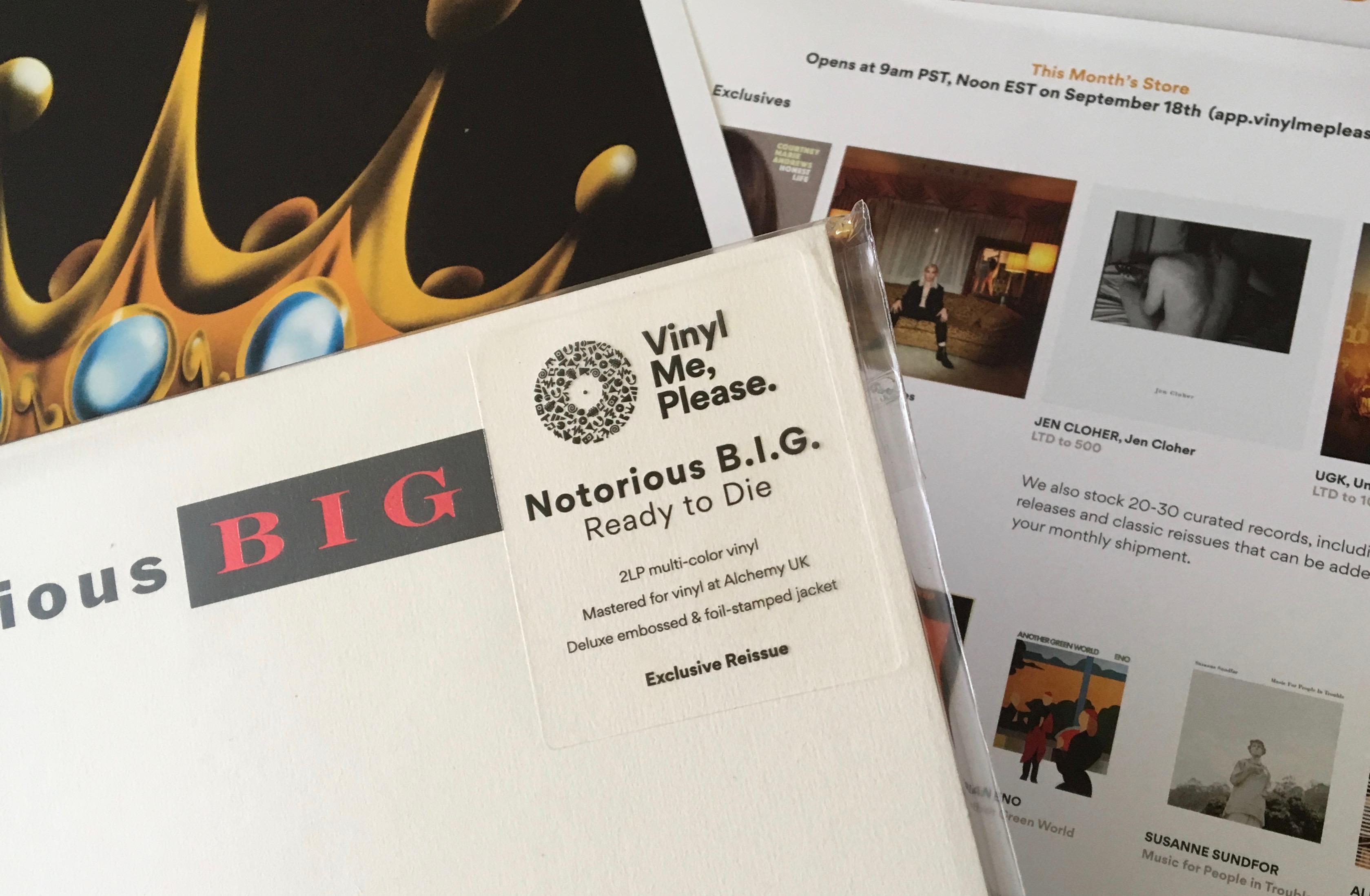 And don’t miss this foil stamped marking on the back. Playas know the game. And VMP’s game is Exclusive Pressing. 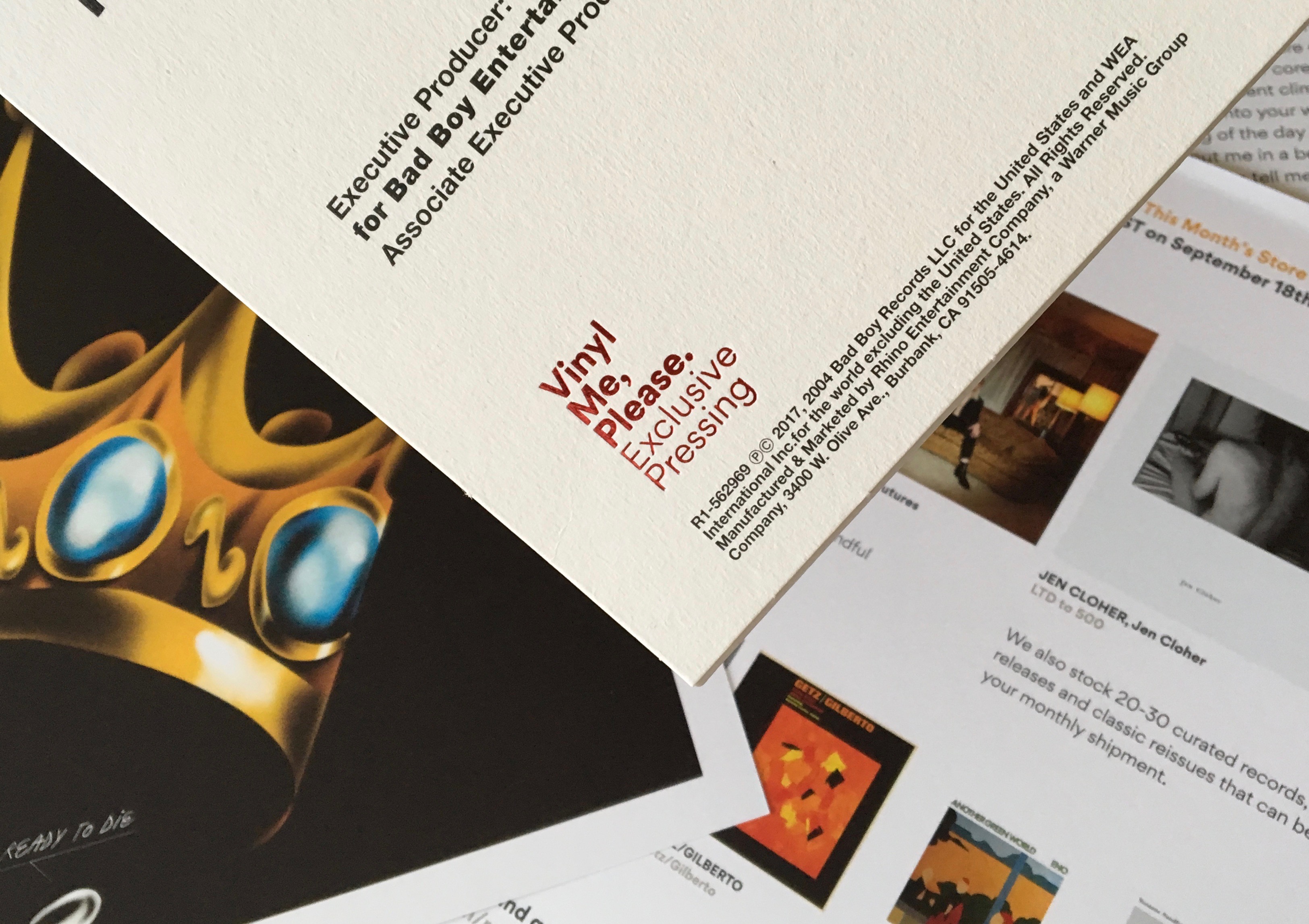 Now, what’s in that box? To begin with, a little poetic rambling from VMP co-founder Tyler Barstow. Gotta say, Mr. Barstow really outdid himself this month. 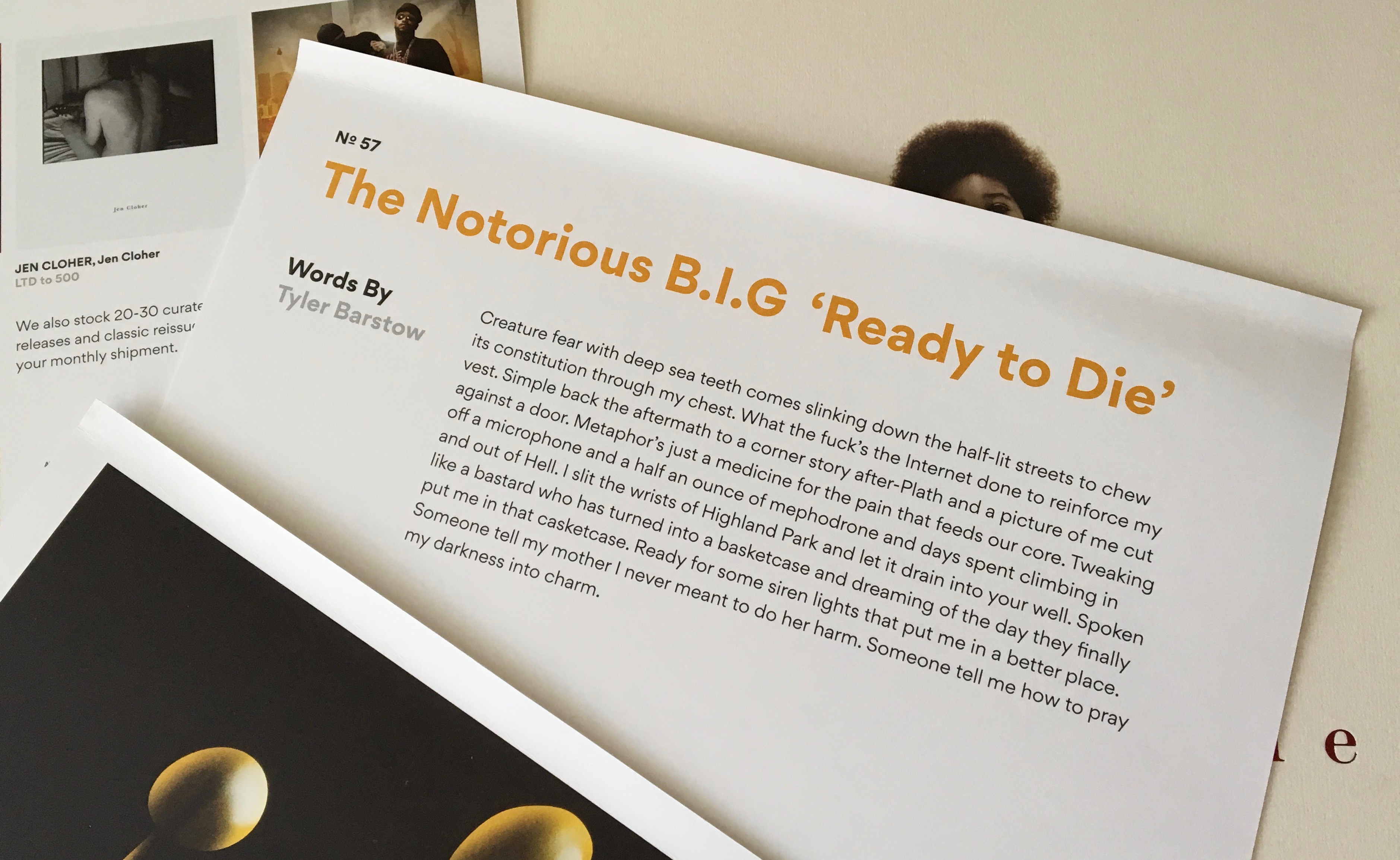 Before you flip that insert, check the bottom corner so you can pass a hearty thank you on to the VMP staffer who packed your box. Thanks, CO! 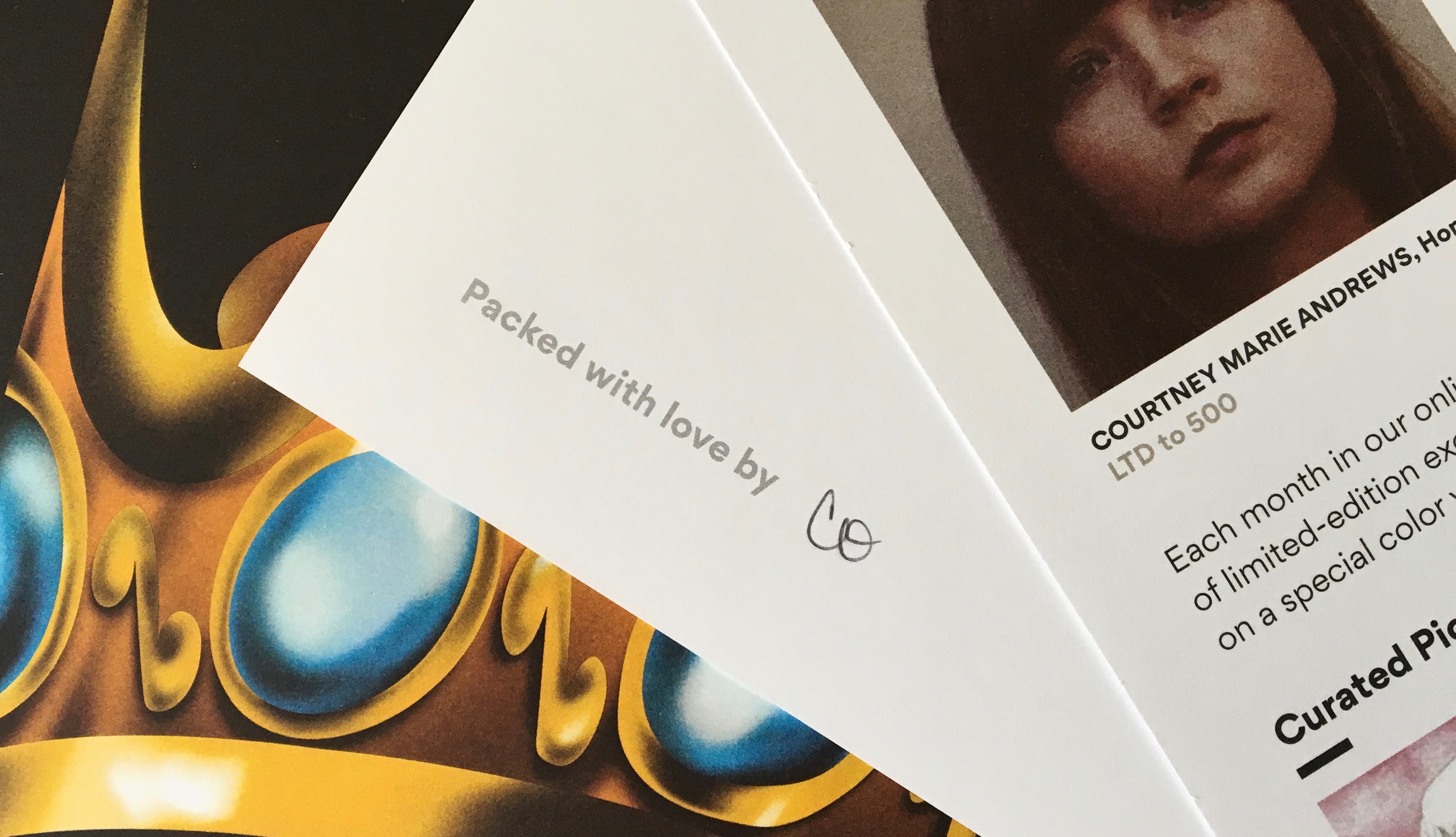 Remember to flip that slip too, ’cause that’s where you’ll find the Ready To Die companion cocktail. It’s called ‘Cognac, Champagne & Conversation’. It’s got cognac in it. But prosecco instead of champagne? Seriously, this is a drink that should be fit for a king … use the champagne. 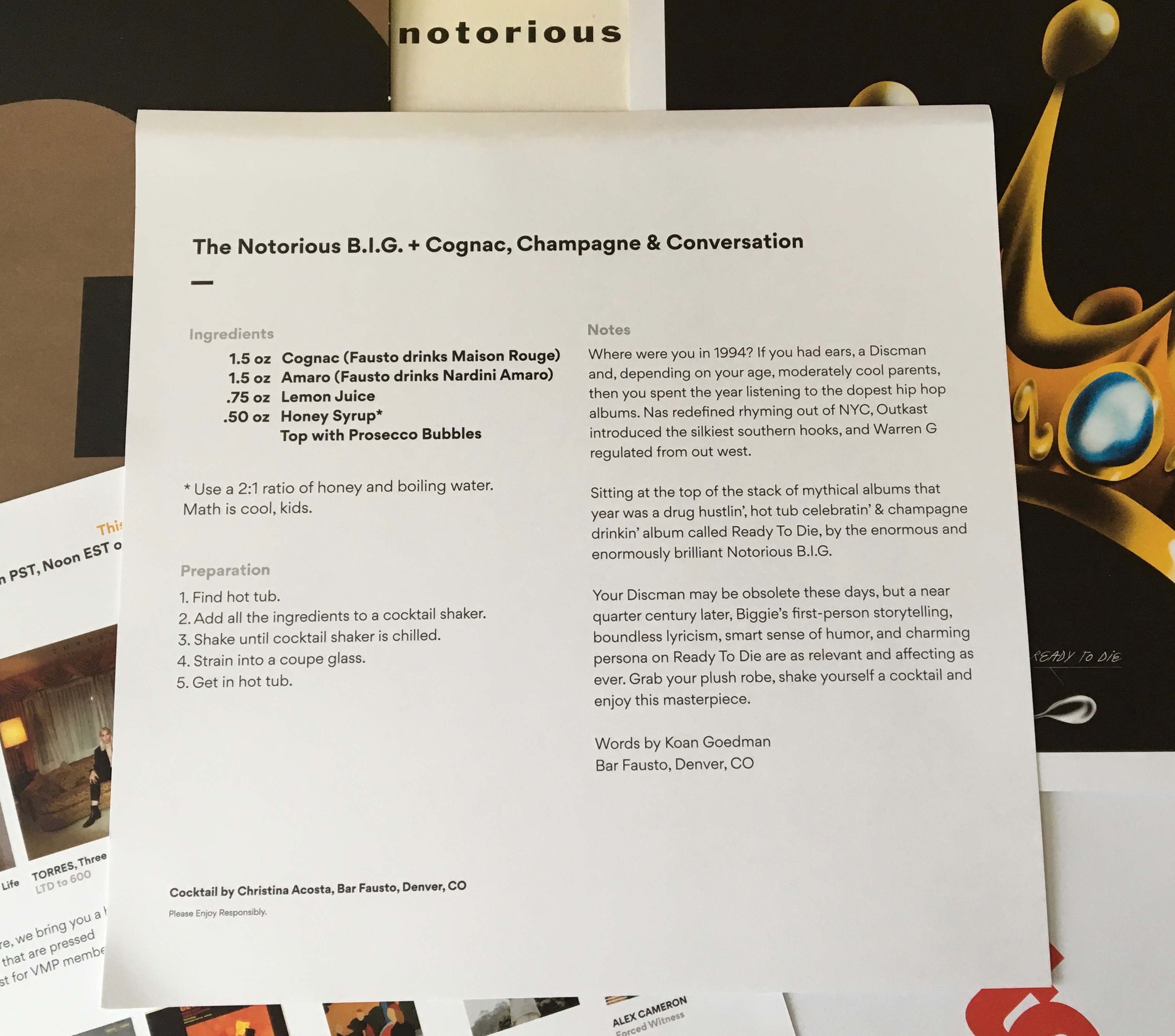 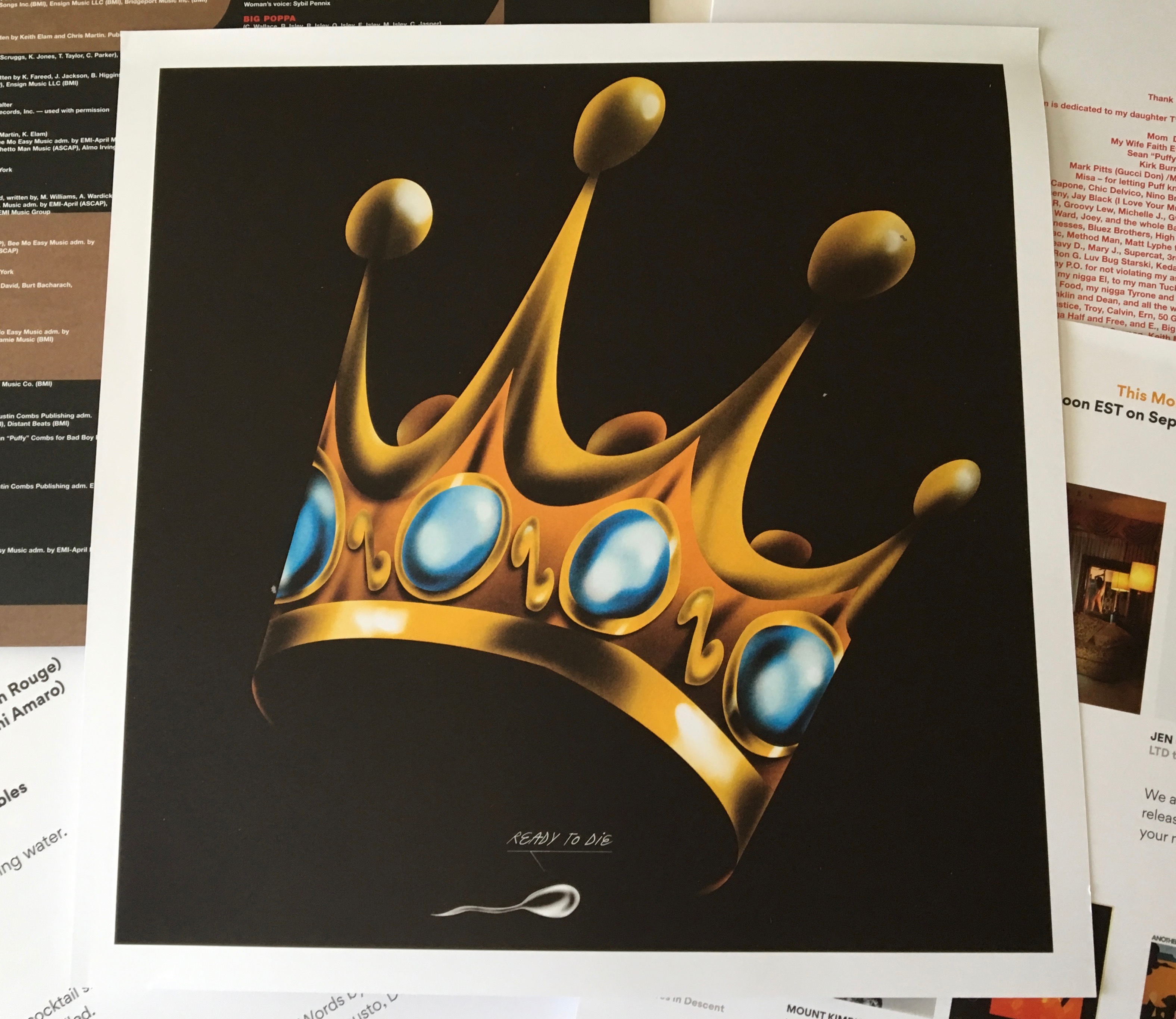 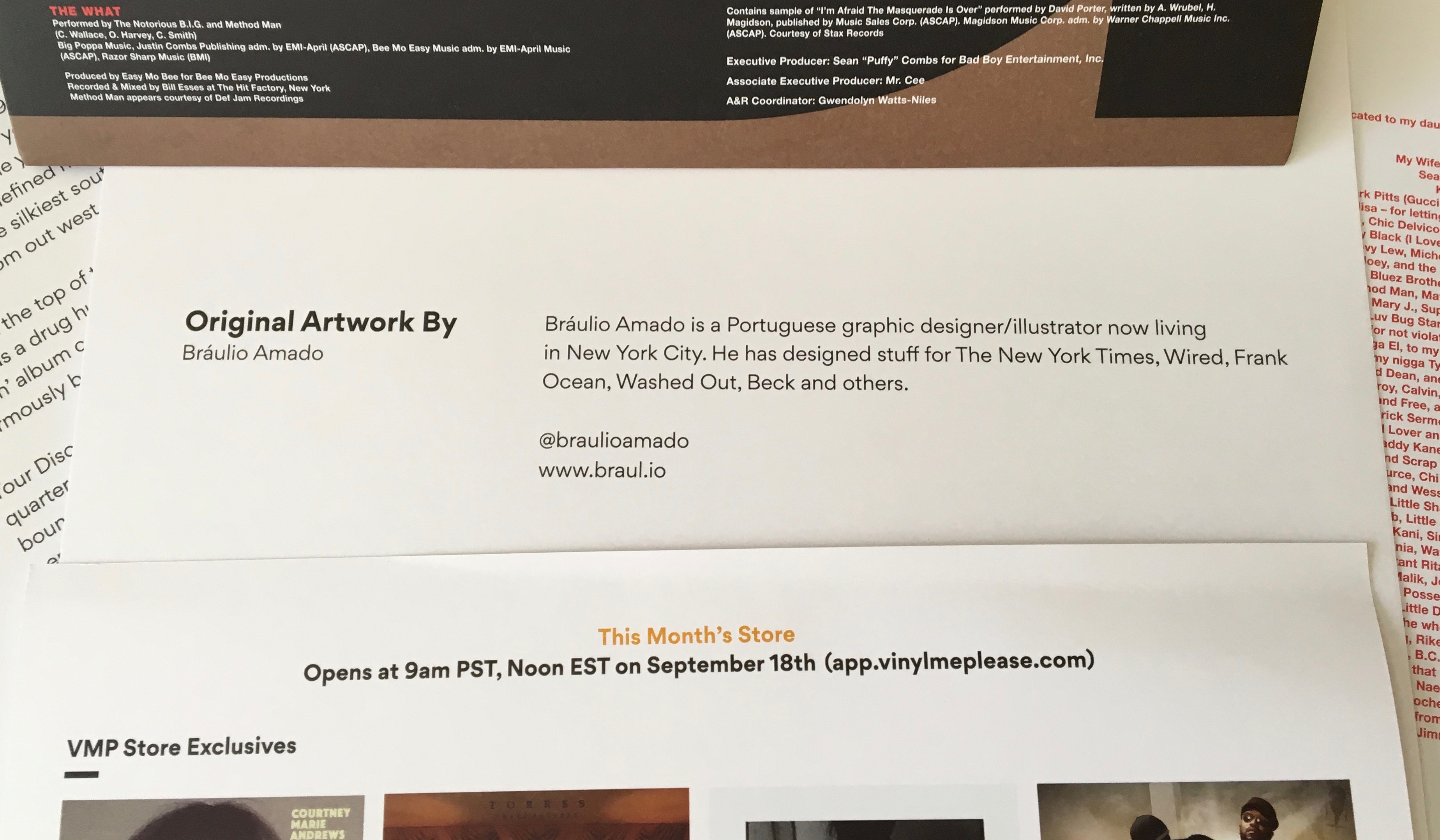 Make sure to check out this little insert, too. It’ll come in handy if you’re planning to drop some coin in the Member Store this month. Yes, there’s a new Protomartyr album coming to the store. Get on it. 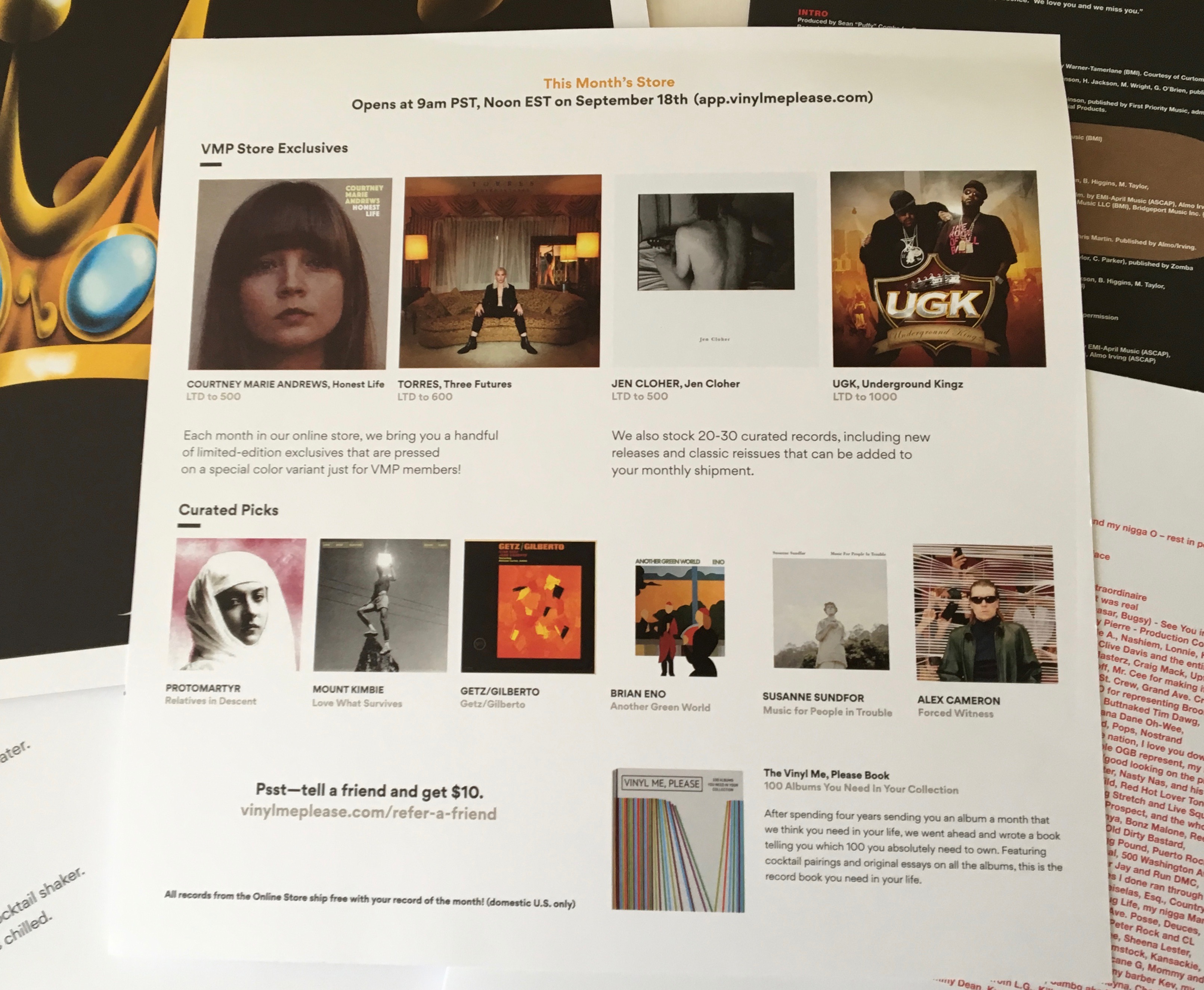 Don’t stop digging, ’cause there’s still a couple of records in that dust jacket. Once you’ve got those discs out, take a moment to dig on their individual sleeves. Trust me, there’s a lot of important info there. 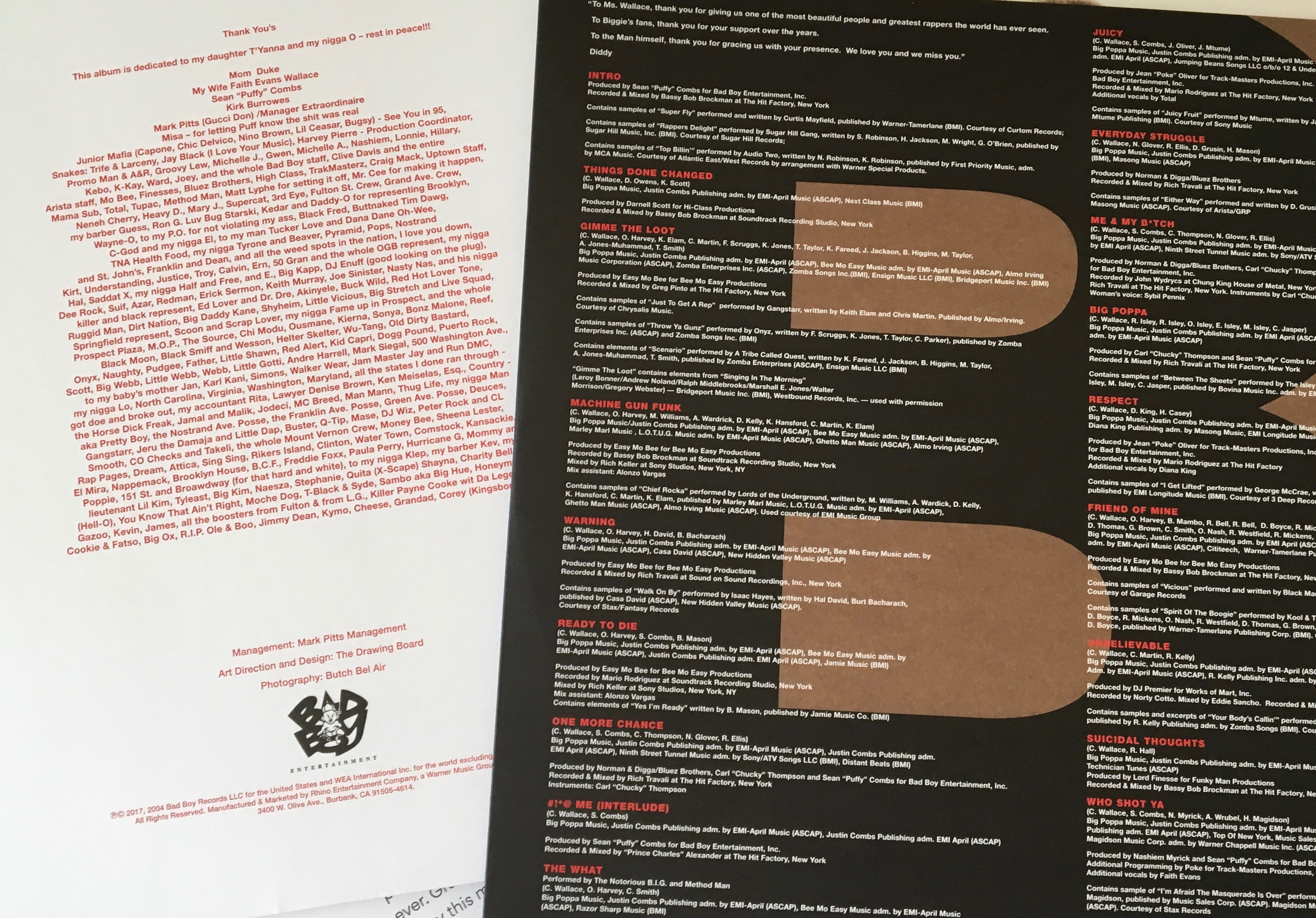 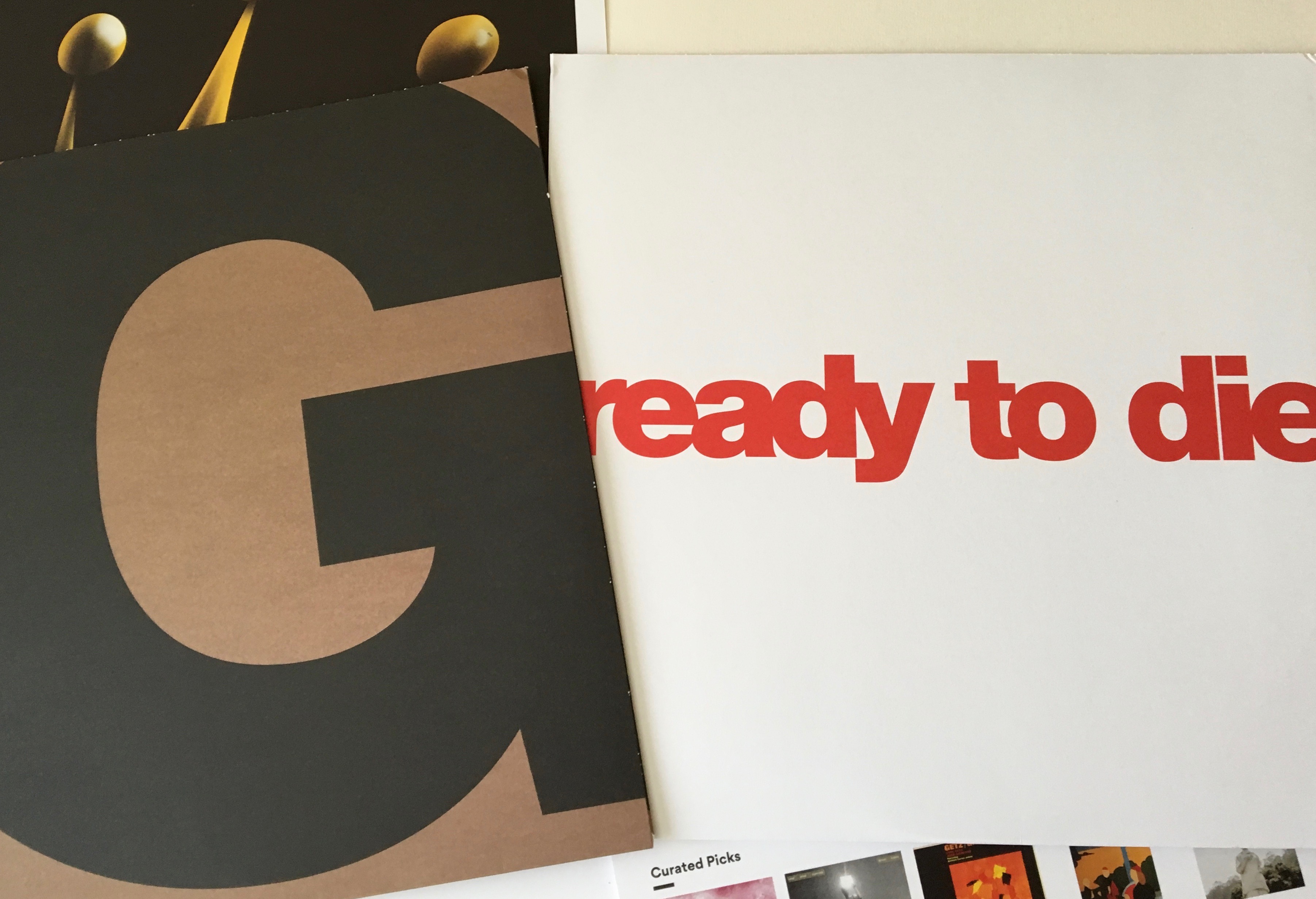 Just in case you forget the name of the album, it’s printed on the inside of that dust jacket. Which is really kind of brilliant. Call me crazy, but little touches like these totally make the experience. 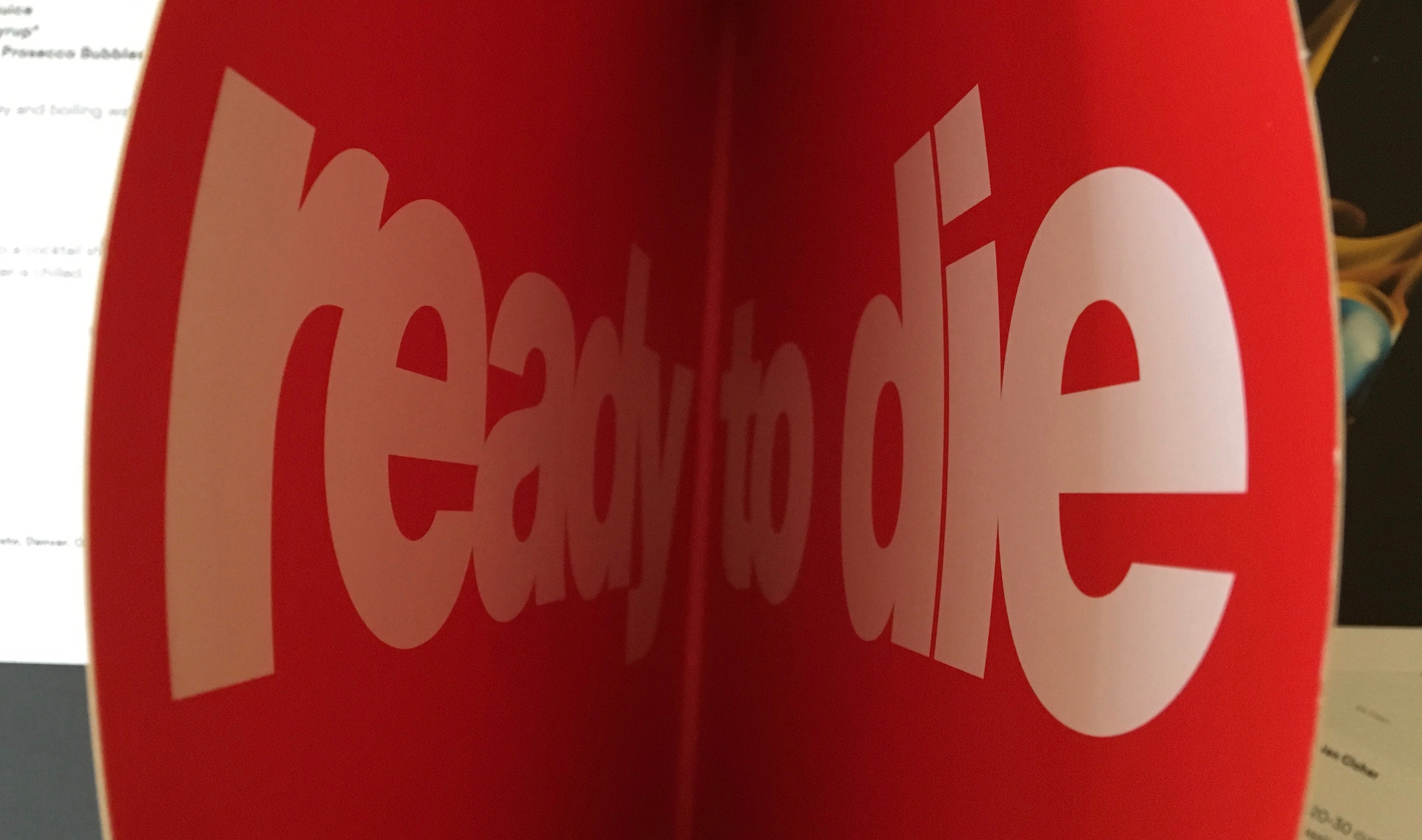 I know, I know, we’re supposed to be unboxing a record already. Fine, here ya go. Just so you know, there’s two discs this month … and they’re both seriously bad boys. 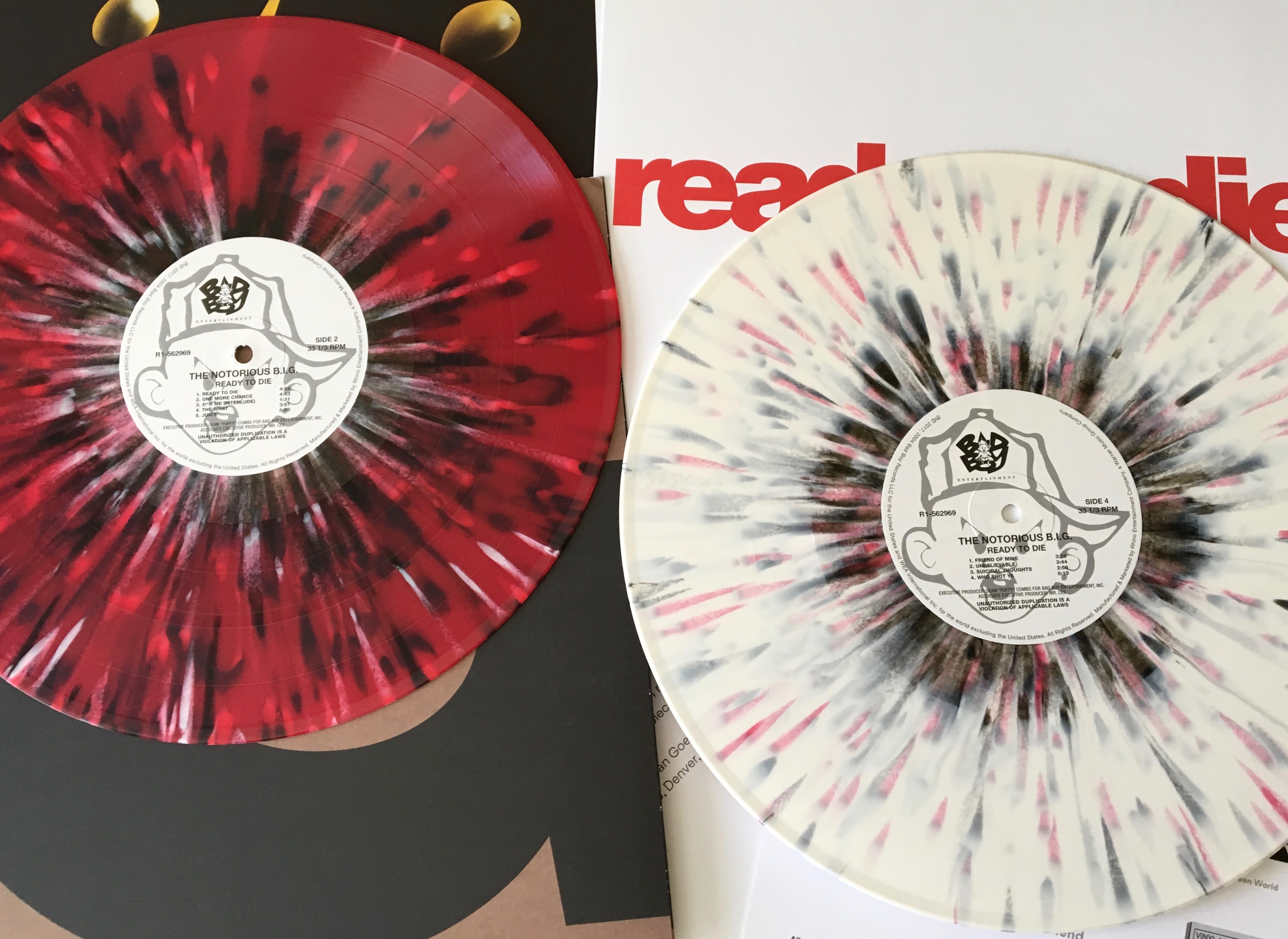 But when it comes to my deck, well, I like the red one. 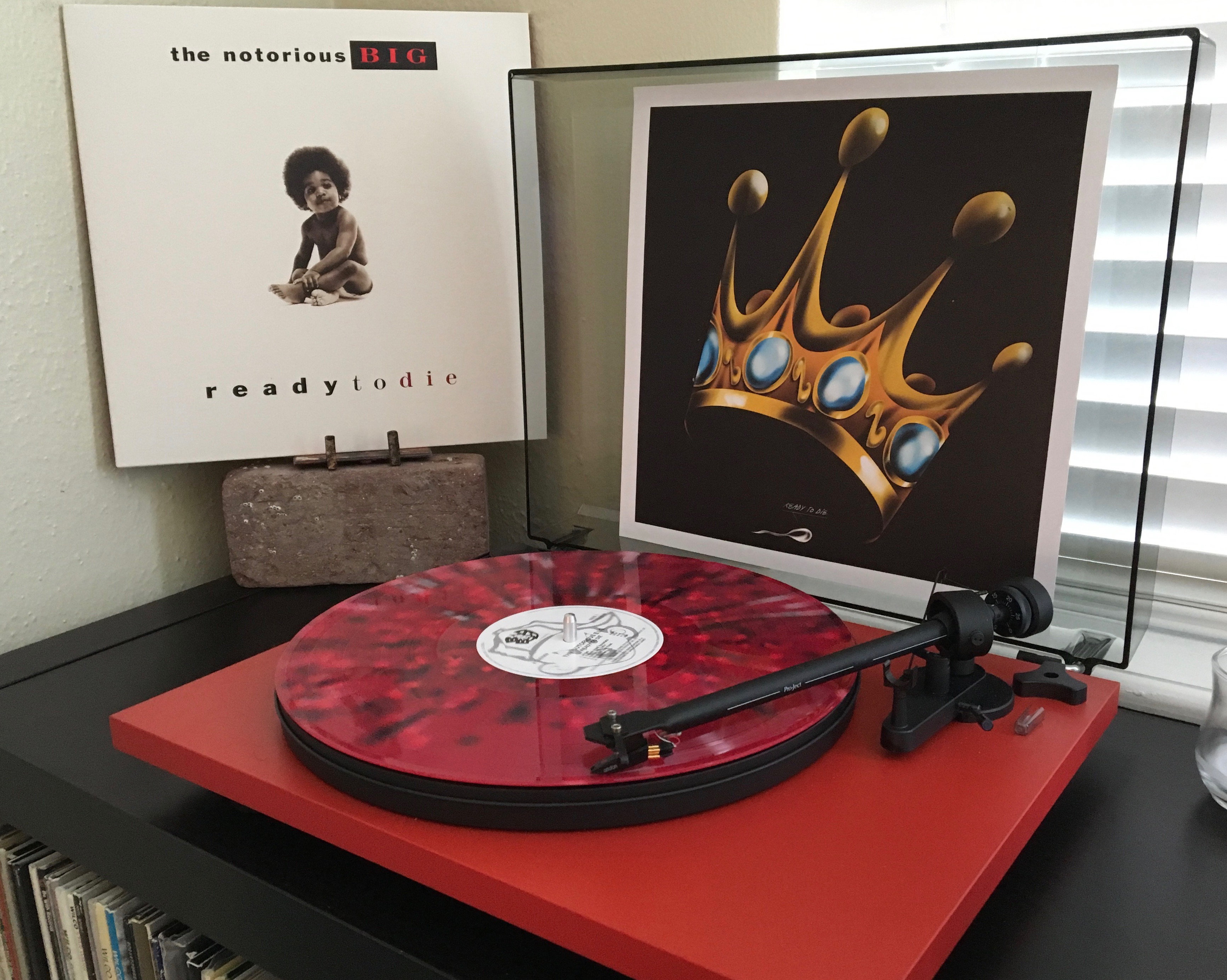 How’s it sound? Like a voice from beyond reminding you that the struggle is still real. And that it never ends … even in death.

I wonder sometimes whether or not hip-hop is still relevant as an art form. Whenever I start thinking that way, I try to find a moment to listen to Ready To Die. About halfway through album, I start to remember the possibilities of hip-hop. I remember why it still matters. I remember that if you really want to understand what’s going on in the world, you need to spend some time listening to all sides of it. If you can listen to it on vinyl … all the better. I’d like to thank the folks at Vinyl Me, Please for giving me the chance to listen to The Notorious B.I.G. that way. And I’d like to thank them for continuing to make every month a musical adventure.

A big THANK YOU to our friends at Vinyl Me, Please for sponsoring this subscription. Don’t forget to check out the official Vinyl Me, Please website and sign up to get some choice wax delivered right to your door each month! Can’t wait to see what crunchy treat they send our for October! 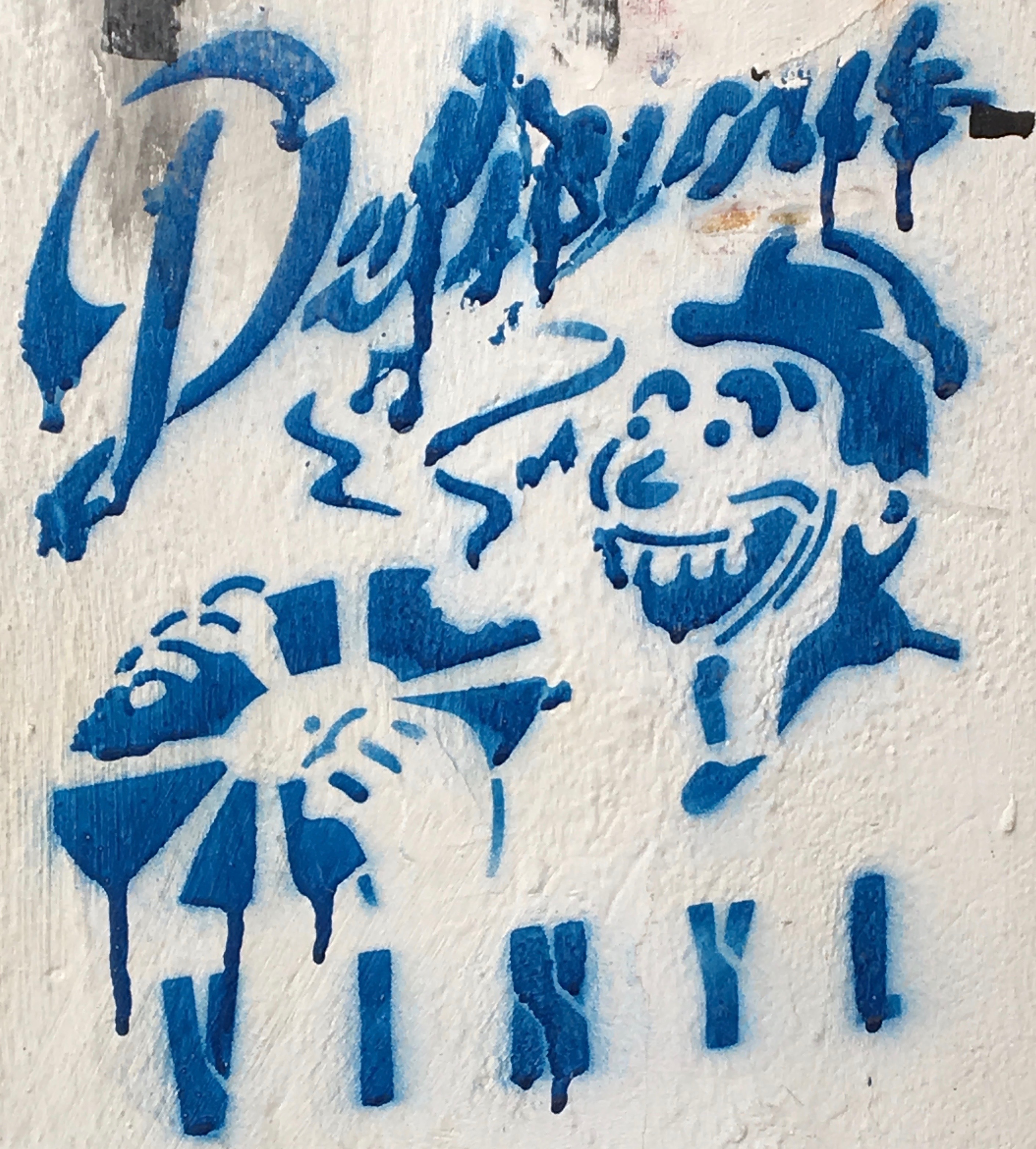