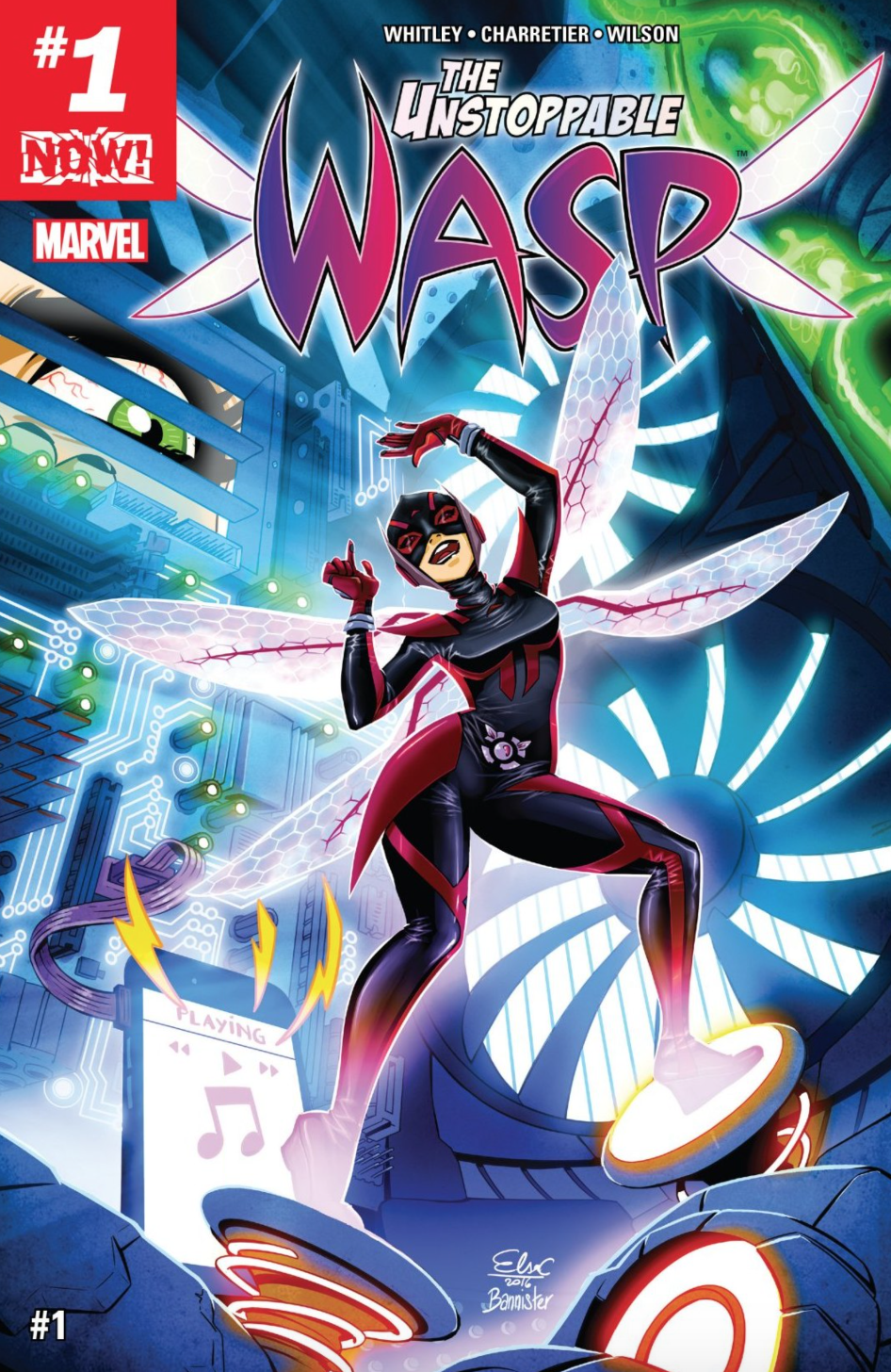 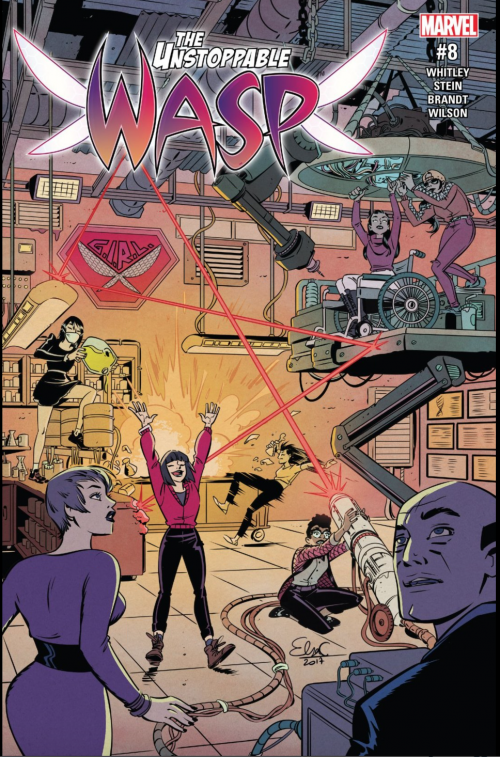 The best comic I read this week was The Unstoppable Wasp written by Jeremy Whitley with art by Elsa Charretier (and others) and colors by Megan Wilson.

I didn’t expect to like The Unstoppable Wasp as much as I did. Actually, that’s not entirely true. I counted on loving it, having read writer Jeremy Whitley’s Princeless (which is great and you should definitely read). Because of that, seeing that Whitley worked on the Wasp was very exciting.

The problem was my expectations. I was expecting a superhero comedy series like Squirrel Girl or Hellcat. I was expecting more Janet van Dyne. I was expecting more Pym Family stuff. Initially, I was let down, although that changed. What we got was a very bright, very optimistic series about a young girl trying to science everything better. And it’s awesome. It just took me a few issues to realize that.

I recognize I was not the target audience. I’m a pretty classic “superhero” fan. Male, straight, half-white, a continuity-lover. This book is made for girls who are into YA and superheroes and also into science. It’s about keeping that love for science going and providing a role model for them. Reading the first two issues, I was kind of turned off. While gorgeous and smart, it seemed a bit “much” I guess. It was unabashedly hopeful and it wouldn’t let you say no to that. Which is a weird thing to say considering the nature of the genre.

It Was Issue #4 That Hooked Me

Nadia tries to reform the supervillain Poundcakes and it doesn’t go her way. I realized that the problem wasn’t anything with the book. It was with how I was looking at it. Nadia beats herself up over her perceived failures and it struck me when her kinda-butler Jarvis tells her that sometimes we have limitations and can’t save everyone. She just bounces back and breathes new life into the “seen-it-all” Jarvis. And she kinda did that to me too.

When I reread those first two issues, now 100% on board, they worked much better for me. Granted, some of my same issues remained, although they now came across as pilot jitters rather than real problems. Dialogue that I personally thought was wonky, some still was, but other parts I now read as quirks of the character.

What the series is “actually” about is Nadia, the daughter of Hank Pym a.k.a. Ant-Man a.k.a. Giant-Man a.k.a. Yellowjacket a.k.a. Michael Douglas. She’s the daughter of Pym’s first wife who was kidnapped and died. Hank never knew Nadia was born. She was raised in the Russian Assassin program, the Red Room.

Now living in Pym’s old house, Nadia is inspired to set up G.I.R.L., a lab of all the young female geniuses not recognized by mainstream science. All the people who would slide under the radar otherwise. (The series likewise contains interviews with real women in STEM fields in every issue). It seems like an impossible task, but Nadia never lets that stop her. Just as she’s about to make it happen, the Red Room tracks her down and wants her back. 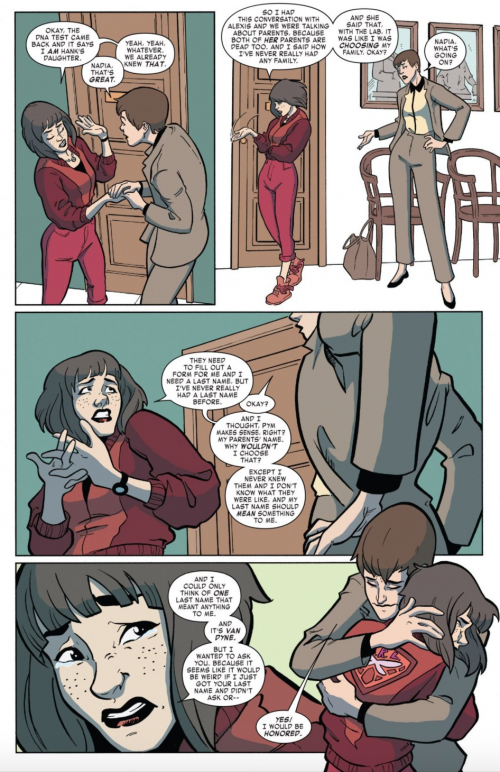 Nadia feels everything so much. Her highs are stratospheric and her lows are subterranean. She wants to save everyone by helping them be the best people they can be. It’s enthusiastic in a way that seems unreal until you believe in it too.

Every character has a distinct voice complemented by individual fashion senses. Seriously, everyone in this series is so stylish. I’m très jealous.

The art in every issue is clear and fun. Elsa Charretier is the main artist (issues one through six). The facial expressions are phenomenal. She does a lot of really fun stuff with panels. In the first issue, Nadia takes control of a robot and syncs it to her dancing, the panel cuts her spin and the robot’s making four panels inside of one larger panel. There’s a lot of using the same stationary location juxtaposed against movement to show passage of time.

Veronica Fish draws issue seven which focuses on Janet van Dyne. She’s great, with really kinetic movement and body language. There’s a scene where Nadia freaks out about her friend in surgery. She’s constantly moving, shifting, contorting. Janet’s just sitting there as collected as she can be. Ro Stein and Ted Brandt take over on the last issue and they’re great also, providing an appropriately enthusiastic finale.

Megan Wilson colors every single issue and its as much her book as Whitley’s.The bright palette does a great job representing Nadia’s bright and simple world view. As Nadia grows and learns, it remains, but now contrasts her more nuanced worldview. There’s a consistency of visuals even when the artists change and a lot of that has to do with Wilson. Her use of colors as motifs is especially noticeable in issue seven where most of the action takes place in two locations.

Female Heroes Inspiring Girls Who Want to See Themselves in Comics

The first collection of Unstoppable Wasp is now available in digital and print. Buy two copies. Maybe they’ll bring it back. Who knows, might be more Unstoppable than it seems to be. 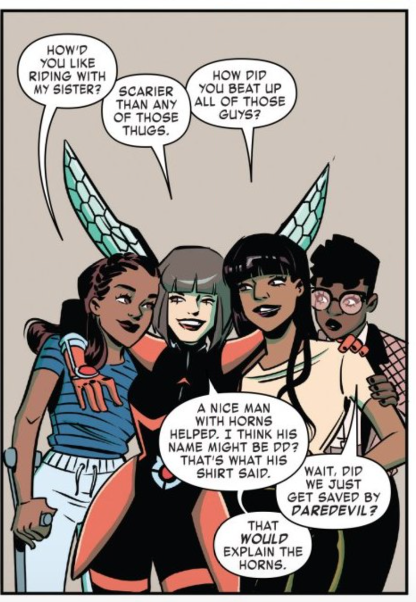