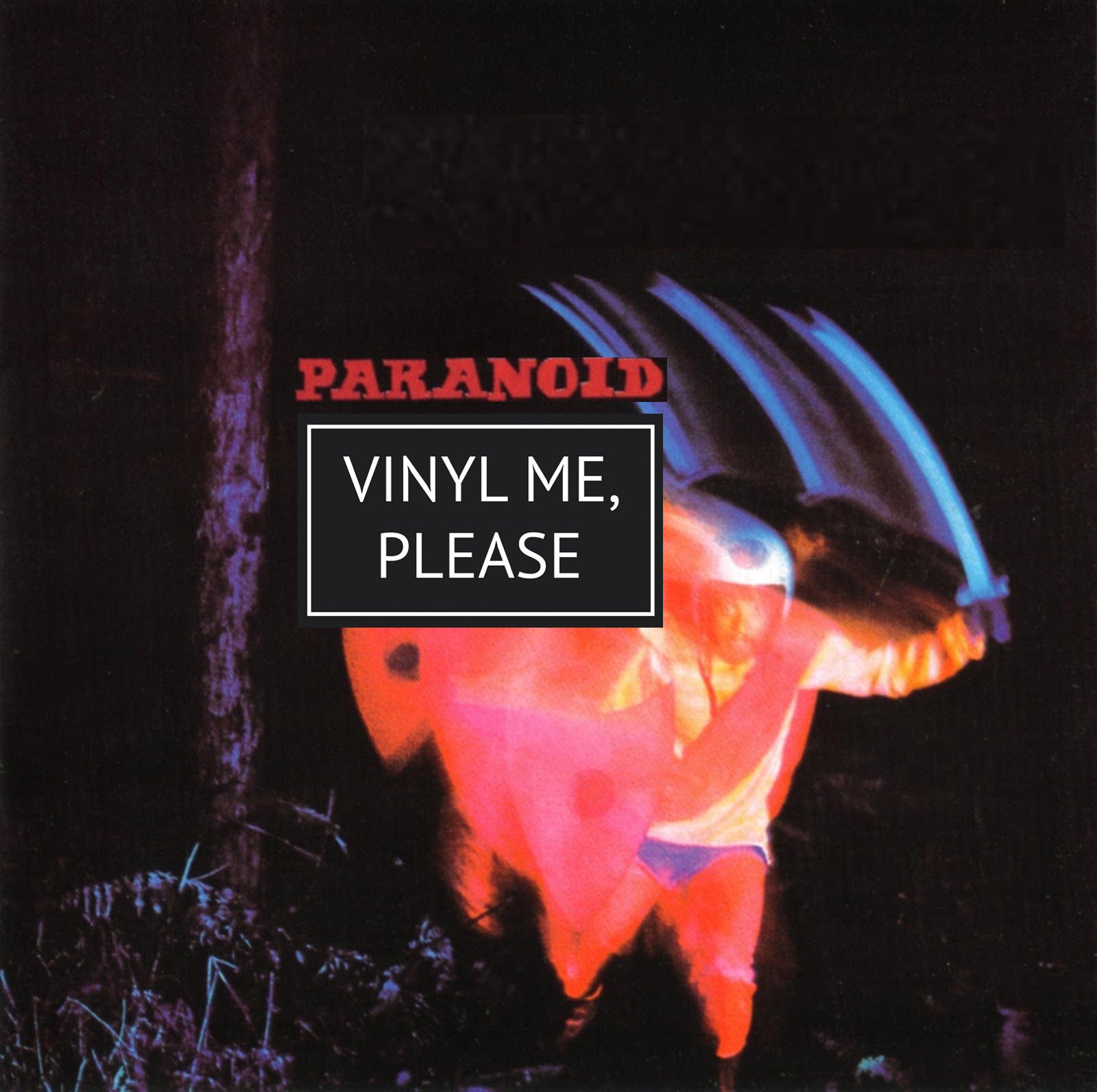 Good things come in 12 inch packages. Delivering limited edition pressings of new and classic albums directly to your doorstep, the mad geniuses behind Vinyl Me, Please operate under a simple philosophy: The Album Lives. With a carefully curated catalog and lovingly assembled album art, the subscription service is more than just a record club … it’s a lifestyle choice for folks who wish Record Store Day could happen every month. And in their living room.

Here’s how it works. Stay with me now, cause this may get complicated. You supply the Vinyl Me, Please crew with $23 a month and they supply you with one meticulously selected album worthy of your time and attention. Oh wait … that’s stupid easy, right? That custom pressing (anywhere from 140g to 180g vinyl) comes in a gorgeously designed sleeve complete with digital download, original 12″x12″ inch artwork, and even an album-inspired cocktail recipe. You’ll also get the VMP weekly newsletter The Standard, featuring music news, playlists, downloads, interviews, and other member-exclusive content. Not enough? The Vinyl Me, Please team gives away free swag at an alarming rate and your name automatically goes on their “nice” list. Still not convinced? How’s access to the VMP members-only online store sound? When the store re-opens on Nov. 16, you’ll have a chance to grab a copy of previous VMP selections from the archives, and you’ll also be able to pick up some additional rare or special edition vinyl. Coming in November, the VMP Member’s Store will feature such gems as Spoon’s Gimme Fiction, Sigur Rós’ Takk, and a sick 8LP Neko Case Boxed Set. Try to contain yourselves.

Yep, the Vinyl Me, Please team have thought of pretty much everything. Nothing left for you to do but submit and sign up. But first, let’s have a look at what’s inside the box this month. 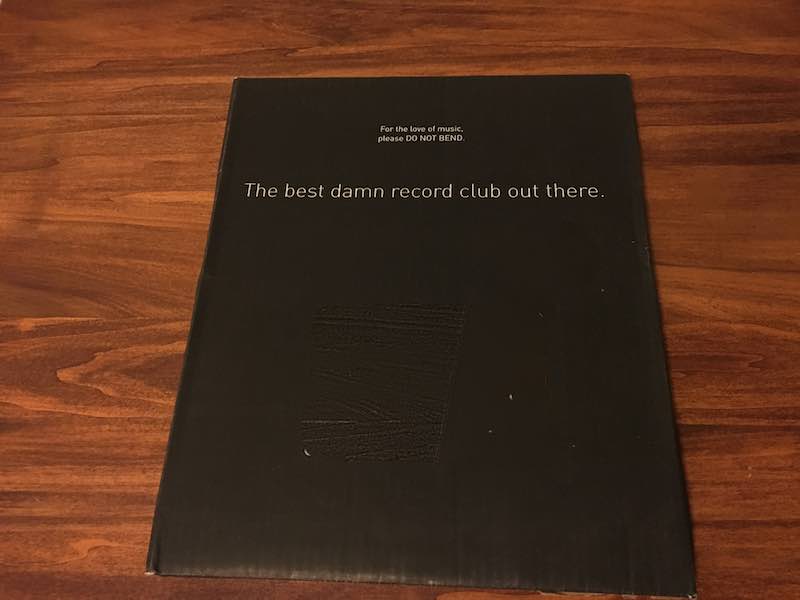 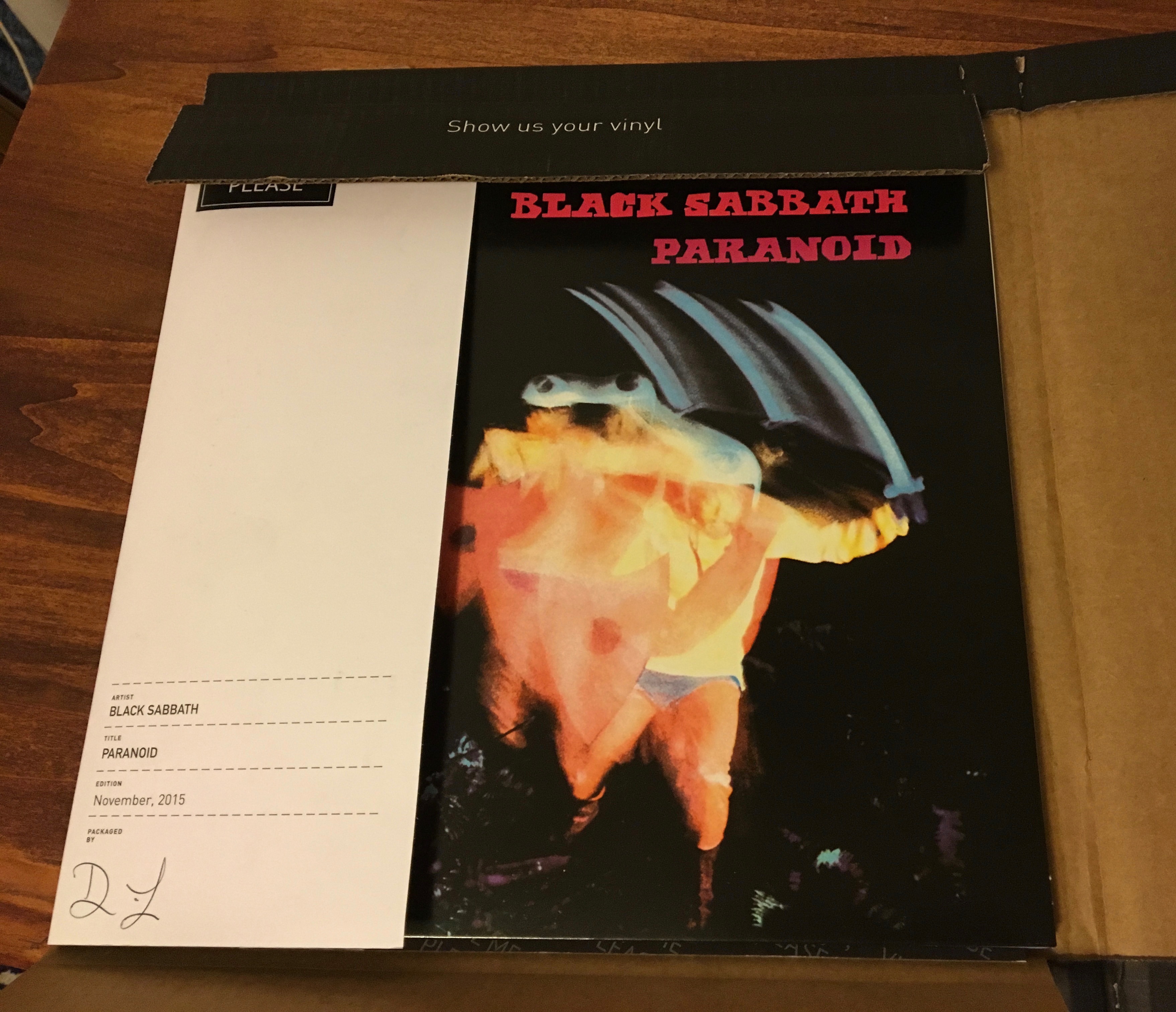 Symmetry is a beautiful thing. The first time I heard Paranoid I had just received the CD from a Time Life Music Record Club. I’d like to thank my mother for helping me sign up for that club and discover rock & roll. I’d also like to thank VMP for sending this re-release (sourced from the original analog tapes!) to my door this month and reminding me what a formidable album this is. For the past 45 years – wow – most of us have only heard Paranoid dissected into a handful of singles on classic rock radio, “Iron Man” and its wild, groaning animal guitars being chief among them. After hearing it for so many years on its own, I’d almost forgotten that it’s the fourth track on this album. And I’d completely forgotten how much more effective that intro is in the wake of the sultry, smoky psychedelia of “Planet Caravan.”

“War Pigs,” “Paranoid,” “Iron Man” … that’s only Side 1 of this masterpiece. With largely forgotten tracks like “Electric Funeral” and “Hand Of Doom,” flipping to Paranoid‘s dynamic, frightening Side 2 now feels like an act of war. That’s no coincidence. Ozzy Osborne (he wasn’t always a mush-mouthed clown) and Co. unleashed Paranoid on the world in the midst of the Vietnam War and the birth of counterculture. They had the moxy to give a hearty “fuck you” to both. Dark, sludgy, and outright maniacal in its precision, Paranoid was rock & roll as the world had never heard it – and has rarely heard since. Regarded as the birth of heavy metal, Paranoid is the sound of rebellion in a time when rebellion was necessary. Listening to it now, decades after its release, I can’t help but think that we could use a few more rebels.

Opening this month’s box is like finding a picture of an old friend you haven’t spoken to in a while. Your mind jumps to a specific time and a specific place and all you really want to do is call that friend up, take them out for a whiskey, and talk about that one time when you … But seriously, I love this album cover and the story behind it. Nice to finally have this one on a 12 inch sleeve. 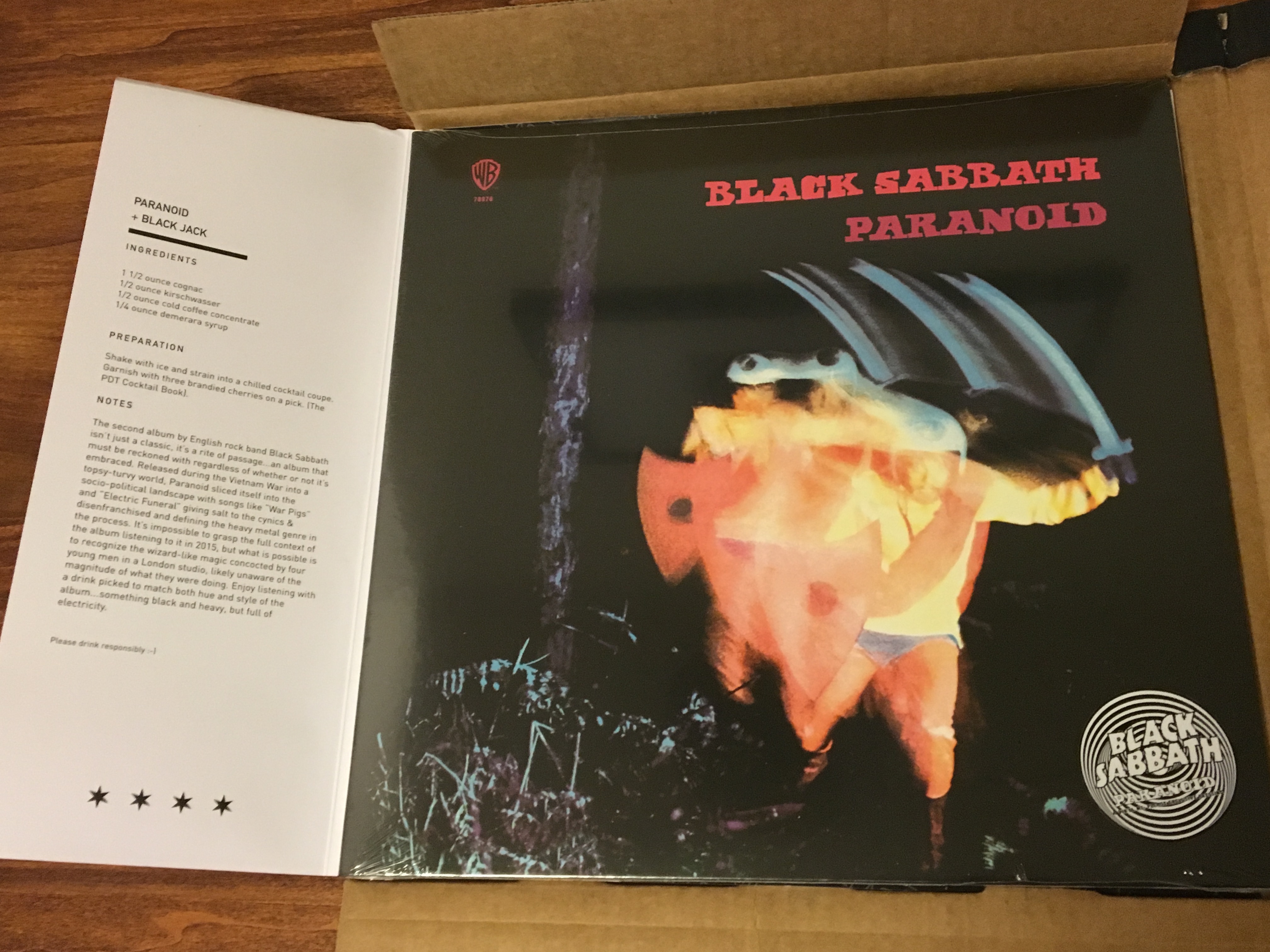 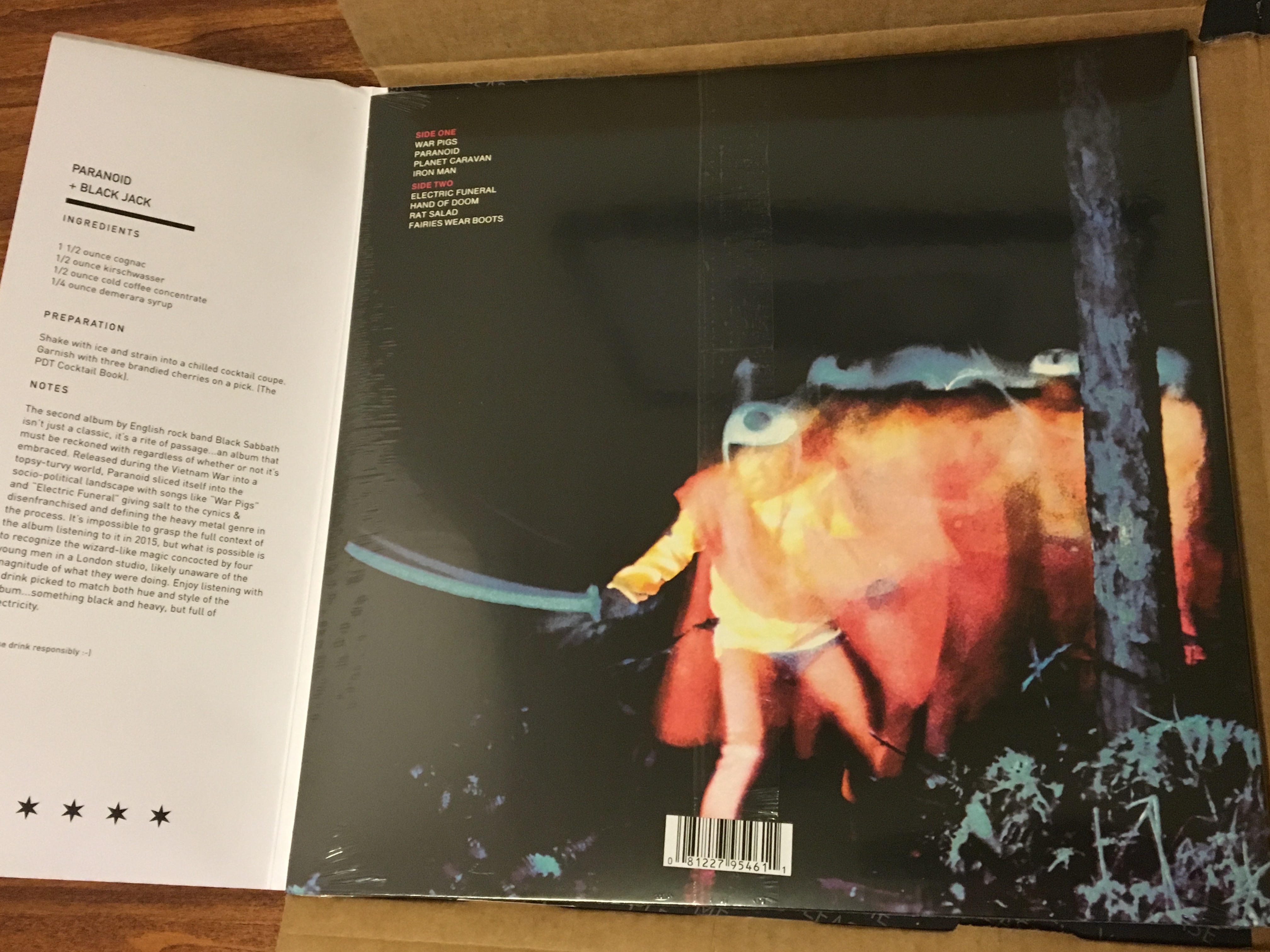 Pay particular attention to the fine print on this all-important little sticker. 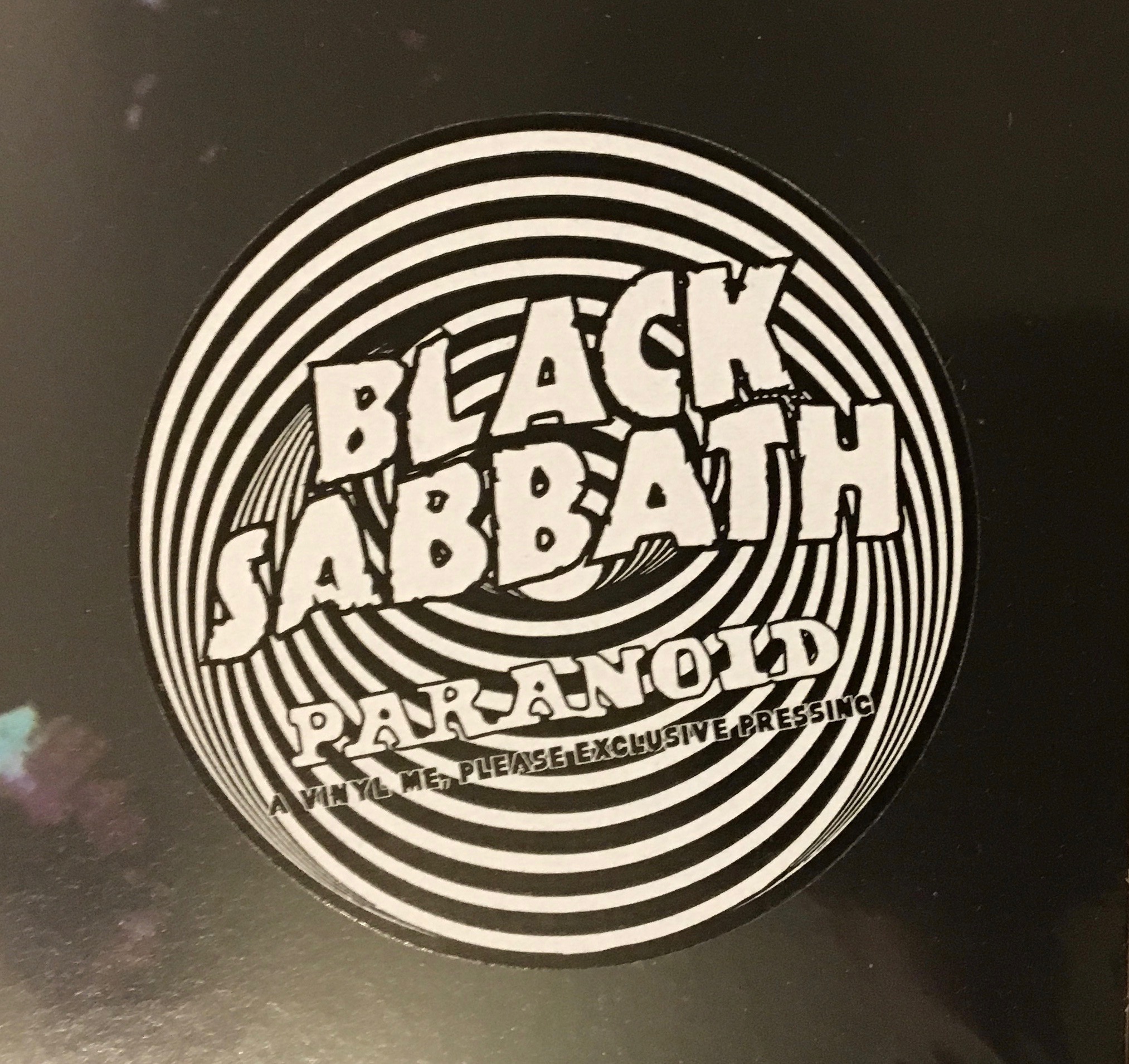 The album comes partially wrapped in an outer-sleeve chock full of important information like the band’s name, the album’s title, month of issue … and even the initials of the person who packaged your disc. Thanks, DL. 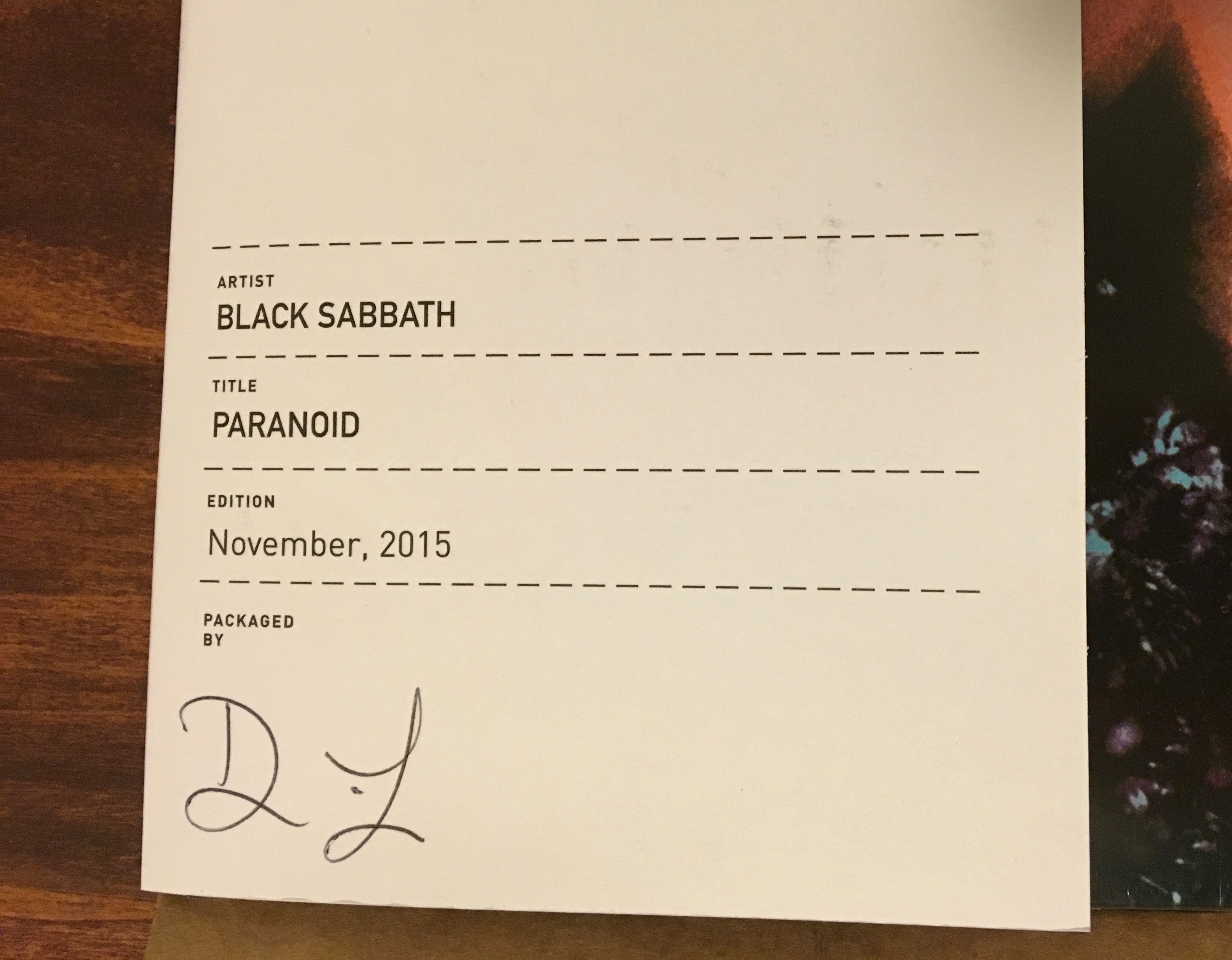 Peel that sleeve back and you’ll find the recipe for Paranoid‘s companion cocktail – Black Jack. It sounds like a tasty beverage, but I was sort of expecting something with whiskey. Oh well. I’ll have to taste this one and hope that the VMP team proves me wrong. 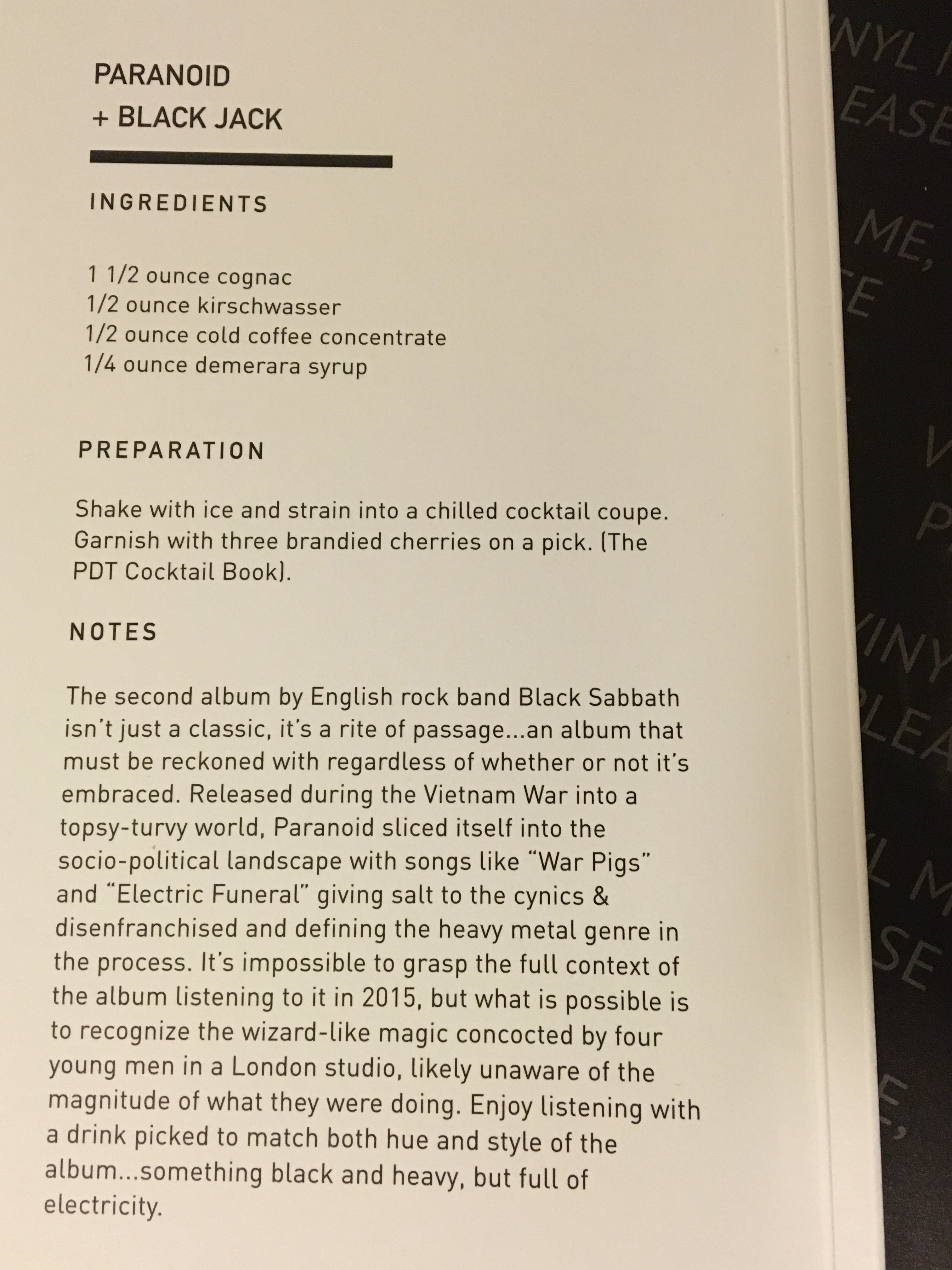 Removing the record from this half-sleeve reveals two hidden gems – a lovely bit of poetic rambling from VMP’s Tyler Barstow and an original 12″x12″ print from Pacific NW artist Tim Manthey – both inspired by the band and their album. 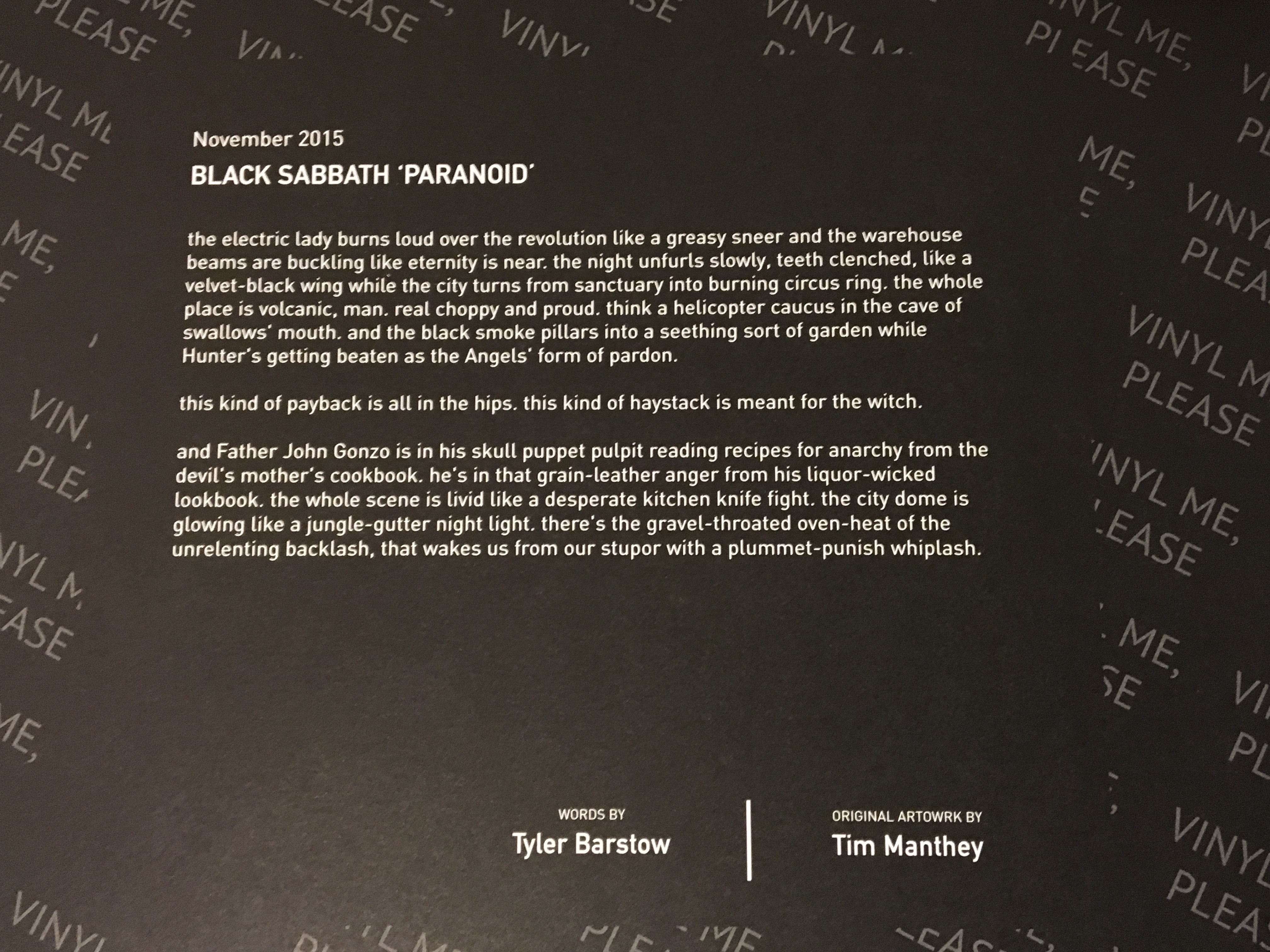 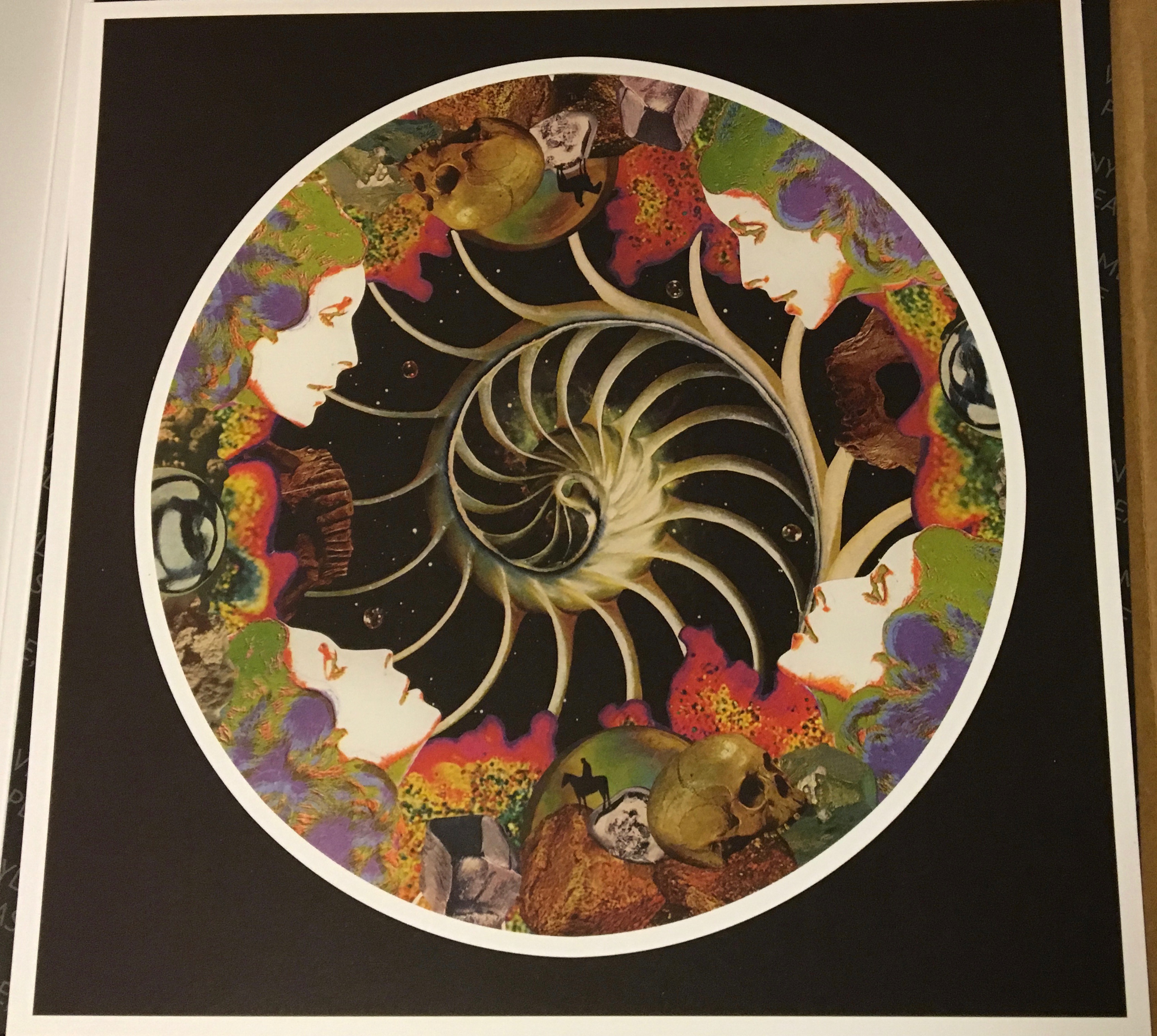 And all of this before you even peel the shrink wrap off of your record. There are fewer extras in this month’s box, but this is Paranoid we’re talking about here. Who needs that many extras? You do still get that killer gatefold sleeve that features the band’s now prophetic photo. With Ozzy all by his lonesome, there’s an obvious nod to the frontman’s burgeoning icon status – not to mention the band’s growing inner turmoil. 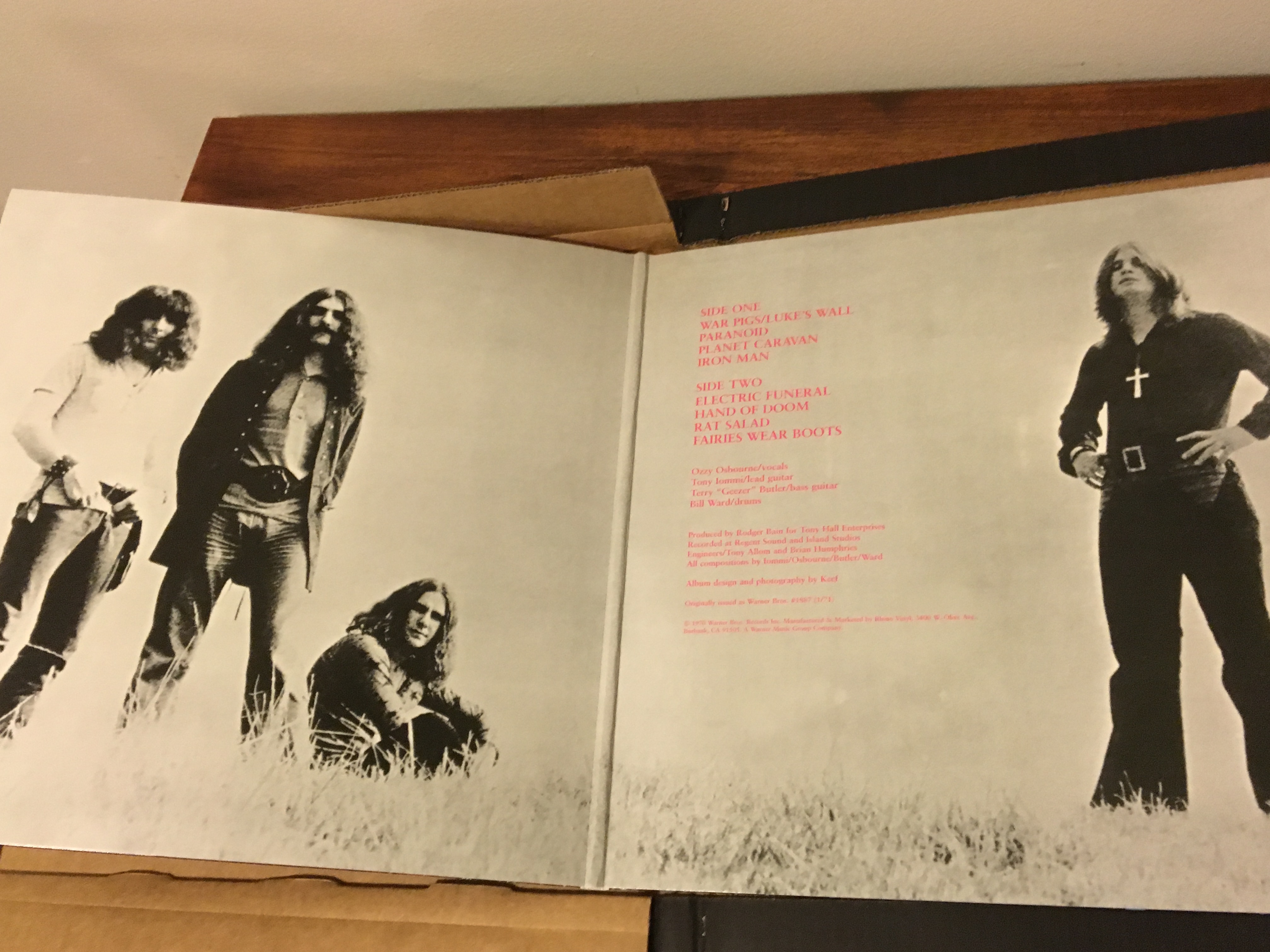 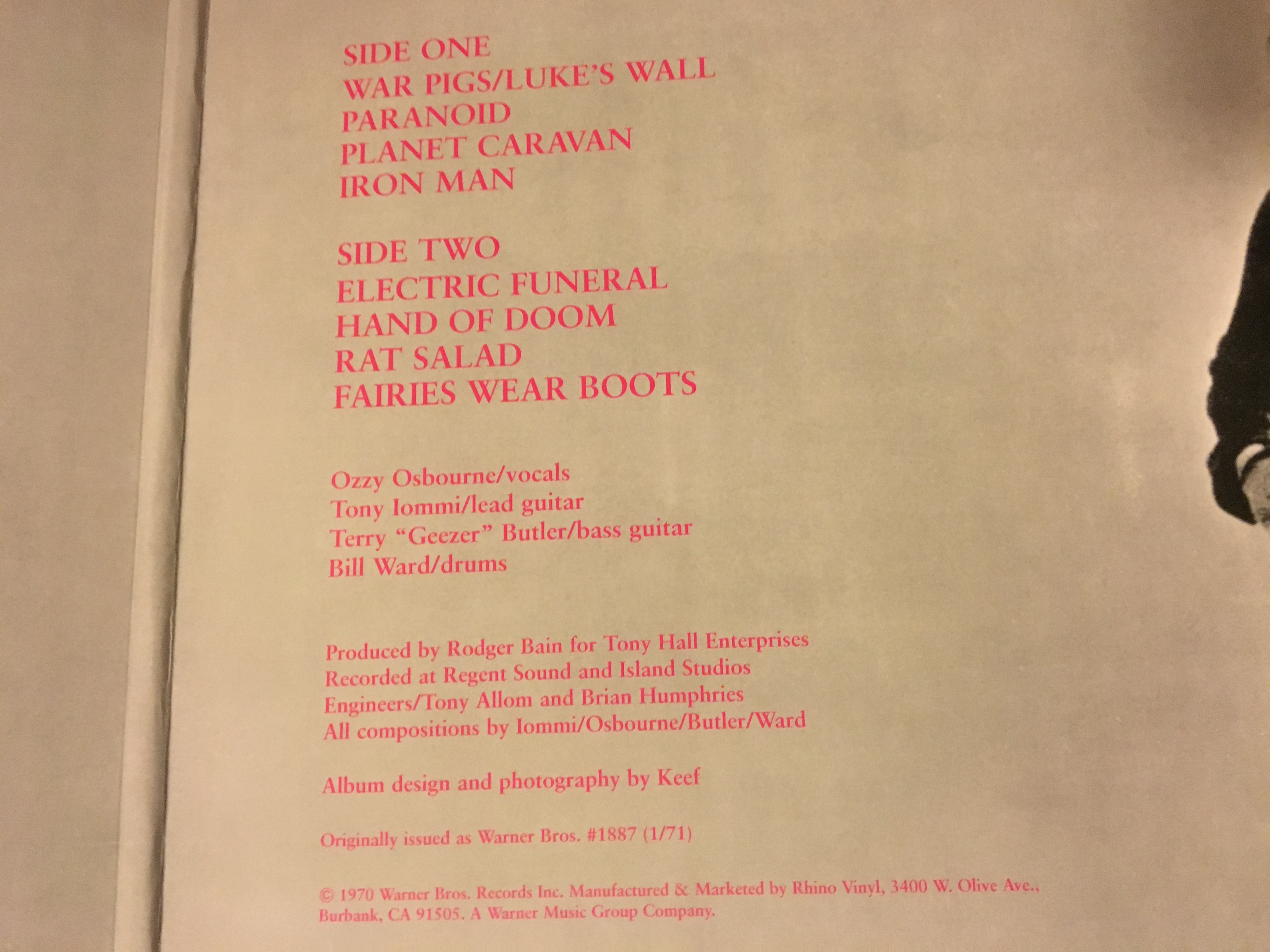 Finally, removing the record from its sleeve, we find that … “It’s purple! Its aura is purple!” God I love some colored wax. If you don’t believe me just ask the super nice dude that owns Long In The Tooth Records. 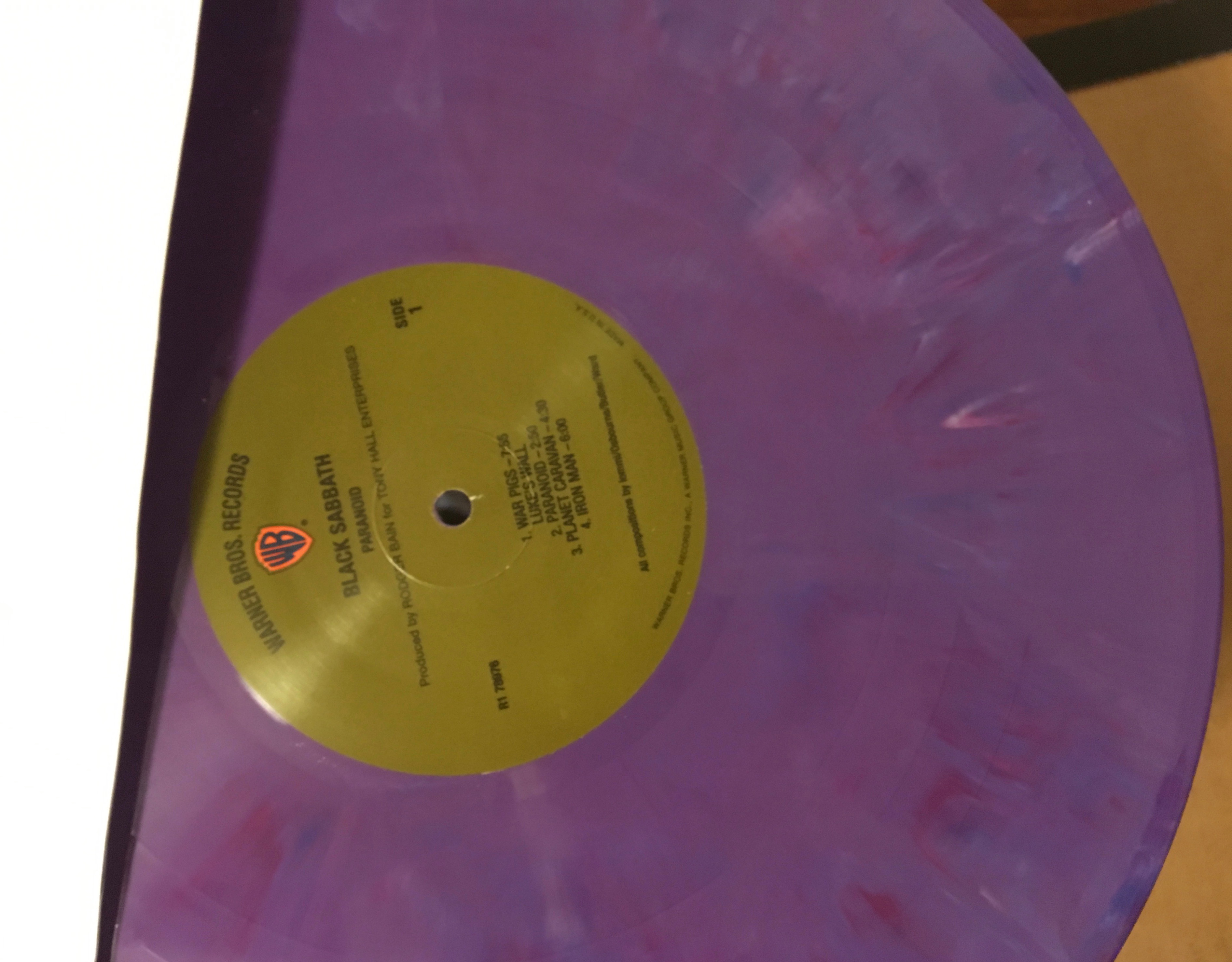 And damn does that marbled purple wax look great on your turntable. 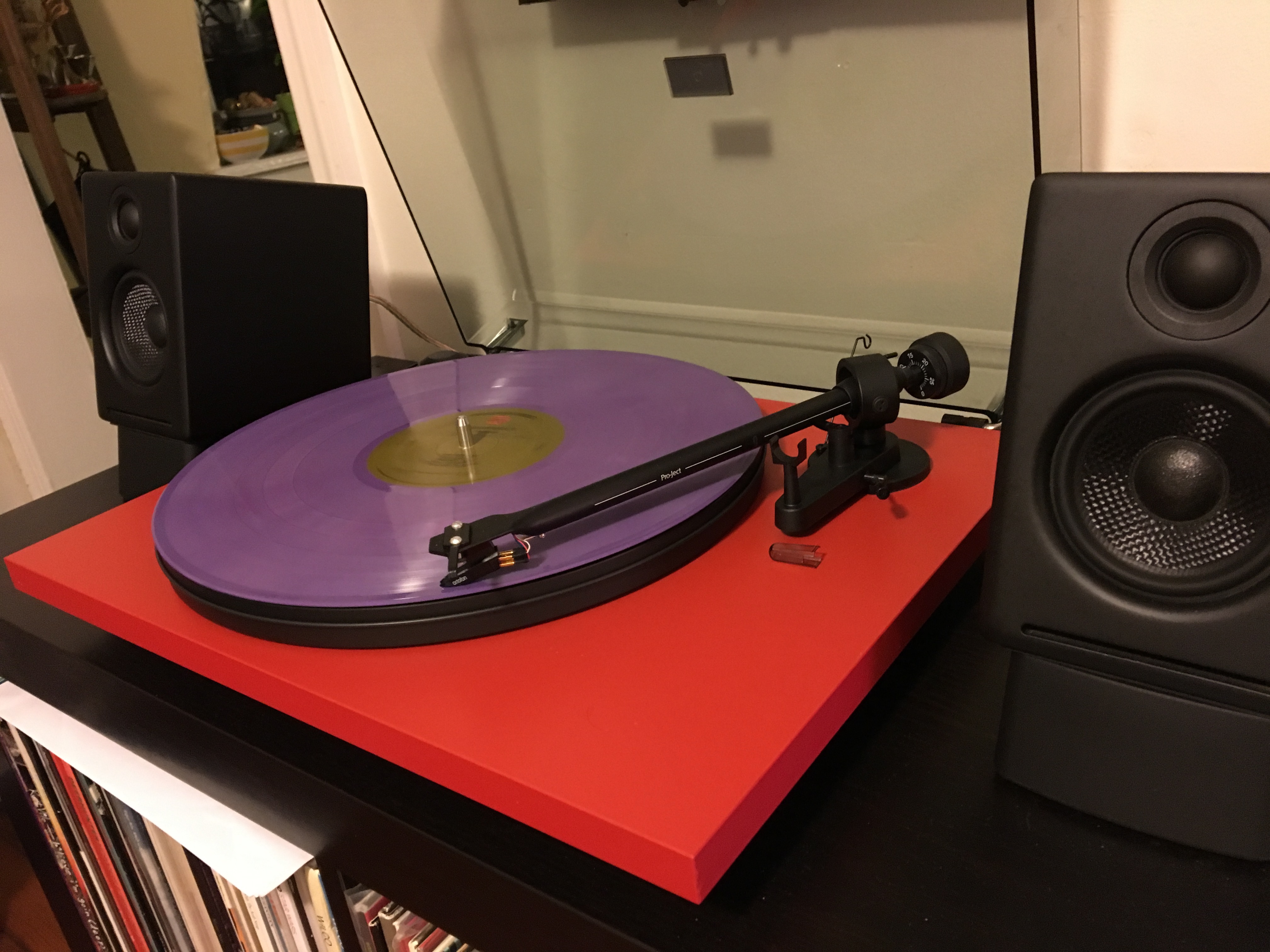 How’s it sound? Like drinking scotch with a demon at the seventh gate of hell … just how Ozzy and “Geezer” and the boys intended.

Love em or hate em, Black Sabbath were a fearless rock & roll band and Paranoid is a fearless rock & roll album. For those of you who already know that, give the VMP team a major hi-five for choosing this album. For those who have never heard it, get ready to hear the world of rock in a whole new way. Paranoid is more than just a rock album, it’s a statement from a band at its peak giving the finger to a world in flux. Having the chance to listen to this classic the way it was intended is part of what makes vinyl so much fun – and what makes Vinyl Me, Please so essential. Sure, discovering new music is a gas, but it can be as much fun to rediscover a classic. Kudos to the VMP team for understanding that and re-releasing this rock monster on the world. Of course, you may not always love the music VMP sends your way, but it will always be an experience … and that’s the whole point of music.

A big THANK YOU to our friends at Vinyl Me, Please for sponsoring this subscription. Don’t forget to check out the official Vinyl Me, Please website and sign up to get some amazing vinyl delivered right to your door each month!