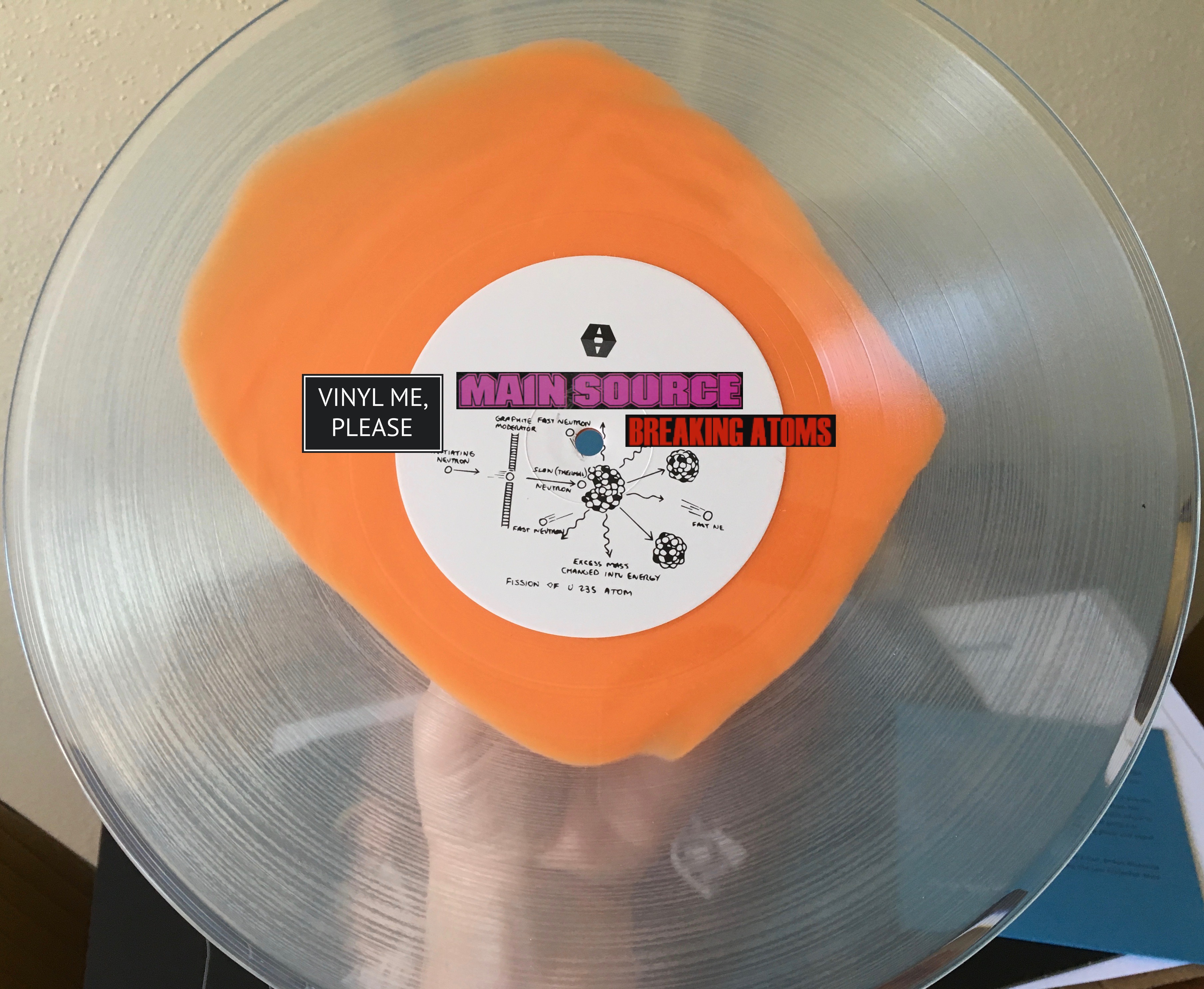 Here’s how it works. You send Vinyl Me, Please $23 a month and they send you one meticulously selected album worthy of your time and attention. Easy, right? Each custom pressing (often in color!) also comes with special features like original artwork and even a recipe for a companion cocktail. Best of all, you get access to the VMP online store. That means you’ll have a chance to grab a copy of previous VMP selections from the archives – including January’s release of Panda Bear’s esoteric classic Person Pitch – plus additional rare and exclusive releases.

The store is open. Once again, it’s stocked to the brim with gush-worthy releases. Like a limited pressing of Volcano, the new album from neo-psych overlords Temples (peaches & cream covered vinyl, hand numbered, ltd. to 600 copies) or a purple & white tie-dyed pressing of Strand of Oaks’ latest Hard Love (foil stamped, ltd. to 500 copies). If those aren’t tripping your switch, you might want to scoop up a copy of psychedelic krautrocking Moon Duo’s latest, Occult Architecture Vol. 1 (black & white marbled wax). There’s a song on that album called ‘Cult Of Moloch’ that is flat-out sick. Sick is just the word to describe sound alchemist Fred Thomas’ latest Changer and, well, there’s a gold pressing of Sly & The Family Stone’s Anthology that’s a must own for anyone who claims to love music. Oh, did I mention that there’s new releases from Ryan Adams and Dirty Projectors in stock this month? ‘Cause there are.

Trust me, there’s more. But you’re gonna have to sign up to find out. If you’re peckish about relinquishing control of your record collection over to complete strangers, just know that VMP’s Swaps Program is in full effect. That means you can flip any VMP pick you don’t like for something a little more your speed. And if you want to get up close and personal with fellow VMPers to talk it over, keep an eye out for the VMP road-show, The Spins. They may be coming to a bar near you in the future. My advice? Don’t overthink it. Do yourself a favor and sign up today.

Right then, let’s see what’s inside this month’s box, eh? But first, take a moment to dig on the slick new VMP packaging. 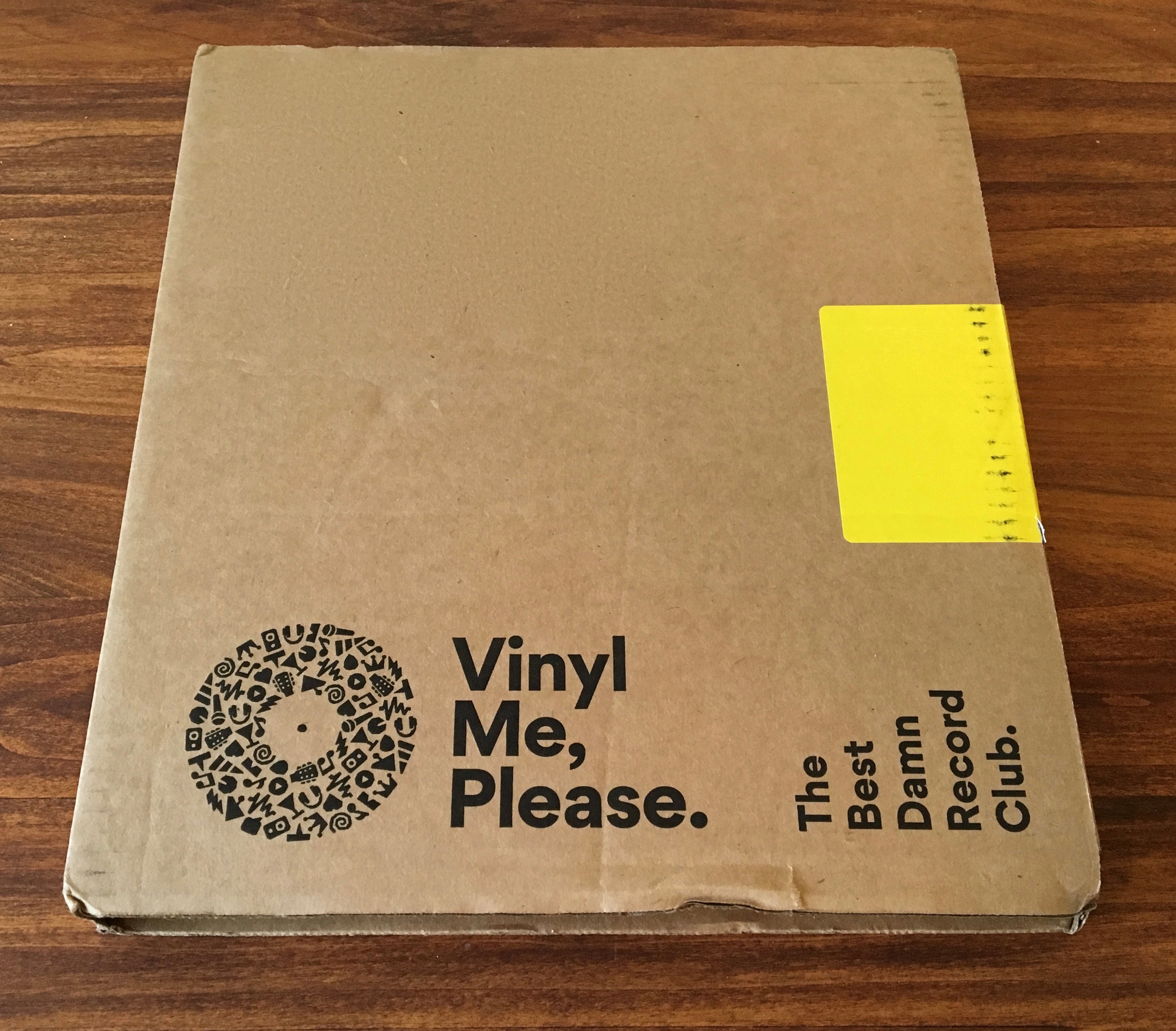 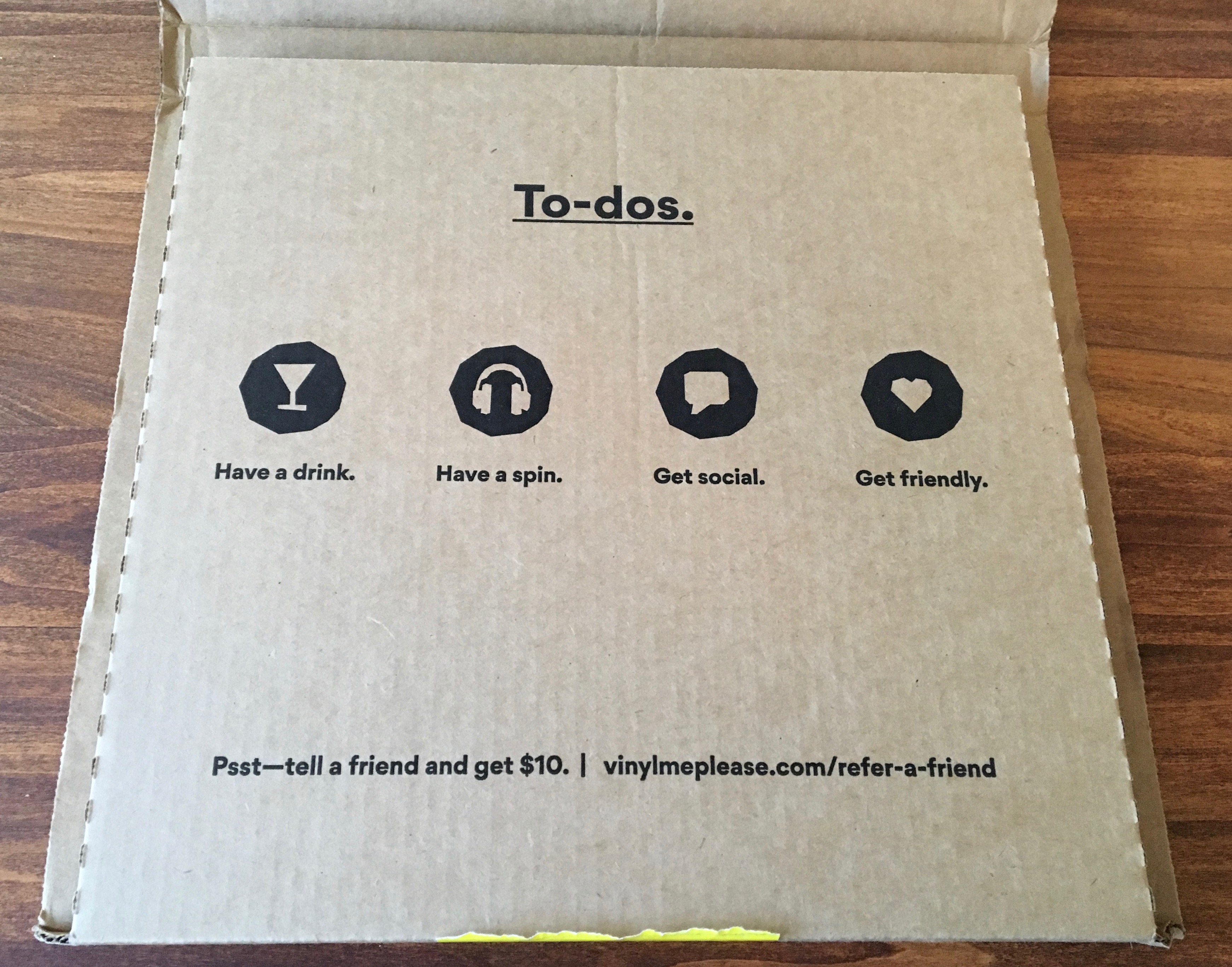 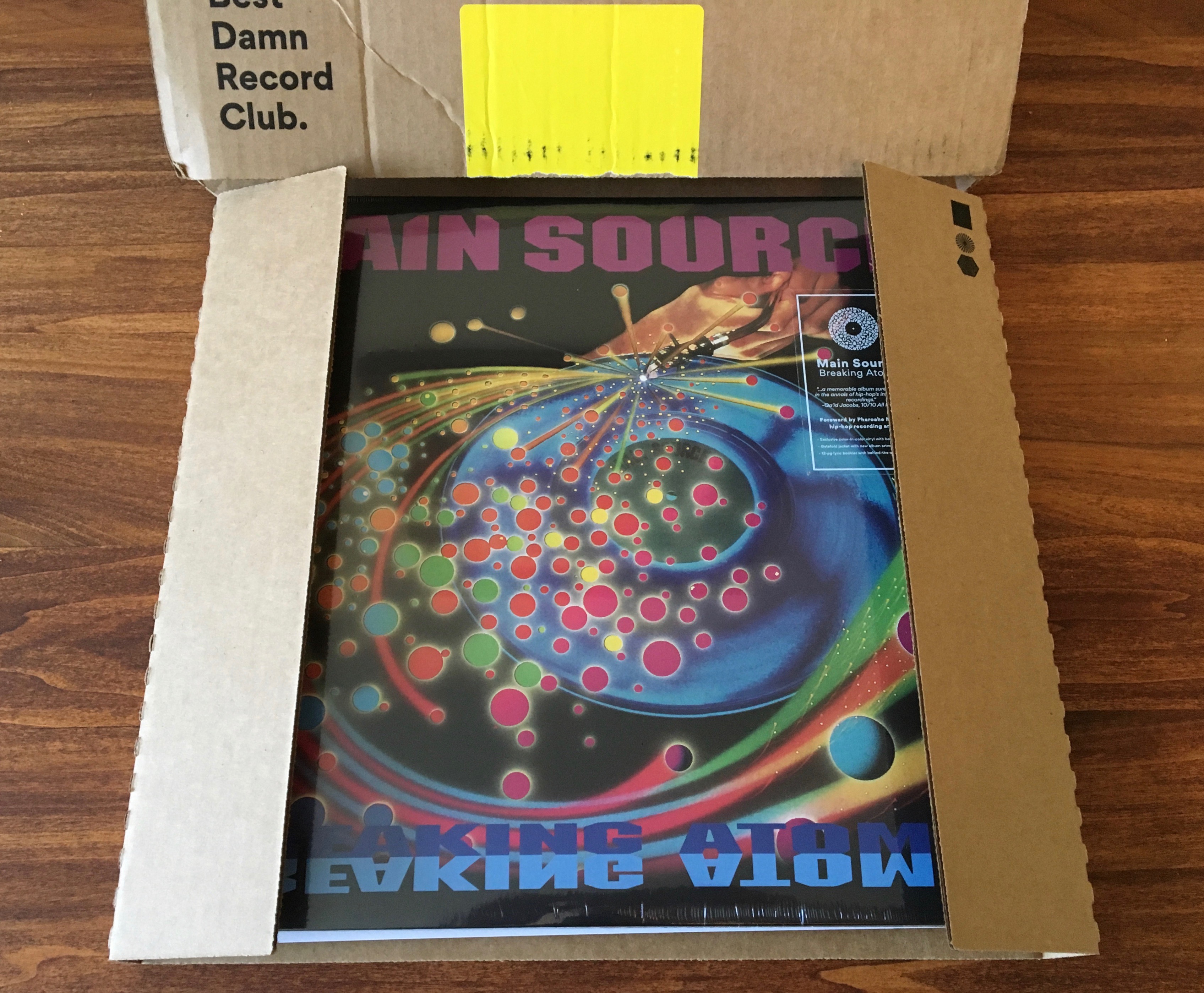 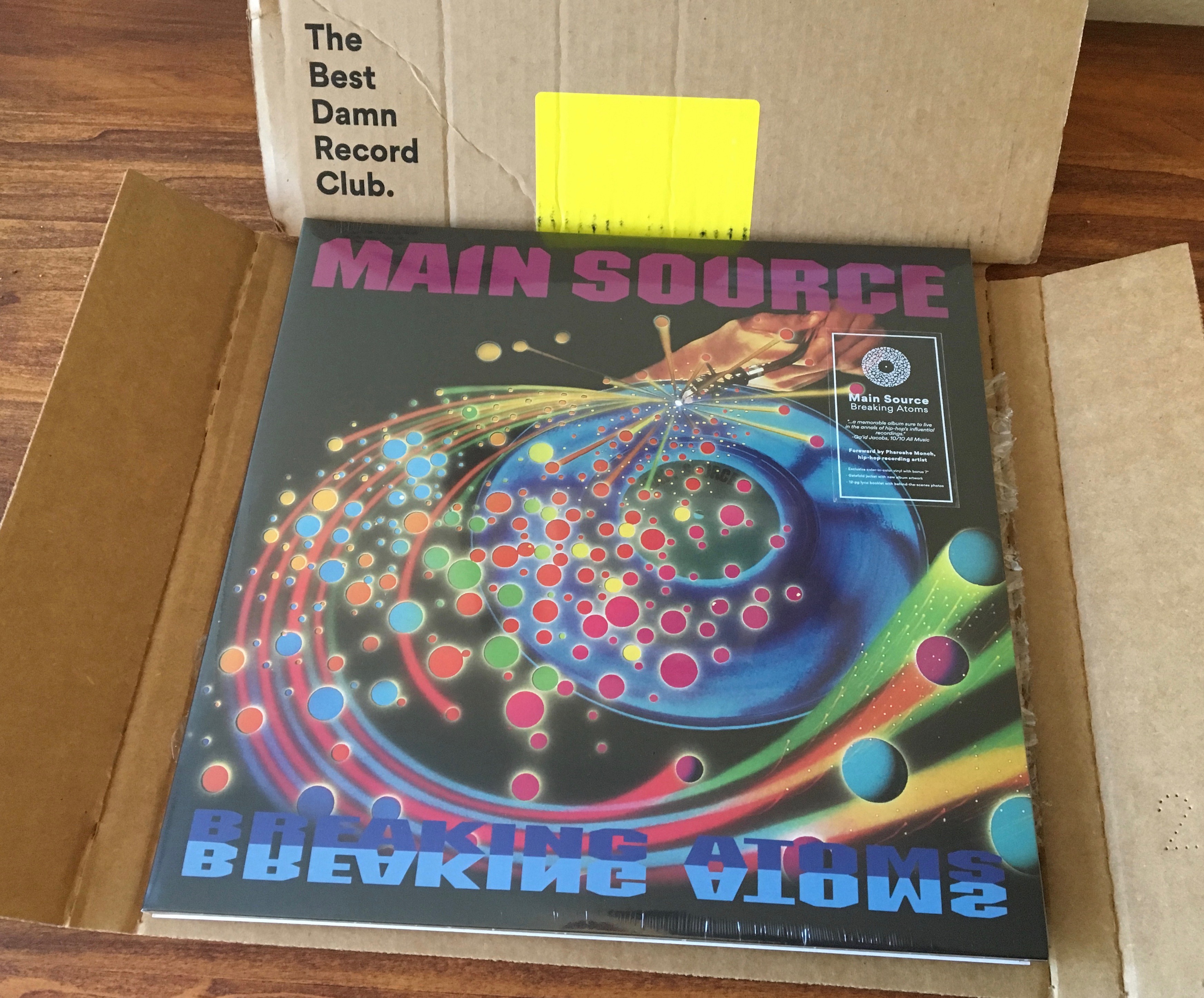 Public Enemy. Beastie Boys. Run D.M.C. A Tribe Called Quest. KRS-One. LL Cool J. Wu Tang Clan. Those are some of the biggest names in hip hop history. And they all broke through in New York during the late ’80s and early ’90s. That period in the New York music scene is commonly referred to as ‘The Golden Age of Hip Hop’. I won’t claim to have known that info on my own. I Wiki’d it while researching this month’s VMP release. That search didn’t turn up much. Main Source are barely even mentioned on the Wiki page. Even their own Wiki feels a little light in the information department. Which is odd, ’cause a lot of people hail their debut album Breaking Atoms as an absolute classic from the era. And that it marked the first recording of a little known rapper called Nas. I didn’t know that either. I read it on the VMP website. So the question I kept asking myself while researching this piece – the question I first asked when Breaking Atoms was announced as the VMP AOM for February – was this, ‘Who is Main Source?’

Shorter answer – Main Source is the one ‘Golden Age of Hip Hop’ group you really should’ve heard more about.

I was confident that second statement would hold true 14 seconds into ‘Lookin’ At The Front Door’. About the time a funky ass bass line drops over the action and the song lays out the basis for the jazzy head-bobber that follows. Then Large Professor takes the mic and the track becomes an introspective lament to good love gone way wrong. As I listened to the beat flow and the rhymes unfold I kept thinking to myself, “this isn’t what I expected.” I had that same thought at some point in every one of the 12 tracks that make up Breaking Atoms. Those 12 tracks unfold like a blueprint of NY hip hop of the time. There’s bluesy thumpers like ‘Snake Eyes’ that feel like Wu Tang before there was Wu Tang. And there’s scratch-heavy jammers like ‘Large Professor’ that borrow from Terminator X without emulating like Public Enemy. You’ll hear more of that Public Enemy influence in “message forward” chillers like ‘Just A Friendly Game Of Baseball’ and ‘Peace Is Not The Word To Play’.

But Large Professor & Co. are not out to pay homage on Breaking Atoms. You might hear influences of other acts, but Main Source has a sound that’s all their own. ‘Scratch & Kut’ is a blindingly original experiment in free form production that would hold up to any DJ work of the era. ‘He Got So Much Soul (He Don’t Need No Music) brings funk to the hardcore realm with flow and energy to burn. And ‘Live At the Barbeque’ is an all-out party jam that should live in your backyard for every summer until the end of time.

Breaking Atoms is an album that should live on your turntable for a little while too. Yes, it’s an album of its time. But you’re likely to find most of the music on Breaking Atoms as relevant to today’s America as it was 25 years ago. Listening to those tracks is a captivating experience … a complex study in style and form. It’s gritty and poppy and poignant and pungent. It wreaks of the real world pain and experience of young black men struggling with themselves and the unforgiving world around them. Young men who had no choice but to drop a beat, pick up a mic, and speak the only truth they knew. That’s who Main Source is. Props to you if you knew that already.

Ok, the album is called Breaking Atoms, so that cover art should be self-explanatory. But yeah, that’s kinda what it feels like when you drop the needle. 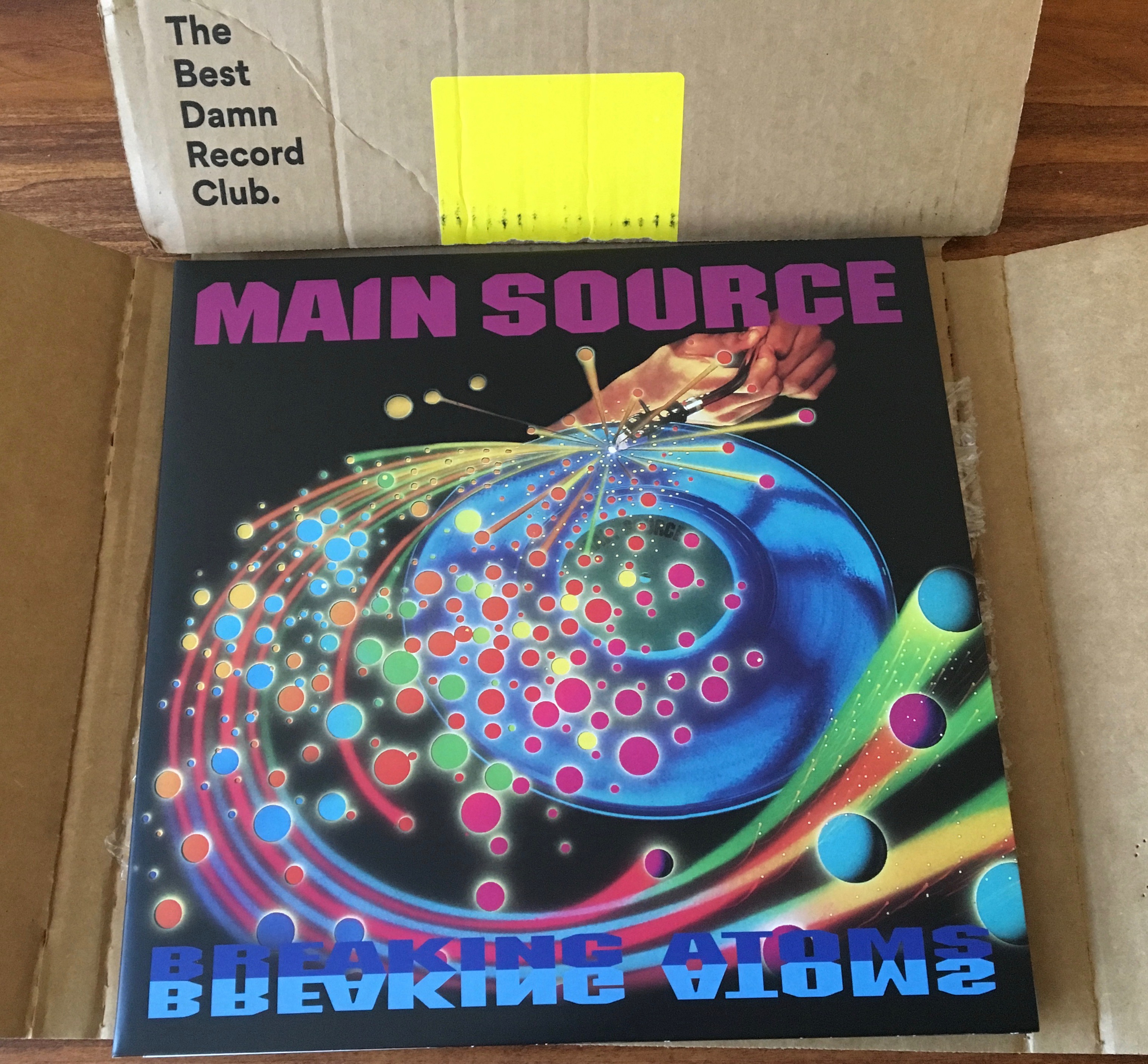 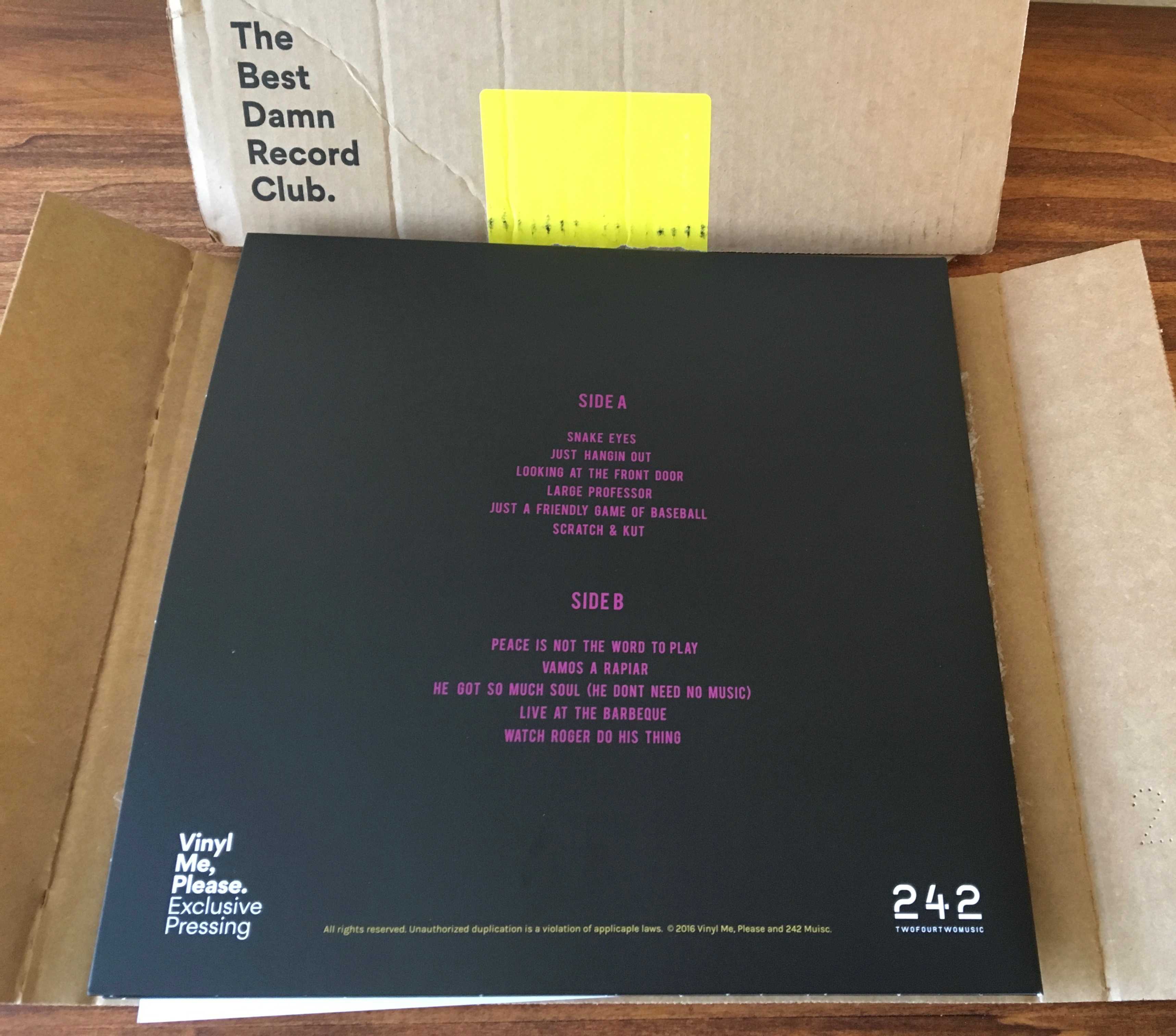 Make sure to note that little bit of info in the bottom corner there. 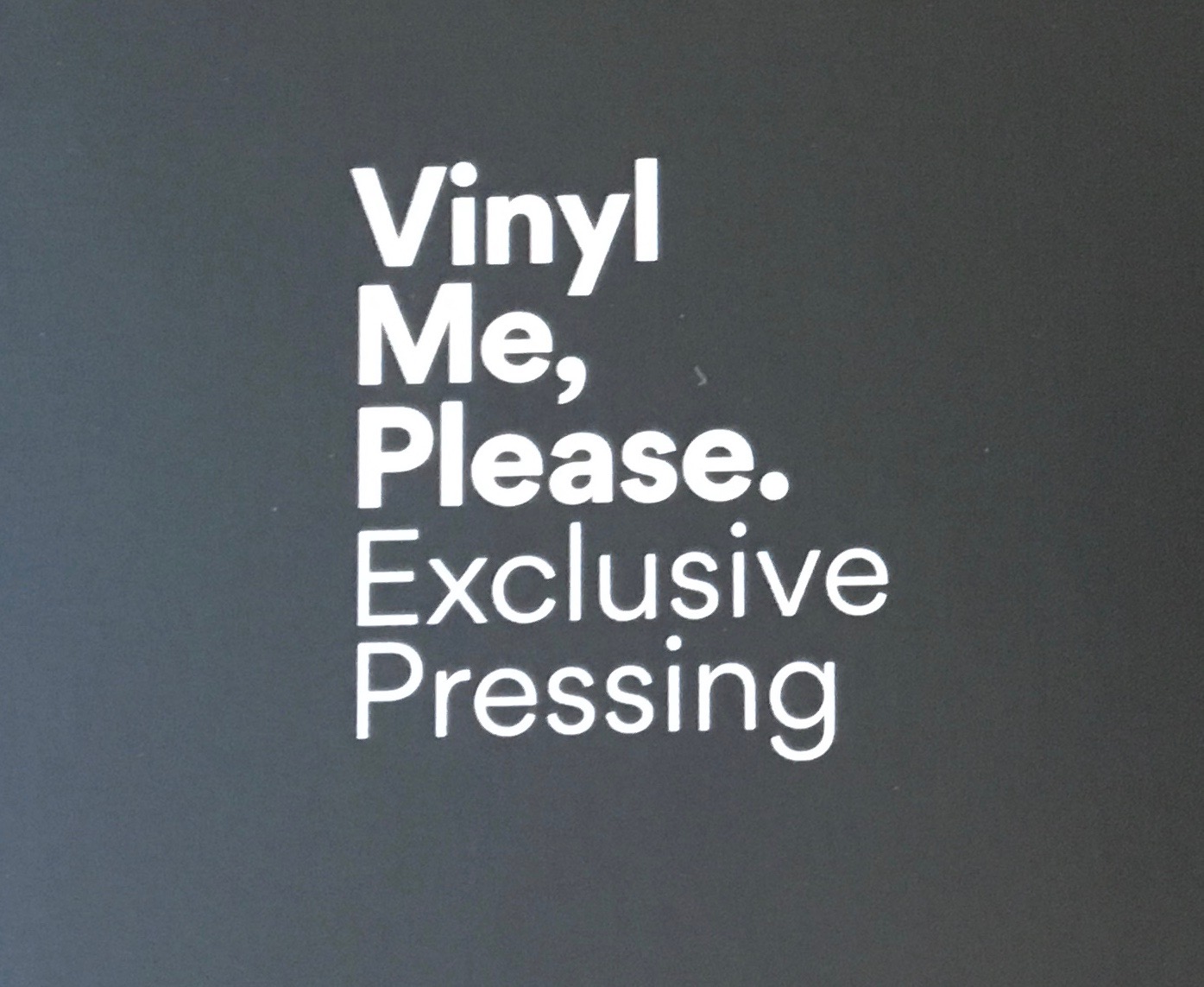 Check this little sticker too before you rip open that plastic. 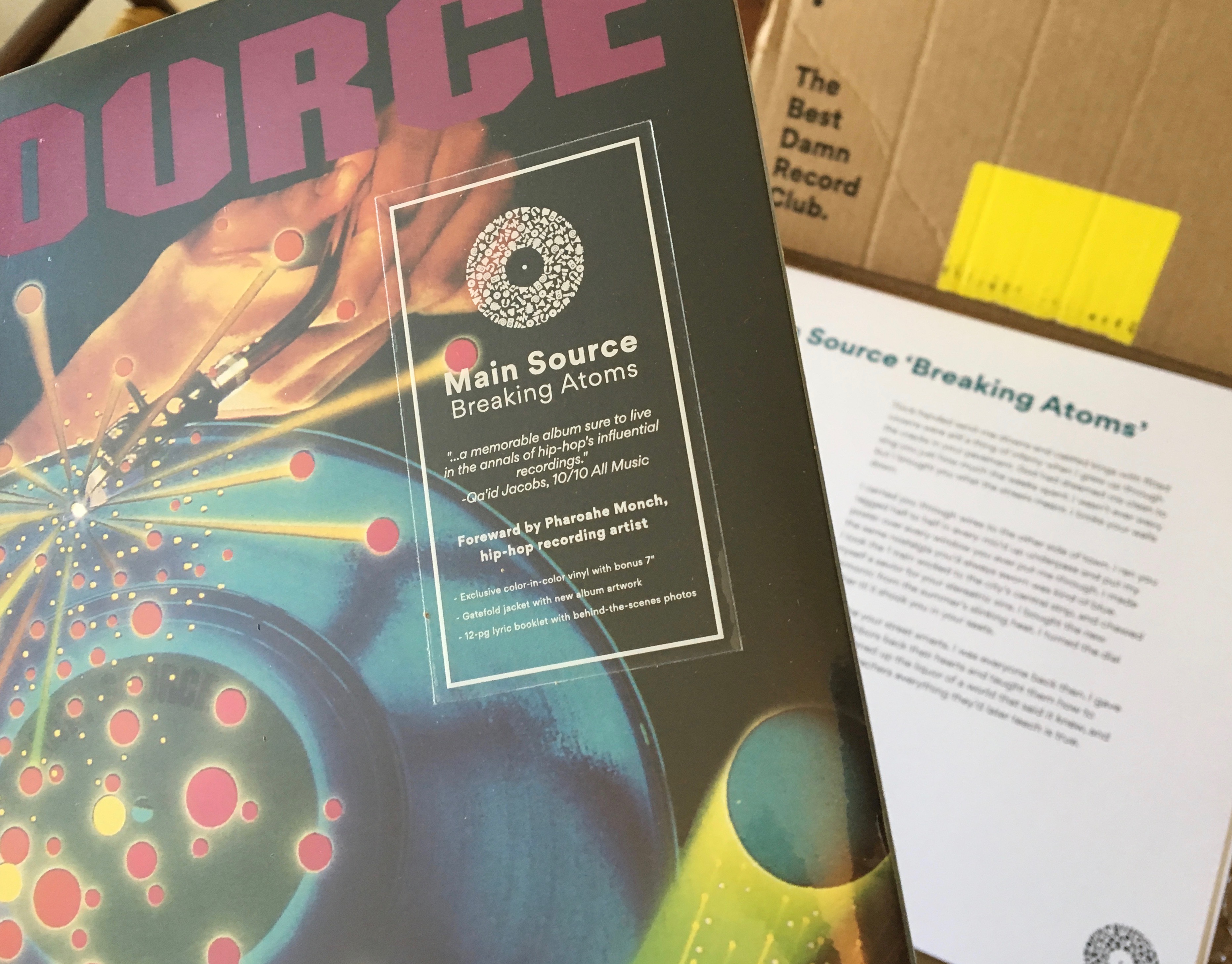 Now, let’s get digging. ‘Cause there’s lots to uncover in this months’ box. Like a lovely bit of rambling from VMP’s Tyler Barstow. 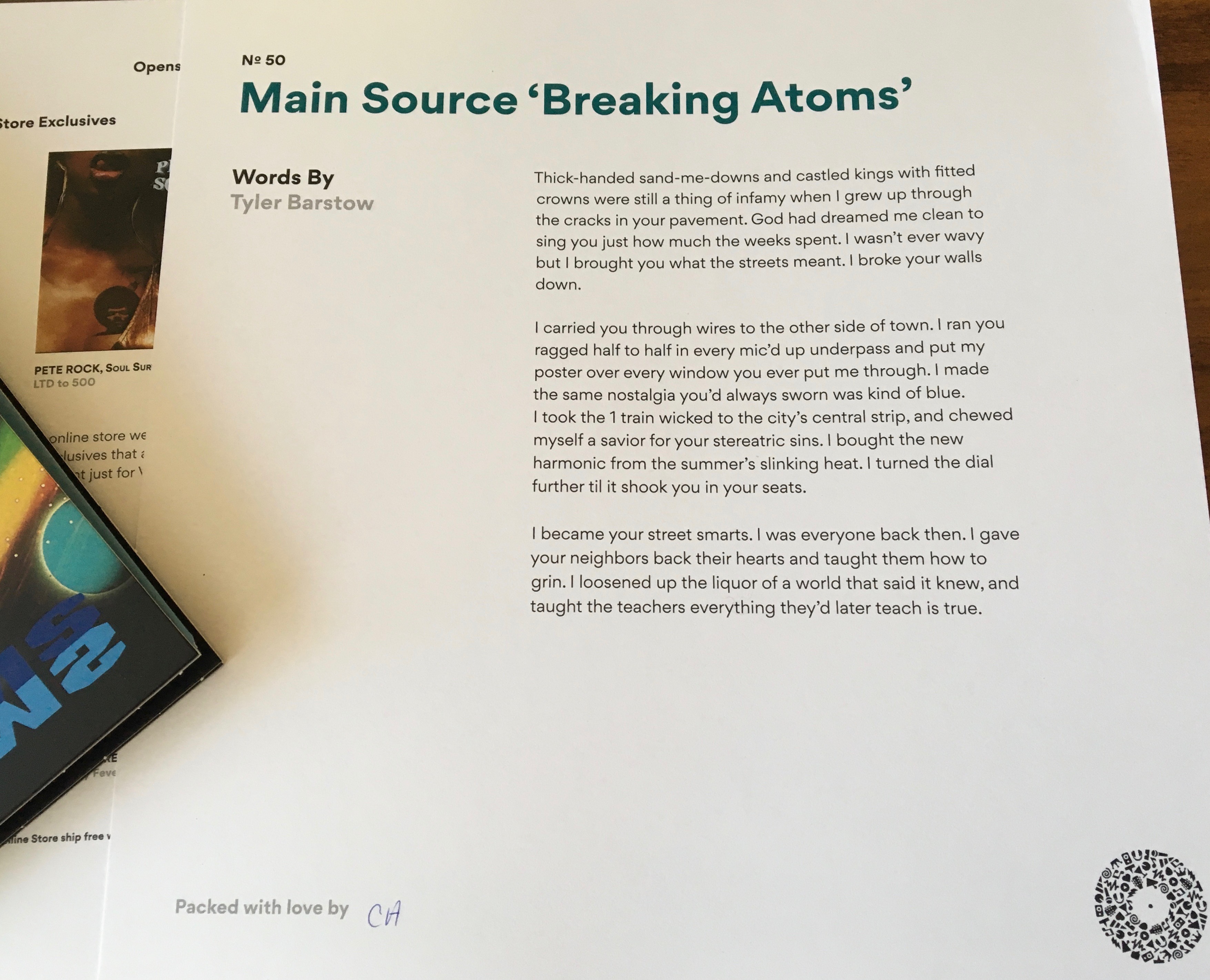 Check the bottom of that slip, folks. I’d like to thank Team VMP for getting back to having Staffer’s initial the boxes they packed … ’cause I’m a big dork and that means a lot to me. Anyway, thanks for the love CA. 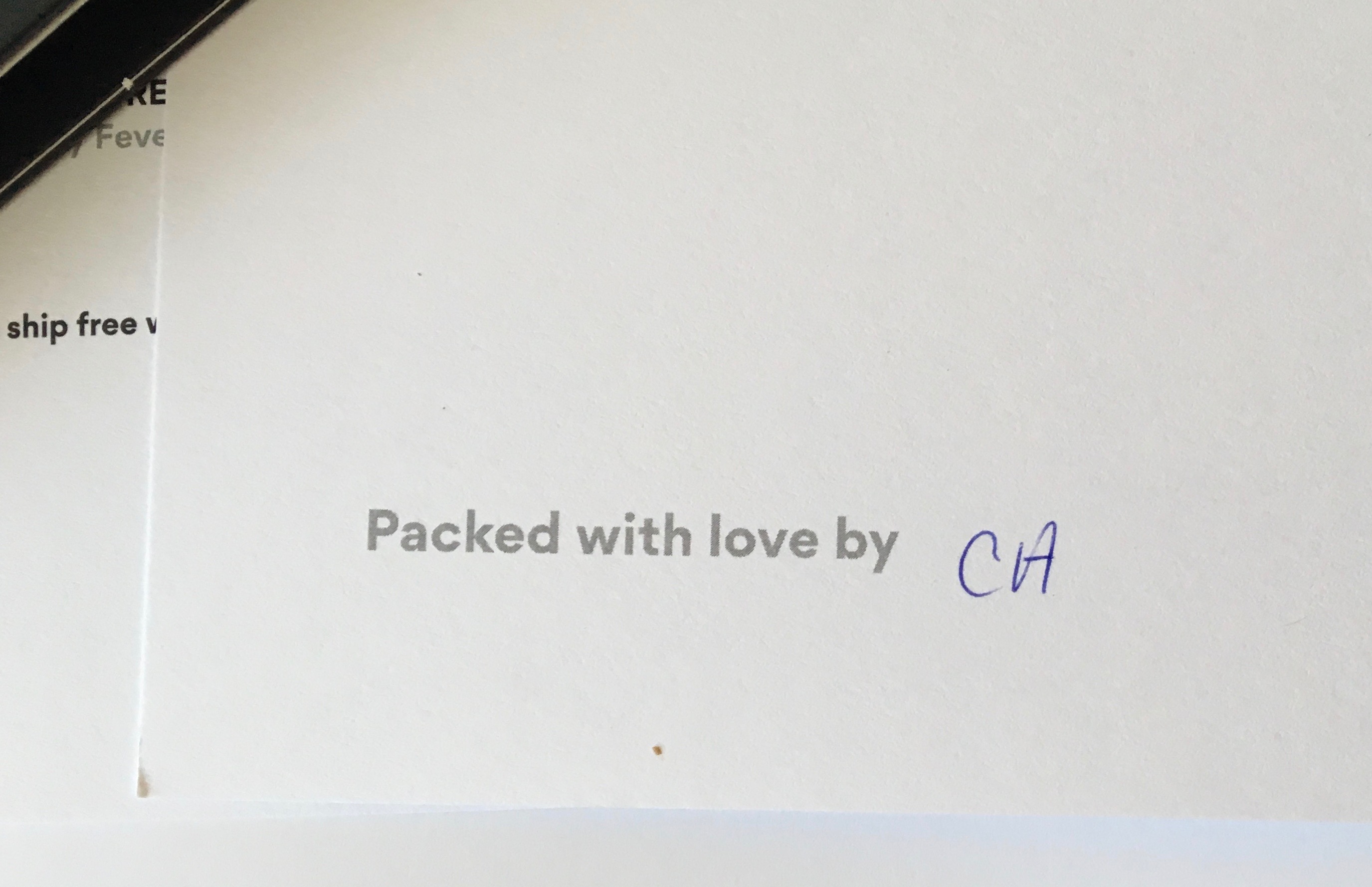 Make sure you flip that slip over too. Otherwise you might miss this month’s companion cocktail – The Whole Shebang. It comes via Caitlin Bixby of KOVAL Distillery, who also explains how she came up with ‘The Whole Shebang’s’ recipe. It has Gin in it. So it should be quite tasty. 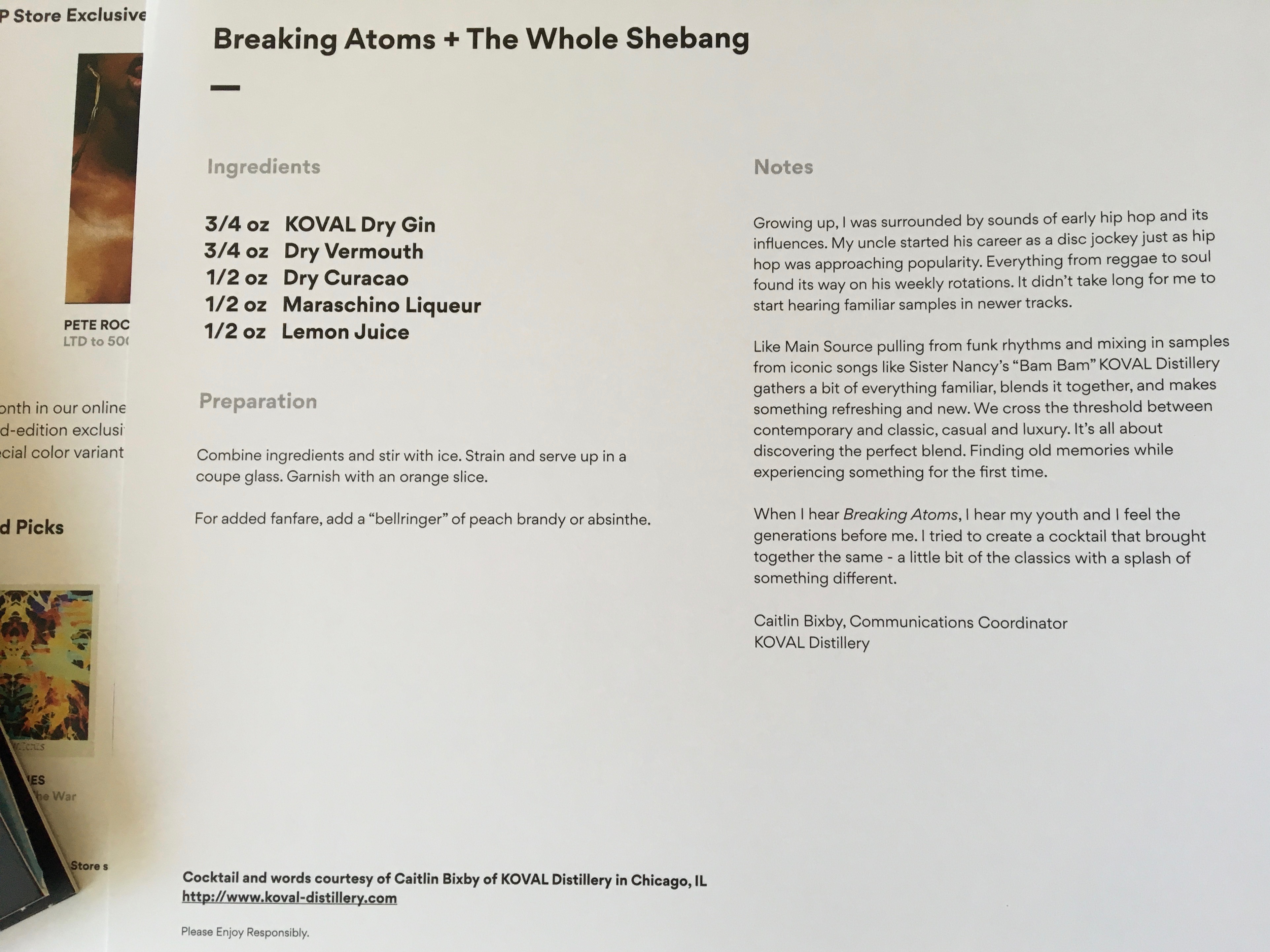 Don’t forget to have a gander at the 12″X12″ print from artist Xavier Payne (AKA XPayne). It’s a ’90s graphic art masterpiece. 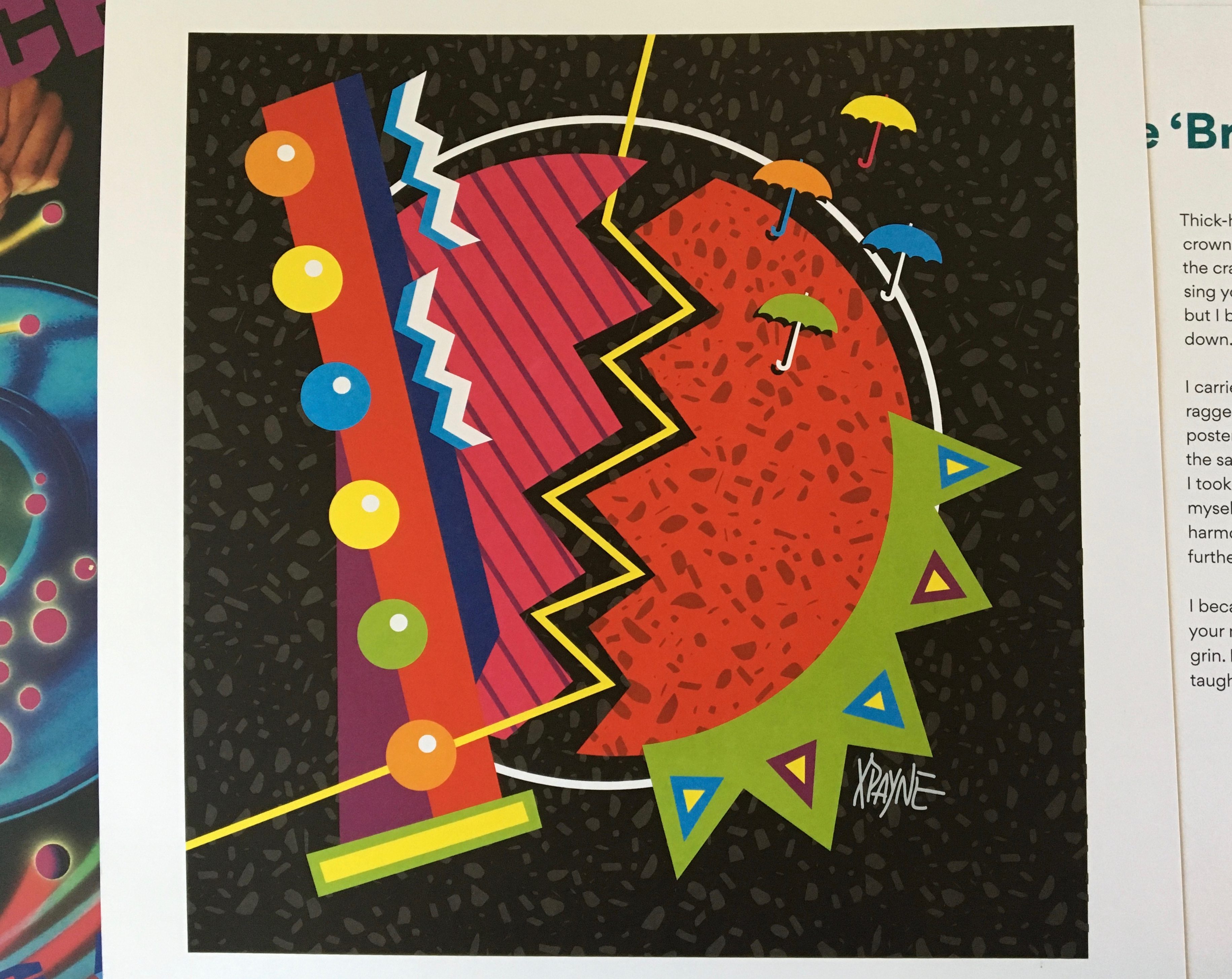 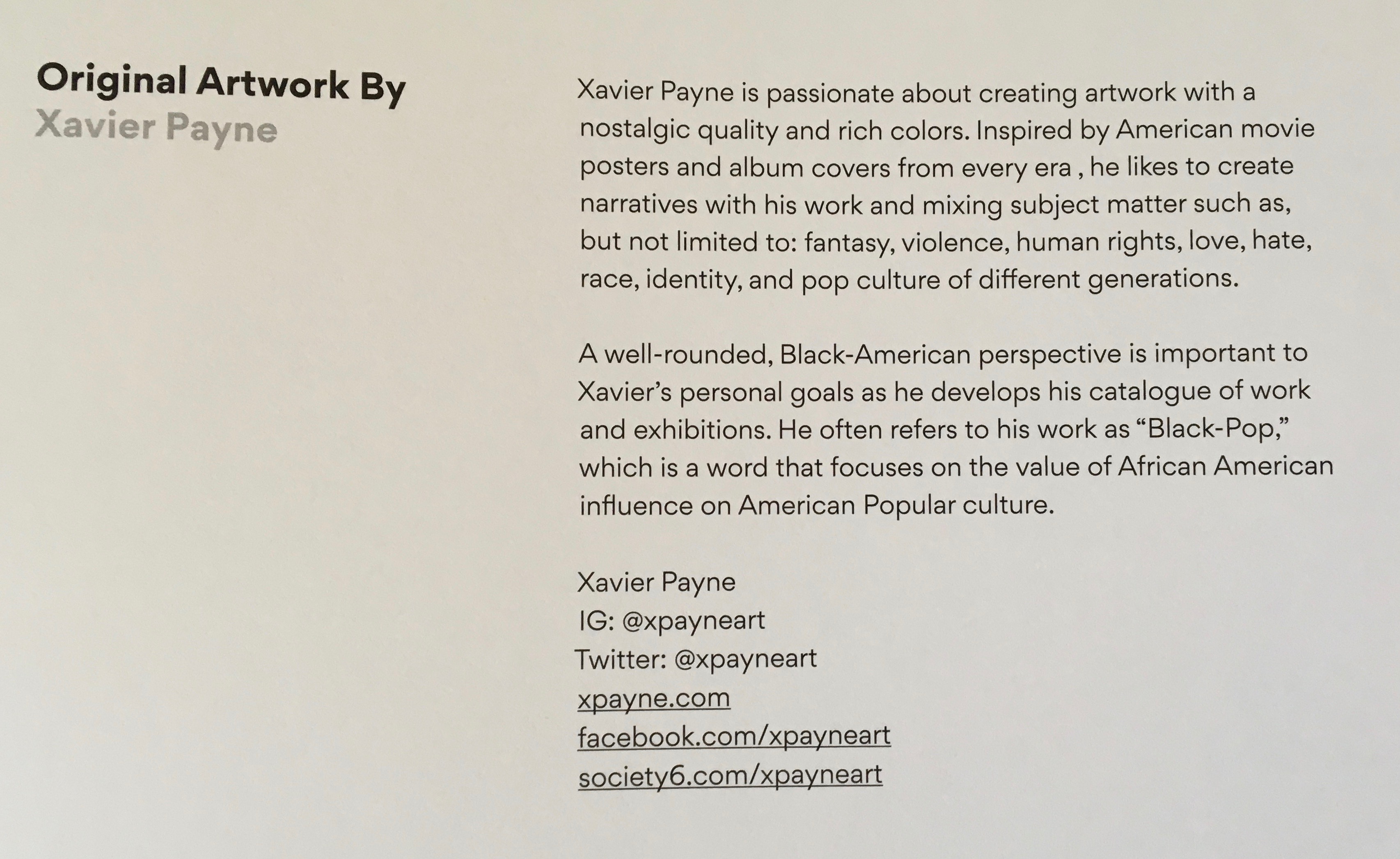 As always, there’s an insert featuring a few of the curated titles available in this month’s store. If you dig what you hear from Main Source, you should probably go ahead and grab a copy of that Pete Rock disc as well. But if you’re open to suggestion, Eddie Gale’s Ghetto Music is the very definition of musical adventure and well worth checking out. 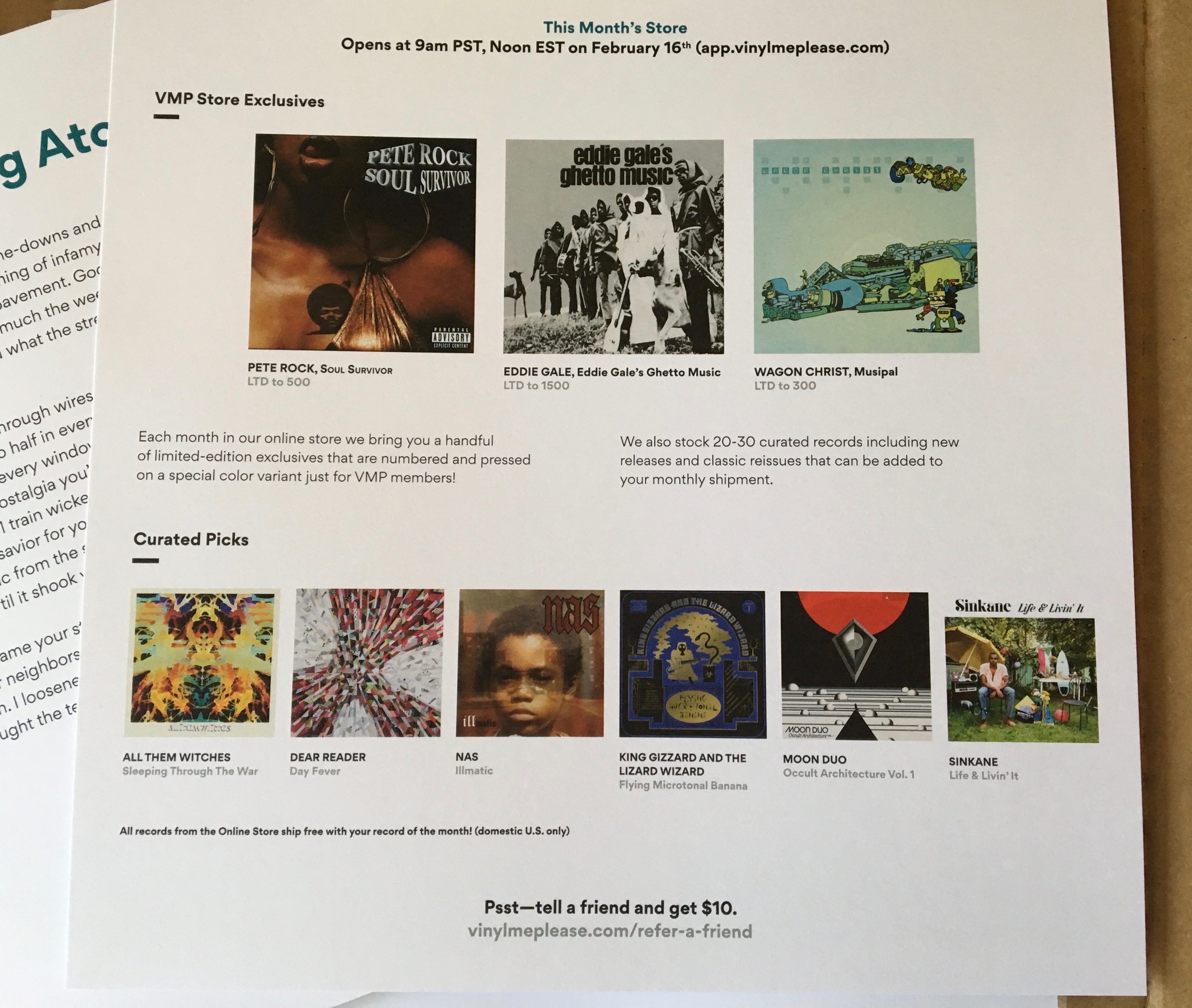 Let’s move along, shall we? But not without admiring the inner-gatefold artwork. And a few inspiring words from Mr. Pharoahe Monch. 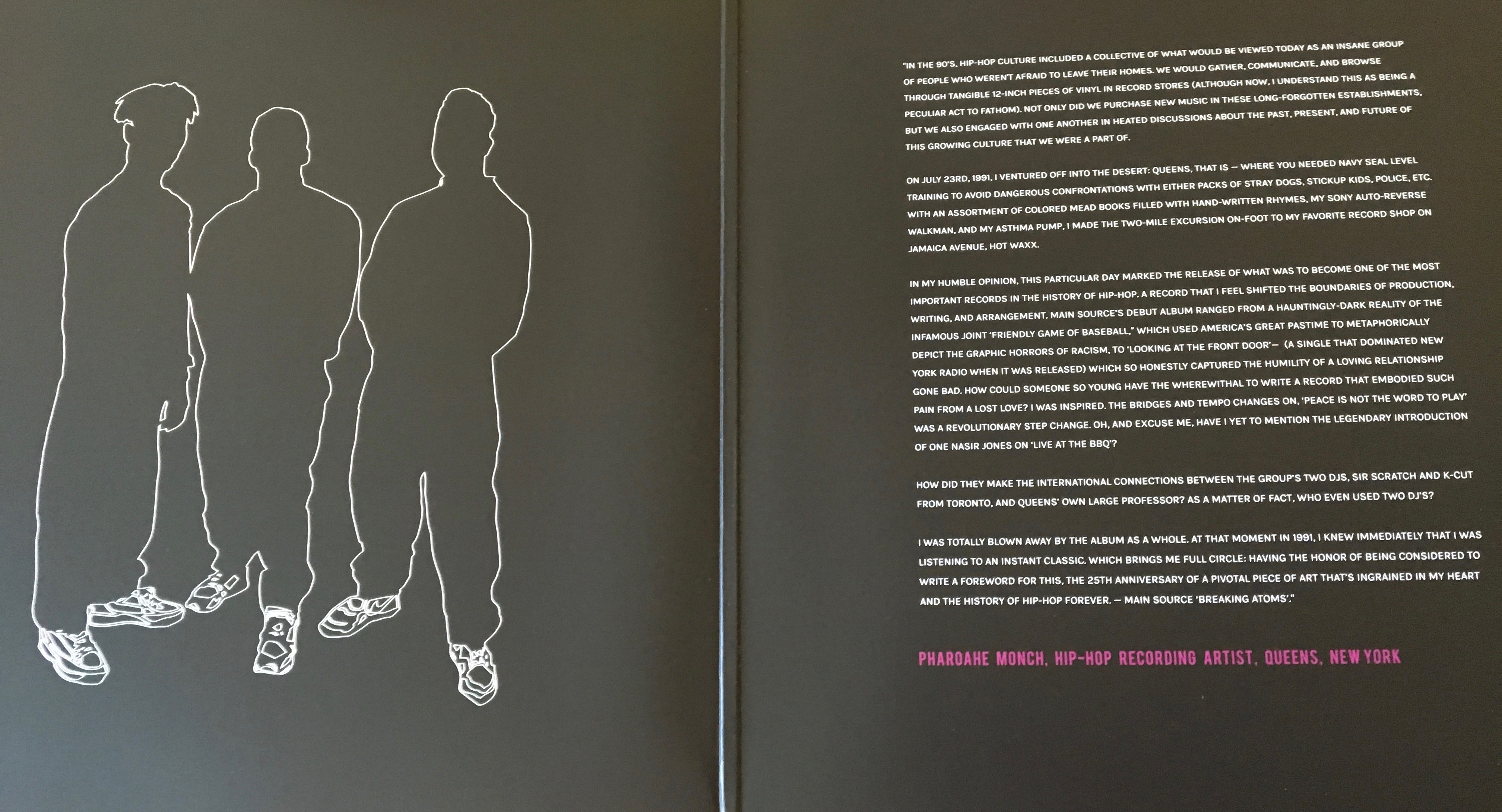 Be sure to check both sleeves of that gatefold. Otherwise you might miss this killer 7″ Bonus disc with a remix of ‘Peace Is Not The Word To Play’. 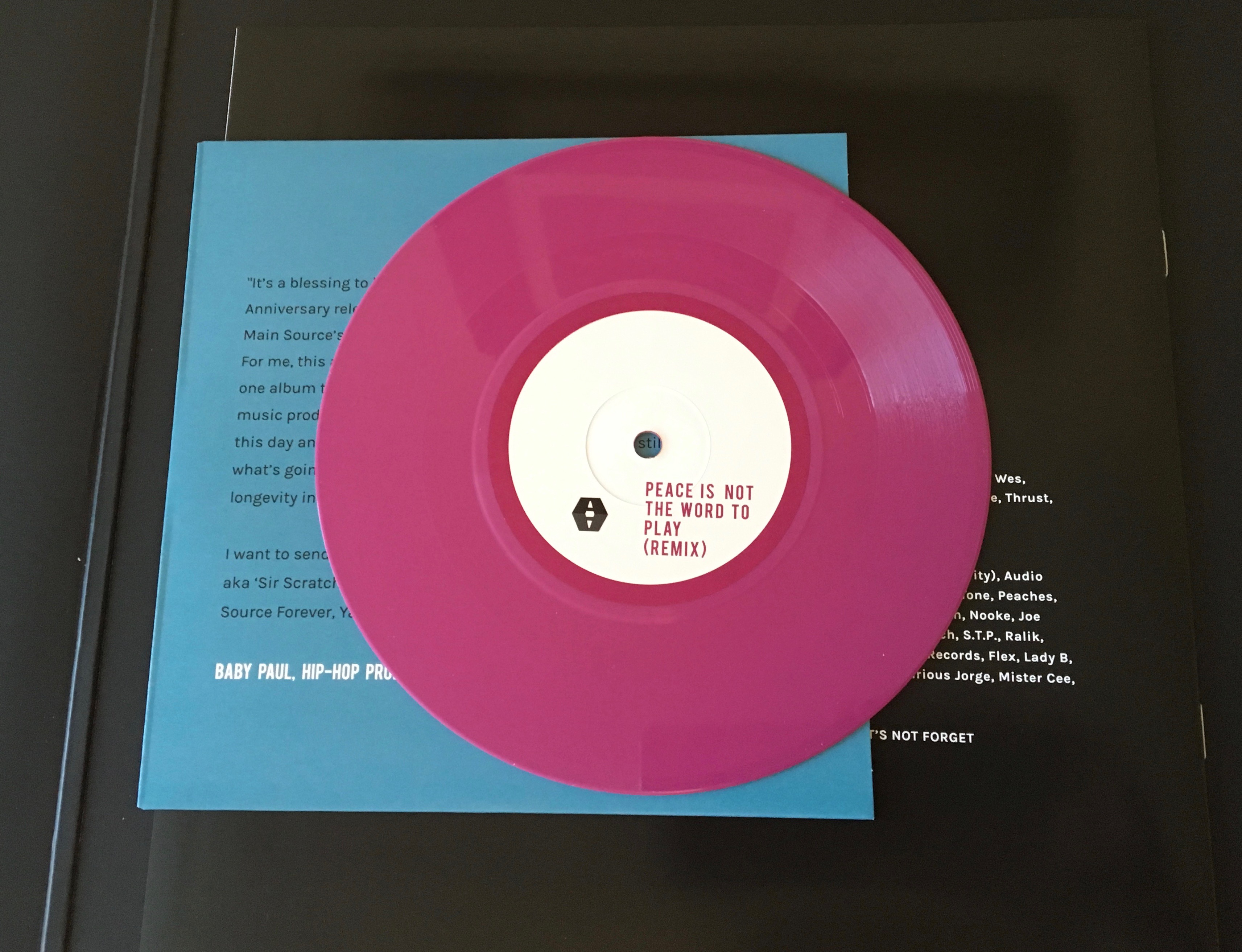 Don’t sleep on the B-side cut either. 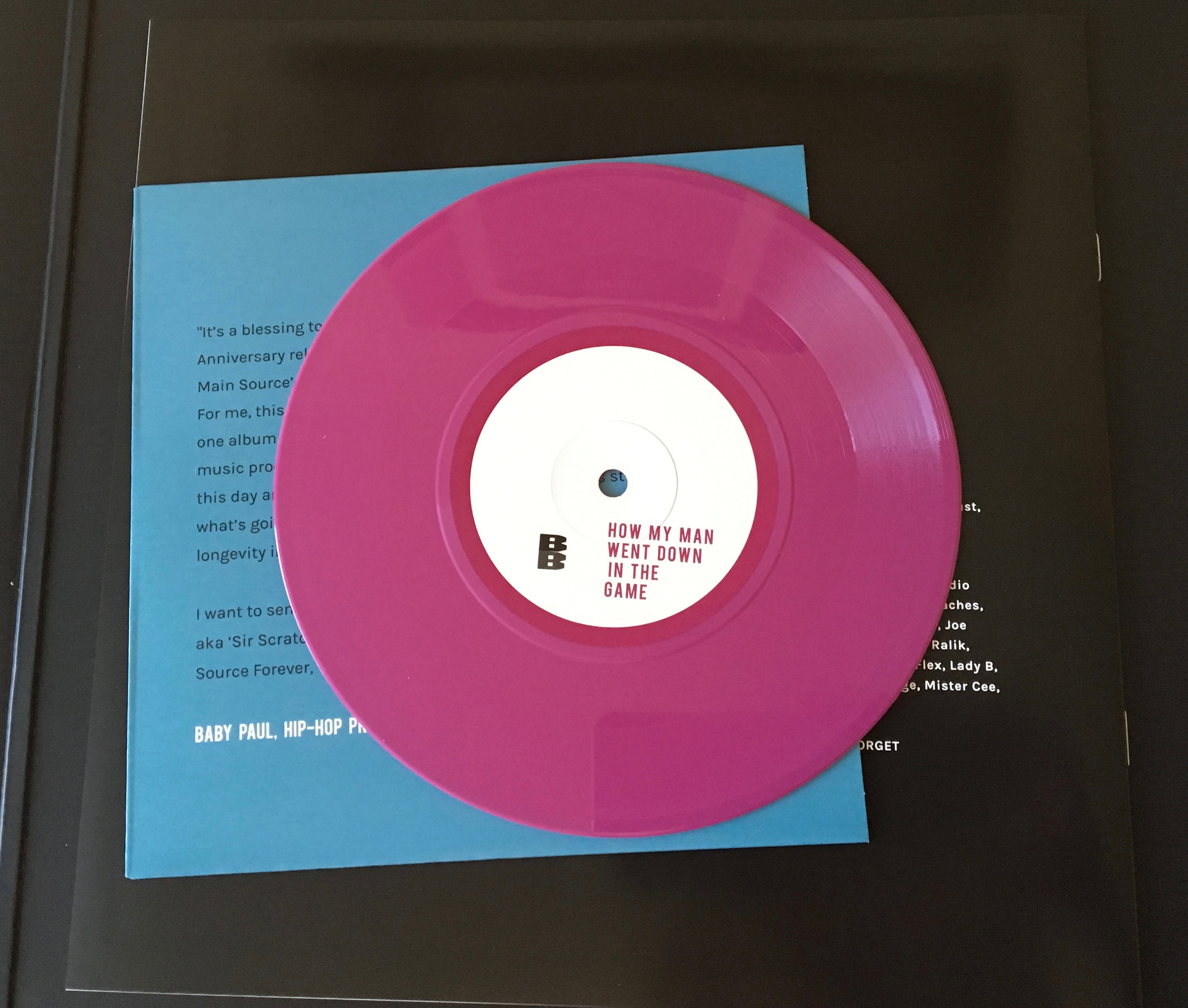 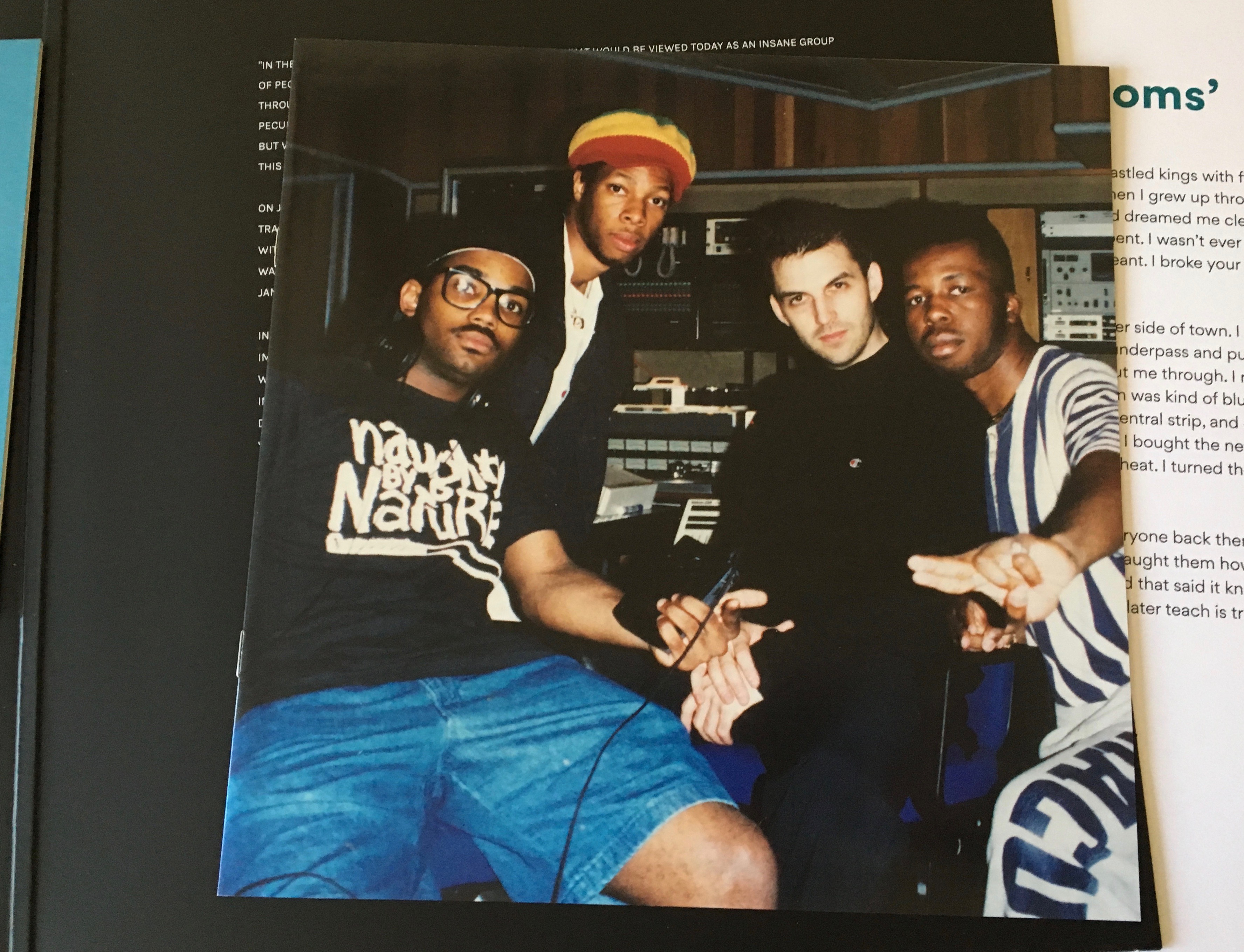 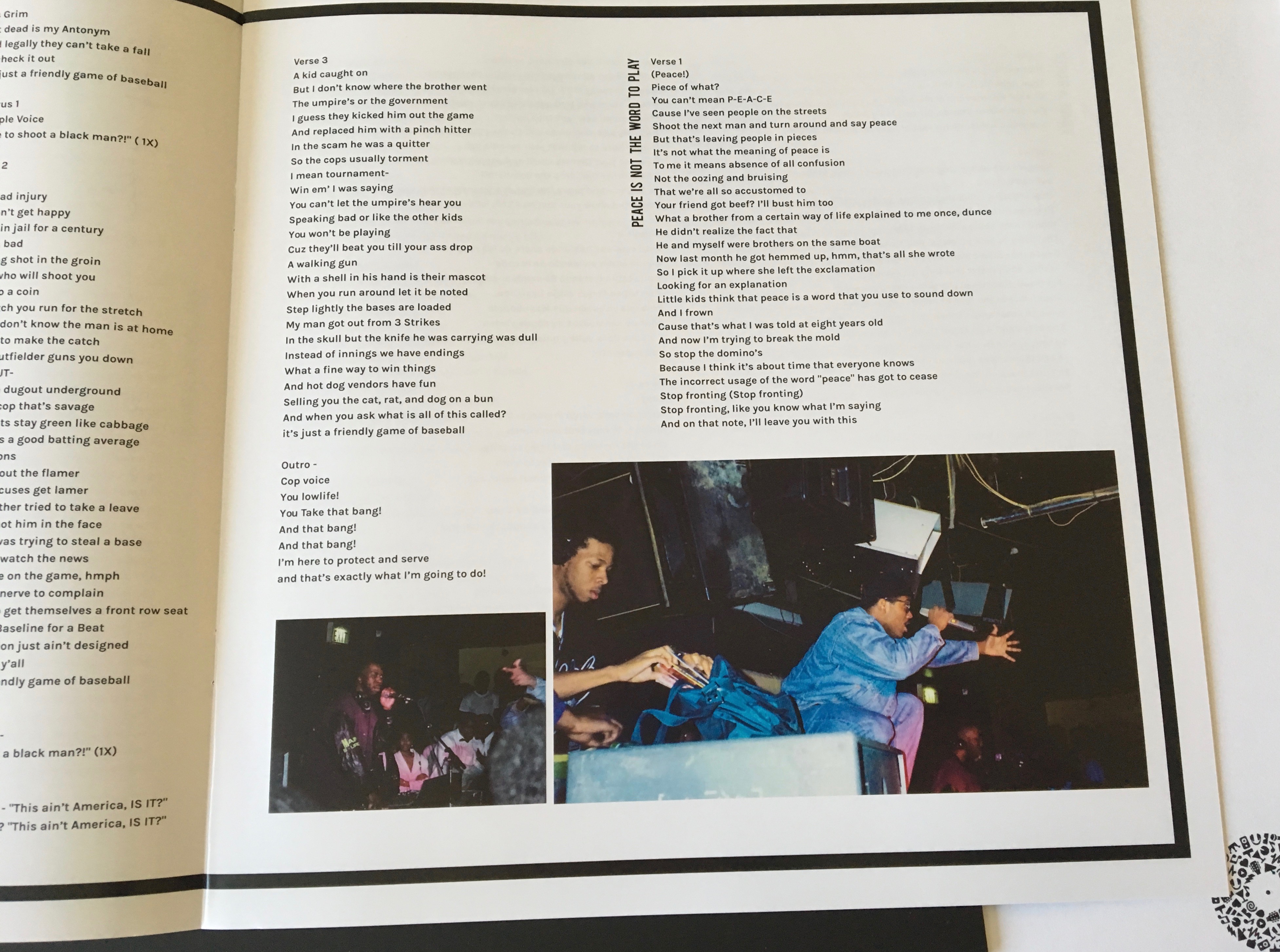 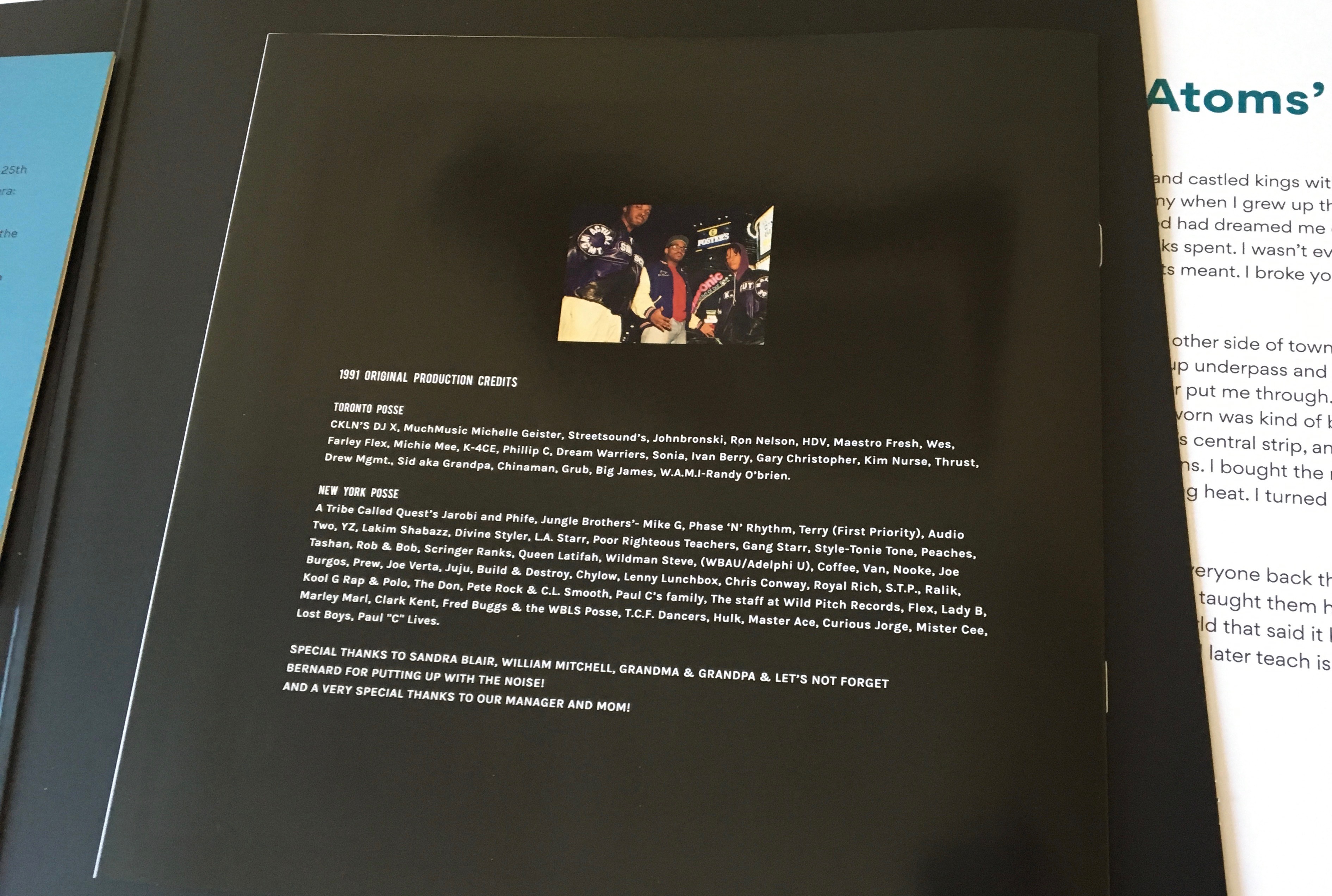 Now, what about that wax? Well, it comes in this fancy sleeve complete with the periodic table of elements. Which is nice. 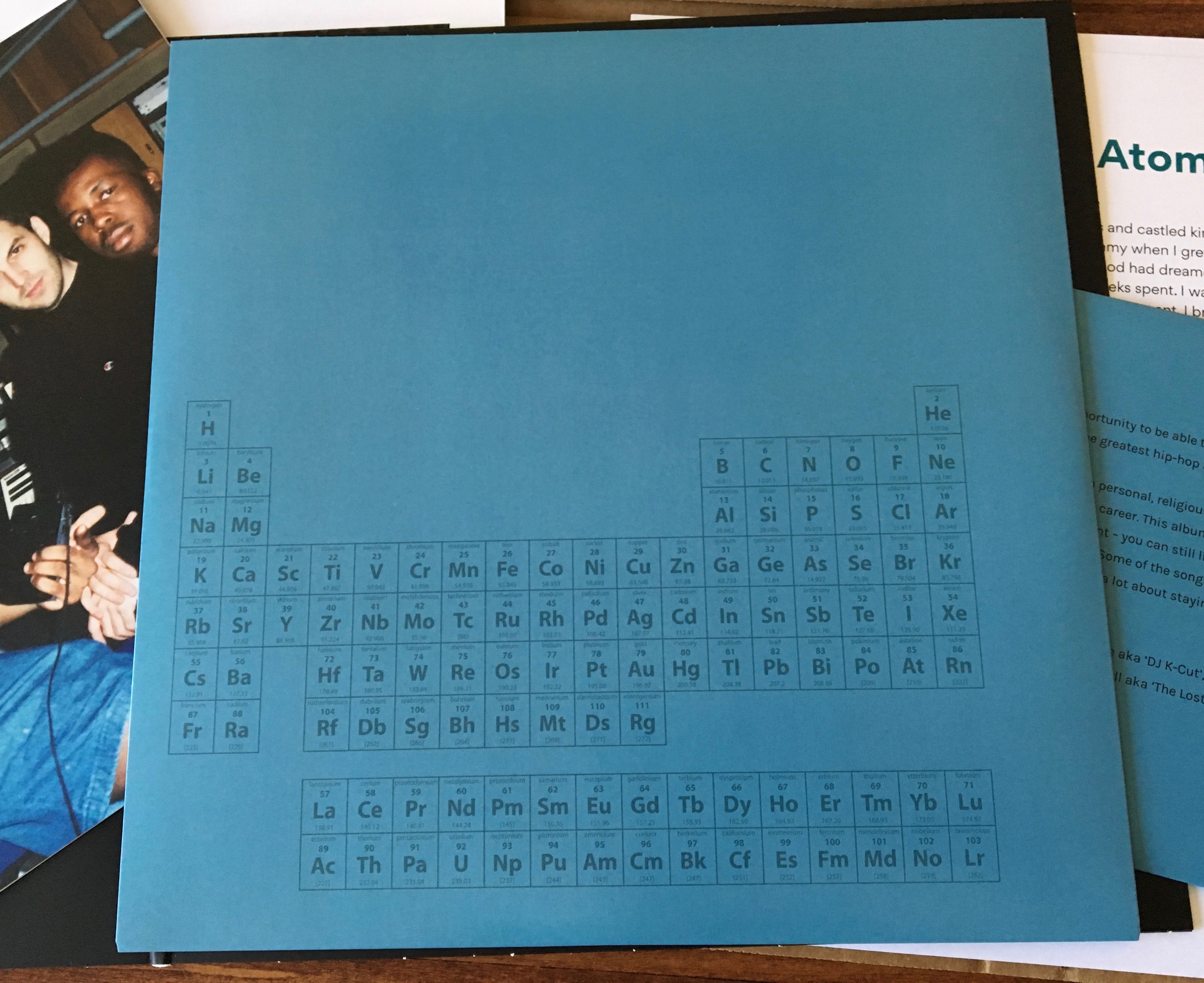 And it looks like this. Which is better than nice. 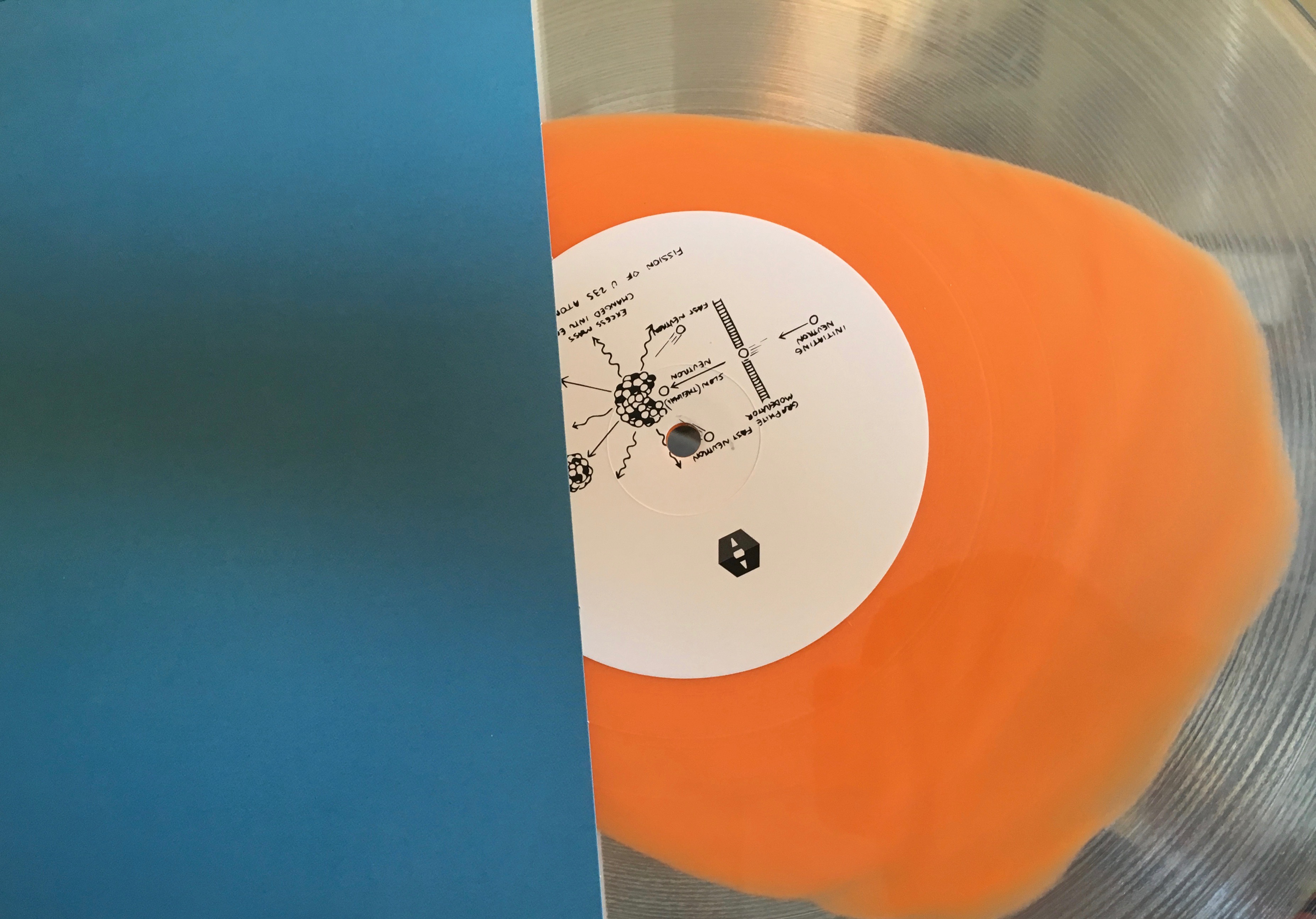 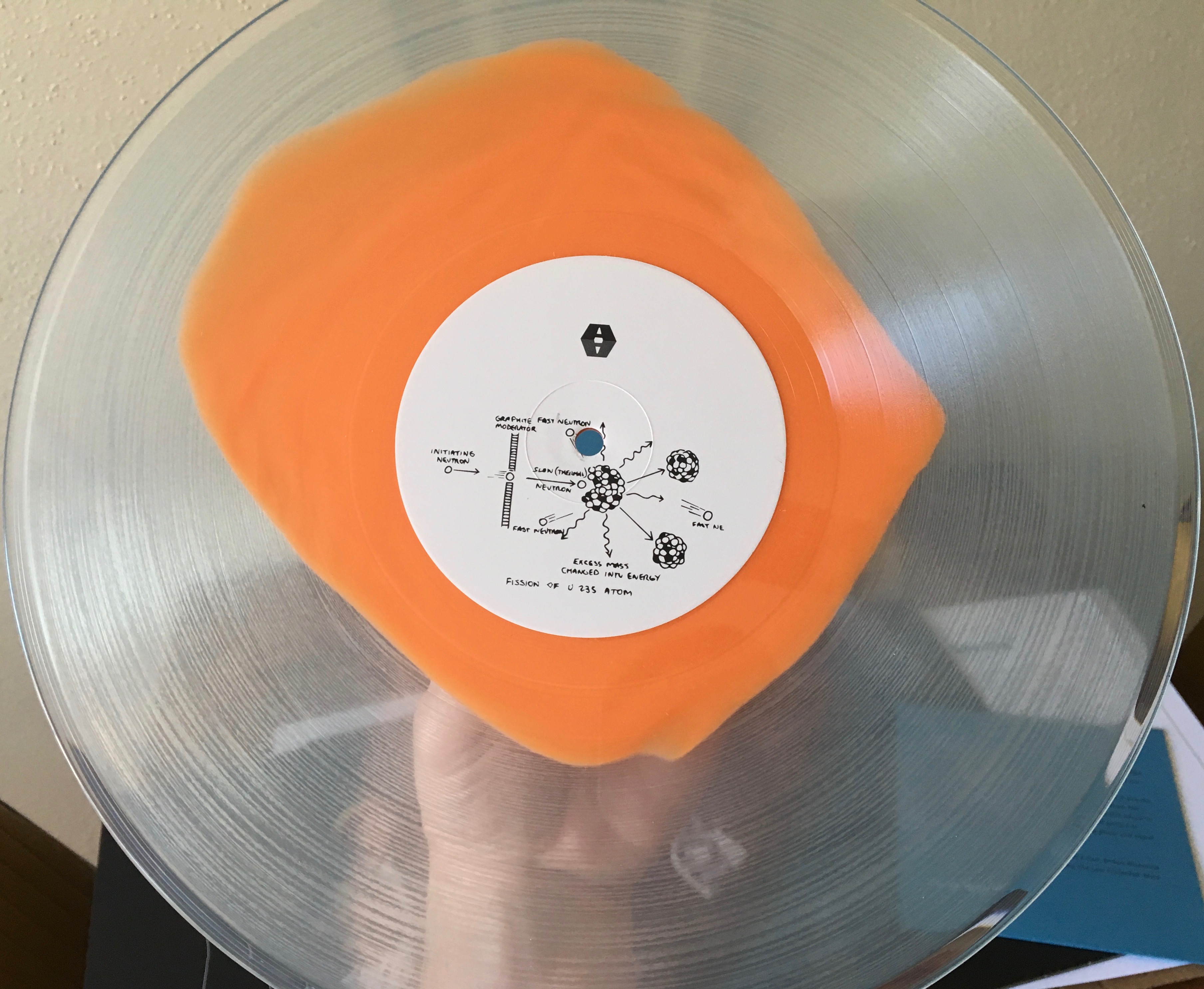 I’m not quite sure what to call it. But I can see my hand through part of it. There’s science on the label. And I hope it looks as good on your deck as it does on mine. 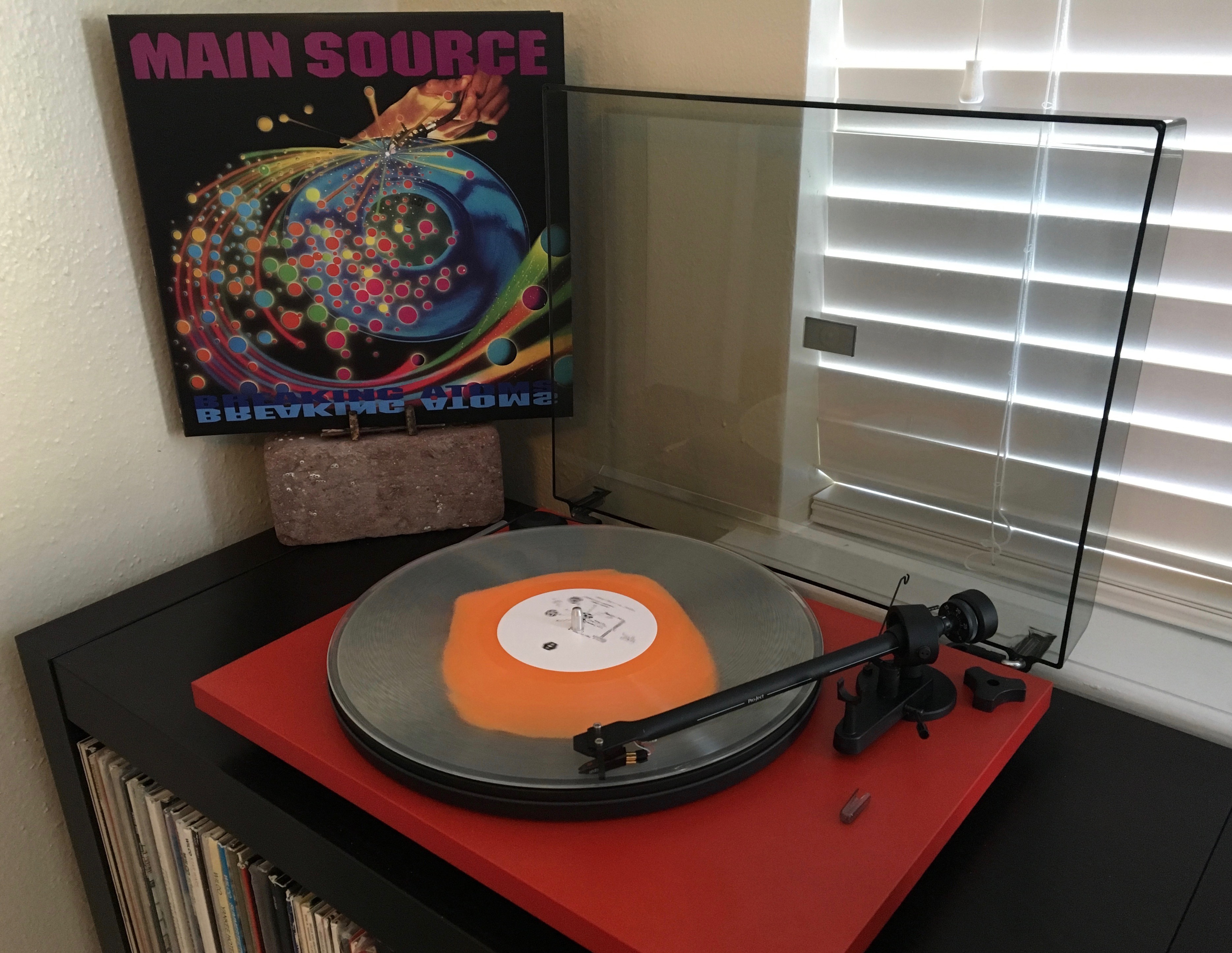 How’s it sound? Like you flew into New York on a red-eye, caught a cab at 5am and managed to bark out an address before falling asleep in the back seat. You wake up an hour later somewhere in Queens. That’s not where you wanted to go. But you’re too tired to think about it. You find your way to the nearest hotel and check in. It’s too late to sleep, but too early to wake. You lay in bed and stare at the ceiling. You hear noise from the next room. The thumping from some sort of analog beat machine. Your heartbeat matches the rhythm. Someone drops freestyle lyrics over top. The city outside begins to wake with car horns and profanity and screeching subway cars. The sounds blend together like some fevered dream of a past half-remembered. And then you drift off to sleep.

Fine, I’ll admit it … my hip-hop knowledge doesn’t stretch too far beyond the experimental period in my life between 1994 and 1997. I’d never even heard of Main Source before the folks at VMP put them on my radar. Listening to Breaking Atoms is like jumping in a time machine and immersing yourself in a time and a place barely understood … almost forgotten. Then at some point you realize that what you’re hearing is still painfully relevant. The beats on ‘Breaking Atoms’ feel fresh. The vibe is funky as hell. The lyrics are as biting as they must’ve been upon release … a dramatic reminder of problems passed and a future unattained. I can’t thank the folks at Vinyl Me, Please enough for sending this one my way. And for making every month’s release an adventure. ’Cause that’s the whole point of music.

A big THANK YOU to our friends at Vinyl Me, Please for sponsoring this subscription. Don’t forget to check out the official Vinyl Me, Please website and sign up to get some choice wax delivered right to your door each month! Can’t wait to see what crunchy treat’s in store for March.