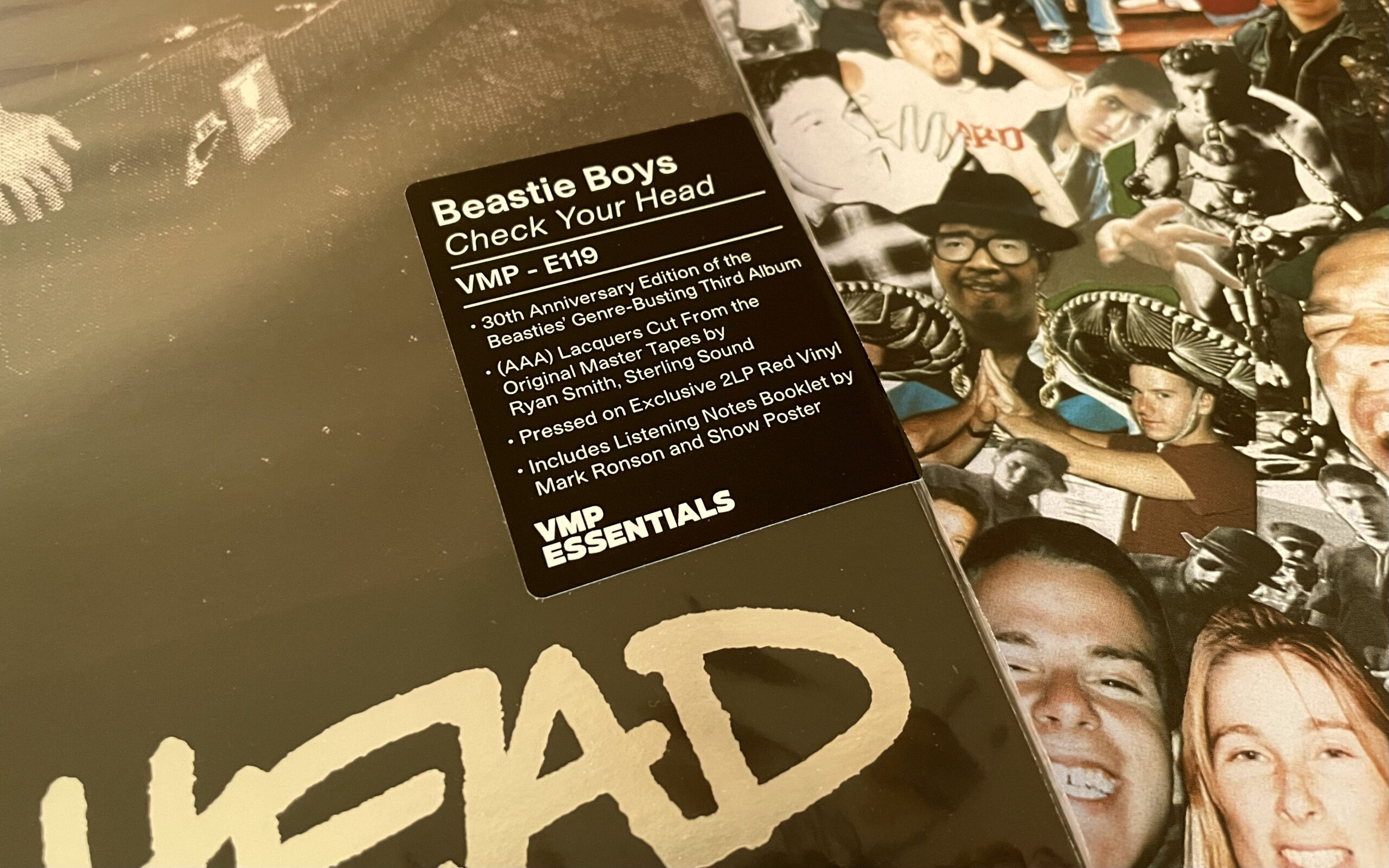 You’ll have membership privileges in the VMP store too, which means you can grab a copy of previous VMP selections from the archives – including their jaw-dropping reissue of Bruce Springsteen’s low-key classic Nebraska – or choose from a slate of super-limited releases pressed exclusively for Vinyl Me, Please. The store is open, and Team VMP are dropping fresh new selections to their stock every single week. Do not miss out.

As for November’s box Team VMP tabbed what is, in my personal opinion, the best album of the 1990s for the Essentials treatment in the Beastie Boys 1992 masterpiece Check Your Head. Here’s a look.

For the Love of Music, Please Do Not Bend

If you’ve been tracking the comings and goings of Vinyl Me, Please since the early days fo the service, you have likely noticed a pretty dramatic shift in focus over the past several months. Primarily, VMP has been setting their sites on historically larger albums for the Essentials track of late – i.e. hitting Springsteen last month, and notching Bob Dylan for December. And that tactic absolutely includes November’s pick, Check Your Head by Beastie Boys.

By no stretch of the imagination am I gonna lay down a history lesson about Mike D, Ad Rock, and MCA right now because, well, they’re the effing Beastie Boys, man. They were not only one of the best-selling acts of the 90s and 2000s, but one of the more critically adored groups of the era, and continue to boast arguably as fervid a fan base as they had during their heyday. More than any of that, the band will ever rank among the most wholly original in the history of music.

As adventurous as the band was during their run, most folks pit Beastie Boys firmly in the realm of hip hop. And that’s not really inaccurate, even if their style, sound, and overall approach to song craft ranged slyly into several other genres. So much so, it hardly seems right to slot them into any single one. But this is the band that released 1989’s sample-crazed marvel Paul’s Boutique, which is a hip hop masterpiece if ever there was one.

That album was, of course, a sharp left-turn sonically from the one that preceded it, the band’s iconic 1986 debut Licensed to Ill, which blended pop, hardcore, and hip hop in ways the world had really never heard before. The band shifted gears again with 1992’s Check Your Head, sending the samples packing, and picking up their instruments once again to record live in the studio.

Playing instruments led to a massive shift in how the band wrote and recorded the tracks on Check Your Head, which take on a warm, lived-in feel all but absent their first two releases. That approach also opened the door to loose little jam sessions that lend an air of jazz, and funk-infused trip hop to the album. Coupled with the group’s uncanny ability to conjure a catchy rhyme and a filthy beat, Check Your Head was the Beastie Boys album that celebrated every facet of the band’s musical ambition. And yes, it proved beyond question that Beastie Boys were a band with more on their minds than just rhymin and stealin.

As it happens, Check Your Head was also one of the rare hip hoppy albums of the era that was actually recorded to tape. Those original master tapes were indeed used to remaster VMP’s pressing of Check Your Head. And I can assure you, you’ve never heard this album sound so good. Do not miss out.

There’s been much said about the quality of the photograph donning the cover of Check Your Head over the years. But the bare-bones, low-res snap of the boys chilling on a sidewalk really could not match the homegrown vibe of the album any better.

Ditto for the gatefold-adorning shot of the guys getting to work in the studio. Yes, there’s full lyrics and album credits in there too.

There’s alsoa sweet collage covering the back cover there… right along with that shiny VMP Essentials foil stamp.

As always, there’s another sticker in every VMP box celebrating the latest winner of the subscriber design contest. This one from malo Sakanoue is not my favorite to date. But it is a lot of fun if you like sushi, and aliens, and vinyl.

The OBI-strip cradling the spine of this Beastie Boys classic fronts some vital info itself, including the album’s VMP catalogue number, and an excerpt from the accompanying listening companion.

By the way, that booklet was penned by legendary DJ and producer Mark Ronson, and it’s a testament to Check Your Head that he still has such an undying affection for it.

This mont’s album-inspired art print is more of an old-school gig poster. And that feels more than fitting somehow.

About the wax inside, well, it’s oh-so pretty in this label-inspired burgundy. Though I kinda feel like that kick ass Grand Royal Records tag is sort of drowned out by the matching wax. Oh well.

Either way, it’s set to bring the appropriate funky punch to any deck under the sun. It certainly did mine.

How’s it sound? Like nothing that was ever recorded before, and nothing that’s been recorded since. And there are maybe like 3-5 other albums in the history of music that can legitimately make that claim.

I know, I know. I’ve geeked out more than enough about Beastie Boys and Check Your Head enough already, so I won’t go full court press here on why you should check this pressing out. I will, however, make note that I owned an absolutely brilliant copy of this masterpiece prior to VMP sending it my ways as the November Essentials pick. Frankly, I was so blown away the Vinyl Me, Please pressing that I kept it and gifted the old copy to friend. That’s as ringing an endorsement of the pressing as I can mak, so make of it what you will.

check out the Vinyl Me, Please website and sign up to get some choice wax delivered right to your door each and every month! Be sure to check back next month to see what vinyl treasure Team VMP sends our way!