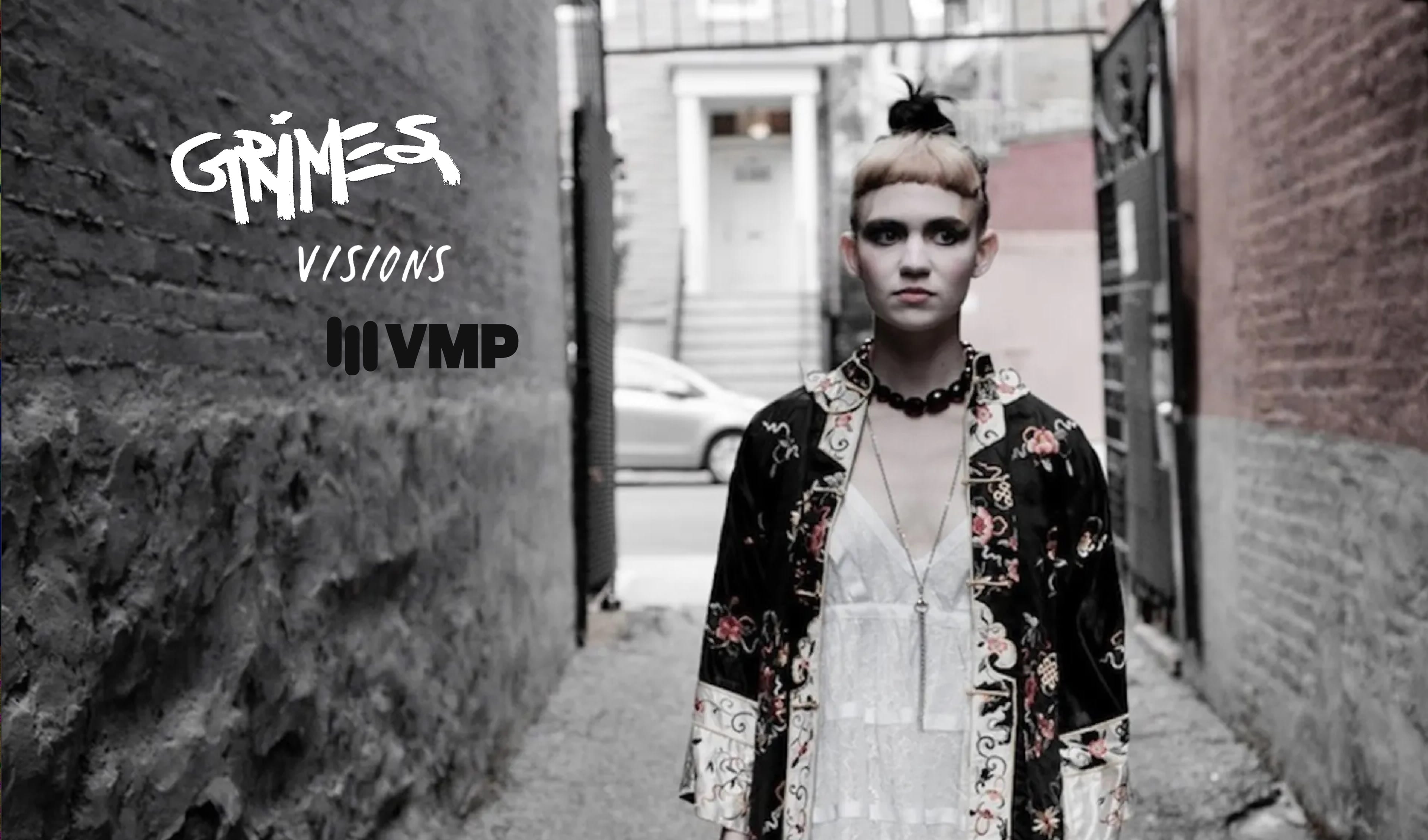 You’ll have membership privileges in the VMP store too, which means you can grab a copy of previous VMP selections from the archives – including January’s gorgeous reissue of Ágætis byrjun by Sigur Rós– not to mention a slate of super-limited releases pressed exclusively for Vinyl Me, Please. The store is open, and Team VMP are dropping fresh new selections to their stock every single week. Do not miss out.

So what’s in February’s box? How about a fresh reissue of the breakout album from indie pop ingenue Grimes? Hell. Yes.

If you follow modern pop music even casually, you’re well acquainted with her name. And if you follow tabloids or tech news, you probably know a thing or two about her personal life. But I wonder how many of you actually know anything about the music of Grimes? To date, her audacious experimental pop oeuvre spans a full five albums, and if the reviews of those albums ring true, you’ll not find a lousy collection of songs in the bunch. Grimes’ 2012 release Visions is the middle child of that oeuvre, and in the mind of this humble narrator, it’s not just the best of the bunch, but a legit modern pop masterpiece.

I should probably tell you, however, that as of this writing, Visions is the only Grimes album I’ve ever heard. And I should also be clear there’s no particular reason I’d never given any of her stuff a go before. Mostly, it’s because I’m extremely picky about the pop music I expose my ears to, and just never got around to testing the musical waters of Grimes. After listening to Visions I’m willing to admit that was a mistake. And I will now set about correcting that grievous oversight by listening to everything she’s ever recorded as soon as humanly possible.

I’ll likely begin that process by giving Visions another spin or three, because this album was not at all what I expected when I dropped the needle. To be fair, I don’t know exactly what I did expect when that fateful moment came, but it certainly wasn’t 48-minutes of spaced-out, lo-fi pop music simultaneously fit for dancing alone in the dark, or gazing blindly at the ceiling while contemplating the origin of the universe… but that’s exactly what Visions is, and I couldn’t have been more enthralled every rapturously muted moment.

For those who don’t know (and I obviously didn’t!), Grimes is known as a legit do-it-yourselfer when it comes to her music. And as she has with most of her releases, Grimes (aka Claire Boucher) took a decidedly DIY approach in creating Visions, writing and recording the entire album herself using Garageband, and doing so in a drug-fueled haze over a three week stretch in a black-ed out apartment sans food or sleep. This is hardly the way most artists would go about recording their magnum opus, but it clearly worked for Grimes, who managed to crank out 13 fiercely moody, and often insanely catchy tunes under those intense circumstances with nary a producer, or bandmate in sight.

She then assembled those songs into the lavish sonic tapestry that is Visions. And to hear Visions is to hear an artist living on the edge, but still pushing herself further into thrilling aural and emotional spaces. The result is not so much the sound of an artist re-inventing herself than it is one actually giving birth to her truest self. The indie pop realm has never been the same. And you won’t be either once you give this indie pop diamond a spin.

Visions is about as DIY an album as you’ll ever find in the pop realm. So it’s only fitting the album’s cover art was done by Grimes herself. And if you’re looking for meaning in that cover art, well, I’m sure there’s lots to find it’s graffiti-like facade.

As for the Mark Kahir designed demonic alien head thing on the back, make of that what you will as well. And don’t forget to check out the shiny VMP foil stamp that forever denotes this pressing of Visions a true Essential.

Oh, in case there’s any doubt about that Essentials status, the info on this hype sticker should more than confirm it.

For those who haven’t heard, the monthly Vinyl Me, Please sticker design contest has become one of the cooler additions to every month’s delivery of late. While one from Joel Rockey isn’t an all-timer for me, it’s still as slick little vinyl inspired number.

As with every VMP release, Visions came cradled by a OBI strip boasting some vital stats. This beatific beauty from Grimes is the 110th Essentials pick. And if you want to read an excerpt from the album’s accompanying listening booklet, just flip it over.

In lieu of reading that excerpt, you could, of course, always just dig the booklet itself out of the sleeve. And you should, because this month’s was designed and penned by Grimes herself, who delivers a track by track breakdown of Visions.

Given her level of involvement with this Vinyl Me, Please reissue of Visions, it should come as no particular shock that Grimes also crafted this month’s album-inspired artwork.

In case there were any question, she also did the prints adorning the album’s inner sleeve.

I’m pretty sure, however, that Grimes did not actually hand-pour every album for pressing this month… though she likely approved this marvelous magenta/green galaxy color way.

And just wait until you see it spin.

How’s it sound? Like the drug-addled dream of a lonely, late-night recording session manifesting before your very eyes. Only in your ears… obviously.

Over the years, I’ve come to genuinely love a lot of things about the record club scene. But what I love the most is when they expose me to something I, for whatever reason, missed out on when it was released. Yes, I’ve read as much about Grimes in recent years as everyone else on planet Earth. But I’d somehow never heard a single one of her songs prior to getting my hands on the Vinyl Me, Please pressing of Visions. Rest assured, I’ll be hearing plenty more moving forward as this one is destined to receive its share of spins in my house.