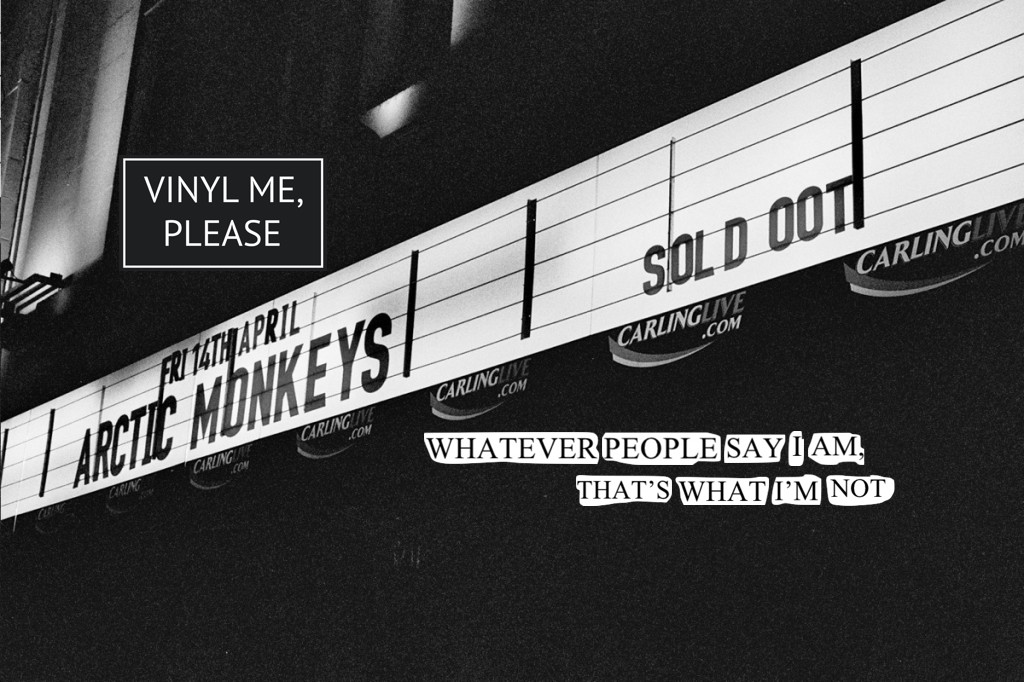 Here’s how it works. You send Vinyl Me, Please some of your hard-earned money (plans start at $25/month) and they send you one meticulously selected album worthy of your time and attention. Easy, right? Each custom pressing (often on colored vinyl!) also comes with special features like original artwork and even a recipe for a companion cocktail. Best of all, you get access to the VMP online store. That means you’ll have a chance to grab a copy of previous VMP selections from the archives – including March’s glorious 10th anniversary reissue of Devotion by Beach House – not to mention a bevy of rare and exclusive releases.

The store is now open. That means you’ll need to hurry if you want to get your hands on an exclusive pressings of new music from indie-poppers Hop Along – whose Bark Your Head Off, Dog is available on pink and green vinyl (500 copies) – and experimental R&B purveyors Unknown Mortal Orchestra – whose Sex and Food is available with a special, foil board rainbow cover and opaque blue wax (1500 copies). There’s also shiny new compilations from Nina Simone and Link Wray to consider, not to mention new music from gothic noise-rock maestros A Place To Bury Strangers. And of course, if you’re one of those folks who has just never gotten over Arctic Monkeys, their entire catalogue is also available.

There’s more. A lot more. While the store is open to the public, many of the more exciting selections are only available to members, so you’ll need to sign up if you wanna get your mitts on them. If you’re peckish about relinquishing control of your record collection over to complete strangers, know that VMP’s Swaps Program is in full effect. That means you can flip any VMP pick you don’t like for a past AOM that’s a little more your speed. My advice? Don’t overthink it. Do yourself a favor and sign up today.

So, what’s in this month’s box? Grab a smoke and a pint, ’cause it’s time to get down with Arctic Monkeys’ Whatever People Say I Am, That’s What I’m Not.

Oh hey, you didn’t scoop yourself a copy of that VMP Exclusive Pressing of Amen Dunes’ new album Freedom? Too bad, ’cause it’s all sold out, my friends. You’ll just have to sit back and gaze longingly at mine for now, which is #380 of 600. Just FYI – there’s always great stuff in the VMP store, so make sure you’re keeping an eye on it.

For the Love of Music, Please DO NOT BEND (a shallow review of Arctic Monkeys breakout debut)

The mid to late ’90s saw the musical landscape patently oversaturated with sunny, all but carbon copied bubblegum pop acts. Needless to say, it was a difficult time to be a rock fan. Luckily, it didn’t last. The early 2000s saw a reactionary rock scene seismically shift back toward the DIY, garage rock aesthetics that made the punk/post-punk scene so momentous 30 years (give or take) prior. As such, acts like The White Stripes, The Strokes, and The Vines unexpectedly found themselves selling out club dates and topping U.S. charts. Meanwhile, the ever-finicky U.K. rock scene saw bands like The Libertines, Franz Ferdinand, and Bloc Party setting the pace for a similarly energetic revival of rock music that was steeped in the angst, urgency, and brazen affability of youth. It was the same sort of energy that drove Arctic Monkeys’ 2006 debut Whatever You Say I Am, That’s What I’m Not.

Of course, Arctic Monkeys arrived a little later to the garage rock revival than some of their peers, which means that their sound was deeply influenced by them as well (The Libertines and The Strokes in particular). Still, many would argue that the Monkeys took those influences and distilled them into a sound that transcended influence. It was a sound drawn from lascivious dance floor encounters, late nights passed in poorly lit pubs, and tawdry tales of blue-collar life in Northern England, and one forged by Jamie Cook’s crunchy guitar riffs and the raspy voice of Alex Taylor. When Whatever You Say I Am, That’s What I’m Not hit record stores in the U.K., that sound proved far more accessible than that of their contemporaries, and it made overnight sensations of Arctic Monkeys.

To the surprise of all, the band’s antagonistically titled debut sold a jaw-dropping 360,000 copies in its first week, surpassing releases from U.K. legends like Oasis and Elastica to become the fastest selling debut album in the country’s history. On the strength of standout hits like “I Bet You Look Good On The Dance Floor,” “You Probably Couldn’t See For The Lights But You Were Staring Right At Me,” and “When The Sun Goes Down,” that debut would eventually go quintuple platinum in the U.K. and win the band a coveted Mercury Prize for Best Album. Over a decade after its release, Whatever You Say I Am, That’s What I’m Not is still regarded as one of the best debut albums of all time.

And I’m still not a very big fan of it. I don’t exactly know why that is. Whatever You Say I Am is a clever, often electrifying collection of neo-punk dance songs. It’s also one of those Brit-rock albums from the era that, whenever I hear it, I just end up thinking, “Well, that’s not as good as Up The Bracket (the killer debut from the aforementioned The Libertines).” I believed that back in 2006. I still think it’s true today, no matter how big a wanker Pete Doherty has turned out to be. That being said, the shiny new pressing of Whatever You Say I Am, That’s What I’m Not that Vinyl Me, Please slipped into this month’s box really is a bit of a stunner. So let’s forget all my nay-saying b.s. and get to talking about that vinyl, shall we?

Whatever People Say I Am, That’s What I’m Not is an album drenched in cocky swagger and youthful exuberance. So yeah, that cheeky, smoky smirk on the cover (courtesy of the band’s pal Chris McClure) pretty much says it all. As does his utter inability to take it seriously on the back. Also, that’s an actual Arctic Monkeys sticker on the cover there, which is pretty damn punk.

Ok, before we commence to digging, we should really take a moment to absorb the important info on this little sticker here.

Now, the first thing you’ll notice when you take that plastic off is that the folks at Vinyl Me, Please have undertaken another shift in their packaging, and it’s a welcome one at that. Gone are the giant inserts that have been accompanying each release over the past year or so, and back are those swell little sleeve wraps of yesteryear … only a bit more streamlined.

Still, they’ve got some vital information to extol, such as the VMP catalogue number and album name.

Not to mention a few carefully chosen words about why Arctic Monkeys’ boisterous debut made the cut as the VMP Album of the Month.

And of course, there’s the recipe for Whatever People Say I Am‘s companion cocktail, the aptly named Riot Van. It sounds a bit like a super fancy Manhattan, only you make it with Scotch and beer … which might be the only thing that could make a Manhattan any tastier.

Keep digging and you’ll come across this month’s album inspired artwork, which is now presented on a much heaver-weighted 12″ X 12″ insert than in previous packages. Just FYI – it’s a beauty as well, as far as portraits of burning cigarettes go at lest.

As per usual, you’ll find a little information about the artist who crafted this piece (Portland, Oregon based Photographer Ben Sellon) on the flip side of that artwork.

Hey, didn’t I already mention there’s always some choice wax in the VMP store? If you don’t believe me, just have a look at this handy little flyer. Yes, there’s a limited edition reissue of Max Richter’s From Sleep hitting the shop this month. And you should definitely not sleep on it.

Now, let’s get inside that sleeve already and see what’s what. You’ll want to start with this lavish, 16 page, full color photograph/lyric booklet that’s chock full of intimate pics of the band and their pals back in their prime.

Of course, there’s that oh-so sexy, smoke colored vinyl in that sleeve as well.

And it’s likely to start a fire on any turntable it comes in contact with.

How’s it sound? Like you stumbled into your flat after a hard day’s work to find it filled with the same rakish hooligans you ran around with in your youth. None of them have aged, and you suddenly find that you’ve regressed in years as well. The air is smoky. The beer is warm. And you can’t think of anything else to do but throw on some loud music, have a few pints, and maybe pogo around the room like an idiot. ‘Cause you’re only young once. Right?

Clearly, I wasn’t a big fan of Arctic Monkeys when they were in their prime. Mostly because I thought their sound was a little too same as The Libertines (amongst others), and I simply found the frantic, egocentric idiocy of Pete Doherty far more entertaining. Revisiting Whatever You Say I Am, That’s What I’m Not hasn’t really changed my opinion about the group’s (or the album’s) merits. Still, I’d be lying if I said I didn’t get a kick out of spinning this album so many years after its release. I’m still not a big fan, but I can see myself taking a few more spins across the floor with this rollicking little number, and that certainly makes it worth the price of admission. Thanks to Team Vinyl Me, Please for giving me that chance, and for making every month another marvelous, musical adventure.

A big THANK YOU to our friends at Vinyl Me, Please for sponsoring this subscription. Don’t forget to check out the official Vinyl Me, Please website and sign up to get some choice wax delivered right to your door each month! Can’t wait to see what tasty treat they’ve got in store for May!