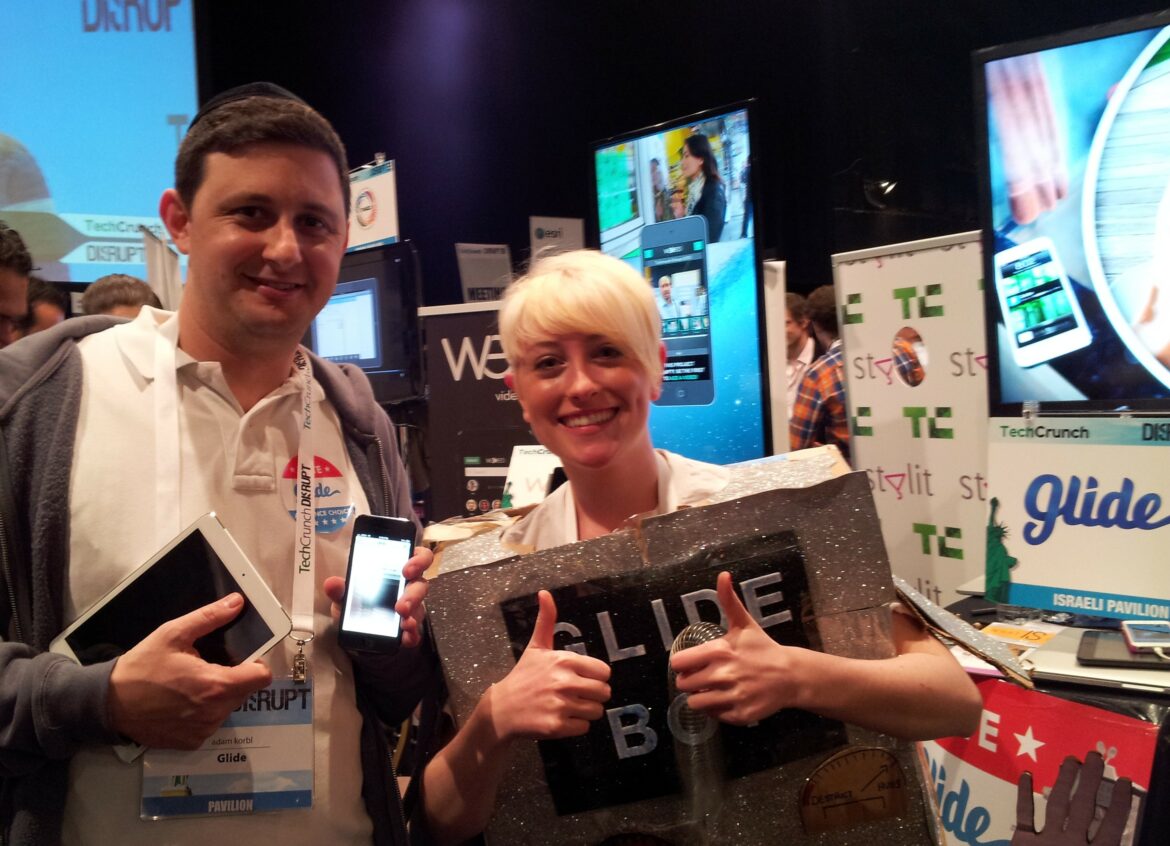 I got the chance to talk with the Glide team here at TechCrunch Disrupt, just before they won Monday’s audience choice for best startup!  Glide is a video-chat messaging app for mobile. Users can communicate with short videos, sending them to friends, to be watched immediately or held, like a text, until the receiver has a chance to watch it.

Main uses would be sending a two-sentence video instead of a text, because it’s easier to press record than to type out a message (Unless you’re me, because it would take me three times as long to put on lip gloss and make sure my hair looks good in the message.), and send immediate video greetings to distant friends and family.

Glide is an Android and iOS app. Users who begin using Glide and connect to their Facebook accounts will be able to message their Glide-using friends, and also the app’s help bot,  Glide Bot 3000.  Glide is part of the Israeli Pavilion here at TC Disrupt.  (The app is easily confused with contract manager Glider, over in the Battlefield section.)

Since it’s a video app, of course there’s an explanatory video:

Another video app, Magisto, allows users to Instagram their phone movies with filters, add music, and let the Magisto magic algorithms edit the video. Magisto founders realized that the average smartphone user takes 8 videos per month, adding up to years and years of phone videos of cute babies, goofy friend antics and travel memories than never see the light of day. (Or the light of YouTube. According to Magisto, less than 1% of captured smartphone video is shared on YouTube.)

These videos, just like millions of photos, are languishing on phones, but Magisto aims to change that with easy, automated video editing. It’s just not practical for everyone with a film of our baby being adorable or our friends’ epic beer pong game to purchase and learn video editing software. Magisto uses a video recognition and editing algorithm to identify key scenes to highlight, slow moments (and camera wobbles) to skip and good times for a cute ending. Different filters are associated with different algorithms, so a romantic video might have soft light and fades, and a party video could have fast cuts and lots of action. And of course, the user chooses the accompanying music for their new video.

Magisto’s advantage is that most people already have the video and have an MP3 of a song that would be a great background for it (if not, Magisto offers some choices), so users can just choose the video, music and filter and let the app optimize the video.

Magisto is available for iOS or Android smartphones.

Finally, the stealth mode startup, CrowdFlik, is here demoing an upcoming iOS app for crowd-sourced videos.  CrowdFlik is currently in beta, but the final product will allow users to grab multiple streams of video from an event, and make individual edits on the crowd-sourced video uploads.  The app is described as “event driven”, since the primary function would be to coordinate all the footage from an event like a concert or a wedding, into one video.

No demo video for Crowdflik yet, but there is a signup on their splashpage.

Are you trying any of these new video apps? What do you think of them? Let us know in the comments!

May Movie Preview: The Blockbusters Hit the Screen