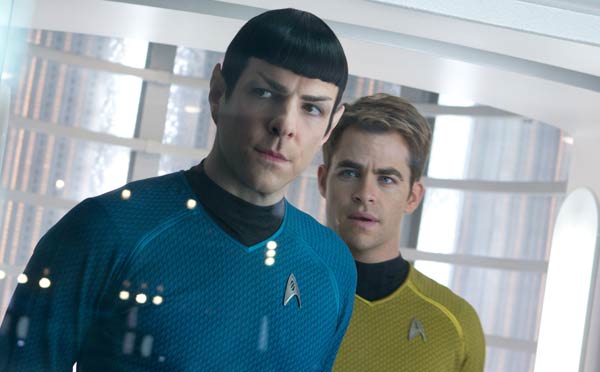 Big budget film reboots are a tricky business. Fans have expectations and, let’s be honest, we’re not always the most accepting when some Hollywood hotshot changes our precious characters. In 2009, JJ Abrams did just that with “Star Trek,” but he was praised for it. With the sequel, “Star Trek Into Darkness” right around the corner, is it possible that Abrams can do it again?

The Wrath of Cumberbatch?

“Into Darkness” reunites Chris Pine’s James T. Kirk with the crew of the USS Enterprise as they face a terrorist with ties to Starfleet. Benedict Cumberbatch, the star of the BBC series “Sherlock” plays that terrorist, the mysterious John Harrison. Now there’s every possibility that this Harrison fellow is some new character with no history in the past “Star Trek” series, but the odds seem against it. After all, this is JJ Abrams we’re talking about. The guy co-created “Lost,” produced “Cloverfield,” and directed “Super 8.” Mysterious plot twists are second nature to him.

The Trekkie world has made a lot of guesses as to whom the Brit is, in fact, playing. The conjecture with the most traction is that the character is a revival of Khan, most famous from the 1982 film “Star Trek II: The Wrath of Khan.” Since that film is widely considered to be one of the best “Star Trek” chapters, it’s possible we are all being drawn in by wishful thinking. Plus I don’t think all “Star Trek” fans are ready to see Ricardo Montalban’s character changed, even slightly.

As for the rest of the cast, all of the familiar faces are back from the previous installment. The trailers show Kirk getting in trouble a lot, which seems to be a running theme for this series. More interesting, though, will be Spock, played by Zachary Quinto. The Human-Vulcan was featured prominently last time, but is so far marginalized in the advertising for “Into Darkness.” However, I imagine we’ll at least get an update on his Lieutenant Uhura (Zoe Saldana) romance.

From Bones to Scotty and Sulu, everyone is back, but there’s just not enough time to dissect them all. Since ’09, the cast’s collective star power has increased. In addition to Cumberbatch, we also get our first look at Dr. Carol Marcus played by Alice Eve. Star Trek fans know all about the character. For those who don’t, we’ll say she’s a love interest for Kirk.

From how it is being promoted, the film may be the most epic release of the summer. There looks to be a balance between space and Earth action, which helps to appeal to lesser sci-fi fans. Last time around, we learned that this “Star Trek” series takes place in an alternate dimension from the TV show and past films, so everything is allowed to play out differently. At least, that’s what Abrams and his band of sci-fi writers and producers tell us, but what that really means is that nothing has to match William Shatner’s era on the Enterprise. In fact, Spock could grow a mustache and we would have to accept it. Can Vulcans grow mustaches?

So the countdown is on for Kirk, Spock and possibly Khan. It should be a fun turn before Abrams trades in his phaser for a lightsaber. His high profile signing on to direct “Star Wars: Episode VII” revived the old Trek vs. Wars rivalry. After “Into Darkness” hits the big screen, the Trekkies may be wishing they could beam the director back to their franchise. “Star Trek Into Darkness” is in theaters on May 17th in the US.