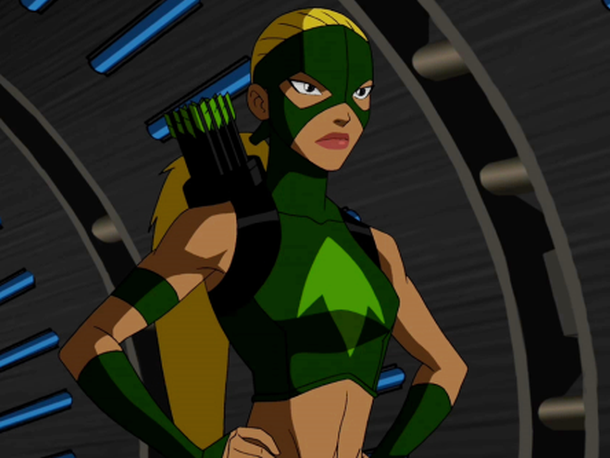 I’m going to be honest with you, I really don’t care too much for the ‘good’ guys and gals of Geekdom. You may have noticed that all of the Undistressed Damsels so far have been at best ‘chaotic neutral’ or just plain old ‘evil’. But when it comes to Undistressed Damsels, they’re not all bad, which is why this week’s Damsel who’s totally not Distressed is-

There’s a few different versions of Artemis to choose from, though the overall theme of her is the same tale of “Girl meets Bow, Girl falls in love with Bow, Girl uses Bow to do her bidding, Girl is awesome”.

But the reason I chose Artemis Crock from Earth 16 (The universe that Young Justice series is apparently set in) is because she’s the kind of hero that the world needs more of. Also, we would have totally not hung out in high school because she would have scared me. But I would have always secretly wanted to be her friend.

If supervillains were royalty, the media would have camped outside which ever hospital Artemis was being born in. Then memes would have been created minutes after her parents announced her name to the press.

Her mother is Huntress and her father is Sportsmaster!

Okay, so her parents aren’t THAT high up on the supervillain list, but it’s still impressive.

Not only are these two her parents, but her father Sportsmaster was her sole ‘carer’ for 6 years while her mother is behind bars. (Carer is a loose term for Sportsmaster’s actual activities in those 6 years. If you’re not familiar with Sportsmaster, let’s just say he’s like the worst P.E teacher ever)

She really should only have two options- Choose to be an evil sidekick, or choose to be a bad guy. She decides on a third option.

This is what we call “The Picard Maneuver”.

When given only two options, both of which are not adequate for solving the problem in the way you think it should be solved, you create a third and much more satisfactory option.

This is one of the many ways in which Artemis Crock is an awesome lady.

At a young age, she not only decides her own destiny, she fights against the fate others are determined to decide for her. And this isn’t something she faces every now and then. It’s not like there’s one episode where she gets all angsty and says “Oh, whatever will I do? I love being a good guy, but am I just bad inside?” Then resolves everything by the time the credits roll.

Despite her own team mates often misjudging her, despite her sister and father both prodding (sometimes roundhouse kicking) her in the wrong direction, despite all of her set backs, this girl just does not give in.

Plus, she keeps her hair in a pony tail when she’s in fights.

You know why? Because when you’re kicking butt, you don’t want your fringe falling in your eyes. Ain’t no body got time for that. Not least, this completely undistressed damsel- Artemis Crock.