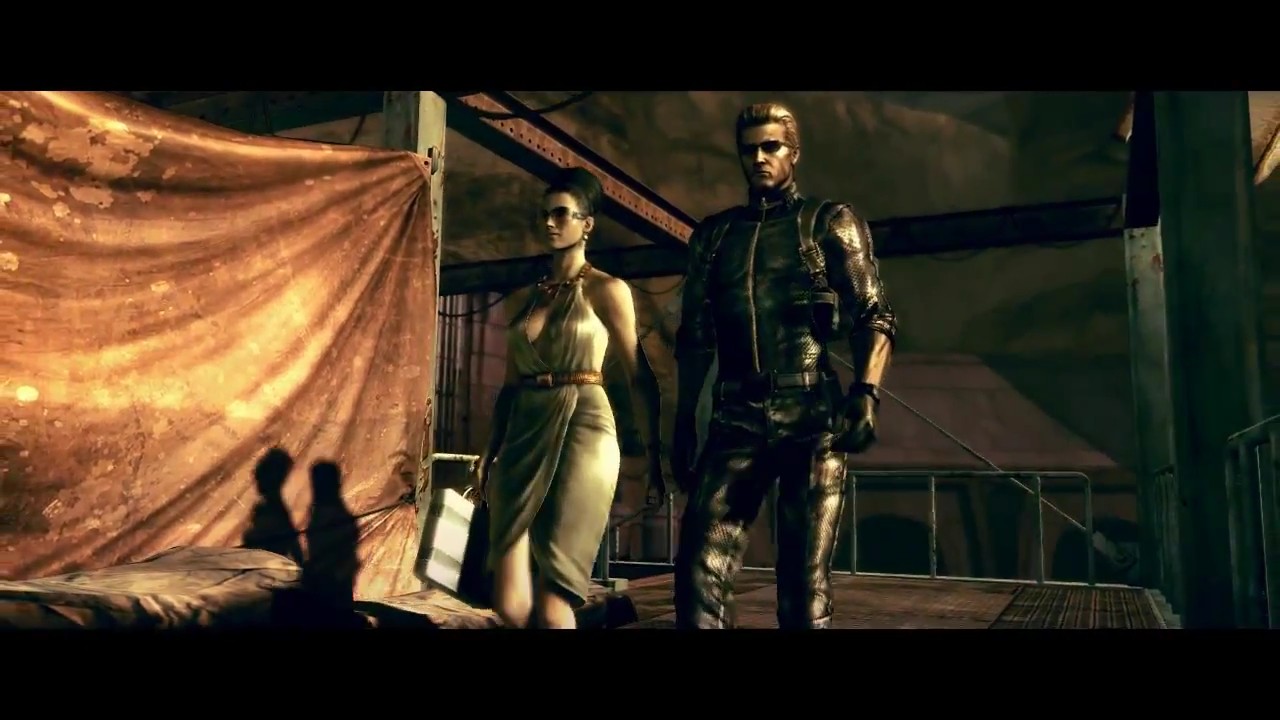 When it comes to Resident Evil baddies, most fans immediately think, “ZOMBIES!” But beyond the zombies (and monsters and Ganados and Majini and J’avo and—you get the idea) are the villains who get the Plot Ball rolling and are more often than not the reason behind those creepy crawlies hanging around. Grab your anti-B.O.W. Rounds (and stylish sunglasses) and join us as we count down the top five most memorable villains of Resident Evil:

Although Revelations‘s principle baddie turned out to be FBC head honcho Morgan Lansdale, many remember Jessica as the real star of the game’s villain ensemble. At first appearing dippy with few to no real thoughts in her head (aside from a desired hot date with series star Chris Redfield), Jessica revealed her true intentions when she set the Queen Zenobia—along with everyone aboard her, including Chris—to explode and destroy evidence of the ship’s biohazard infestation at Lansdale’s behest. But even that proved a ruse; the game’s epilogue and a recap of Revelations‘s events called “Jessica’s Report” (in which Resident Evil 5‘s Excella Gionne interviews Sherawat) unmasked Tricell as Jessica’s true puppet master—although whether or not that is a ruse in and of itself has yet to be seen.

Much like Jessica, Nicholai made nice with his team mates to get closer to his objective of gathering classified information before stabbing them in the back. Unlike Jessica, he didn’t bother getting the support of a third party hungry for the what’s-what he’d gathered; he did it all of himself, by himself, and for himself. Nicholai was part of Operation: Watchdog, a secret team of elite personnel sent into post-infection Raccoon City alongside the grunts to observe and record data regarding how well the B.O.W.s faired against trained soldiers (pretty darned well, it turned out; the government later nuked the city just to get rid of the monsters). Upon realization that the information that he held was so valuable that Umbrella would do anything for it—even pay oodles upon oodles of money—he decided to kill all of the other members of Operation: Watchdog and bribe Umbrella for all it was worth.

It’s hard to forget the shrill laughter of this villain, especially considering how beyond-normal his love for his twin sister Alexia went. Alfred and Alexia were created via a synthetic, incestuous union between the DNA of their father Alexander and his long-revered ancestor Veronica. From a young age, the twins displayed psychopathic tendencies, which culminated when they were 12—the age that Alexia created the T-Veronica virus, tested it on her father, and then tested it on herself. She would spend the next fifteen years in a comatose state while her body adjusted to the virus and her dearly devoted brother, who was racked with grief over the loss of her in his life, went insane from loneliness. In a plot twist similar to that of Psycho, Alfred became so overwhelmed with grief that he developed a case Split-Personality Disorder in which his other half was his over-hyped idea of Alexia. Until the vents of CODE Veronica X, he carried on conversations with his other half and even unknowingly dressed as her when the other half took over, completely oblivious to the fact that the real Alexia was only a plane flight away, awaiting her awakening.

The good doctor’s role in Resident Evil 2saw him betrayed by the company that had bred him to become the renowned scientist that he was and then nearly shot to death by its goons as he tried to protect his masterpiece, the G-Virus. It was this masterpiece that both saved and killed him; while he lied dying, he quickly injected himself with a syringe-full of the stuff and transformed into the ever-mutating monster that would stalk Claire and Leon throughout the whole of the game. He also slaughtered his would-be assassins, which led to the spill of the virus and complete infection of Raccoon City. Adding to the tragedy of the tale were William’s wife Annette, who also lost her life trying to protect her husband’s work, and their daughter Sherry, who ended up infected (but cured, thankfully), orphaned, and in the clutches of the United States government.

Let’s be honest here: when you clicked on the link to this article, you knew this guy would end up in the top spot. And for good reason, too: since the first game (which was released way back in 1996), Wesker has haunted the background of Resident Evil, coming forward only once in a while when it suited him and his purposes. The end of Resident Evil: the Umbrella Chronicles alluded to his ultimate goals, ascension into a biological “godhood” and world domination, which the combined efforts of Chris Redfield, Sheva Alomar, Jill Valentine, and other members of the B.S.A.A. averted in Resident Evil 5. Wesker’s defeat resulted in his death. But still his presence—and the suffering and trauma that he caused—is felt in the games, including Resident Evil 6, which introduced his biological son, Jake.