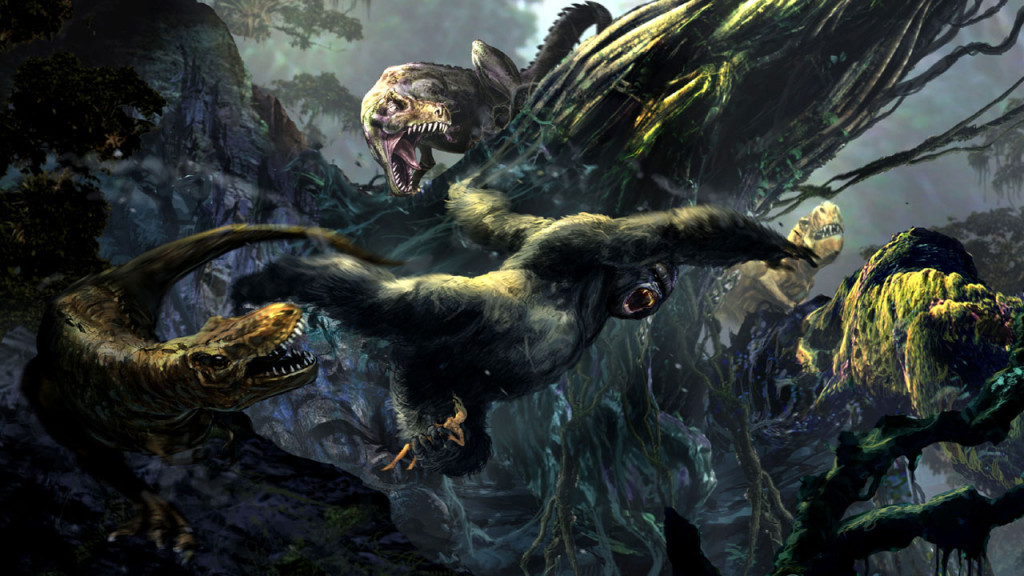 British actor Tom Hiddleston is quickly rising to science fiction/fantasy stardom after his success as Loki in the Thor and Avengers movies. Next he will be tackling the legendary King Kong in upcoming film Skull Island.

Legendary Entertainment’s Skull Island was announced with a surprise trailer at Comic-Con 2014. The trailer shows a tropical island full of dinosaurs and primates, giving us a glimpse of Kong’s dangerous homeland as he fights for survival in a realm of predators. Some of the creatures are fantastically unrecognizable (i.e. giant toothed worms), so we know that this world is somewhere off the edge of the map. Here there be monsters, indeed – any kind of monster you could wish for, including giant spiders and vampire bats. And if there’s any doubt about what this film is about, the giant gorilla beating its chest at the very end should be enough to make it clear. Throw the charming Tom Hiddleston into the mix, and it can’t be anything else but a hit.

This film will follow the recent remake of Godzilla and the upcoming Jurassic World, continuing the trend of rebooting iconic monster films. According to Screen Rant, Legendary described the film as “based on the famed Skull Island, the cinematic origins of another classic beast King Kong.” The movie will be a follow-up to Peter Jackson’s (The Lord of the Rings and The Hobbit trilogies) 2005 remake of King Kong, and so far all we know about the content is that it will be an “origins” story of sorts, focusing on Kong’s home – which, according to the trailer, seems to be full of danger and mystery. Jackson’s King Kong received mixed reviews despite its high budget, although it did become the fourth-highest grossing film in Universal Pictures history as well as winning several Academy Awards for sound and visual effects.

We can expect the visual effects for Skull Island to be even more spectacular, if the trailer is anything to go by. According to Entertainment Weekly, Legendary Pictures stated that “previous works have touched on the island, but staying on and exploring this mysterious and dangerous place offers Legendary the opportunity to take audiences deeper inside this rich world with a style and scope that parallels other Legendary productions.” Max Borenstein, who wrote the screenplay for the recent Godzilla reboot, wrote the script for Skull Island, and while Joe Cornish was originally considered as a possible director, he turned the project over to Jordan Vogt-Roberts. Tom Hiddleston has been cast as the lead, but other than that it’s too early to know who else will star or what we can expect from the plot.

Hiddleston is doing well for himself, with his upcoming role as Hank Williams in I Saw the Light already gaining lots of attention. Depicting a country legend will be a new kind of role for the actor, and it’s great to see him branching out and taking the leading spot in his latest films. He will also be starring in Guillermo del Toro’s upcoming horror film Crimson Peak, replacing Benedict Cumberbatch as the lead.

Producers of Skull Island are aiming for a release date of November 4, 2016.