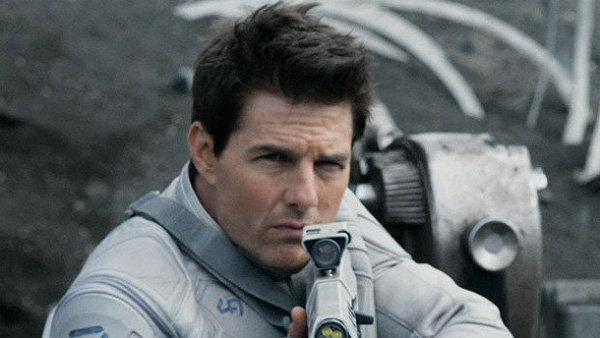 Off the top of my head, I can’t think of any actor in Hollywood who garners such a mixed response from both critics and movie fans as Tom Cruise. Virtually all of his films that have been released in the past decade are met with articles questioning the star’s box office pull. Sure, some of these questions are legitimate. “Jack Reacher” never got rolling with audiences domestically and “Rock of Ages” pulled in less money than my seventh grade production of “Annie.”

So with “Oblivion” hitting theaters on the 19th, there’s a very real possibility that another Cruise film will be a box office dud. But in a fair world, that won’t be the case. During a 30+ year career, Tom Cruise has built up a sci-fi filmography that deserves some attention. There aren’t a ton of projects, but the ones he has made are strong efforts. Sci-fi legend and Tom Cruise aren’t usually two things mentioned in the same sentence, but maybe it’s time they should be.

When all is said and done Tom Cruise will probably be remembered for his run as super-spy Ethan Hunt in the “Mission Impossible” films. We hear those titles and we automatically think action. Ethan suspended from the ceiling inches from the alarm rigged floor or climbing the world’s tallest building. However, a great majority of those plots are built on technologies that do not actually exist, which makes them science fiction. According to Box Office mojo, the second and fourth installments of the franchise earned over $200 million in domestic box office receipts. So not only is the franchise sci-fi, it’s incredibly successful. $2 billion worldwide for four films isn’t too shabby.

But none of them are Cruise’s most successful effort. That designation belongs to a run in with aliens, the 2005 remake of “War of the Worlds.” The years since the film’s release have not been kind to its legacy. It’s largely remembered for its sudden and anti-climactic ending, but whenever that comes up in conversation, I suggest people read the book it’s based on. Even on the usually pessimistic fan grading site Rotten Tomatoes, “War” has a decent 74% fresh rating to go along with its $591 million worldwide.What’s that you say? You want more geek-worthy science fiction? Well how about a Phillip K. Dick adaptation? “Minority Report” is loosely based on Dick’s short story, but it has proven to be one of Tom Cruise’s most acclaimed films with a 92% fresh rating.

Like “War of the Worlds” “Minority Report” happened to be directed by Steven Spielberg, but let’s just pretend that had nothing to do with their success. The film is chock full of futuristic gadgets and concepts with Cruise’s character trying to clear his name after he is accused of a pre-crime. In the film, psychics identify crimes before they happen to create a peaceful environment.So now we’re at the upcoming “Oblivion.” Cruise plays a man on an abandoned Earth with the job of collecting some of the remaining natural resources.  But when he realizes things aren’t completely as they seem, he questions his position. The trailers are filled with sweeping landscape shots of an uninhabited Earth, destroyed human made structures and Cruise attempting to look like an everyman by wearing a Yankees hat with his spacesuit.

The film should do relatively well without any huge competition opening against it and an accompanying IMAX release that always boosts box office numbers a bit. Of course, that is all contingent on people going to the theaters. With Tom Cruise’s sci-fi pedigree, this one is definitely worth a try. Plus with every commercial and trailer including a dramatic Cruise yelling, “Who are you!?” I’m pretty anxious to find out who they are. They’re probably just some paparazzi asking how Suri’s dance class is going.