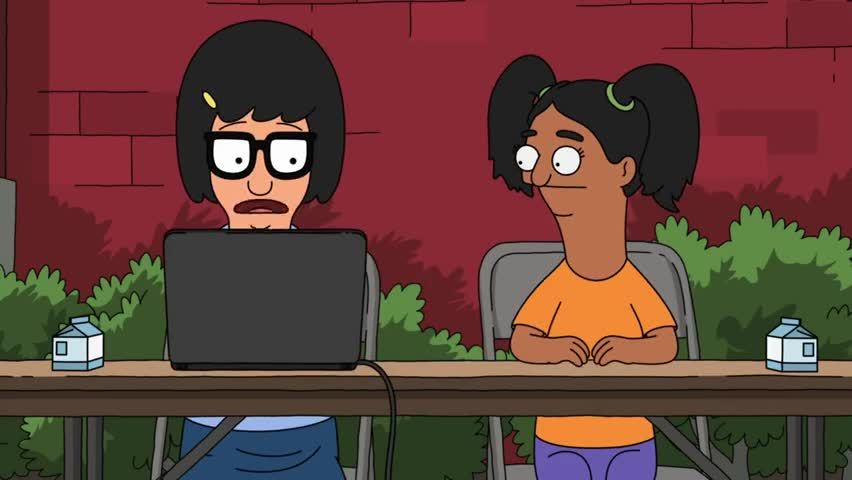 Animated sitcoms don’t exactly lend themselves to character development. The characters rarely get any older no matter how long the show stays on the air, so we can’t really expect them to learn much of anything. But there are exceptions to every rule, and Tina Belcher actually seems to be growing up before our very eyes (despite being in middle school for nine years). She brings a very mature viewpoint to this week’s episode that most adults still struggle with: life is all about taking chances.

Let’s face it—we’re all chickens when it comes to risk taking. That’s why there are so many goofy inspirational sayings we use to motivate ourselves:

As you might have guessed, I’m not really a “jump off a cliff” kind of guy. I guess I’m kind of like the Belcher’s new classmate Henry (voiced by the one and only Jim Gaffigan) in that regard–why try to contact the aliens when there’s a really good chance that a highly advanced civilization is just waiting for some stupid creatures from a planet like Earth to give away their location. That would just make it easier for the super-smart extraterrestrials to take over our planet. Or eat us. Or both.

So Henry convinces Tina and Susmita that it’s just not worth the risk. Of course, he uses a bit of trickery (and Gene and Louise, who are both willing to help him for frozen yogurt) to sabotage their science fair project and make it look like the aliens have made contact—and that they’re angry. But when his plan is exposed as a hoax, it has a different effect on the two young scientists (okay, one young scientist and one boy-crazy girl who’s really good a making science fair boards). Susmita sees it as a sign—maybe the aliens really are hostile, so why tempt fate?

Tina, on the other hand, looks past the possibility of starting interplanetary war and realizes that, while it’s possible that the aliens will attack, it’s also possible that they’re friendly and will come to our aid when we need it. Because the time is fast approaching (at least according to the other science fair projects) when we’re gonna need some help from our galactic neighbors just to survive.

Of course, all this alien stuff is really masking what’s really going on. Susmita’s afraid to let Henry know she likes him. But Tina’s learned that taking chances and letting people know how you feel is the only way to live. How does she spend what she thinks might be her last day on Earth? Letting her family know how much she loves them and kissing as many boys as possible. Was it worth it? I think she’d say it was. Maybe not kissing Zeke. But everything else was great.

How to Stream Netflix from Anywhere in the World