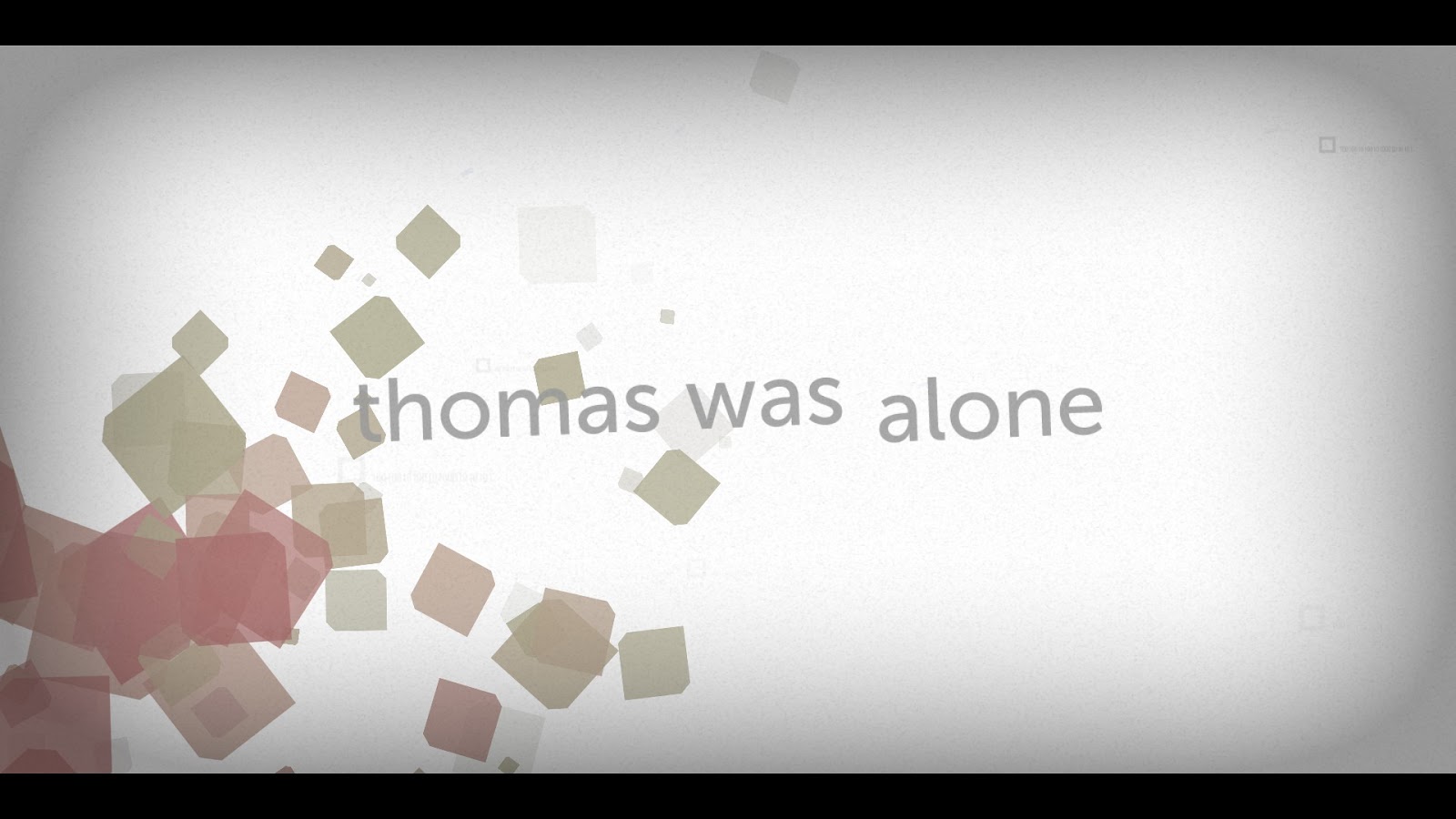 Thomas Was Alone is a bit of a strange game.

It’s self described as a minimalist puzzle platformer about friendship and jumping. The jumping part isn’t terribly surprising, considering how it would be rather difficult to make a platformer without a means to move around, but the rest of the game is rather pleasantly surprising.

In fact, there’s a whole lot more to the game than first is apparent. It’s not just another Mario clone where you run and jump to the end of the level only to find that the princess is in another castle. No, both the gameplay and the story are much more in depth than that. Not only are you required to control up to seven different characters at the same time, but each of these characters has a different ability or characteristic that makes them unique and useful in different situations.

Except for Chris. Chris is just kind of… there.

Anyway, where most games would (and do) stop with gameplay mechanics, Thomas Was Alone takes the time to craft a deep and meaningful story, which really is the reason you stick around. While the gameplay is charming and unique, it’s really not varied enough to have long term holding power. Generally it consists of getting your quadrilaterals from one end of the level to the other, traversing various obstacles in your way. These obstacles come in various forms, like toxic water and spikes, but they all pretty much kill you instantly, forcing you back to the very beginning. While this does make for some interesting and, at times, rather frustrating gameplay, there’s nothing about it that’s really immersive or intense.

No, in a game like Thomas Was Alone, you come, and stay, for the story.

Thomas Was Alone is the story of Thomas, who was alone. Not for very long, though. In fact, he very quickly finds friends to accompany him on his journey up and to the right. These characters, all with their unique personalities, help Thomas to traverse ever more challenging terrain in his quest to progress ever onwards. In that way, the story of Thomas Was Alone is a story about disparate characters coming together and overcoming challenges that are greater than they are.

In that way, it’s the game is a little bit like life. You start out without any clear indication of where you are or what you should be doing. You meet friends with various personalities and together you overcome whatever life throws at you. Stick together long enough and maybe, if you’re lucky, you’ll eventually find something that’s worth dying for.

Anyway, the only real downfall of the story is that it is all told to you on the part of the narrator. There is almost no actual story content in the game itself, only this silky smooth British voice acting as the inner monologue of each of the respective characters, telling you what they’re thinking and feeling at the moment. In any other game this form of storytelling would fall flat on its face. There’s just not enough there. However, with the minimalist visual design and themes, Thomas Was Alone seems to do just fine.

The characters are the real strength of the game, however. Despite having no real voice of their own, the narrator, Danny Wallace, does such a delightful job of giving them all personalities that you start to mime each of the characters in your head. Mostly it’s just Chris complaining and being snide to everyone, but it’s still rather amazing that such simple, minimalist characterization can have such a profound impact.

Thomas is the first quadrilateral you meet, and is fairly average in all respects. He can jump a surprising distance, and is slightly taller than he is wide, but he will be the benchmark by which you judge all the other characters. He quickly becomes the de facto leader of the group, pushing them ever onwards. During the first part of the game, this is mainly to simply satisfy Thomas’ insatiable curiosity and indomitable spirit, but about halfway through the game, the merry company of quadrilaterals finds an actual purpose to their journeys. It’s through Thomas’ leadership that they are able to accomplish this goal, and eventually become the Architects, saviours of AI kind.

Chris is the second character you meet in the game, and probably the one that I sympathise with the most because, unlike Thomas, he’s very much useless. The only thing that really makes him unique is his incredible snark, but that doesn’t get you very far in a platformer. In nearly every level that’s narrated with his voice, he’s either complaining about something or making some snarky comment about one of the other characters. This does very little to make him endearing. This is only made worse by the fact that he has no interesting ability, and can’t jump worth a damn. He’s only really useful when there’s a switch hidden somewhere that none of the other characters can fit. However, given his incredibly limited jump (and stature), you’ll more often than not find yourself dragging Chris along to the exit, hoping you don’t forget him somewhere along the way.

John, on the other hand, is one of the best jumpers in the game, second only to Sarah. However, he is a bit of an arrogant bastard, a prima donna of the first order. He’s like that cocky college basketball player who never could get over himself. While he is incredibly useful to have around, due to his height and ability to reach places nearly no one else can reach, he also gets on your nerves fairly quickly. By the end, he’s a little better, but not really by much.

Clair is a bit… different from the rest. She’s a perfect square, just like Chris is, but significantly larger. Just like Chris, she can’t jump worth a damn, but who needs to jump when you’re a superhero? Not Clair, certainly. No, instead of jumping, she majestically floats across the water like a great swan. Or goose, maybe. Still, her ability to ferry her non-superpower imbued friends across large bodies of water is invaluable in a surprising number of levels.

Where Clair is ostentatious and a tad overbearing at times, Laura is almost exactly the opposite. The second of three ostensibly “female” characters (although how AI’s have gender is a bit beyond me), she has trust issues. Everyone always abandons her in the end. They come, they bounce on her to get to slightly higher ledges, and then disappear the moment her back is turned. Using her like a trampoline, and throwing her away when they don’t need her anymore. She feels so lost, so heartbroken. Why don’t they stay? Is it something she did? Something she said? Do they find her strange ability to make them jump higher disturbing? Couldn’t be because of that strange black cloud that keeps following her everywhere, though. That would be unreasonable.

This, of course, makes him incredibly useful in solving puzzles, while also being one of the more challenging characters to use. While not quite everything is inverted when you use James, jumping down and falling up does take some getting used to.

The last character to join your posse is Sarah. She’s the smallest of the bunch, but makes up for it in attitude. And with the fact that she can double jump, which allows her jump even higher than John. When you meet her, she’s looking for the Fountain of All Knowledge and agrees to help the group to find it, even though she finds the rest, especially Thomas, to be rather foolish. Still, she’s one of the most useful characters around on account of her ability to get nearly anywhere. She’s like Chris and John combined! If Chris were actually useful, that is.

Playing Thomas Was Alone is like taking a game controller to an art museum and plugging it into one of the paintings from the minimalist section. It’s simplified down to the most basic level; the characters models are all simple quadrilaterals, and the level designs are as simplistic as the main characters. Even the dangers have been reduced to the lowest common denominator.

This gives Thomas Was Alone a sense of simple elegance. There is no visual element that is any more complicated than it needs to be, and yet everything that you need to know is instantly communicated. Spikes and elevators alike are both readily accessible to the player. Even the death animations of the various AIs are beautiful and powerful, though still frustrating.

All in all, despite probably being one of the simplest games you will ever play, Thomas Was Alone is probably one of the most beautiful. Not simply because of its visual design, which is wonderful all on its own, but because of the strength of the AI’s you play, the stirring story, and the effortless characterization. Go track down a copy.