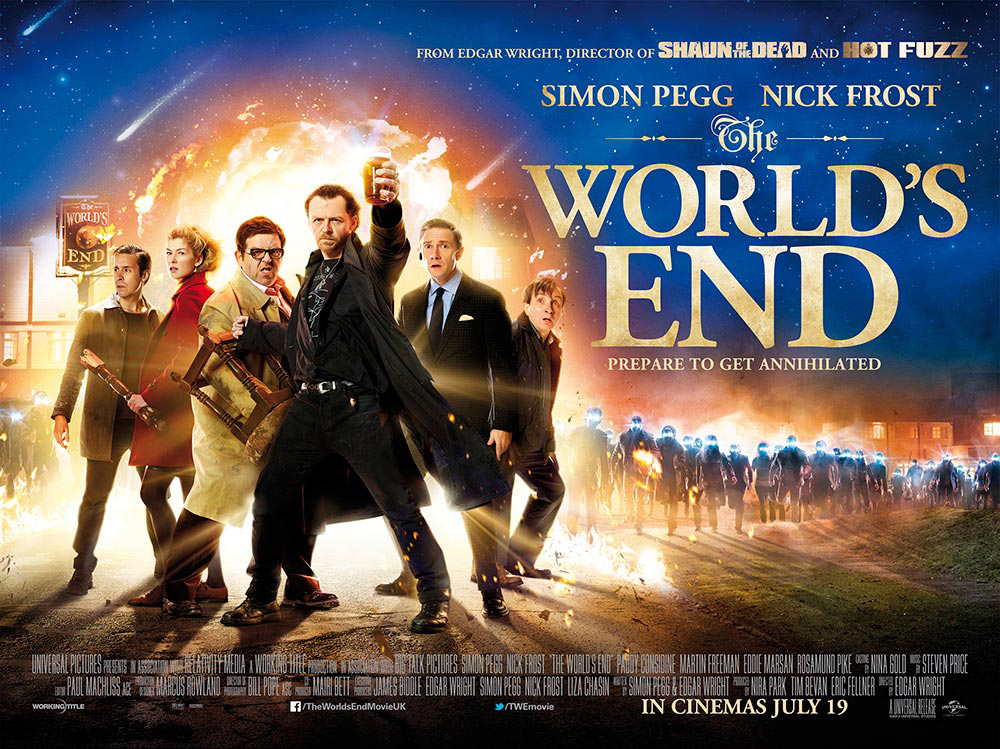 Expectation can cripple even the greatest artistic projects, and that’s quite unfair when you consider that sometimes expectation can be an unreasonable so-and-so. No one in the world better knows this than Edgar Wright, Simon Pegg and Nick Frost, a visionary writing/acting/directing trio who’s debut film, Shaun of the Dead, became the movie equivalent of Appetite for Destruction.

Part buddy movie, part rom-com, part reinvention/homage of the zombie movie genre, it played fast and loose and fired gags and nerdy references at the screen like Comic Book Guy with a minigun. Then came Hot Fuzz, which proved that difficult second albums can actually be pretty effortless. It was riotous fun, mashing together jokes, violence, murder mystery and reinventing a well-worn blockbuster formula – this time, action flicks where lead characters are only allowed to say cool one-liners and everything must either be shot or blown up – all with a very quirky, very British filter on it.

So now here comes the final part of the Cornetto Trilogy. We are two brilliant films down. When I went to see it on release night, it was part of a screening showing all three films back-to-back, so we had a fresh reminder of this monstrous legacy. One it can’t possibly live up to, right?

Well, yes and no.

A plot summary: Pegg plays Gary King, a thirty-something bloke who still thinks he’s eighteen. Literally. He wears the same clothes, says the same things, drives the same clapped-out old car and listens to the same old 90s indie-rock mixtapes. And is still obsessed with finishing an epic pub crawl in his home town that he and his old school friends failed to complete: The Golden Mile. Twelve drinking establishments, a pint (at least) in each, concluding with the titular World’s End pub. So he gathers his old crew back together for another attempt at it. Considering that his old mates are now mostly married with kids and in high-flying careers, it does make you wonder why they’d want to head back to a small town with a prat who stopped growing up around 1992 – indeed old pal Andrew (Nick Frost), now a solicitor, is openly hostile towards him. Oliver (Martin Freeman), Steven (Paddy Considine) and Peter (Eddie Marsan) complete the old gang who grow bored just three pubs into the crawl.

But then the film remembers that it needs to introduce a Hollywood genre to really kick things into gear, and does so by explaining that the real reason why no-one remembers Gary King or his mates is not because everyone just forgot about them – they’ve actually been replaced by robotic drones who look no different on the outside, but are actually servants of a mysterious sci-fi overlord called The Network which aims to enslave humanity either by coercion or simply deleting your original form and replacing you with a drone copy. So a dull pub crawl suddenly becomes a fight for survival against rapidly encroaching enemies who look no different to their human versions – until you smash their heads open and blue liquid pours out. 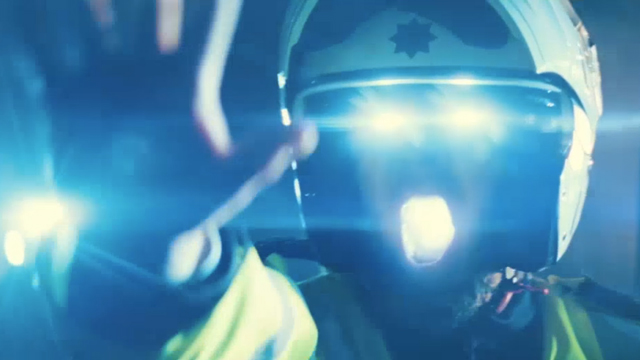 You may have noticed a few times in that summary the presence of a few plot holes. The Cornetto films generally play things fast and loose, but this one is too fast and too loose for it’s own good, belching out plot turns with not enough explanation. I’m not entirely convinced that the corporate business folk King’s old friends have become would be so easily persuaded into a messy trip down memory lane – not when at home is a comfy bed, a widescreen TV and a BMW on the driveway. Then we have their solution to avoiding death by drones, which is…to continue the pub crawl to the end. Some weak rationale is given about not alerting suspicion, which holds up like a rotting old shed – then promptly falls apart when the drones clock on to them and turn hostile anyway.

So what’s keeping them from just legging it and going home to the wife and kids? And without wishing to spoil, the ending is a bit…OTT. Sure, maybe they didn’t want to do another ‘and they all lived happily ever after’ scenario like the previous two, and it’s not quite Hideo Kojima levels of pretentious nonsense, but still…see for yourself and see what you think. Me? I’m still not sure I entirely liked it. At least it gives the trilogy a nice closure – it’s hard to know how they could raise the stakes any higher after this. And on that point, keep your eyes peeled for the obligatory Cornetto reference in this film – it’s a gem. 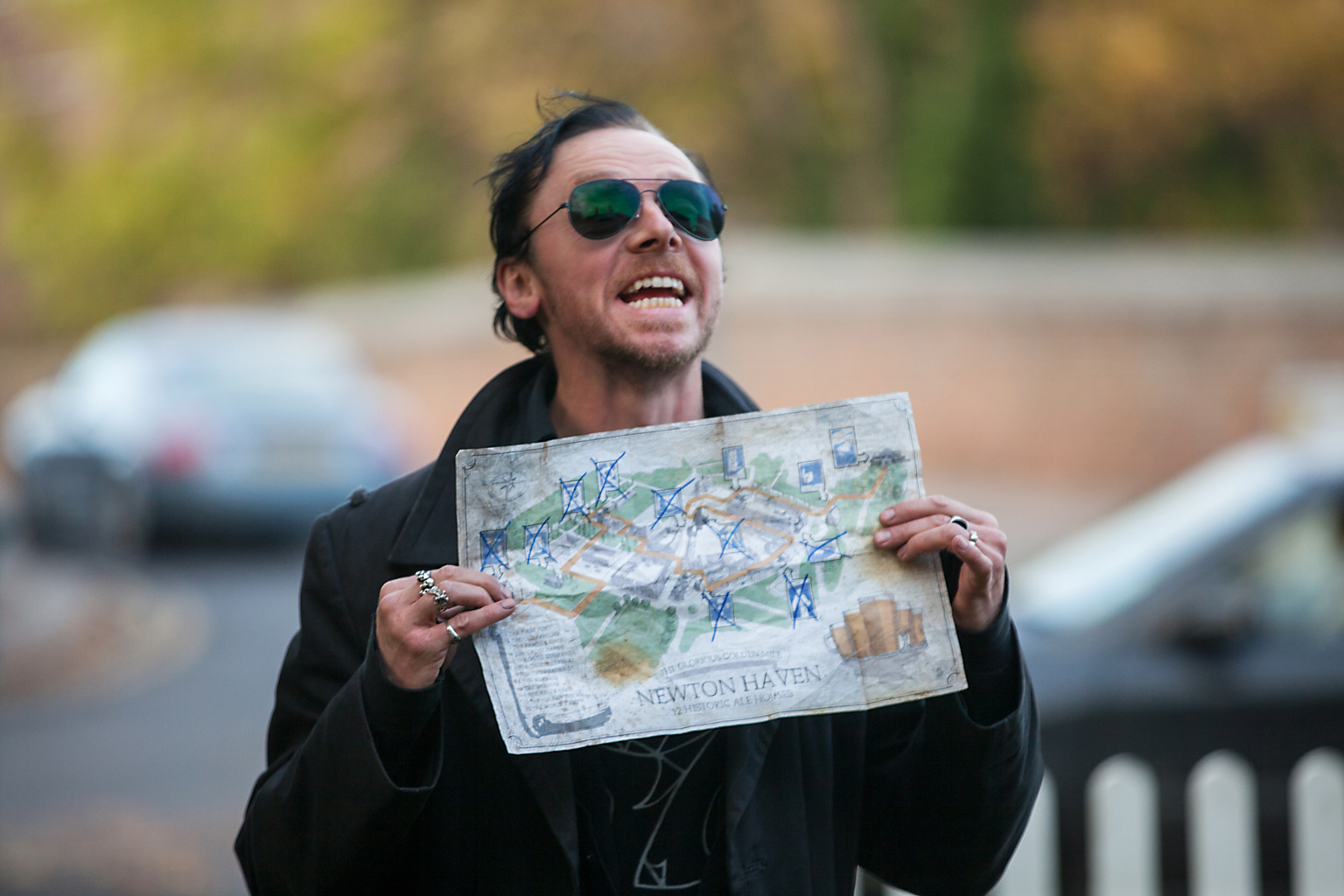 All of this leads to the film’s biggest problem – balancing story and balls-to-the-wall action. Shaun of the Dead managed it perfectly, and by balancing zombie-smacking with effective characterisation it lead to us really emphasising with the lead character’s arcs and struggles – who wasn’t moved when Shaun was faced with having to kill his own mum before she became a zombie? It gave effective emotional weight to the plot and made us really care about the people on screen as they battled the ever-encroaching zombie hoards. Hot Fuzz didn’t quite manage the same thing, going for more of a focus on murder mystery and cliched action film plot twists. The World’s End just doesn’t get the balance right – too many smashed chairs, not enough time spent with the characters getting to know them.

Which is frustrating because the five (five!) leads are some of the deepest and most rounded characters in the whole trilogy, and even in the limited downtime in between punch-ups we really become invested in their character arcs. Identity is a big theme this time around, and the passing of time and growing up. How do you respond to it? Do you become a mindless drone (literally)? Do you try and recapture the glory days that maybe weren’t even that glorious? Try and rectify the mistakes of years ago that still nag away at you no matter where your life has gone since then? Perhaps it’s the filmmakers themselves acknowledging that as glorious as the Cornetto Trilogy has been, for better and for worse it’s coming to an end and it’s time to move on whether we like it or not. The masses of spectacular fights and gags are one last encore full of fireworks and panache that the band really don’t want to end but know they must before they become bloated pastiches of themselves.

Even more so than previous films, Pegg’s lead hero is deeply flawed but ultimately likeable – you spend most of the movie thinking Gary is an irritating arse, and though the reasons why he never grew up are explained (partially) in a moving scene just before the final showdown, he never quite finds redemption at the end of the hero’s journey. But despite it all you still laugh at his jokes and cheer when he stands up to the Network. He swaps roles with Frost, who becomes the mature, level-headed leader and pulls it off in a way some thought Frost just couldn’t do. He’s almost upstaged by Considine and Marsan, who come close to stealing the show. And the rest of the cast is the usual litany of British acting talent – Rosamund Pike could’ve done with a bit more screen time as Gary and Steven’s teenage crush who ends up ‘stepping back in time’ with the rest of them, and their love triangle sub-plot never finds space amongst the punch-ups and flying pints to really get going. Pierce Brosnan’s cameo as a teacher converted to the dark side is just wonderful, as is Bill Nighy’s appearance as the voice of the omnipresent Network.

And despite it’s flimsy plot turns and lack of balance, this is overall a brilliant film – just about. It feels like riding in a caravan being towed by the Millennium Falcon on hyper-drive. It sways and wobbles and threatens to fall apart at any moment, but the sheer breakneck speed of the thing still leave you breathless once it’s all over. The usual kinetic cuts and whip-pans are present, and the fight scenes have a fantastic sense of weight and ‘bang, crash, wallop’ to them. As much as Hot Fuzz’s gun-play was entertaining, it’s nice to be back in a world where any blunt object gets used to smash an enemy in the face and through tables like a riot broke out backstage at a WWE event.

But most importantly, the cocktail of carnage, believable characters and gags works yet again. Just like you did when you saw Shaun or Fuzz for the first time, you wind up laughing at the sheer madness of it all, and how a film can manage to hang together without buckling under the weight of it’s own ridiculous juxtaposition and liberal spewing of jokes. You laugh time and again, you cheer, and maybe you cry. But crucially you come out with a massive grin on your face and a desire to fire quotes from the movie at every passer-by you meet. Never have I laughed so much at a trio of films since the first time I saw the Naked Gun movies, and all the Cornetto Trilogy films are worthy of consideration alongside the great genre spoofs such as Airplane!, including this one. In truth, The World’s End is probably the weakest of the three. It’s not quite as tightly constructed, the plot is patchy, and sometimes it feels like the viewer is being hurried along when we’d rather stop for a breather and a bit more time to get to know the characters. But really, if Shaun was “Bohemian Rhapsody” and Hot Fuzz was “Another One Bites The Dust,” The World’s End is more “We Are The Champions.” It’s a deliriously pompous and garish celebration of the end of an era, and as much as we the viewers are like Gary King, wishing the glory days will go on forever, we and the filmmakers know that for better or worse this is the endpoint. As a standalone film it’s an absolute riot. As the conclusion to a trilogy? It’s the Book of Revelations. The final encore of the farewell show.

T-Shirts Get Villainous With Villain X