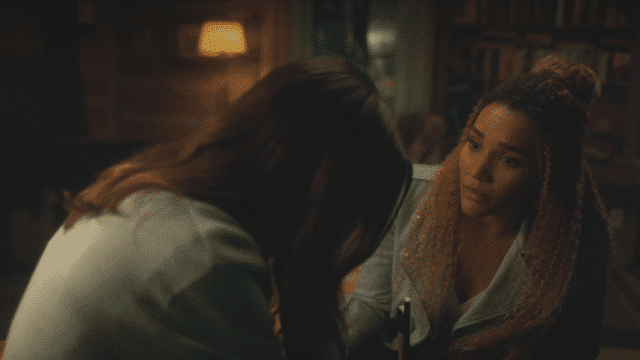 I have not, until this moment, reconciled with the notion of disclaiming spoilers. It seems abundantly clear that they will be discussed. But today and for this episode I am going to directly, loudly, full-throated, and emphatically state with a bullet: SPOILERS. Big ones. This episode breaks the dam that absolutely floods the chaos of the end of the season. So get ready, cause I’m about to spoil some shit. Starting with:

This Episode is a Horror Show

It opens with a flashback to Allison telling her daughter, Claire, a bedtime story about the adventures of the Umbrella Academy. Because The Umbrella Academy the show has the same work ethic as the Umbrella Academy, the crime fighting unit, it is never lazy, and though you may not have expected a truly whimsical and beautiful animated sequence, good news, you get one, telling the time that the young Academy foiled a museum heist.

Allison starts the story: “It was a dark and stormy night,” which since time immemorial has presaged some spooky derring-do. We are being told immediately that this episode will get dark, immensely so, and nowhere more than in Alison and Vanya’s combined story. As Vanya starts to channel her powers, she also begins to regain some of her repressed childhood memories. Enough to remember that Hargreeves locked her in an underground bunker, separate and alone. Present tense Vanya is playing her violin alone in Leonard’s cabin (an isolated cabin in the woods? Nothing scary to see here, folks, keep moving along….) when Alison at last finds her, having discovered that Leonard payed the local shit-kickers to rough him up, in the hopes that it would trigger Vanya’s latent powers. Abetted with a copious amount of cheap beer, things had gotten a little out of hand in the actual execution, causing Vanya’s power surge, and leaving only one living witness (who we learn by the episode, Leonard dispatched of post-haste). Allison tries to tell Vanya, but Vanya’s received an awful lot of new information over 24 hours, and it’s hell all to process. But Vanya’s not the only one unlocking childhood memories.

Talking to Vanya reminds Allison of a time as a child she was taken down to see Vanya in her bunker. The children had been told she was sick. Hargreeves had her tell Vanya a rumor that she thought she was ordinary, effectively binding her powers. Allison, present tense, immediately comes clean with Vanya, finally realizing what it meant, and this is your last chance, because I can’t say it enough, massive spoiler: and in a fit of new power and rage, Vanya cuts Allison’s throat with her violin bow.

We Are Our Own Worst Enemies

This episode dips its toe deeply into the notions of personal responsibility – where it lies, and the definition of its limits. We learn early on that most of Allison’s life was defined by things she rumored into being. She rumored her career into existence, she rumored her child into obedience, and it is strongly suggested, she rumored her husband into love. The show begins with Allison as much a recovering addict as Klaus becomes. She’s off the stuff, cold turkey. No more rumors. She has many opportunities in this episode to give into the temptation of the ease of the rumor.

When she is accompanying a small town cop around to get information about Leonard and the attacks that unleashed Vanya’s powers, she could have easily just said “I heard a rumor that you wanted to tell me everything.” But Allison is holding herself accountable. It would have been easy enough to say that she had no choice, that it was for Vanya’s sake and that time was of the essence. Instead she glamored the man with her innate charm and the blush of getting to spend the day with a hot movie star. He too had a choice. And with our boys, Pogo confirms what Klaus tells Luther and Five – that Hargreeves killed himself to create a false mystery that would tingle the Academy’s sleeping Scooby sense, and bring them together in time to stop the apocalypse.

Pogo tells them that he had no choice. Luther counters that there is always a choice. In this particular case, Luther does not realize that the choice he has made – his rigid and inflexible moral code – alienates him, and makes him deaf to anything else Pogo, someone he loves, might have to say to him. But would Luther see it as a choice? And finally, our Vanya is truly the example of what happens when there is no choice. Her powers were not something she opted into. Nor did she agree to them being taken away from her. Leonard triggers and unlocks them by stealing and destroying her pills, taking away even more agency. When she finally feels some power, when Allison threatens to take those powers again, Vanya at last gets to make a choice. She cuts Allison’s throat and does to her the exact thing Allison had done to young Vanya. She takes away her power.

It All Comes Back to Sisters

I have low-key been arguing from the beginning of the series that the most important relationship in the show is Vanya and Allison’s. I will grant that I come at this from the perspective of someone with sisters – one biological, one in-law – who she is in good standing with. But you paid your dime, you gets my opinion, them’s the breaks. Though Vanya thinks that Leonard is the only person to ever love her for what she is, the reality is that Allison is the purest love in Vanya’s life. She stays in that cabin even when Vanya’s powers start to manifest, despite the dangers to herself. But there’s also an honesty to the uglier parts of their relationship. Yes, they are sisters who love each other very much. But that also summons with it all the complicated, murky aspects of sisterhood.

They were raised two girls in a family of boys. When Vanya accuses Allison of having been threatened by her powers challenging Allison’s supremacy, it’s not hard to parse the subtext. There can only be one alpha female. The most loving sisters cannot avoid competition. It’s bred into society, our DNA. But the only hope for Vanya – for controlling what is larger than her (and ok, it’s Ellen Page, she is the tiniest thing in the world, so everything is larger than her) is the genuine love of someone who is willing to put themselves at risk. Someone who points out that she never considered Vanya ordinary. It’s worth noting that the rumor young Allison tells young Vanya isn’t “you are ordinary,” it’s “you thought you were ordinary.”

There are only two more episodes to go, and oh dip, there’s so much that happens in them. We’ll meet up tomorrow to discuss episode nine. I have thoughts.