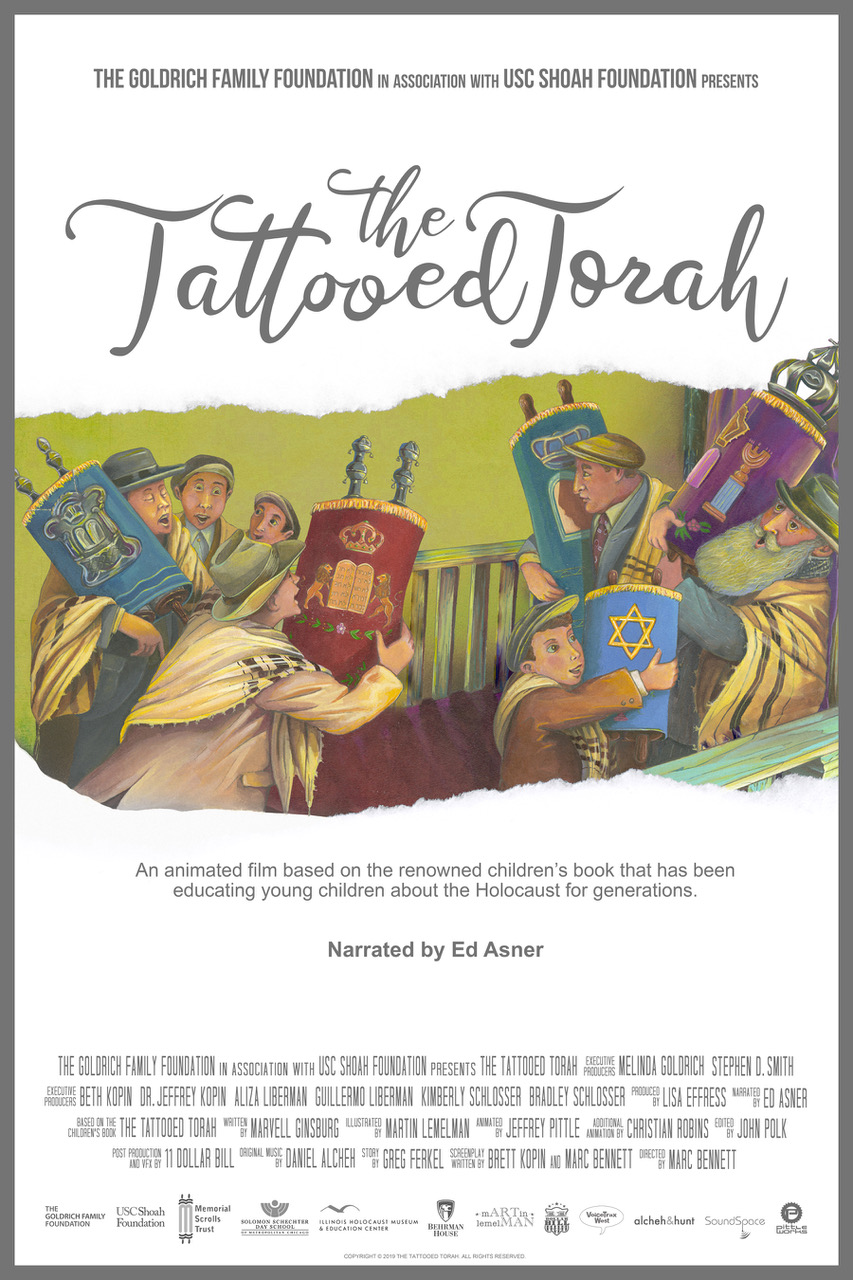 Over the last three decades, the beloved children’s book by Marvell Ginsburg, “The Tattooed Torah,” has been a powerful resource for Holocaust education for children all over the world. The book recounts the true story of the rescue and restoration of a small Torah from Brno, Czechoslovakia, and teaches the Holocaust not only as a period of destruction but also as an opportunity for redemption.

THE TATTOOED TORAH has so far appeared at 25 prestigious film festivals world-wide including the Academy qualifying Aspen Shortsfest and HollyShorts and scored four wins including Best Animated Short, Best Adaptation and Award of Excellence.

The adaptation of THE TATTOOED TORAH into an animated short film is a three-generational endeavor, initiated by Marvell Ginsburg’s daughter, Beth Kopin, one of the film’s executive producers, who first dreamed to transform the book into a film, and Beth’s son Brett, the co-screenwriter of the screenplay, a rabbinical student in Los Angeles.

THE TATTOOED TORAH is presented by The Goldrich Family Foundation in association with USC Shoah Foundation, executive producers Melinda Goldrich and Stephen D. Smith, produced by Lisa Effress of 11 Dollar Bill, featuring illustrations by Martin Lemelman and animation by Jeffrey Pittle and Christian Robins, with an original score by Daniel Alcheh and recorded by The Bow Tie Orchestra and Choir of Moscow. It was co-written by Brett Kopin and Marc Bennett, with story by Greg Ferkel, directed by Marc Bennett and narrated by Ed Asner.

Online – Tickets are FREE but REGISTRATION is required.

Immediately following the screening of the 21-minute short film, attendees will be able to participate in a live, virtual panel discussion and Q&A session with the filmmakers and narrator Ed Asner. The event will be moderated by Stephen D. Smith, the Finci-Viterbi Endowed Executive Director of the USC Shoah Foundation and the UNESCO Chair on Genocide Education. Smith is committed to making the testimony of survivors of the Holocaust and of other crimes against humanity a compelling voice for education and action.

Additional information on THE TATTOOED TORAH can be found at the film’s official website: https://www.thetattooedtorah.com

The Dark Web and the Story of Dread Pirate Roberts

Turning Your Nerdy Passion Into A Successful Business: A How-To Guide For Novice Entrepreneurs