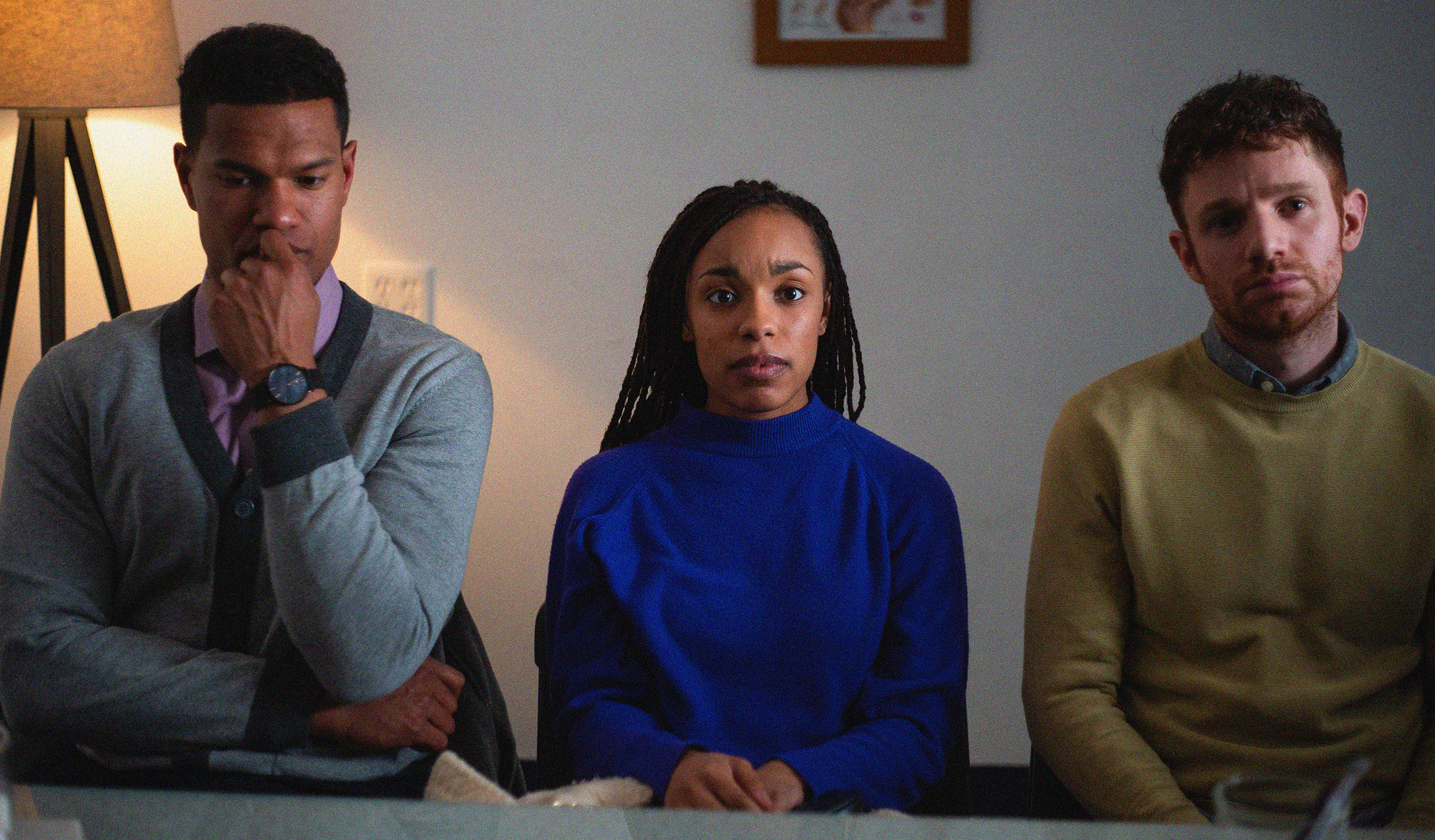 Monument Releasing will be partnering directly with theaters and cultural organizations

“A great moralist drama. Jeremy Hersh’s beautiful and brutal film.. gets both harder to watch and harder to break away from with each passing minute.” – Writer Jeremy O. Harris (Slave Play, Zola)
“Incomparably fresh. One of the most thought-provoking movies about parenting released in recent memory. Batchelor’s aura is electrifying.” – Jonathan Christian, THE PLAYLIST
“In the superb The Surrogate, Jasmine Batchelor seems to be creating emotions no one’s ever felt before. It made me think of the films of Ira Sachs, Sidney Lumet, and Bogdanovich in Last Picture Showmode.”- Jose Solís, AMERICAN THEATRE

Jess Harris (Jasmine Batchelor, “The Good Fight”), a 29 year old web designer for a nonprofit in Brooklyn, is ecstatic to be the surrogate and egg-donor for her best friend Josh (Chris Perfetti, “Looking”) and his husband Aaron (Sullivan Jones, Slave Play). Twelve weeks into the pregnancy, a prenatal test comes back with unexpected results that pose a moral dilemma. As they all consider the best course of action, the relationship between the three friends is put to the test.

Jeremy Hersh is a filmmaker and playwright based in New York. His short film Actresses premiered at Sundance 2015 where Time Out New York named it one of their five favorite shorts of the festival.Actresses went on to screen at SXSW, BAMCinemafest, and The New Orleans Film Festival, where it won the audience award for best narrative short. Jeremy’s undergraduate thesis film Natives premiered at SXSW 2013, and went on to play numerous festivals including BFI Flare in London. Jeremy was a fellow of the 2015 Film Society of Lincoln Center Artist Academy.

I came of age being told that as a queer person, I was entitled to the same rights as straight people, including having biological children if I wanted to. I set out to write a film about a relationship between queer people and their chosen family who are confronted with the same types of difficult questions (ethical and otherwise) that all potential parents have to answer, questions that are becoming increasingly complicated due to recent advances in prenatal testing technology. I don’t have the answers to these questions, or a particular message I set out to convey, but I’m interested in the various points of view and conversations these questions provoke
I make movies partly as a way of investigating my own blind spots, in order to hopefully identify them and learn from them. Like so many among us, the characters in The Surrogate pride themselves on being open-minded progressives who talk openly and freely about everything. The conflict in the film arises when they’re finally confronted with something they don’t know how to talk about. Ultimately, the characters have to confront the gap between ideals and practical realities. 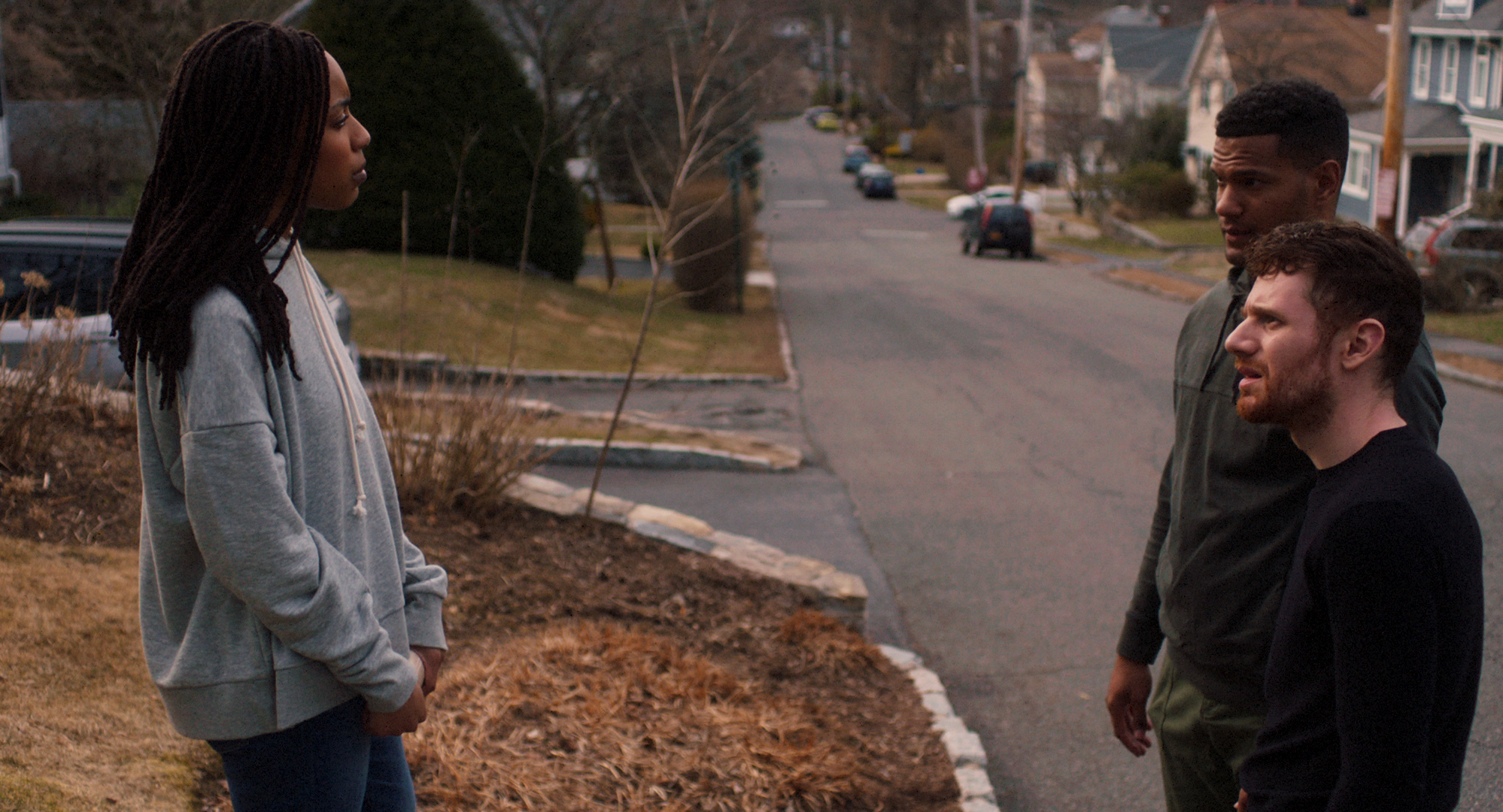 Jeremy Hersh (Writer / Director) is a filmmaker based in New York. His undergraduate thesis film Natives premiered at SXSW in 2013. In 2015, his short Actresses screened at Sundance, SXSW, BamCinemaFest, and The New Orleans Film Festival, where it won the audience award for narrative short. Actresses was included on David Ehrlich’s list of “5 Sundance Shorts That Knocked Us Out” in Time Out New York. The Surrogate is his first feature.
Jasmine Batchelor (“Jess” / Associate Producer) is from Philadelphia, PA and Atlanta, Georgia. After discovering a love for acting in high school, Jasmine went on to study acting at Wright State University and The Juilliard School. Recent television credits include “New Amsterdam,” “NCIS:New Orleans,” “The Good Fight,” “The Affair,” “Law & Order: SVU” and “Miss 2059.” In addition to film and television, Jasmine’s recent theater credits include projects at Manhattan Theatre Club, The Playwrights Realm, The Public Theater, Two River Theater, and Baltimore Center Stage. “Batchelor, whose expressive face recalls the oft-doomed heroines played by Lillian Gish, turns in an Isabella for the ages.”– Jose Solís, New York Times review of MEASURE FOR MEASURE at the Public Theater, December 2019
Chris Perfetti (“Josh”) was last seen starring in Halley Feiffer’s Moscow x6 at MCC Theatre Off-Broadway under the direction of Trip Cullman and will next be seen on the CW series “In The Dark” and Netflix’s “Bonding”. Chris will also be seen supporting roles in the features The Virtuoso opposite Anson Mount and Anthony Hopkins and Minyan with Ron Rifkin. On television, Perfetti most recently recurred on the FX series “What We Do in the Shadows.” He was a series regular on the NBC series “Crossbones” with John Malkovich and on Stephen Falk’s “Next Caller.” He’s had memorable recurring arcs on HBO’s “The Night Of” and “Looking,” “Gotham” and “Bull”. Stage credits include The Low Road at the Public Theater; the revival of John Guare’s Six Degrees of Separation with Allison Janney; Brandon Jacob-Jenkins’ play Everybody Off-Broadway at the Signature Theater; Roundabout Theater Company’s Broadway production of Picnic under the direction of Sam Gold; The Tempest at the Delacorte Theater for Shakespeare in the Park; The Tutors (Second Stage; Tommy Kail, dir.); Cloud Nine (Atlantic Theater Company; dir. James MacDonald) and his New York debut in Sons of the Prophet (for which he was the recipient of a Theater World Award).
Sullivan Jones (“Aaron”) was a series regular in the Hulu limited series “The Looming Tower” and has made appearances in “Parks and Recreation,” “The Blacklist,” “The Good Fight,” “Blue Bloods,” “House of Cards,” “Wu-Tang: American Saga,” and “The Politician.” This year, Sullivan can be seen in A24’s upcoming horror movie False Positive, starring Ilana Glazer, as well as the Netflix limited series, “Halston,” starring Ewan McGregor. On stage, Sullivan has worked in Off-Broadway and Regional theaters throughout the country, and most recently made his Broadway debut in the critically lauded production of Slave Play at the John Golden Theater. Sullivan studied Theater at Brown University and the UCLA School of Theater. He is a recipient of the Princess Grace Award for Theater.
Brooke Bloom (“Bridget”): Selected film and TV: the Oscar-winning Marriage Story, Minyan (Berlinale 2020), She’s Lost Control (Independent Spirit Award nomination for Best First Feature), “The Sinner,” Amazon’s “Homecoming.” Obie Award for Clare Barron’s You Got Older.
Julie Christeas (Producer) is the founder and CEO of Tandem Pictures, since 2010. Her recent films include, The Surrogate (SXSW 2020) and Black Bear (Sundance 2020) starring Aubrey Plaza, Christopher Abbott and Sarah Gadon. She also executive produced the cult horror favorite The Eyes of My Mother (Sundance 2016/Magnet Releasing), Monogamy (Best NY Narrative, Tribeca Film Festival 2010), the feature doc Dukale’s Dream starring Hugh Jackman, and Ghost Team starring Jon Heder, David Krumholtz, Justin Long, Amy Sedaris and Melonie Diaz. Previously she produced Blood Stripe (Jury Prize for Best Narrative Film, LA Film Festival 2016), Wildlike starring Bruce Greenwood and Brian Geraghty (HIFF), and The Sleepwalker starring Christopher Abbott and Brady Corbet (Sundance 2014/IFC). Julie also produces original short-form content for some of the biggest brands in the world — Amazon, Chase Bank, Ford Motors, Netflix, Cadillac and many more. Before Tandem, Julie was EVP across production and development at Renart Films.
Jonny Blistein (Producer) is the COO and Partner at Tandem Pictures. He produced the films The Surrogate (SXSW 2020), Black Bear (Sundance 2020) starring Aubrey Plaza, Christopher Abbott and Sarah Gadon, both films made under strict green-production standards. Prior to Tandem he worked at Sony and Disney, creating some of the first Snapchat Brand content programs, as well as Instagram and YouTube campaigns for Sprint, P&G, Covergirl, Walmart and more. At Oracle, he helped kick off Marvel Studios’ fan-loyalty program Marvel Insider. His first feature Let Them Chirp Awhile (2006) was distributed by Netflix. He began his career in 2005, marketing indies for Digitas, including Park Chan Wook’s Old Boy, and Noah Baumbach’s The Squid and the Whale.
Tylor Hess (Producer) is a filmmaker and journalist based in Brooklyn. She produced and directed the award-winning ESPN 30 for 30 documentary Mack Wrestles (SXSW 2019), wrote and directed two episodes Vox Media’s Explained (Netflix), and has worked at Part2 Pictures, Alex Gibney’s Jigsaw Productions, The Independent Filmmaker Project (IFP), and Scott Rudin Productions. Taylor is a graduate from New York University’s Tisch School of the Arts and the Columbia University Graduate School of Journalism.
Mia Cioffi Henry (Cinematographer) shot two projects premiering at SXSW 2020: Jeremy Hersh’s feature The Surrogate and Kati Skelton’s Adult Swim pilot “Lusty Crest.” Shorts include Moving(New York Film Festival 2019), Cheer Up Baby (Sundance 2018), and Superior (Sundance & Berlinale 2015). Henry has recently teamed up with longtime collaborator, director Erin Vassilopoulous, to adaptSuperior into a feature length film, which is now in post. Head of 1st Year Studies for Graduate Film and Television at New York University’s Tisch School of the Assistant Arts Professor of Cinematography and Arts.