Home NewsEntertainment The (Other) iTunes $0.99 Movie of the Week: ‘Summer of 84’
EntertainmentFeaturedTV and Movies 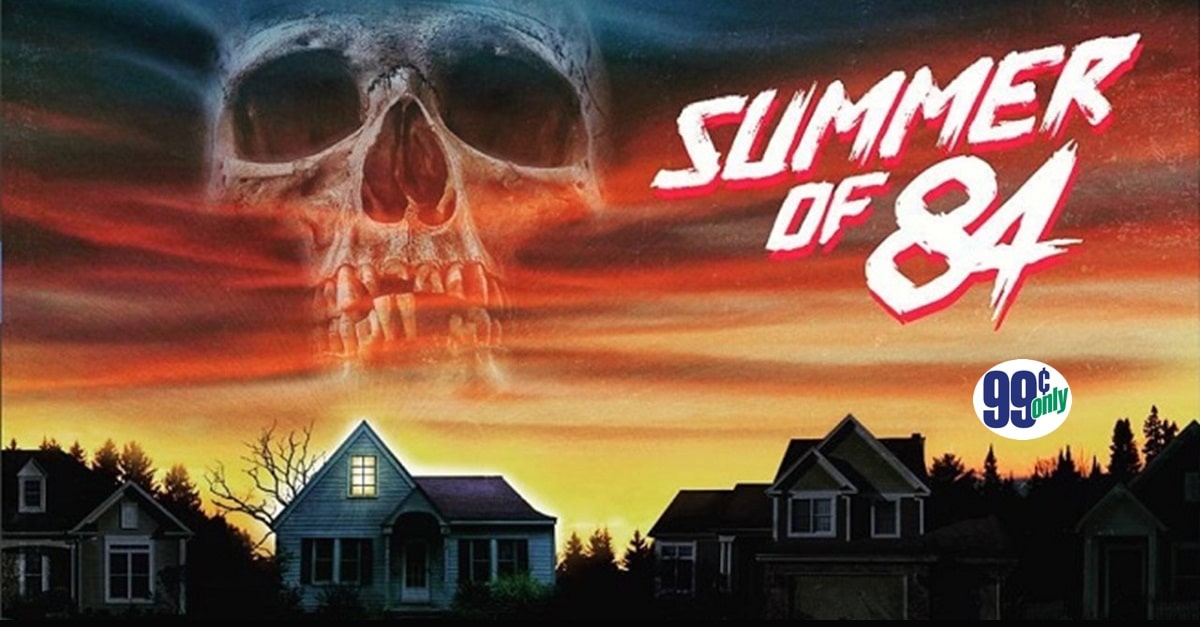 Ok, the featured $0.99 movie this week is a little comedy by the name of Holmes & Watson. Yes, that’s the movie where Will Ferrell and John C. Reilly play the famed detective/sidekick duo up for cheap laughs. I’m sure it’s a fine addition to the comedic oeuvre of Ferrell and Reilly plays, but I’ve never found this particular comedic pairing at all intriguing, or even funny for that matter – and please save your whole, “but Step Brothers is hilarious,” argument, ’cause I have actually seen that movie twice, and I’m just not buying it. Anyway, feel free to drop a dollar on Holmes & Watson if that’s your bag. As for my dollar, well, I can always something of interest in the “Movies You Might’ve Missed” section of iTunes, and this week offered a chance to check in with one of 2018’s overlooked horror gems. So …

This week, a group of wily suburban teens in a quiet neighborhood begin to suspect their neighbor might be a serial killer in Summer of 84.

The Suburbs Is Where All the Craziest Shit Happens

Davey, Eats, Woody, and Curtis are generally content to live out the summer of 1984 mowing lawns, talking about girls, watching scary movies, and running amok through the streets of their seemingly quiet neighborhood. But when their atypical suburban summer is being infringed upon by a rash of kidnappings in the area, Davey begins to suspect someone from the neighborhood might be responsible for the missing children. Before long, he and his pals set out to expose the possible murderer amongst them … but can they do so without exposing themselves to the killer’s wrath? Find out in the haunting, ’80s set who-done-it, Summer of 84. 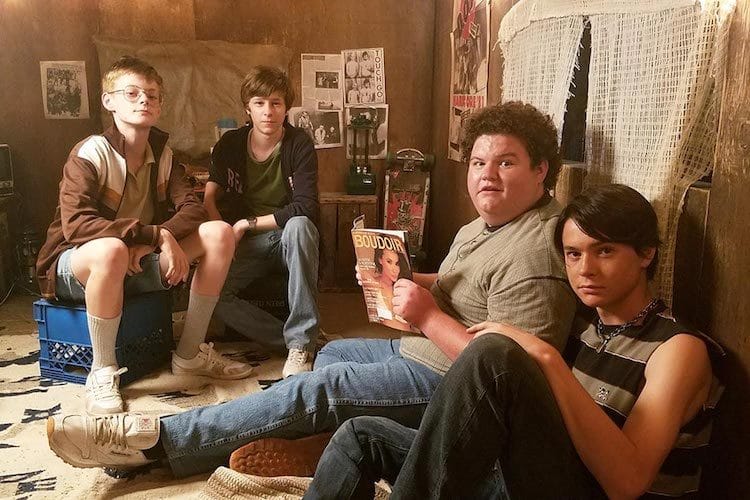 Even Serial Killers Live Next Door to Somebody

Just based on that short synopsis, you might be thinking that the general vibe of Summer of 84 sports a Stranger Things sort of vibe. Just for the record, if you weren’t thinking that, you probably should have been, because there’s little doubt that this atmospheric little chiller takes a page from the Stranger Things playbook … mostly in that it wears its ’80s influences squarely on its sleeve – i.e. ’80s horror, synth-wave music, tales of whip smart teens on bikes getting in way over their heads with seriously dangerous matters while their oblivious parents sit around talking about Reagan, and of course there’s the obligatory kick ass tree house to boot.

In spite of proudly flying that “1980s influenced” flag with undying pride, Summer of 84 never feels like a simple retread of the works that influenced it. That has a lot to do with the fact that screenwriters Matt Leslie and Stephen J. Smith freshen up the genre tropes that fueled those influences by keeping their own film squarely grounded in reality. That means these kids aren’t battling alien invasions, or Russian operatives, or knife wielding monsters, or ravenous beings from alternate dimensions. Instead, they’re fighting a much truer face of evil – the one that belongs to the quiet, well-liked guy who lives in the house across the street. In doing so, they tap directly into the inherent fears and paranoias that tend to invade even the nicest of suburban neighborhoods, which makes the film – even in its more outlandish flights of fancy – seem all the more plausible.

Summer of 84 directors François Simard, Anouk Whissell, and Yoann-Karl Whissell – aka the maniacs who brought us 2015’s batshit crazy actioner Turbo Kid – take all that well crafted fear, paranoia, and plausibility, and use it a build a near suffocating sense of dread into the film’s narrative. One that infects even the seemingly innocent early moments with an air of impending doom, thus heightening the tragedy of every nasty twist and turn that follows. And yes, Summer of 84 twists enough to leave one’s head spinning by its final unexpected turn. Somehow that triumvirate of directors keeps Summer of 84‘s unwieldy narrative in check, effortlessly pivoting the film’s perpetually shifting moods, and ensuring that Summer of 84‘s pitch-black tone and eerie atmospherics remain front and center. That fluid approach to narrative also guarantees the focus remains on the very real characters trapped within every nightmarish frame.

Make no mistake, while Summer of 84 is all about the doom and gloom moodiness – bolstered by Jean-Philippe Bernier’s atmospheric photography and a lavishly sinister score from synth-wave mavens Le Matos – the film always takes a character first approach to narrative. As such the dramatic/tragic impact of the story hinges mightily on the young cast tasked with bringing those characters to life. It should be noted, however, that the glaring flaw in Leslie’s and Smith’s scripting is that their central characters err on the side of “types.” Luckily, the youngsters cast in those roles (Graham Verchere in particular) breathe a youthful, natural energy into their characters, helping to bolster the emotional core of Summer of 84 while also bringing a refreshing authenticity to the complex tangle of relationships within.

As is the case with most moody horror confections, however, it’s the villain (or potential villain) who can make or break the entire endeavor. Rest assured that Wayne Mackey is a “possibly evil guy” for the ages, and that Rich Sommer makes the most of his moments in Summer of 84, delivering a performance that teeters just enough between “aw shucks” aloofness, and malevolent edginess to make one question just who the real Wayne Mackey (a pitch-perfect “possibly evil guy” name, btw) is. Of course, we wouldn’t dream of spoiling that particular plot point for you. Watching the insanity unfold is what makes Summer of 84 so much fun to watch. Just know that the film never quite goes where you think it will. And know that it’ll probably leave you with an unflinching desire lock your doors tight, and close your blinds tighter for weeks to come. 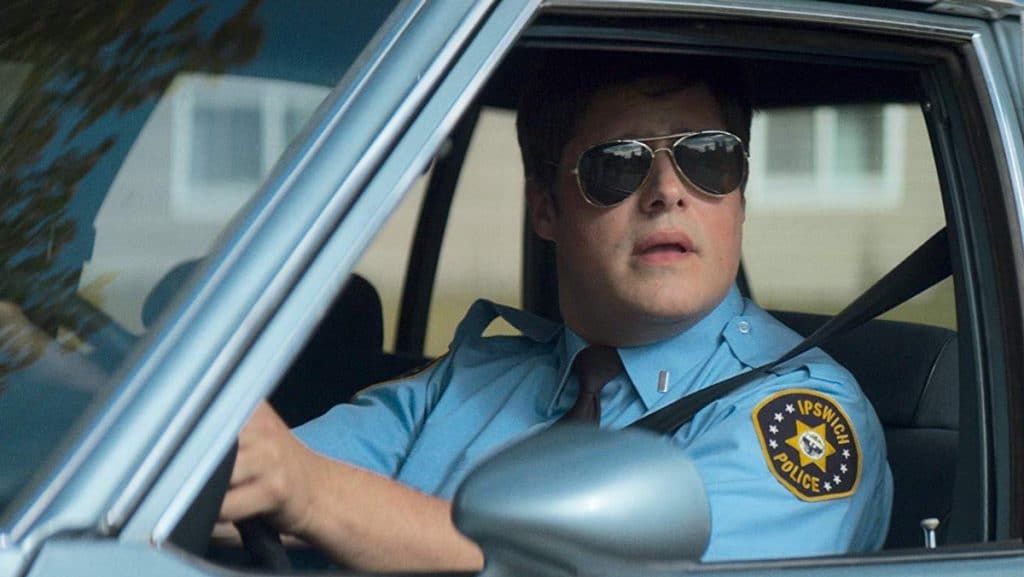 You bet. Though Summer of 84 hardly achieves the rank of high art, it’s really not aspiring to such lofty titles. In fact, the film is quite at home dwelling in the dark shadows of the Amblin-tinged, ’80s-centric horror flicks that inspired it. That Summer of 84 puts a fresh, stylistic, surprisingly grounded spin on such well trod territory sort of makes it a must see for well schooled fans of genre fare. That it also packs a lion’s share of jump scares, belly laughs, and period specific atmosphere into a genuinely unsettling narrative will make it just as fun for neophytes as well.