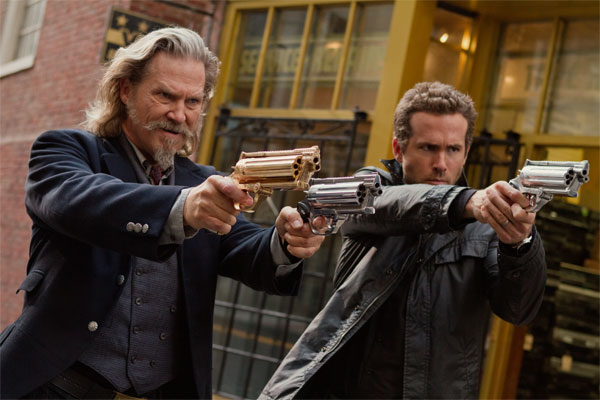 Do you remember when comic book movies were rare? It was a dark-time in the world. I try not to think about it too much. They came out once in a while, but we didn’t have the conveyor belt effect that we are currently enjoying. “The Avengers” and “The Dark Knight” sit atop the pile as the critically acclaimed pinnacles of the DC and Marvel mountains. But what about the other films based on comics and graphic novels, the ones that lack capes and damsels in distress. We see a lot of them too even if mainstream moviegoers don’t realize it. This week we get two simultaneously as “Red 2” and “RIPD” take a crack at the summer box office. But overall is the less popular comic book genre one we should look forward to? The results have been very mixed so far.

Frankly, there are a ton of movies with comic origins. For every success like “Men in Black” there is a flop, like “The League of Extraordinary Gentlemen,” that drags down the genre. This is because the source material is so drastically different from example to example that you can hardly compare them outside of their picture filled pages. In many cases the promotional materials never even reference the comic book roots. You would think that with the success of the superhero genre, studios would want to capitalize by pushing these projects as comic book movies.

Part of the problem comes with the most-acclaimed graphic novels. Titles like “Watchmen” and “V for Vendetta,” both written by Alan Moore, were met with harsh criticism from the fans that made them popular when they became movies. Sure Moore also hated the movies and condemned them, but one would expect comic readers to lead the charge to the theaters for such projects. The problem came from studios and directors taking liberties with the stories. If you want to annoy fans, go ahead and change the ending to one of the most beloved graphic novels in history. That’s exactly what happened with “Watchmen.” The fact that the movie is an achievement in visual filmmaking that cemented director Zack Snyder’s status in Hollywood is a whole different point entirely.

Some titles that have smaller followings reach the silver screen with less controversy and without commoners realizing they have a comic book movie playing in front of them. 2010’s “Losers,” starring comic mainstay Chris Evans, lacked any of the telltale signs of a comic book movie. The same goes for zombie thriller “30 Days of Night” and 2011’s sci-fi/western “Cowboys and Aliens.” As cool as this sub-genre is, I am always slightly cautious when the releases approach because of one title. I watched the low of the low play out in 2010 under the usually proud DC Comics banner. The Josh Brolin led “Jonah Hex” is proof that all titles don’t need to make the big screen transition. Even Brolin, Michael Fassbender and Michael Shannon couldn’t save the movie.

But we can’t judge many because of the faults of a few. So when modest hits like “Red” are given a sequel, comic book fans should see this as a success and an example of how even the titles lower on our shelves have been given a chance at mainstream exposure. As excited as we all are by the direction “X-Men” and “Man of Steel” are moving, let’s give RIPD, Red 2 and the others their fair chance. They need us comic book fans in their corner.