The Moon Man of Britain: An Interview With Comic Artist Steve Penfold 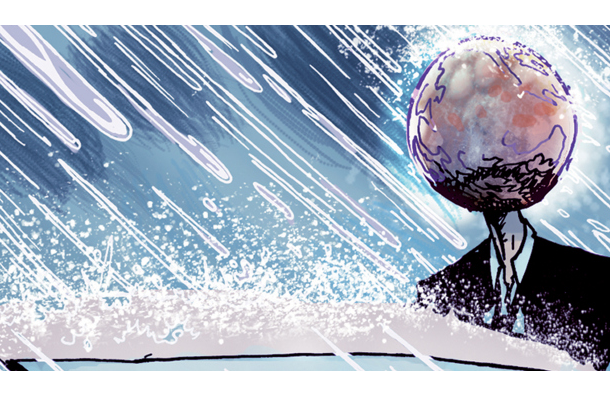 When is a man more than a man? When he’s a man with a moon for a head.

This is the basic premise of Moon, a comedy driven, action packed and astronomically silly comic book by writer Dan Thompson and artist Steve Penfold. The dynamic duo were recently promoting Moon at MCM London Comic Con in the heart of the UK capitol, so I took the opportunity to have a little chat with Steve about Moon and the indie comic scene.

What on Earth is Moon?

I asked myself this very question the very moment I caught eye of Dan and Steve’s table. The allure of a smartly dressed man with a moon for a head was simply too powerful for me to resist. It was naturally the first thing I asked Steve Penfold.

Moon? Basically Moon is–Well basically he drops out the sky in the early hours of the morning, puts on a suit, takes out a gun and fights ridiculous crime.

I’ve read over the first issue of Moon already and I can honestly say that’s all you need to know. Moon is the human embodiment of our own naturally formed satellite. He’s summoned in 12 A.D. into the body of a drunken Celtic druid to defend Britain from whoever and whatever might do her harm. Roughly 2,000 years later and Moon continues to come to Earth after a long night of hanging around in the sky and does what needs to be done to keep Britain safe. 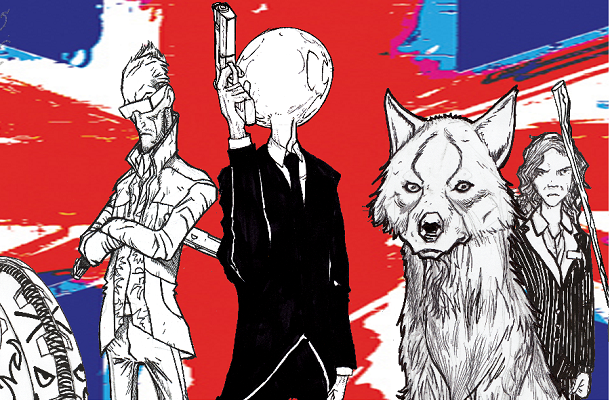 An entertaining, albeit peculiar, idea to say the least. It’s safe to say that it’s not the kind of thing you’d see in more “mainstream” comics, and it’s certainly not what I expected to see when I entered MCM London Comic Con. But many of you may be wondering, just who is Moon written for?

Anyone. The appeal is actually very broad. The writer, Dan, is actually a comedy writer first and foremost, but he likes his stuff to appeal, so he doesn’t nesse–. He doesn’t like to write for any particular genre. So where maybe a lot of indies tend to be either highly sexualised or very violent and this sort of thing, the appeal with this [Moon], we can honestly say it’s a PG [“Parental Guidance”: a British and American movie rating]. There’s moderate violence, because he needs to be able to stop something, and there’s no point if there’s no threat, but yeah, it’s kid friendly, the humour is “Toy Story” stuff.

British Indie Comics: Does an Abundance of Sex and Violence Reduce Accessibility?

Penfold’s comments on the British indie comic scene do highlight the issue of accessibility of non-mainstream comics in general. Many independent comic creators have to think far out of the box if they’re ever to compete with the might of the comic industry encompassing Marvel and DC. Many such indie comics attempt to make their mark by offering graphic depictions of sex and violence. Of course, there’s nothing inherently wrong with that, but it can make it difficult to find something that’s genuinely fun amongst the many adult orientated indie comics out there. 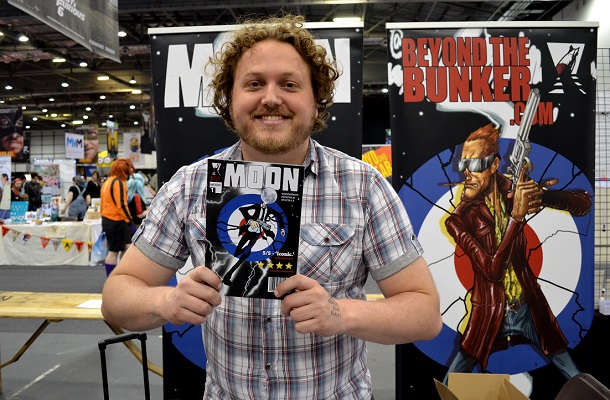 Thompson and Penfold have recognised and embraced this conundrum, which has resulted in the creation of Moon. But what can Moon really offer us that can’t be found elsewhere?

Man with a moon for a head, first and foremost, and he’s on the front page! Basically, it’s a different kind of writing. It’s not self conscience in a lot of ways that maybe some of the other indies might be, we’re not trying to prove anything. All we’re really trying to do–. All we’re really thinking is, are you laughing, and do you think its cool, if you see what I mean. That’s literally the limit. Obviously the story line runs very well, Dan’s an excellent writer, but the basic premise is ‘are people enjoying it?’, and that’s–. It’s just fun.

“All we’re really thinking is, are you laughing, and do you think its cool.”

Thompson and Penfold are currently self-publishing Moon on their own indie comics label Beyond the Bunker. With the help of colourist Ivanna Matilla, Beyond the Bunker have put out two issues of Moon with a third issue in the works. Where can you find out more about Moon? The answer is quite simple.

Er, www.beyondthebunker.com, and that’s us. We should just call it moon.com, because it’s pretty much the only thing we’re releasing on it at the moment, but it’s–. Basically we update that on a weekly, semi-weekly basis. We used to do it, update it, every day, just got exhausting and we ran out of things to say. So there’s already a large, a bucket load of material on there to be able to have a look at. When you actually get there, there’s a lot to look at, but it’s updated, you know, semi-regularly, and we just keep people updated about when and where we’re gonna be.

Thanks to Steve Penfold for taking the time to talk with me at MCM London Comic Con. It was a fun chat and I hope to meet him and Dan Thompson again in the near future. Hopefully Moon will continue to amaze in future issues. Watch this space,

Do you read independently produced comic books? What do you make of Moon? Were you at MCM London Comic Con? We’d love to hear from you so please leave a comment in the section below!