Thor, Iron Man, Spider-Man and the rest of the Avengers are back in Avengers #12, and this time they’re learning to appreciate the hardships of parenthood…? Not only that, but they’re hanging out in a prehistoric jungle inhabited by dinosaurs. As usual, comic book writer Jonathan Hickman has brought the worlds of sci-fi and super-heroes crashing together to create something truly unique. But is it any good? We’ll tell you everything you need to know in Geek Insider’s review of Avengers #12! 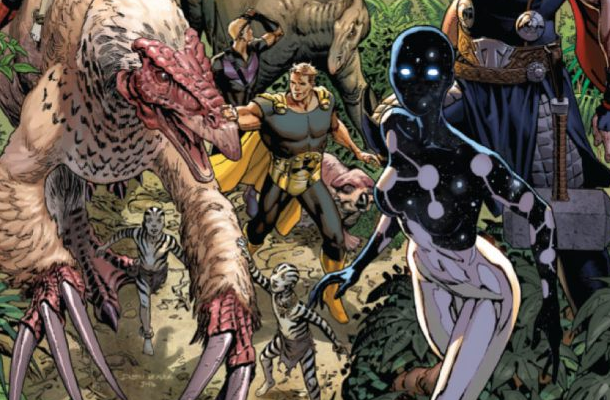 Marvel & the Avengers: The Story So Far

Avengers #12 takes place during the “Marvel NOW!” event that encompass select series in Marvel’s comic lines. In turn, Marvel NOW! takes place after the “Avengers vs. X-Men” event that resulted in the generation of millions of mutants world wide as well as Captain America recruiting more members into the Avengers than ever before. This back story may sound confusing, but you can get yourself up to speed in Geek Insider article “On the Uncanny Avengers ‘M’ Word Debate”.

The new Avengers series, which Avengers #12 is part of, focuses the idea that Earth is simply one small part of a much larger, universal system. In fact, the Avengers discover that the system that allows space and time to function was built eons ago by an ancient race of robotic “Engineers”. Ex Nihlo, an alien being and student of the Engineers, attempts to build the perfect world by first terraforming Mars and then bombarding Earth with his “genesis bombs”.

Ex Nihlo is eventually defeated, but the damage has already been done. Of the many genesis bombs that land on Earth, one lands right in the middle of Regina, Canada (read: Comic Review Avengers #10) and another crashes in The Savage Land.

For those who are new to the Marvel Universe, The Savage Land is an unexplored region of Earth hidden in Antarctica by an alien species that wished to monitor the rate of evolution of Earth’s indigenous species. As such, The Savage Land is populated with the descendants of the dinosaurs as well as humanoids that have evolved convergently from humans. The Avengers have been there to witness the aftermath, but so have terrorist organization A.I.M. You can find out what A.I.M. find so interesting in The Savage Land in our review of Avengers #11. 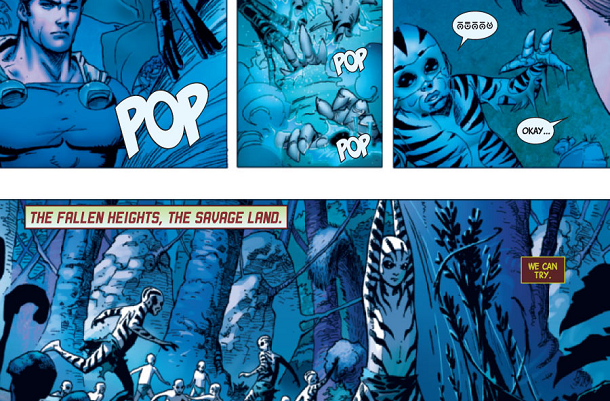 As we mentioned in our review of Marvel’s Infinity, Avengers writer Jonathan Hickman has been working hard to establish the largest, most diverse Marvel Universe ever. His integration of hard-hitting sci-fi themes with Marvel lore is unlike anything comic fans has ever seen, but it’s also the source of Avengers #12‘s greatest shortcoming.

Over the last six weeks I’ve written three separate reviews on three consecutive issues of Avengers. Even so, the actual narrative of the series hasn’t advanced in any significant way. Each issue has contained what are essentially independent events that occur as part of Hickman’s big picture. But we don’t know what the big picture is yet and, quite frankly, Hickman’s trend of giving small teases at the end of each issue can only go on for so long before readers loose interest altogether.

Avengers #12 does not follow on directly from the events of the previous two issues. Instead it opens with a disturbed Thor sending his prayers to his father Odin as he contemplates the dark future he has envisioned. His thoughts are interrupted by Tony Stark’s remote controlled omniversal Iron Man suit (Stark is currently light years away fighting aliens with the Guardians of the Galaxy) who asks Thor to accompany him into their base’s computer room. It turns out that Thor and the gang are currently situated in The Savage Land while Stark remotely monitors the neo-human lifeforms that have emerged from the remains of the genesis bomb.

The Avengers Create Heroes in their Own Image 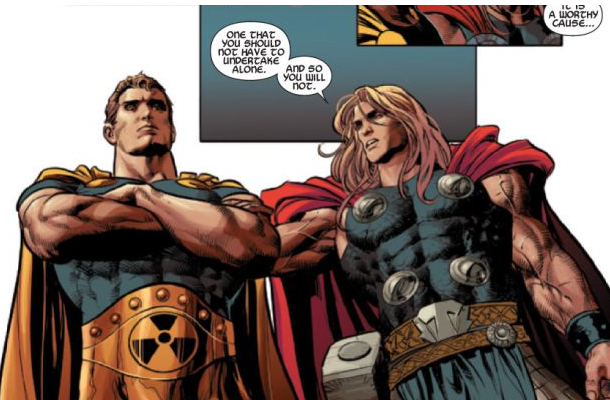 Stark has noticed that the humanoids don’t eat, sleep or breathe and have already reached a pre-pubescent ages after only two weeks. With no needs nor wants, Stark realizes that these evolutionarily advanced humans have the potential to be the next generation of world guardians and therefore decides that he and his team mates must teach these children the virtues of man so that they better understand the plight of humanity once they reach adulthood.

It’s interesting stuff, if not a little peculiar, and allows for some well implemented character development. As the book progresses we get to see Thor put down his hammer and enjoy the company of children, we see new character Hyperion muse on the self-imposed childless-ness of immortal superheroes such as himself and we see the new Spider-Man treat children like they’re morons (Peter Parker is dead and Dr. Octopus has taken the mantle of Spider-Man).

But in what is an emerging theme with Avengers there’s no overarching plot development within the pages of Avengers #12. We learn nothing substantial of the Avengers’ adopted children, the outcome of the genesis bomb strikes in other parts of the world or the fate of Avengers #10‘s Canadian Omega Flight. As it stands, the Avengers don’t even have an enemy to fight. No conflict, no drama. No drama, no story. Avengers #12‘s ending does hint that an enemy is watching, but if the event-shifting nature of previous Avengers issues is maintained, it could be months before the end of Avengers #12  is even addressed.

Avengers #12: Is There Light at the End of the Tunnel?

I’m sure that in the future, once this series is collected as a trade paperback, that I’ll really enjoy Avengers #12. As it stands however, the events that occur in these fortnightly issues are simply too disjointed for me to become emotionally invested in them. The continuous cycle of enjoying an issue, building excitement over the next issue and the conclusion therein, and discovering there’s no conclusion at all is becoming tiresome.

I love Jonathan Hickman’s work on Avengers and I genuinely want to see where his space opera-esque vision takes the Marvel Universe. But unfortunately there’s not enough substance in Avengers #12 for me to recommend it to series veterans or new readers. Fingers crossed Hickman shows us something exceptional in Avengers #13.

Have you read Avengers #12? Do you agree with my review? Will you continue buying into the Avengers series? Let us know your thoughts by leaving a comment below!

The Moon Man of Britain: An Interview With Comic Artist Steve Penfold