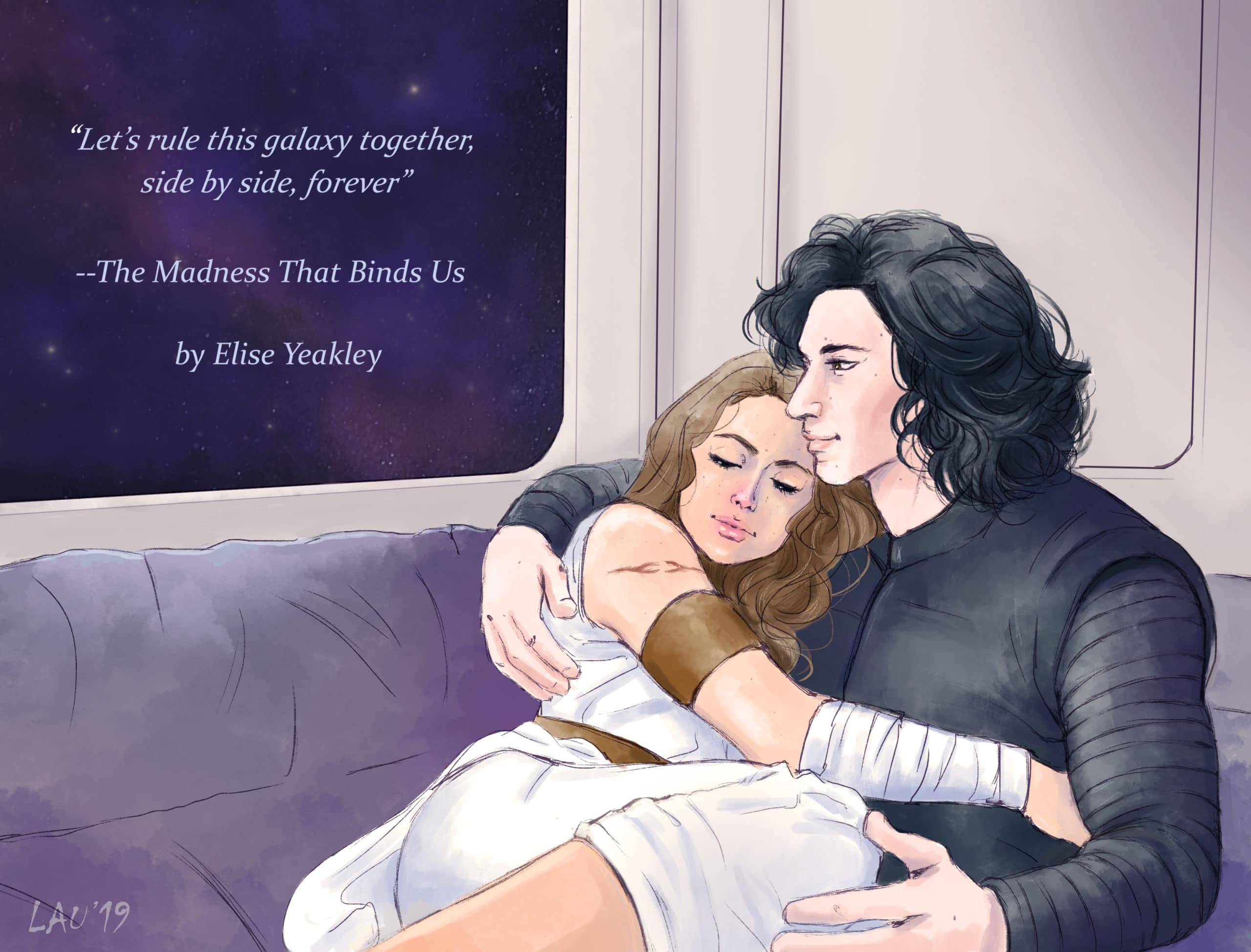 It was tough escaping from Hux. After Ben killed Snoke, it didn’t take long for Hux to storm in and challenge us to fight. “What have you done?!” he asked, his pale face turning purple.

“I did what needed to be done,” Ben said. Hux looked wildly around the room and wiped a hand down the back of his head to his neck, his face contorted in anger. His eyes darted back to Ben and fury burned in his glare. Without taking his eyes away from Ben, Hux pulled out a crimson light saber, let out a scathing roar, and ran towards Ben. I threw a lightsaber to him and he caught it seamlessly.

The two of them danced a twisted dance of blue and red, buzzing and yelling, as one blocked a blow and the other one readied for another attack.

He almost won. After everything we went through to win this thing together and come out alive, I almost lost Ben before my very eyes.

Hux had him in a choke hold with one serpent-like arm wrapped around his neck. He kicked Ben’s legs out from underneath himself and took his lightsaber from him, holding it close to his chest.

My whole world stopped. Froze. Right there in that one moment. I don’t remember how I did it–I don’t even remember moving. All I remember is flashes of what happened next.

My hands met the ground. I remember the coldness on my fingertips.

My legs swept against Hux’s ankles, knocking him over.

Ben takes his lightsaber back and turns around swiftly, his hair moving as he twists like a storm to face Hux.

I’m holding Hux back and Ben is pointing his saber at Hux, disdain and determination evident against the sweat and dirt painted on his face from the exhausting battles that just barely ended a few moments ago.

When I recall the details, I don’t even hear any sound. It’s as if a fog was placed over my ears and mind and all I could hear was white noise and mumbles.

Hux’s hands rose as he surrendered. The rest is a blur of violent running, sharp breaths, sore legs, and Ben and I finding our way into a small ship hidden in a nearly abandoned quadrant on Snoke’s star destroyer. After fighting a few stormtroopers and another guard, we make our way out of the ship and into the depths of the galaxy beyond.

We made it out alive. We escaped. We did it. I can’t believe it.

We won the battle. Now we just have to win the war. We’ll take that as it comes.

Right now, all that matters is that we’re safe and together. We find our way to a corner that isn’t covered in dust. Before letting ourselves catch our breaths, we create a makeshift sofa out of basically anything useful we can find on the tiny ship–two crates pushed together, two blankets, a few pillows, and a metal can likely weighing more than the both of us combined, which we are using to keep the crates from sliding apart.

We flop down on the cushioned surface and melt down onto the pillow nest we built together. Our arms find each other almost immediately, and our bodies refuse to do anything but remain as one. He holds me tightly against him. Both of his arms are linked around me in a protective circle, as if I might disappear at any moment and he is doing everything he can to keep me from floating away.

The worst is behind us because anything we will face in the future, we’ll face together. My arms are wrapped around his chest and his arms are around my whole body–we are huddled in our own little world, flying amidst every star in the blackness outside the open window directly behind us.

“What happens now? What will we do?” I ask, my head tilting up to look at him. His expression is relaxed–more relaxed than I’ve ever seen on his face before–and a smile lights up his face. He looks down at me with softness and powerful adoration. I see the universe in his eyes as he continues to convey every ounce of passion he feels for me, and has ever felt for me, wholly and solely through one feverish stare.

“We will rule this galaxy together,” he says, brushing the hair out of my eyes and then kissing the top of my forehead, “This galaxy. Our galaxy.” His palm cradles my cheek as he looks deep into my eyes. “The one you and I belong in, and you and I alone.” I feel his breath on my skin as he kisses my cheek bone and follows it in a trail of kisses down and up the sides of my face. He pulls back slowly and gazes back at me so fondly and in such awe that for a moment I think I am not human anymore, but a rare artifact–the only gem in the entire universe.

Grinning, I blink away the tears forming in my eyes. My eyelids flutter closed and I lean up to kiss him. His hands find their way to my body instantly as our lips find each other like two strong magnets. He uses one hand to hold me close to him by the small of my back while the other moves hungrily through my fallen hair. I taste him and soak in every feeling existing between us. We kiss the minutes away until time ceases to exist all together.

When our heads are too light to continue, we slowly part our lips and fall together in a syrupy pile on our makeshift haven. He puts his forehead on mine, and I can feel him smile. As if we shared the same mind and consciousness complete, we burst into a frenzy of bubbly laughter, in complete and giddy effervescence. His arms wrap slowly around me and I collapse into his lap. As I sink down into him, my laugh fades, leaving a smile planted brightly on my face. I let my legs fall to the side as I rest my head on his lap. I don’t remember the last time I felt this whole–so perfectly happy. My eyes are closed and my mind begins wandering up into the stars. I don’t think I’ve ever been this happy, I think, and I never want it to end.

“We will rule this galaxy together,” Ben whispers in my ear, “side by side, forever.”

With eyes still closed, I smile and whisper back. “This galaxy is ours.”

Read all chapters of ‘The Madness that Binds Us’ here.
Disclaimer: We do not own any of these characters, events, or places in this story; it is the property of Disney and Lucas Film, as are any images used.