This week, Channing Tatum and Adam Driver try to pull off a perfect heist in Logan Lucky.

You Logans Must Be as Simple Minded as People Say

When Jimmy Logan (Tatum) unexpectedly loses his job, he finds himself unable to front the legal fees needed to keep his ex from moving their daughter to another state. Desperate to make some quick cash, Jimmy enlists the help of his one-armed brother Clyde (Driver) and his fast-driving sister Mellie (Riley Keough) to help him pull off the heist of a lifetime. To make it work, they’ll have to bust their safe-cracking buddy Joe Bang (Daniel Craig) out of jail, get in and out of Charlotte Motor Speedway’s vaults undetected during the biggest NASCAR race of the year, and of course, overcome the Logan family curse in the process. Can they do all that and still get Jimmy to his daughter’s beauty pageant on time? Find out in Steven Soderbergh’s breezy, southern-fried heist comedy, Logan Lucky. 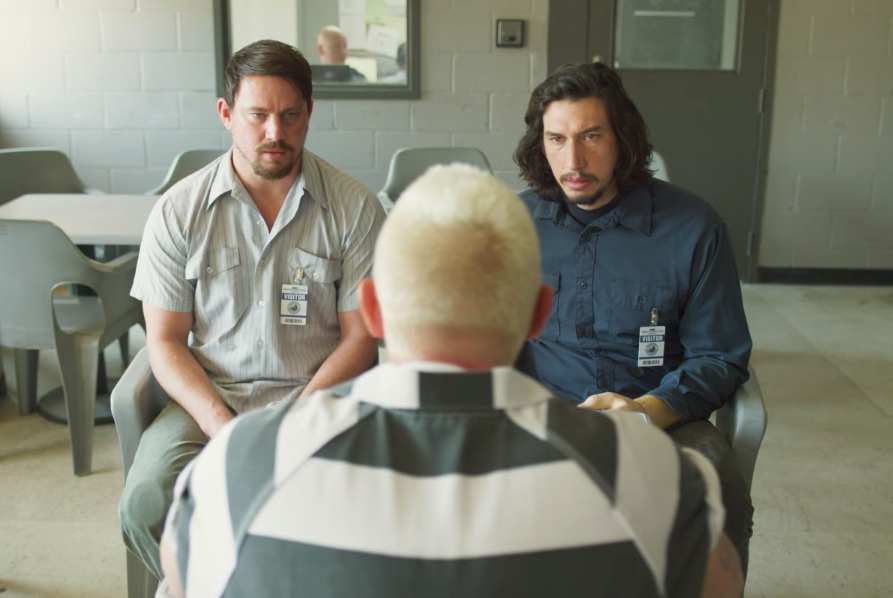 We Are Dealing with Science Here!

If you’re thinking it sounds like there’s a lot going on in Logan Lucky, well, there is. A little bit too much, in fact. But that’s sort of the status quo for most heist flicks. As a genre, heist movies generally err towards stories with multiple characters and intricate narratives with interwoven plot lines designed to both inform and deceive. They also tend to add a little bit of razzle-dazzle in the final act that ties all those narrative threads together … usually with some sort of twist involved. So yeah, there’s often too much going on in Logan Lucky, but that’s just because there’s supposed to be.

It should be noted that with any heist flick, the action either flies or flails in accordance with how skillfully a director pieces all those elements together. Even with so many moving parts in play, Logan Lucky works because Steven Soderbergh makes it work. Behind the devoted work of his leads and a whip-smart screenplay, crackling with sharp dialogue and powder-dry wit (see Game of Thrones joke), Soderbergh allows his film to twist and turn and pivot and press on with balletic grace. If ballets had ever been written about kind-hearted, down on their luck good-ol-boys bent on larceny, that is. Somewhere in the middle of ballet and backwoods bombast, Soderbergh delivers a hilarious heist flick that feels at once fresh and familiar.

Of course, Soderbergh is no stranger to the heist genre. He practically perfected his own “caper comedy” formula by directing three Rat Pack inspired crime flicks in Oceans 11, 12, and 13 respectively. To be honest, Logan Lucky never strays far from that formula … and that’s just fine. Some formulas actually do work, and Soderbergh’s light-handed approach to the formulaic fare leaves ample room for Logan Lucky‘s narrative fits and starts to seamlessly blend with its myriad of one-liners, awkward pauses, and sight gags.

Logan Lucky relies heavily on the charm of its performers executing those lines, pauses, and gags as a result. They do not disappoint. Channing Tatum and Adam Driver make the most of the opportunity, each bringing a humanizing warmth and calculated cool to their respective roles. The pair’s effortless chemistry also builds a crucial authenticity to the film’s central relationship. As good as the co-leads are, it’s Daniel Craig who steals the show in Logan Lucky. Behind a shock of bleach-blonde hair and “prison rules” attitude, the almost unrecognizable Craig brings an impish, imposing energy to his Joe Bang that sways effortlessly between maniacal menace and pixie-like playfulness.

When Craig’s mirthful mug is front and center, the film seems almost unable to contain that energy. It’s a testament to Soderbergh’s skill that Craig never feels like he’s dominating the action. In fact, like the rest of the film’s cast (including Katherine Waterston, Katie Holmes, Sebastian Stan, Dwight Yoakam, Seth MacFarlane, and David Denman), Craig looks like he’s having the time of his life through every giddy, goofy moment of Logan Lucky. If you let that energy wash over you, you might just have the time of your life watching them.

You bet. Look, Logan Lucky is hardly great cinema. Sure, it’s a clever little heist flick, but at 118 minutes, it’s unquestionably too long. It’s also a little bit predictable, which means the film hardly holds up against Steven Soderbergh’s best work (Sex, Lies, and Videotape, Out of Sight, The Limey, Traffic, Haywire). In spite of its shortcomings, Logan Lucky is still a hell of a lot of fun. Sometimes that’s all a movie really needs to be. That it also has heart to spare is just a welcome bonus. So pony up that dollar, sit back, and enjoy the rollicking ride that is Logan Lucky.