This week, an impetuous biologist joins a perilous mission to a quarantined disaster zone where nothing is quite what it seems in Annihilation.

I Don’t Know What It Wants, Or If It Wants

When her husband doesn’t return from a top-secret deployment, Lena (a brilliant biologist with military training) volunteers for a follow-up mission to the mysterious “Shimmer Zone” in hopes of finding out what happened to him. She’s joined on her journey by a psychologist, an anthropologist, a surveyor, and a linguist, all of whom have their own reasons for setting off on the risky assignment. Once inside, the five women find that the “Shimmer Zone” is far more dangerous than they could’ve imagined, and finding their way out may be the least of their worries. So goes Alex Garland’s harrowing sci-fi thriller Annihilation. 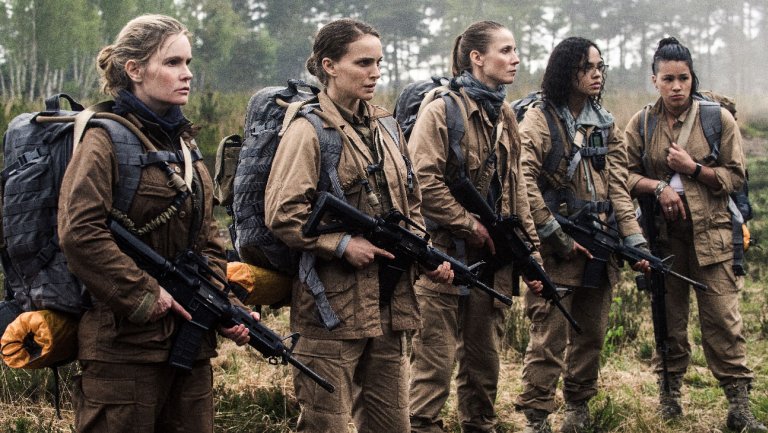 You Said Nothing Comes Back, But Something Has

Hopefully you recognized Alex Garland’s name. If so, you likely rejoiced that the director of 2015’s best film Ex Machina (which remains one of the strongest directorial debuts in modern cinema) was back behind the camera for another heady sci-fi trip. With any luck, you also recognized the title Annihilation as an adaptation of Jeff VanderMeer’s wildly inventive, sci-fi chiller of the same name. If you did recognize those names, your heart probably skipped a beat at the thought of a filmmaker like Garland turning his eye on a story as clever and intricately detailed as VanderMeer’s.

Indeed hearts were skipping way back in 2016 when Garland was announced as the writer/director of Annihilation‘s big screen adaptation. More so when the film went into production with Natalie Portman, Oscar Isaac, and Tessa Thompson in key roles. Then the waiting started. Eventually the film’s release date was pushed, and rumors of extensive, studio mandated reshoots started rolling in. But it was almost a full year after the start of principal photography before we got any real news about the status of Garland’s Annihilation. That news confirmed that the films financier’s at Paramount Pictures (who clearly hadn’t bothered to see Ex Machina or read VanderMeer’s brainy novel) were afraid the film was too intellectual, and wanted to dumb the story down prior to release to make the story more accessible.

Luckily, that didn’t happen. Producer Scott Rudin went to bat for the film, brokered a deal with Netflix to purchase Annihilation unfettered from Paramount, and finally got it into theaters. What audiences got upon the film’s release was one of the smartest, freakiest, most original science fiction films since, well, since Ex Machina.

Of course, fans of VanderMeer’s book were quick to point out that Garland had taken more than a few liberties with the material. Then again, “liberties” may be an understatement. Garland actually copped to reading the book only once and writing his adaptation entirely from memory. While his script keeps the original story’s central narrative in tact and deftly matches its tone, his Annihilation is at times all but unrecognizable from VanderMeer’s. 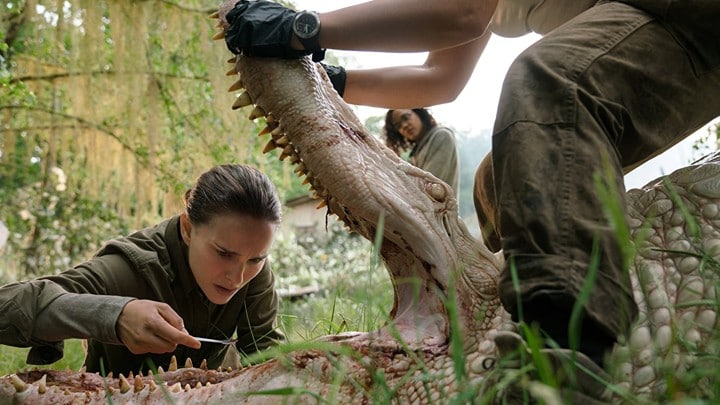 That’s not necessarily a bad thing. Garland’s approach actually meshes pretty well with the original’s unnerving tale of biological “appropriation/mutation.” In other words, two things can sort of be the same while also being different. While all of Garland’s changes may not suit fans of the book (his trilogy-robbing ending and his take on Portman’s Biologist – particularly in her motivations for entering The Shimmer – may rub devotees the wrong way), his take on the treacherous, endlessly imaginative world VanderMeer created often proves just as fruitful. Garland’s willingness to go full on horror movie at key points throughout the film also proves that VanderMeer probably should’ve indulged in the macabre more often in his book (which is at times itself shockingly grotesque).

What’s surprising is how well Garland’s film works even after taking such drastic steps away from VanderMeer’s vividly realized source material. As someone who devoured the entire Southern Reach Trilogy (Annihilation is the first book of said trilogy) in the space of a few days, I was genuinely taken aback at just how different the film was. I was also equally enthralled by what Garland offered up instead. His Annihilation succinctly captures the intellect, the deeply melancholic energy, and the ominous overtones of the source material, but it’s also a gorgeous, ghastly beast of a tale in its own right.

If it seems like I’m being a bit cryptic about details regarding that tale, it’s because I am. Garland’s film plays like a debauched mystery that gets more elusive, more unsettling, and more unsolvable with the discovery of every new clue. To divulge any of those clues (whether you’ve read the book or not) would be to pluck the teeth from the beast’s own mouth. Like the best of mysteries, you deserve a chance to discover Annihilation‘s monstrous language on your own. Even then, you should know that whatever theories you come up with along the way will probably be wrong. Just know that getting lost in the mystery is what makes Annihilation so much fun. And thank your lucky stars that we got to see this film as Garland intended. 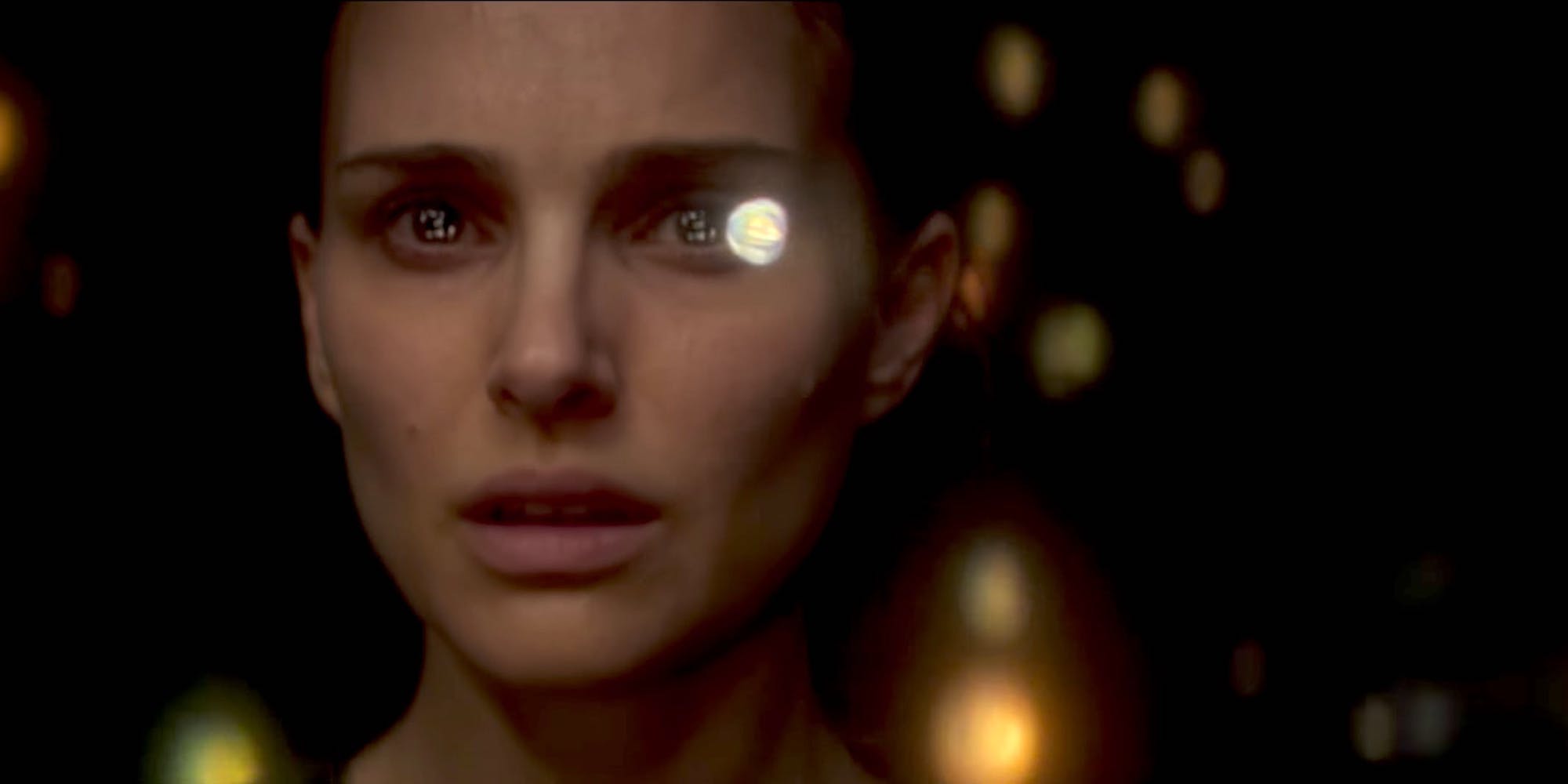 Absolutely. In case I haven’t been crystal clear, let me say that Annihilation is one of the best films of 2018 so far, and it’s not likely to fall off that mantle as we forge headlong into “prestige movie” season. Even if it strays from the equally exhilarating material that inspired it, Annihilation is a bold, intelligent, visually arresting, often horrifying addition to the canon of hard sci-fi cinema. While it’ll surely turn up on Netflix in the future, there’s still no telling when that’ll actually happen. If you can’t wait that long, you really could do a lot worse than spending $0.99 on it this week. Do it.

The Technology That Will Grow Any Graduate’s Web Design Business