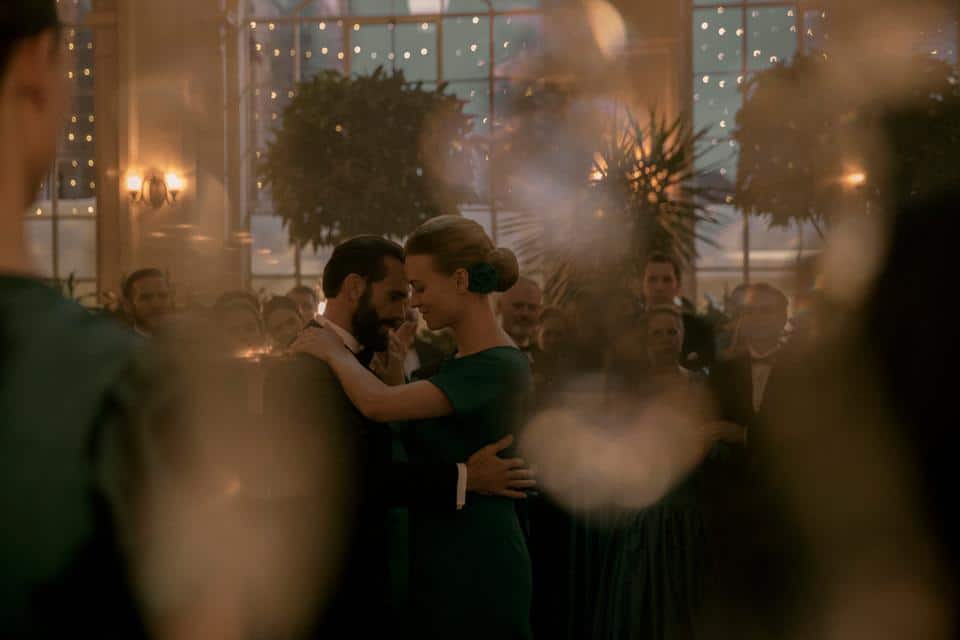 Gilead is a tough place to be a woman. And I know—that’s a statement even Captain Obvious would roll his eyes at. But what The Handmaid’s Tale really wants us to understand is that, while life is difficult for anyone in Gilead whose only real crime is having the audacity to be born female, some women deserve our sympathy more than others. And maybe some really don’t deserve it at all.

“Under His Eye” features four distinct groups of women who are dealing with Gilead’s atrocities in very different ways. I use the term “dealing with” deliberately because even the women who are abusing what little power they have left are victims of a patriarchal system that relegates them to less-than-equal status in terms of their male counterparts, so there’s a sense in which they’re all just trying to survive. But that doesn’t justify hurting others just because you’re being mistreated yourself. So it’s fair to say that some of these women are “dealing with” their circumstances more admirably than others.

Let’s look first at the women who have apparently just decided to go with the flow and make the best of things. This would include most (maybe almost all) of the commander’s wives. The conversation among the wives at the Commander’s Ball (or whatever it is) makes it pretty clear that most of the wives are enjoying their privileged status and are willing to put up with all the Gilead nonsense if it means they can live in nice houses and have nice things. And if they have to put their brains on a shelf or help their husbands rape the handmaids every month, oh well—small price to pay.

And yes—I’d put Serena Joy in this category. There was a time when I thought she might at least try to make a difference, but now we know that all she wants is a baby, and she’s not going to do anything to jeopardize that. She’s clearly willing to put up with her half-wit husband and go back to playing the nice, submissive wife as long as Nichole comes back to her. Maybe she’ll finally come to her senses when she realizes the idiot she’s married to can’t deliver and she’s sold her soul for nothing, but I’m not holding my breath. Frankly, I’m done with the Waterfords.

Admittedly, there are a couple of wives that have shown flashes of decency. One is Ms. MacKenzie (Hannah’s new “mother”). The other, of course, is Eleanor Lawrence, who does her best to help June see Hannah at her school. Ms. Lawrence appears to be struggling with what the man she loved (and maybe still loves) has done, and there may be more to her story that we’ll find out later. But she seems to have a good heart, and she has compassion for June and her situation. For a commander’s wife, that’s saying a lot.

The second group are what we’ll call the “true believers”—the women who really seem to have bought into the whole Gilead philosophy. And even if those beliefs mean that others get hurt, it’s not done out of spite or ill will—it’s done out of love. At least, that’s what they tell themselves. Aunt Lydia definitely falls into this category, and I would put OfMatthew here as well.

I’m going to assume OfMatthew has bought into the Gilead way of thinking as a defense mechanism simply because I can’t imagine a handmaid who actually believes what’s being done to her is just and righteous. But maybe she does. Either way, even though her actions get the MacKenzie’s Martha killed and Hannah moved out of June’s reach, she honestly believes she’s done June a kindness. How twisted is that?

Then there are the women left in Gilead who are still fighting. There’s June, of course, but there are a lot of other handmaids and Marthas who are willing to risk their lives to help themselves and others escape (or at least make life a little more bearable). And they do what they can, but they still need allies in positions of power (or at least those who can influence the powerful). Serena was supposed to be one of those, but that ship has sailed. Maybe Eleanor Lawrence will be able to help at some point?

Finally, we see two women who have physically escaped the horrors of Gilead, but they’re still feeling its effects. I’m glad Emily and Moira have found each other—they have so much in common, and they both need a friend right now (Emily especially) as they transition back into life on the outside. But they both realize that the fight continues, and they’re doing what they can to try and make things better for those still trapped on the other side.

But the ones who haven’t been there don’t quite understand. They want to, but they just can’t wrap their heads around it. I think Syl really means it when she says she doesn’t care what Emily did in Gilead, but how are you supposed to react when you learn that your spouse is capable of multiple murders? Even though you know it was justified (at least on some level), it’s still hard to comprehend.

But Moira’s been there. She gets it because she’s done some of the same things. But that was another time, in another place, and life goes on. I hope Syl really can deal with Emily’s time in Gilead and that they’re able to resume their life. But if they can’t, maybe Emily and Moira will start a new one?