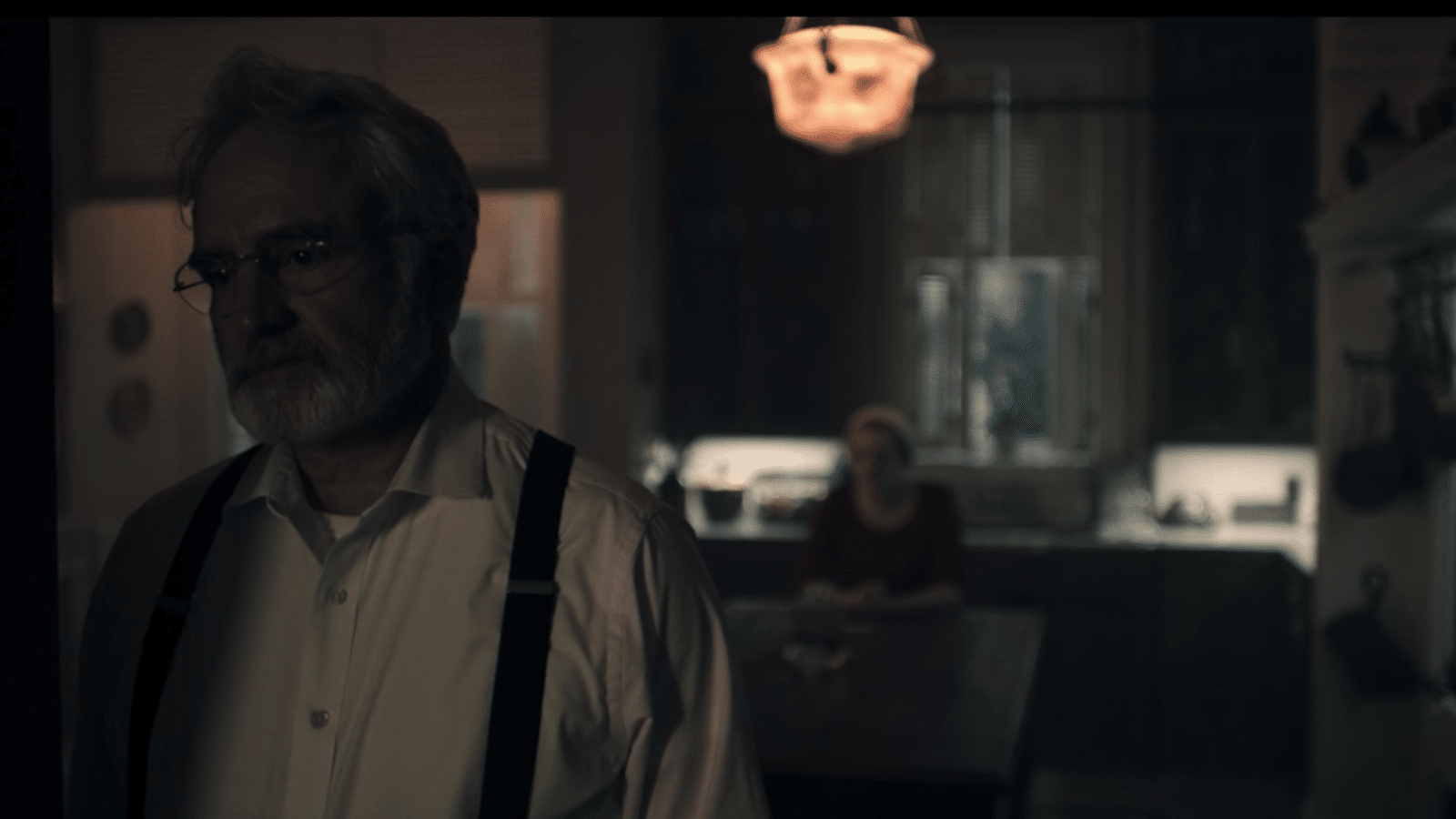 A few weeks ago, we took a close look at Commander Lawrence and decided he’s truly an awful human being. And, on some level, we stand by that. He’s the architect of some of Gilead’s worst policies, which means he’s indirectly responsible for the death and/or pain of hundreds—maybe even thousands—of innocent lives. Even his own wife says he’s a war criminal who would deserve whatever punishment Canada chose to give him if he tried to cross the border. And she may be the only one left who still has any love at all for him.

But “Bear Witness” shows us a different side of Lawrence, and while it doesn’t totally redeem him, it at least lets us know he still has a conscience buried somewhere deep inside. And it takes coming face-to-face with the consequences of his decisions to make him realize what kind of world he’s created and the horror that he’s unleashed.

We’ve always assumed that Lawrence doesn’t force his handmaids to participate in “the ceremony” because, while he definitely sees the need for repopulation (that’s presumably why he helped create this dystopian hellscape), he doesn’t personally feel compelled to go along with it. And he also knows that Mrs. Lawrence isn’t up to the task of motherhood (which we could argue is his fault as well, but that’s beside the point). Plus, since he sees himself as intellectually superior to the other commanders (which is probably true; based on what we’ve seen so far from Waterford and Winslow, that bar’s been set pretty low), he probably thinks he’s above getting his hands (or any other body parts) dirty with the details of procreation. But it’s okay to make other commanders forcibly rape their handmaids, because that’s good for Gilead.

But now Waterford and Winslow see the need to put Lawrence in his place, and so they force Lawrence’s hand and make him attempt to impregnate June, going so far as to bring in a doctor to confirm the intercourse afterward. It’s one of the most moving scenes of the season—not because of the trauma of the assault itself (thankfully we don’t have to see it), but because we see a man who finally realizes the damage his policies have done, and are doing, to real people. To use a biblical reference he can appreciate, he’s finally reaping a little bit of what he’s sown. And it’s not pretty.

I’m not really sure he’s all that broken up about what he’s having to do to June (although I’d like to think that’s at least a minor factor in his guilt). But Mrs. Lawrence is absolutely devastated, and that’s what finally pushes him over the edge. He may be awful, but he loves his wife enough to know that she can’t take much more of this. Not only can’t she get the medication she needs, but now she’ll be forced to relive that horrible moment every month, and he can’t keep doing that to her. He may not be able to escape, but he can do the right thing for her and help her get out.

But maybe he can do both after all, because June’s plan to get as many children out as possible may be a win-win for everyone. Rescuing the “stolen children of Gilead” may buy him enough goodwill with the Canadians for them to grant him asylum and overlook his crimes (or at least show leniency). And he and Eleanor could escape together, and he could play a huge role in helping the Canadians and their allies bring down Gilead’s government. If he’s truly sorry for his actions and wants to make amends, this would be the perfect way to do it. I’m not 100% convinced he’ll still be in that frame of mind once the scotch and the trauma of the moment wear off, but I hope so.