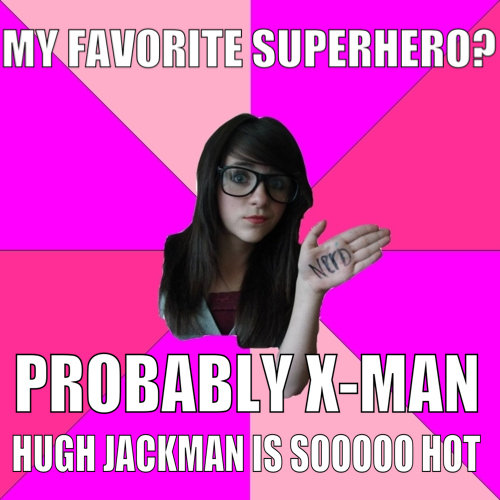 Lately there has been a lot of hullabaloo about Geek Girls. It is such a broad category and the term encompasses a lot of women. Console gamers, bookworms, tech lovers,  Star Wars fanatics and so on. I even wrote an article recently about Gamer Girls and how they get a bad reputation because they are women. A few people who read that particular post found it to be a bit inflammatory, so I am going to take a look at the opposite end of the spectrum here. Perhaps it is not the male population who drag Gamer Girls (and consequently, Geek Girls) down. Maybe…just maybe, its the women who claim to be something they aren’t, for all the wrong reasons.

Fake Geek Girls: Is the Female Kind to Blame?

You know, I wrote the article about girl-gamer stereotypes this past Friday and it felt good. I got all of my hatred toward stereotypes out of my system and it was empowering. Yes, you get it: I am geek-woman, hear me kill zombies and all that jazz. Then, like a ton of proverbial bricks, this freakishly annoying meme fell in my lap. Taunting me. It said, “Girls like me are why you have problems. Can you really BLAME the men?” Really!? Errgh.

Part of me felt crushed. My point was invalid. Guys assume real, authentic geek-girls are going to act like the meme above because…well…most fake geek girls do. Right? So, what am I to do about this imaginary meme-chick, who exists as the aura of all the fake geek women out there who are trying to get in the good graces of their crush or boyfriend by acting interested in something that they don’t really care about? At this point, I was pretty peeved. It was no longer about getting guys to ‘see the light’ and realize that I might actually like gaming more than I like impressing them. It was suddenly about getting women to respect themselves enough to stop being posers.

So…Is This For Real?

What do you think, fellow geek ladies? Could this be the crux of the issue all along? Is there, somewhere, a girl running around referring to Wolverine as ‘X-Man’ and ruining all of our reputations? Somehow, I don’t think its that simple. Instead of being angry at the fake geek women who are cramping my style, I feel sorry for them.

I think, as a whole, the female geek community needs to be a little more understanding of the women who, while making us look bad, are really just trying to be accepted. Perhaps there is a difference between ‘being a fake’ and being a beginner. Maybe these women really do want to know more about comics, gaming, or Trek. Maybe they just don’t know where to start.

So, if you are a woman who genuinely loves chess or Warcraft, programming or building computers, maybe we should strive to make these women feel accepted, so that they have a chance to know if they really enjoy something or not, instead of being berated for not knowing, or not being one of us.

In the same token, if you are a woman who is thinking about pretending to be something you are not, so that: a friend, a boy, your husband, your ex, or anyone else…will like you more. Stop. Just stop for a moment and ask yourself if it is worth the lie. Consider being yourself, whether that consists of make-up and shopping or hobbits and wookies.