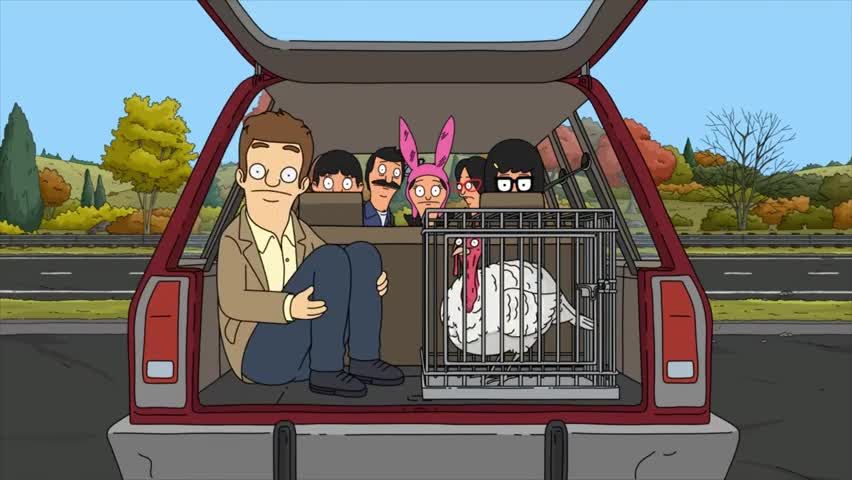 The American tradition of pardoning turkeys at Thanksgiving goes back over 150 years. Granted (as Bob unsuccessfully tries to point out to his kids), it’s a little hypocritical to set one turkey free while planning to eat another one, but it’s a nice gesture. At least for the turkey that gets to live.

But what happens when the powers that be promise a turkey an official pardon, but they secretly plan to have the turkey killed anyway? It’s a cover-up at the highest levels (or, at least, at some level) of government, and only the Belchers can rescue the unfortunate bird and save the day.

To be honest, this was a fun Bob’s Burgers episode (let’s face it—they’re all fun), but it wasn’t one of their best. As much as I love spending time with the Belcher family, the best episodes are the ones where they’re interacting with lots of other characters, especially the other kids at school. Here, we basically just get the Belchers and a few guest stars. And while there were plenty of great lines, there just wasn’t enough going on with the turkey rescue to carry an entire episode.

But it was still enjoyable. Tina, Gene, and Louise have a very strong sense of right and wrong (like most kids), and they know when adults are breaking the rules for their own purposes. So when they overhear Marsha telling someone that Drew P. Neck is about to be killed even after being given clemency, they won’t stand for it, and they decide to save the poor bird themselves. As usual, Linda’s on board with their plan, but Bob would rather not get involved. For one thing, he’s focused on getting fresh cranberries for their own Thanksgiving dinner. Also, he knows that, if he does go along with the turkey rescue, it’s going to go horribly, horribly wrong.

But, of course, he does it anyway, and they eventually save the turkey. But it’s not without its usual share of difficulty, embarrassment, and near-death experiences. In the end, however, Bob is willing to sacrifice his own comfort to make his family happy, because that’s what good husbands and fathers do.

This whole adventure highlights the fact that Bob has very little in common with the rest of his family. He’d be happy just cooking in the restaurant, coming up with new burger recipes and feeding the few customers that come in. On the other hand, Linda and the kids aren’t happy unless they’re involved in some sort of scheme, caper, or cause outside the restaurant, and Bob usually gets dragged into it. But he does it because he loves them and wants to see them happy. And there’s nothing funnier than an exasperated Bob Belcher trying to dig his way out of a hole that his family has thrown him into. This time, at least he finally gets his fresh cranberries.