Runner games are one of the top game genres in the mobile gaming arena. Games like Temple Run, Agent Dash, etc., have proved to be the best time-killer games on Android. All Runner games have the same objective, just keep running and score the highest points. Although, each game offers different unlockable achievements and missions; the core gameplay remains identical. Today, we’re going to review Subway Surfers, another highly addictive runner game on Android.

As I said earlier, all runner games have the same objective and so does Subway Surfers. You are in control of a boy (or any other character that you have unlocked), that’s being chased by a grumpy old policeman and his pretty angry dog. The game takes place at a rail-yard and there are trains coming from left and right. You have to avoid obstacles that include roadblocks, trains, rocks, dead-ends, and much more.

The controls are fairly simple, all you have to do is swipe your fingers to change direction. Swiping left and right will change your characters lane, while swiping up and down would allow him to jump or slide respectively. 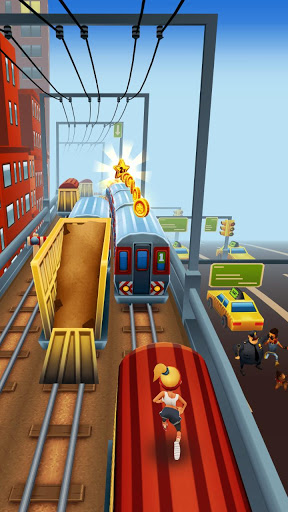 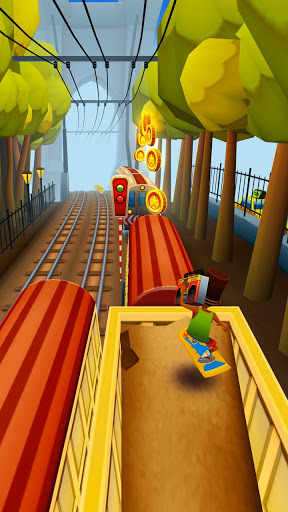 Graphics are pretty decent rendered in 3D. It looks pretty good and sharp. The visuals although not the best aren’t worst either. Graphics will add to your gameplay experience. As for the music, it could’ve been better but still the BGM during the gameplay won’t distract you from the game, although muting it wouldn’t distract you either.

The game offers lots of unlockable achievements to keep you immersed in it and also offers extra content to give you advantage during gameplay. You can buy boosts like headstarts, hoverboards, jumping sneakers, etc with in-game Coins. You can also use real-life money to buy coins and spend them on stuff at the store because accumulating coins could be daunting task. Looks like developers have deliberately made it difficult for people to gather coins, so people use real-life money more. You can also share your scores with your friends on Facebook.

In the end, I would like to say that despite a couple of drawbacks Subway Surfers is a pretty solid game and would give any other runner game a run (no pun intended)  for its money. Best of all, it is available for Free on Google Play, so you don’t have anything to lose except for your time.
Subway Surfers on Google Play

Geeks Anonymous: Recap of the Week