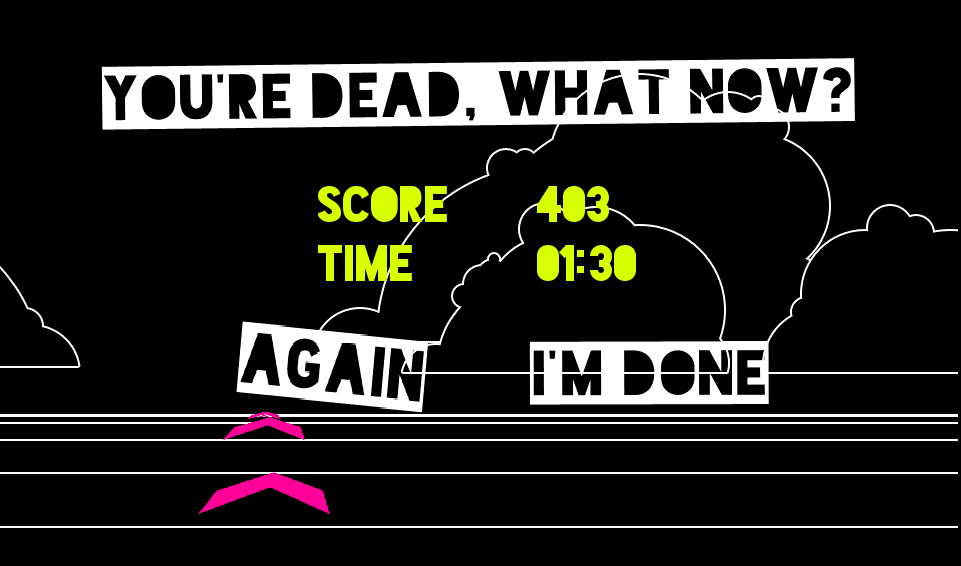 Even stranger than this game’s title is the fact that it has absolutely nothing to do with the premise of the game itself. The controls are simple: tilt to move from side to side, go over ramps to get air, and tap to attack enemies before hitting the ground. As the levels progress, you encounter a wider variety of enemies with different attacks that you must avoid, and making multiple consecutive kills in one jump can earn you some pretty awesome combo power-ups. In many ways, the game is just your standard runner…except that you play as an undead-looking skater chick and battle one-eyed tentacle monsters, dismembered hands, and coffins that open and rain down bombs from above. The color scheme is simple — black and white with accents of neon pink and green — but makes for an eye-catching art style. All of this morbid (and somehow really adorable) chaos unfolds to an electronic soundtrack that is at once both modern and nostalgic. Cool Pizza is available on the Apple app store for free.

The bad news: Waves of enemies are the same every time, making the game predictable after a number of playthroughs. Also, the game does end eventually… or so I’m told.

The best word I can think of to describe this game is “mysterious”. The controls are easy enough to figure out, and it’s easy to get the hang of the game; you know what you need to do… you just can’t figure out why you’re doing it. Like, why does this matter to the overall story of the game? Why is this character shooting little redheaded toddlers with electricity? And what’s with the fruit? Unfortunately, the screens between levels that attempt to narrate some sort of plot make absolutely no sense; for instance, “Oops, she was missing. I’m poor at cooking.” Of course, this is what makes this game one of my favorites. The best guess I have for the story of the game is that your character is trying to save her sister from these really cute enemies. Every few levels, the main character ends up “rescuing” her sister, but she is, without explanation, missing again until the next “rescue” scene. The whole thing is very reminiscent of that whole “your princess is in another castle” bit from classic Super Mario Bros. But if you can accept these weird quirks — and you should, because the game’s fun anyway — Electromaster is available for free on the Apple app store.

Major selling points: Cute art/enemies. Also, what is going on in this game?

The bad news: What is going on in this game?

This one’s for the folks who like something a bit more… mentally stimulating. The object of Nuclien is to either tap the numbers in ascending or descending order depending on the shape (squares and circles, respectively). What at first seems like a fairly simple game escalates rather quickly as the time limits shrink and the game begins to combine squares and circles together, causing you to have to constantly shift your thinking. In my experience, losing at a game with such a simple concept like this can be even more frustrating than losing at something that doesn’t seem as straightforward. This is definitely true for Nuclien. As you progress through the levels, prepare to reach a point where you think, “IT’S JUST COUNTING? WHY CAN’T I DO THIS?” It’s at once extremely frustrating and extremely hilarious. Unlike the other two I mentioned, Nuclien isn’t free. It’s available in the app store for $1.99.

Talking With Machines: An AI Interview