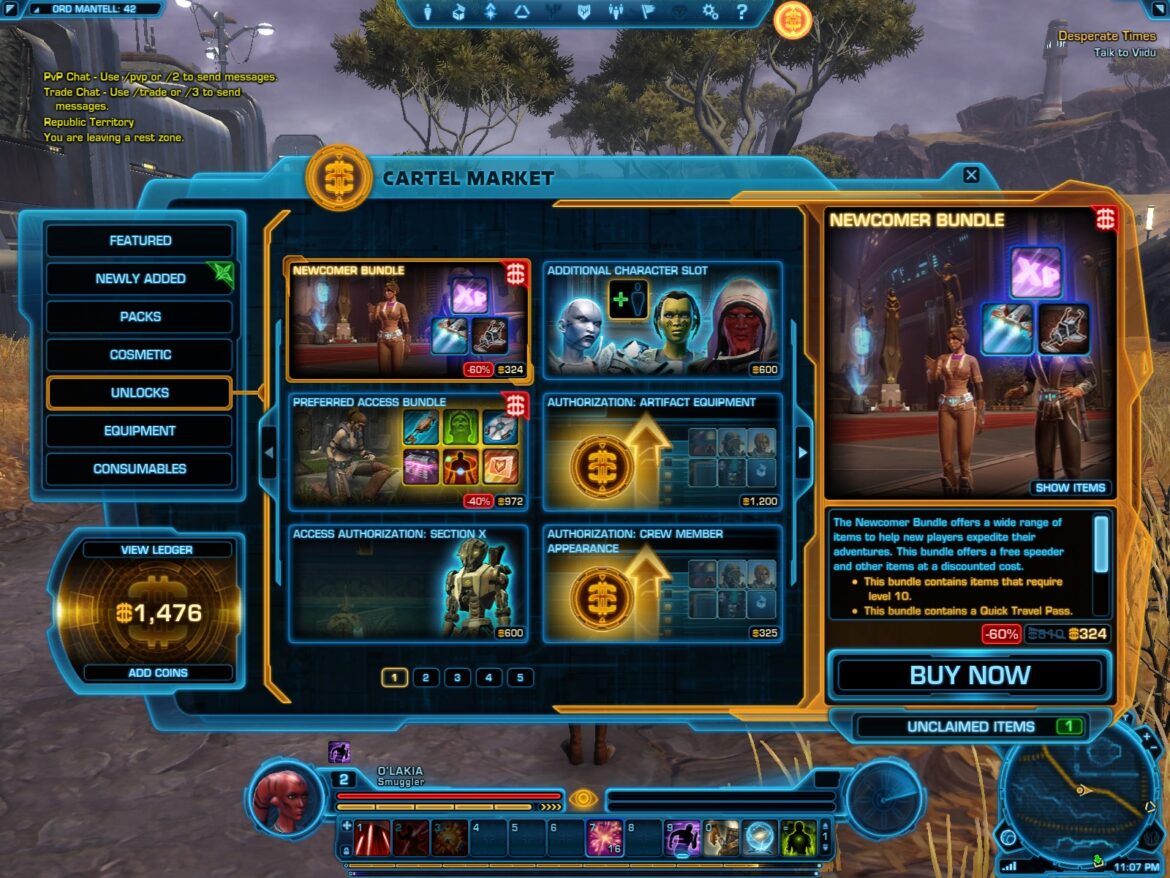 The industry of MMO gaming has changed immensely over the last several years. Due to the flood of massively multiplayer games, it has become harder and harder for any one game to stand out and gain a crowd of it’s own. Eventually the lack of players changed the genre in a major way when companies began making entirely free-to-play games, supporting their efforts only on the items sold for use in a game. When saturation of the genre reached its highest point, many games that previously required a subscription switched to a free-to-play model in an attempt just to survive. Among games that have made that choice, some have managed to fit themselves into a niche just far enough to gain an avid following. Other games have been seen to entirely ruin the game experience in their attempt to make this conversation. One of the most recent massively multiplayer games to switch over to a free-to-play model is Star Wars: The Old Republic. While the game itself remains much the same, Bioware may have made a very large mistake in the way they chose to implement free-to-play design. To check out other game reviews, click here. 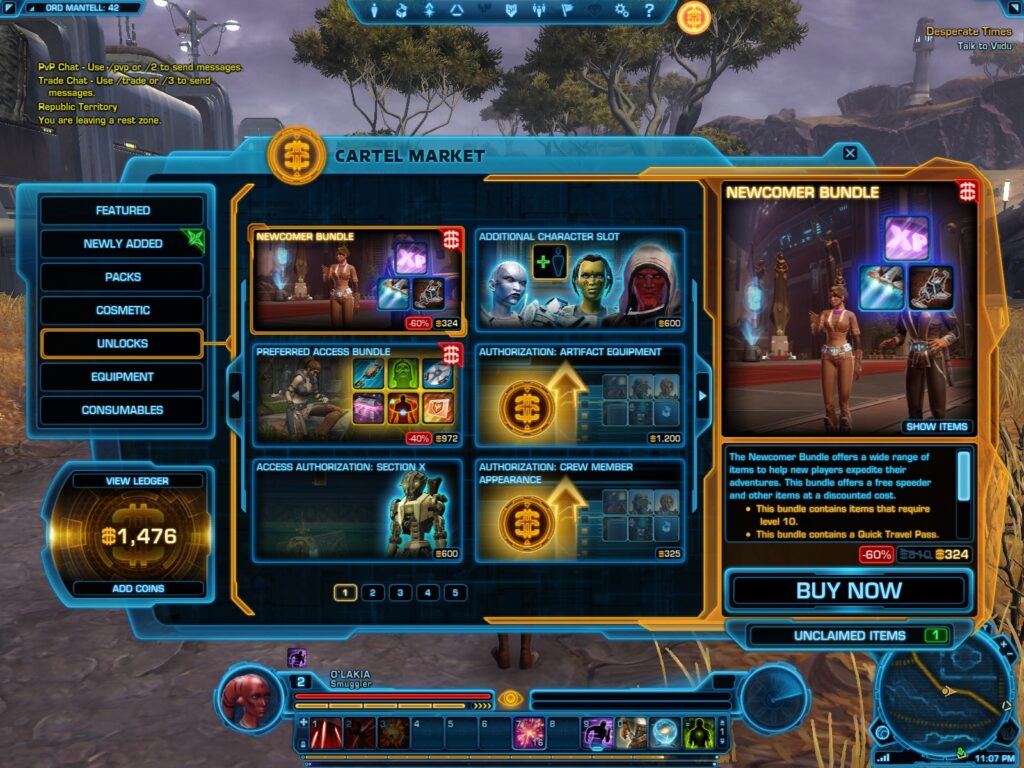 The main page of the Cartel Market.

I’ve made several references to free-to-play design in my previous game reviews here, here, and here, but I haven’t fully explained the issues inherent with attempting this strategy. While making a game pay-to-win is definitely the primary concern, several other factors also affect a players view on the game. Primarily among these is presentation; how much does this game feel like it’s trying to force me to spend money. Next is what can be used without paying any money for the game at all. The games I have been most inclined to spend my money on have been those that I enjoyed a large amount before paying for them. Unfortunately, in the way that Star Wars: The Old Republic designed their free-to-play model, most of these key things have been done entirely wrong.

When I first got back into the game, several things immediately bothered me. The character selection screen now requires a player to activate certain characters they want to use, because this amount is restricted. Being a preferred player(a status given to players who purchased the game and subscribed before it went free-to-play), the number of character slots available to me globally(across all servers) is six, but for the standard free-to-play member this number is a puny two.

In order to fully see how things had changed, I chose to create a new character. Some of the features that must be unlocked, even for preferred players, are certain race choices during character creation. Infuriatingly, even though I chose to spend my racked up points(from prior subscription) to unlock the race I wanted, the game would not allow the purchase during character creation and instead opened up their website. Again, to my dismay, the website also didn’t have a way to unlock this race choice. Eventually, left with no other option, I was forced to log into an already created character and purchase the unlock from the store there.

At this point I was ready to just play the game, after a lengthy patch process from the last time I played until now, considerable time had passed just trying to get in. I got through the opening quest and checked my mail on the way out of town. Being a founder(a player who pre-ordered), I receive a title item and a specially colored weapon crystal in the mail each time I make a new character. After gaining the title of founder, I attempted to equip it on my character and found I had to pay to equip a title that was a gift from the game. Frustrated that I was running into so many changes from the free-to-play model, I decided to look in the store to see what all could be unlocked.

In SWTOR, the cash shop is called the Cartel Market, named for the greedy Hutts. This seems fitting as the cash shop also displays quite an element of greed. If you looked through the feature list I linked earlier, you’ll see how large of a gap there is in the different feature sets. Basic free-to-play players are denied even the privilege of a stash to store their things in, as well as gaining certain features much later in levels, such as sprint, a staple of low-level gameplay. Every gap between player types is filled in by making individual unlocks available in the Cartel Market, such as purchasing a pass to enable running instances more times per week. Unfortunately as a preferred player it isn’t possible to see what you already have assigned to you, which could make it very confusing trying to not waste money unlocking things already unlocked.

Before I completely rip EA and Bioware apart for their poor choices in free-to-play design, let me put some of this in perspective. Most of what I experienced was frustration from having experienced the full game before it was changed into a free-to-play model. Having been a fan of the KOTOR games, I have always considered Star Wars: The Old Republic to be worth the month subscription, and none of the things that made it worth that money have changed. The biggest blunder EA and Bioware made in their choice was to call the game free-to-play; the game acts more like it’s free to try. If you look at the free-to-play aspect as a way of checking out the game, it’s definitely better than any trial you could find out there. For those that intend to play the game for any lengthy amount of time, get ready to either spend a lot in the Cartel Market, or just get a subscription to the game. While the new design of the game has boosted the ambient population greatly(back to almost what it was when the game launched, but there are less servers now), even lower level players will quickly run into something they need to pay for, leading me to believe the population dies off significantly at higher levels. Overall, SWTOR is still worth trying(it is free-to-try), but be ready to spend some money if you want to enjoy the game for all it is.

New Tomb Raider To Be An Xbox Exclusive?