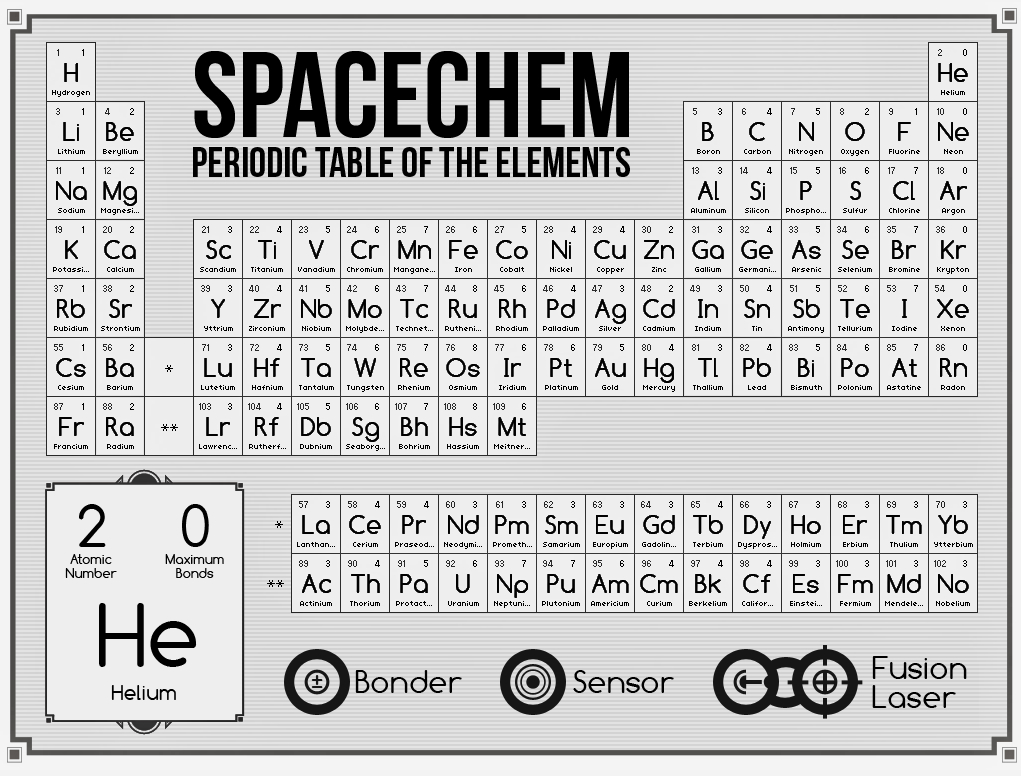 A couple of weeks ago there was a website was kicking off a game giveaway by giving out copies of a puzzle game called “SpaceChem.” I was like, Ok, I’ll bite. I like space. Heck, I even like chemistry. But most of all, I like free.

There turned out to only be one problem.

You see, SpaceChem is not a game.

It’s just lacking in the most important part of being a game, which is, you know, the fun part.

It’s a little bit like those old educational games that elementary schools used to sell. It runs on a computer, it tries to teach you things, and it says “computer game” somewhere in the description. But none of that really changes the fact that they were put together by a group of people who either had no interest in providing an enjoyable experience, or who were simply incapable of understanding what made a computer game enjoyable.

SpaceChem is definitely from the latter category. It feels like a game that was put together by chemistry professors; very smart, well meaning people who have no idea what a computer game is, let alone what makes a computer game fun.

Anyway, SpaceChem is all about moving atoms around and making molecules. Simple, right?

The tutorial doesn’t really help, either.

The game tries to start out simple. Move these atoms over there. It takes you by the hand and leads you through the process. This is a Waldo. It picks up, moves, and drops atoms. You put rails down to tell the Waldos where to go. You can put commands on the rails at certain points to tell them what to do. These are reactors. They make bonds between atoms to make molecules.

To be fair, I might have enjoyed the game more had I been able to ease into it more gradually, but that’s pretty much all the help that the game gives you before it tosses you to the sharks. I had to look up a walkthrough on level 6, which is still technically part of the tutorial.

I know, that sounds horrible, especially for a game review. What’s worse is that this is the kind of game that I want to enjoy, the strange intellectual puzzle game that’s as much a mental exercise as it is a game.

It just ends up making me feel stupid every time I try to play.

That’s not to say that it’s all bad. The music, for example, is absolutely superb; beautiful, sailing classical music that’s somewhat reminiscent of Star Trek. The concept is even solid: a minimalist game about chemistry. The execution is simply too overwhelmingly complex.

I can’t give my recommendation on this one, not unless you’re a Vulcan hiding out among us poor, simpleminded humans.

Of course, if you’re a Vulcan you probably have better things to do than play video games.