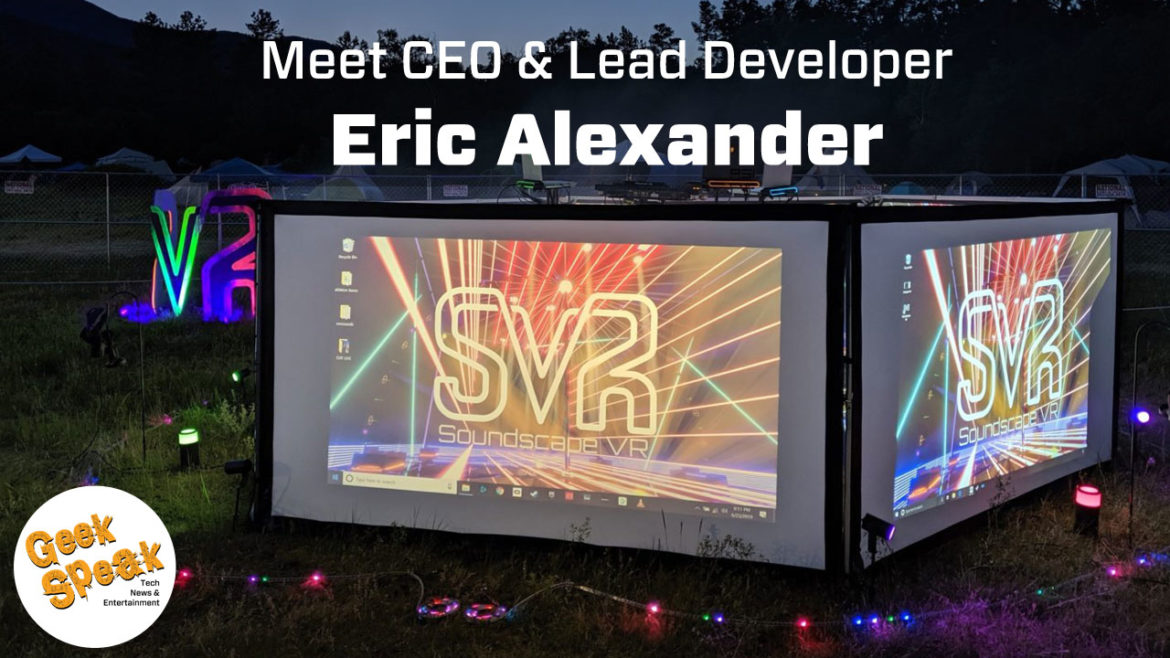 Back in March 2020, Soundscape VR unveiled its newest world which is inspired by the deserts of the southwest: Silica Sol. For those not familiar with Soundscape VR (SVR), CEO and Lead Developer, Eric Alexander, created a virtual reality experience that fully immerses you into the music experience.

Eric has stated that Burning Man was where the Soundscape VR journey began. The best parts of community, technology, art and music came together in a “mind-bending festival experience.” Silica Sol pays homage to that experience.

In the quest to update, upgrade and add new features, Soundscape VR introduced it’s fourth and largest Soundscape to date.

Silica Sol will transport users to a magical world of eternal desert sunsets filled with unique plant life, alien minerals and audio-reactive art. SVR users are invited to shoot, slice, draw, paint, and compete together in various game modes all while in one of four 360-degree world of breathtaking visuals – a bioluminescent forest coming to life at sunset, a crystalline mountaintop bathed in the aurora borealis, the center of the universe deep inside a shifting nebula. Like each SVR world, hidden visual effects throughout challenge users to discover glowing butterflies, crystal spirits and other dreamlike creations.

SVR offers unparalleled live concert capability, mixed reality stages, avatars that can be customized to each individual, a multiplayer and unlimited music choices, new worlds and a full-immersion experience. There’s an option for free play and in-game purchases.

The Soundscape Universe is growing and they’ve teamed up with edmeventz.com to celebrated 50,000 users with a 50K Giveaway for some fantastic prizes which include an Oculus Rift S VR Headset, GeForce RTX 2070 Graphics Cards and $200-worth of in-game currency.

Entry into the giveaway is easy. Simply do some quick tasks and you’re in. Four lucky winners will be drawn on June 21, 2020.

Co-hosts Matthew Harris and Meredith Loughran had the pleasure of spending an hour with Eric to talk about the genesis of Soundscape VR, the Burning Man experience, love of music and creating new things, and so much more.

Don’t have time to watch the interview? Tune in on the podcast!

In addition to being the CEO and lead developer, Eric Alexander is also a scientist, entrepreneur and investor, engineer, producer, and artist. Eric has been a virtual reality visionary since 2013, he founded Groove Science Studios and has been creating VR music venues, fusing his passion for gaming, live music and immersive visual experiences.

Since 2014, Soundscape VR (SVR) has been the leader of VR music technology in every reality. As a groundbreaking music, arts, and gaming VR platform enabling a new generation of live concerts, music experience, and sound visualization; SVR has paved the way for the next technological expansion of the music industry. Friends across the globe can listen, fly, paint, explore, watch, dance, compete, and more – with groups of up to 240 players together in a sonic-visual adventure functioning as a 24/7 music festival. SVR’s Sonic AI allows the software to visualize any genre of music automatically from Electronic to Jazz, letting every user have their ideal audio experience. Engineered by an independent collective of artists, musicians, and developers to be the premier destination for musical and artistic virtual reality content, SVR is regarded as one of the most immersive and technically impressive virtual reality apps in the world. SVR’s reputation extends far beyond just the virtual world, becoming well known for its live music and VR innovation after unveiling “SVR LIVE” – the world’s first mixed reality live music stage – at Burning Man and Suwannee Hulaween in 2018.

With over 40,000 users comprising the Soundscape community, Soundscape VR is featured on the Oculus Home and Steam platforms for free. Soundscape VR is part of the Soundscape Universe, a collection of virtual, mixed, and augmented reality software enabling a new generation of music and art. For more information please connect on Facebook, Instagram or visit https://www.soundscapeuniverse.com