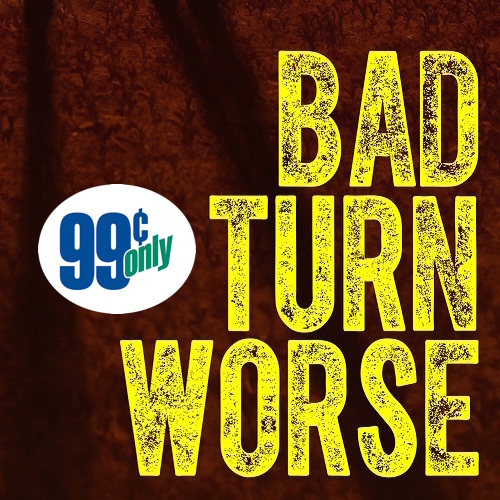 Every Tuesday, the folks at iTunes find a movie they like and make it available to rent for the low, low price of $0.99.  I’m here to tell you whether that film is worth your hard earned dollar.

Sometimes a title can be inadvertently prophetic.  To that point, let’s talk about this weeks film, a little indie thriller by the name of Bad Turn Worse.  I’m sure you can see where this is going.

We meet Sue and Bobby in a What-a-burger in a nameless, dying Texas cotton-mill town as they discuss finer points of biscuit(s) and gravy, their imminent departure for college and the merits of crime writer Jim Thompson who once famously said, “there are 32 ways to tell a story, but only one plot: things are not what they seem.”  It’s a bold statement and is intended to set the tone for the story that follows.  More on Thompson later.

Enter B.J., Sue’s main squeeze and Bobby’s best friend, who is not the college type and will not be leaving town any time soon.  He is, however, flush with a fat roll of cash from a recent, less-than-daring robbery and insists on taking his best girl and best friend on a wild weekend as a proper send off.  When it is revealed that the money was stolen from their cotton-mill boss Giff, and therefore from local gangster Big Red, the three friends are pulled into a plot to make good and then some on the stolen amount.  Lies and double-crosses abound and things are not meant to be what they seem.

Sadly, save for one inspired scene where the 3 friends plot their perfect crime, things really are exactly what the seem in Bad Turn Worse as the script from Dutch Southern (awesome name!) plods along with the most obvious twists and turns.  With 32 ways to tell a story, Southern doesn’t really choose any of them long enough to prove it.  His three central characters are thinly drawn and the actors portraying them bring little to his dialogue and often sound like they are reading the script off of cue-cards.  Their characters go along with every dirty deed with remarkable ease though we are given no reason to believe that they actually can or even would.  This is particularly true with Sue and Bobby who go from intelligent, college-bound kids to double-crossing criminals with almost no prompting or trepidation.

Thankfully, things do get interesting when secondary characters bleed into the story as Southern obviously had more fun writing them.  The always stellar Jon Gries turns up briefly as affable Sherriff Shep.  His hilarious, no BS monologue about “wants and needs” is easily the sharpest moment of Southern’s script.

Mark Pellegrino’s turn as cotton-mill boss Giff is the real star of the movie, though.  Pellegrino has been working steadily in film and tv for almost 2 decades, so you may recognize his face (especially fans of Lost) even if you cannot quite place from where.  Oddly, this is the most fleshed out character in the story and Pellegrino plays him with a level of menacing giddiness that is unnerving.  Giff is a simple man, but we can never really tell what he is thinking even if we can see the gears turning behind those wild eyes.  I just hope that people will stick with the film long enough to see what he accomplishes here.  It’s truly the stuff of “breakout performance.”

Directors/brothers Zeke and Simon Hawkins do their best to make up for the faults in the script with style, and come very close to saving the film.  They bring a laid back approach to the storytelling and make solid use of the lush cinematography from Jeff Bierman who captures the barren Texas landscape and moody rural interiors with a natural feel that is quite compelling.  That Texas dusk has rarely looked so chilly and that morning sun so golden.  Again, it is kind of a shame that their combined efforts are largely wasted on this script.  Take note of Bierman’s name especially as he is one to watch.

Getting back to Jim Thompson for a moment, he’s a fascinating character in literature and film history.  He cut his teeth writing pulpy crime novels in the 30’s and 40’s, then spent time in the 50’s working with Stanley Kubrick on the screenplays for The Killing and Paths of Glory.  In 1955, Thompson published the classic Texas crime thriller, The Killer Inside Me.  That title was turned into a feature film by the brilliant Michael Winterbottom back in 2010.  Available on Netflix and to rent for $3.99 on iTunes, my recommendation is that you skip Bad Turn Worse and watch The Killer Inside Me instead.  It’s the film that the Hawkins Bros. so badly want theirs to be.

March Movie Preview: March Your Way to the Theater