Home Creators CornerComics Why So Serious? The Joker, The Batgirl, and That Pesky Variant
ComicsCultureEntertainmentLady GeekNews

Why So Serious? The Joker, The Batgirl, and That Pesky Variant 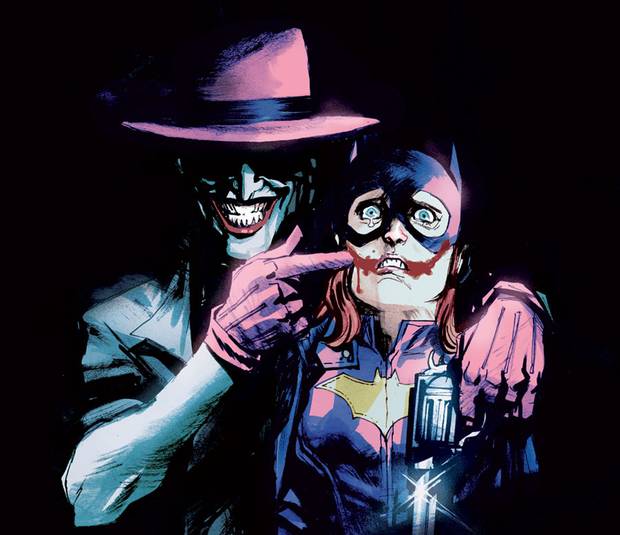 It’s hard to believe, but 2015 marks 75 years since criminal mastermind The Joker was first unleashed on the world. Turns out, he’s still got a few tricks up his sleeve. 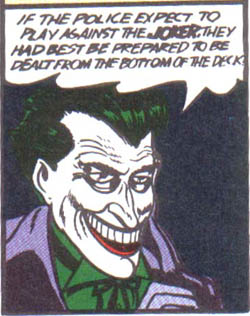 Sprung from the minds of Jerry Robinson, Bill Finger and Bob Kane, Joker first appeared in Batman #1 on April 25, 1940 as a psychotic genius with a deeply sadistic sense of humor. He was Batman’s first legitimate villain, but more than that, he was one of the first ever comic book villains written as a fully formed character. Brash and brutal, smart and exacting, he brought style and grace where there really hadn’t been much before. And he did it all behind that grotesquely permanent grin. As it happens, he was not supposed to survive that first issue.

Through some divine editorial intervention, Kane and Finger were convinced to let The Joker live and in the ensuing decades, the character has indeed become as iconic as Batman himself. The Joker is not just the best of the Batman villains, or the best of the comic book villains, but is widely regarded as one of the most fascinating comic book characters ever created and one of the finest characters in the history of fiction. Period. Shakespeare himself could not have written him any better.

I suppose that Shakespeare line is mostly opinion and as written by a man, me, who has carried a Joker card in his wallet for the better part of 15 years now, may be slightly prejudiced. My point is simply that this an utterly fascinating character that has existed for 3 quarters of a century now, and whose popularity only continues to grow.

Anyway,  75 years of villainy is quite a feat and DC Comics had no intention of letting the unexpected anniversary pass without a little fanfare. To that effect, DC announced that The Joker would receive 25 variant covers this June, sprinkled over numerous characters and books from their extensive catalog and featuring work from some of the best comic artists out there, including the likes of Dave Johnson and Eduardo Risso to name just a few. As expected, some of the work is breathtaking. Here’s a sample: 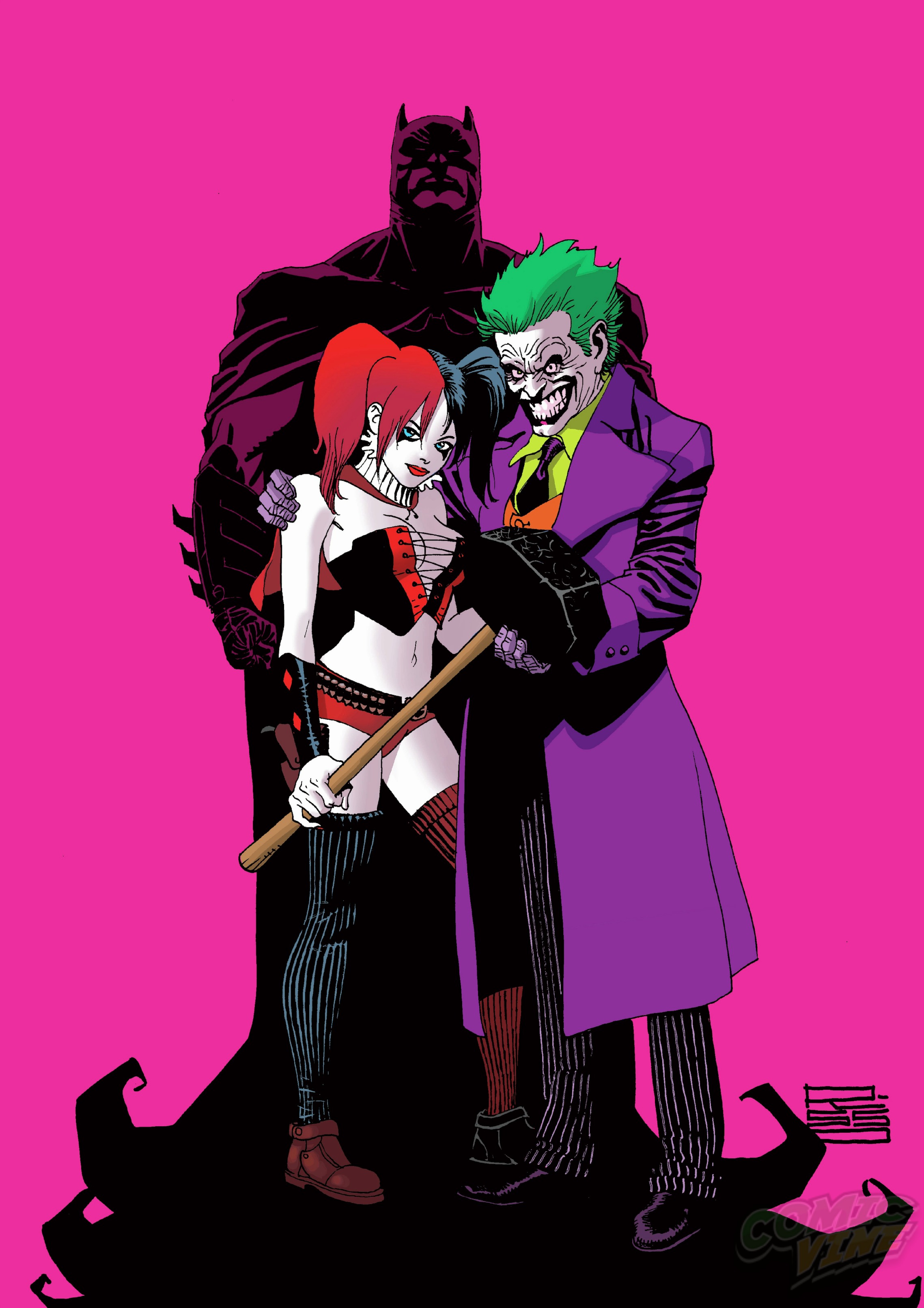 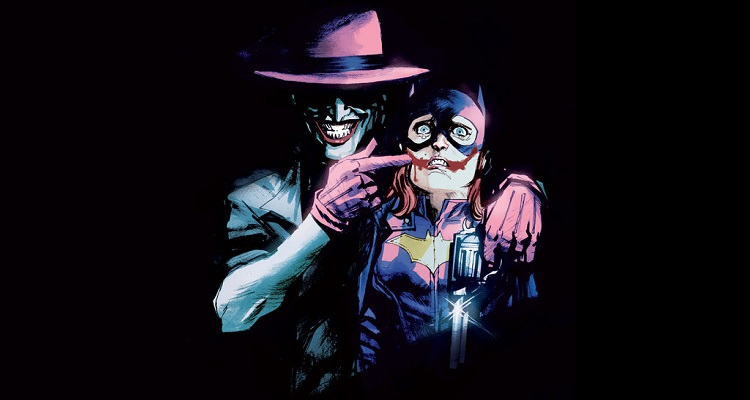 It was almost predestined, I suppose, that this celebration of villainy would not come without a little controversy. Take a long, hard look at that Batgirl cover ‘cause it’s caused quite a stir recently. In fact, that cover for Batgirl #41 may well go down as the most controversial comic book cover in history. Why so serious, you ask?  The answer requires a short history lesson, so grab a pen and take some notes, kids. Ready? Here. We. Go.

Back in 1988, the legendary Alan Moore put his nihilistic stamp on the Batman universe with the release of The Killing Joke. Widely regarded as the greatest of The Joker’s storylines (I would challenge that argument and point you in the direction of Grant Morrison’s Arkham Asylum instead) the story focuses on The Joker’s maniacal attempt to drive Commissioner Gordon insane. Target number one in that effort became Gordon’s daughter, Barbara, who also happens to be Batgirl. In one of The Joker’s most brutal moments, he shows up at Barbara’s apartment and promptly puts a bullet in her spine, leaving the character paralyzed. Not satisfied with hurting her physically, The Joker then strips Barbara of her clothing and proceeds to take a series of graphic photos of her which he then mails to her father, the good Commissioner.

It’s one of the most unsettling moments in the history of the Batman universe and it did raise a bit of controversy at the time as many readers felt the scene also implied Barbara Gordon’s rape. Though Moore has gone on record as stating that this was not his intention, it is difficult to read the scene without that rape implication. Any way you interpret it, the assault is absolutely sexual in nature, devastating emotionally and the moment itself stood firmly as a prime example of just how poorly women, especially female superheroes, were generally treated in comics.

It would be nice to think that an artist as subversive as Moore fully intended this as the moment to change the way we viewed female characters in comics and maybe push them into a more positive realm, but there’s no way to say for sure. Intentional or not, this storyline did end up playing a role in shifting the way women have been portrayed in comics ever since.

In fact, DC themselves led the charge to change the culture, and Barbara Gordon was a key figure in the effort.  Not willing to let their Batgirl fade away into victimhood, they immediately began writing bold new stories for Barbara. Equipped with a slick new wheelchair, she went on to become the genius hacker known as Oracle and continued to have a major role in the Batman universe. They even made her skilled in hand-to-hand combat so she could still pick a fight when needed.

Then in 2011 DC reset their universe with The New 52. In the process they restored Barbara’s physical well being as well as her rightful place as that ass-kicking Batgirl. 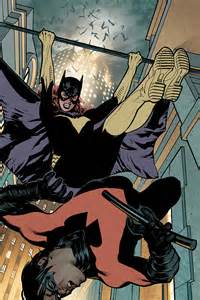 Shaking off the stigma of yet another brutalized woman in comics, Barbara Gordon became the poster-woman for the take-your-life-back survivor and almost single-handedly ushered in a new age for women in comics. She’s also built quite a fan base in the process.

And so, almost 30 years later, artist Rafael Albuquerque has unwittingly sparked an all-out controversy over his cover for Batgirl #41. An obvious nod to The Killing Joke, we see The Joker holding a terrified Barbara against her will as he draws a smile on her face in blood. A single tear escapes her eye as his gun dangles over her shoulder.  Though more than two decades have passed, in this moment she is still a victim.

Indeed, even by Joker standards, it’s an unsettling image. Even more so if you take into account the current state of comic book culture.

The outcry from Batgirl fans was loud and immediate. I can only imagine that the general feeling towards DC is one of betrayal. And in a sense, they are right.

Moving quickly to diffuse the controversy, Albuquerque issued this statement:

“For me, it was just a creepy cover that brought up something from the character’s past that I was able to interpret artistically. But it has become clear, that for others, it touched a very important nerve. I respect these opinions and, despite whether the discussion is right or wrong, no opinion should be discredited.

My intention was never to hurt or upset anyone through my art. For that reason, I have recommended to DC that the variant cover be pulled.”

For their own part, DC has acquiesced to the artists requests. As of this posting, the cover has been pulled from the variant slate and will not be released.

So, what do we make of all this? Some fans say that DC pulling the cover was too reactionary and based solely on the whim of a small but vocal minority. Others are calling it an act of censorship and claim that DC is setting a dangerous precedent. It’s tough to say. Like it or not, DC is running a business and they have no intention of pissing off half of their targeted audience. As far as the censorship argument goes, you can hardly call it that as the artist himself requested the image not be used.

A Serious Medium on Serious Earth

So what, then? It’s just a comic book, right?

Think again. With comic book culture playing a major role in all parts of our society today, everyone, fan or not, seems to have an opinion. Indeed, all over the internet, readers young and old, male and female have been discussing this very topic. While some view the cover as promoting a certain, “once a victim, always a victim” mentality, others see it as an excellent jumping off point to have real conversations about sexual violence and what it means to not remain a victim after you have been victimized. It’s heavy stuff, but comic book land is no stranger to the heavy.

Of course, context is important and what you know about this moment in The Joker/Batgirl canon will directly affect what you bring to that argument.

Comic book or not, an image of a man taunting his sexual victim is kind of in poor taste. Indeed, in the past 75 years this is the only image of Joker that might actually be dangerous. Even die hard fans like me should be able to see that. I can’t help but wonder why DC would revisit such a specific moment in such a specific way given that they’ve put so much effort into changing comic book culture’s view of it’s female characters. After all, it’s not so much that the image exists, fans have created much more disturbing stuff on their own, it’s that DC was actively promoting it.

It feels like 75 years of The Joker have led us to this point. Over the decades we’ve watched with glee as he has terrorized Gotham and tried to bring society down to his level. Occasionally, we may even have found ourselves rooting for him to succeed. The stakes have always been high with The Clown Prince of Crime, but never more divisive than right now. He’s always known what buttons to push and pushed them with a smile. So take a bow, dear friend and keep pushing those buttons ’cause you have just been taken to a whole new level. I can’t wait to see what the next 75 years will bring. 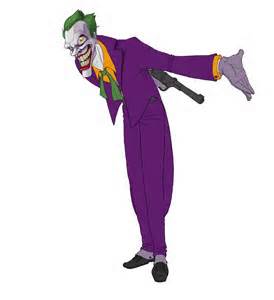 The iTunes 99 Cent Movie Rental of The Week: ‘The Homesman’