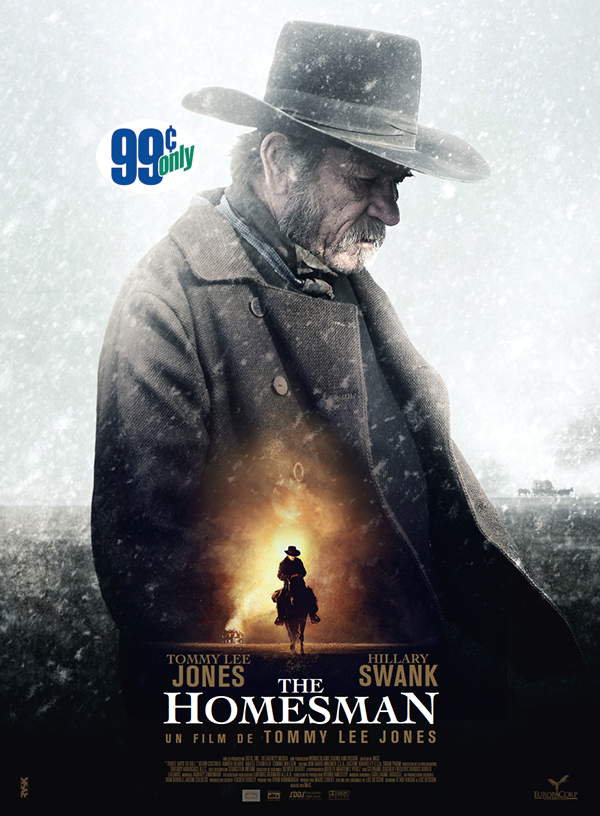 This week finds legendary actor Tommy Lee Jones wearing several hats (writer/producer/director/actor) in the almost-classic, anti-western film The Homesman, though he only wears 2 hats in the actual film.

The Good, The Bad and The Sort-of Ugly

For those of you wondering just how difficult the pioneer days of America could be, The Homesman is more than happy to give you a proper lesson in that brutal slice of history. Devastating winters, deadly illness and long days of back-breaking work proved enough to undo even the strongest men and women of the era. For some, the times were enough to drive you completely, bat-s**t insane, and that’s just where The Homesman picks up its story. Three women in the burgeoning Nebraska Territory paradise of Loup City have found themselves on the far side of sanity and need to be taken to Iowa where they can receive the necessary care. Their long-suffering and/or terribly cruel husbands are not men enough to make the journey.

In steps Mary Bee Cuddy (the uber-talented Hilary Swank), a no-nonsense, plain-jane on the verge of becoming an old maid who proves herself more man than any in town when she volunteers for the mission. Along the way, she comes across a supremely grizzled claim-jumper in George Briggs (Jones) whom she hires as a gun
and general tough-guy presence to make the journey. The road (but really, there’s hardly a road anywhere in the old west) is long and cold and unforgiving, but true hearts will not be deterred and The Homesman finds an odd balance between heroism and foolishness in this unexpected journey.

“You’re Going To Meet Three Kinds of People Out Here”

The Homesman has a fairly traditional western setup with the strong-willed pioneer woman teaming up with the wiley survivor on a difficult mission, but the film constantly subverts the genre and itself with the simplicity of its storytelling. There is the task, there is the journey, and there are the obstacles. For the record, you do not want to meet any of the three kinds of people in The Homesman, but there are bigger problems and greater obstacles in the flatlands of Nebraska.

The country itself is the true villain of The Homesman and a focus on this deadly terrain is where the film sets itself apart from more traditional western films. Less concerned with the human element, Jones turns cinematographer Rodrigo Prieto’s drifting camera towards the enigmatically beautiful landscape of the American west, and lets you see just how unforgiving that landscape can be. Pulling a buffalo skin off of a dead man can be the difference between life and death in the cold, dark night. Finding yourself alone and lost in the endlessly repetitive flatlands can be the most dangerous scenario of all.

Those dangers aside, our “heroes” are further taxed with keeping tabs on three lost/mentally-broken souls, and this is where the film doesn’t deliver on its own potential. Flatly (almost soullessly) played by Miranda Otto, Grace Gummer and Sonja Richter, the three tortured women never provide any sense of danger, even when one of them inevitably wanders off and is found by a sketchy drifter. An ensuing fistfight is gloriously gritty and realistic, but you never feel that any of the characters are in danger, or maybe you just don’t care. Though their backstories are haphazardly/confusingly edited into the storyline to add some sense of humanity, you never see enough of who these women are to have any stake in who they’ve become or who they still may be. For that reason, it becomes a bit frustrating that such a good-hearted person as Mary Bee would put so much on the line to help them.

“You Ever Know A Woman By The Name of Mary Bee Cuddy?” 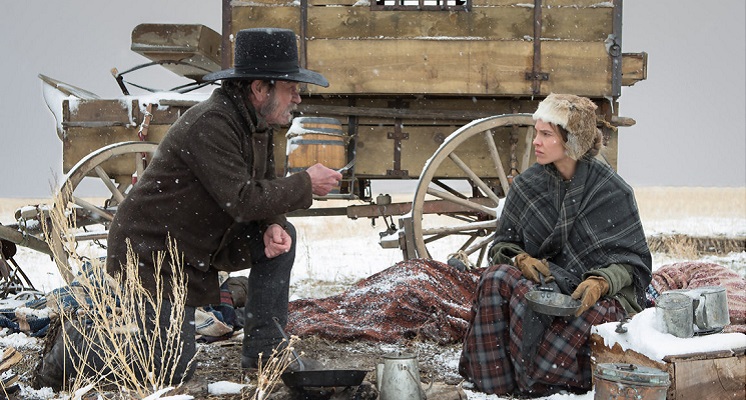 The grand success of The Homesman is in the casting of Hilary Swank as Mary Bee. Swank has proven time and again to be that rare actor who can flat bully you with her mind and her physicality in one moment then completely undress you emotionally in the next. Swank deftly carries both the pride and desperation battling within Mary Bee and matches the stubborn intensity of Jones’ worn-down hired hand. Jones’ Briggs is the polar opposite of Mary Bee. He owes a debt and intends to pay it by seeing their journey through. He doesn’t care if it’s the right thing to do, just that he agreed to do it. Jones’ performance is quite humbling in its silence. An actor who can tell a story without saying a word, Jones wisely wrote himself very little dialogue in The Homesman, choosing to let his weary eyes and weathered face tell as much of Briggs’ story as we needed.

Tommy Lee Jones has been making movies for a very long time and has worked with just about every actor on the planet. It appears he called in more than a few favors to fill the gritty world of The Homesman with Meryl Streep, John Lithgow, William Fichtner, Barry Corbin, Hailee Steinfeld, Tim Blake Nelson, Jesse Plemons and James Spader all making appearances in supporting roles. Their talents are not wasted on these well-drawn, supporting characters who add just the right amount of light and dark through their limited screen time.

The Homesman is the second film that Tommy Lee Jones has directed, and though he doesn’t quite put all the pieces together as cleanly as he did in 2005’s The Three Burials of Melquiades Estrada, the outcome is mostly satisfying. Quality filmmaking starts with the production crew and Jones had the help of a world-class team to bring his vision for The Homesman to life on the screen. I mentioned Rodrigo Prieto earlier, but I would be remiss no to mention his lush cinematography again. Big sky and open fields clash with small dark places through Prieto’s lens and the feeling of The Homesman is oddly claustrophobic even in its grandiosity. Backed by a score from Marco Beltrami, full of sweeping strings and jangly guitars and an endless string of impeccably tailored costumes from Lahly Poore, The Homesman carries the look and feel of a film you would understand and enjoy even without any dialogue. Maybe I’ll try that on a second screening if I’m feeling brave.

You bet. Though a little uneven and about 10 minutes too long, The Homesman is a strong entry into the storied western genre and well worth that $0.99. Jones has been on a bit of a roll lately in his acting choices, and he pairs The Homesman quite well with his budding Directorial eye. The film he delivers is a bleak and unique western experience, so sit back and watch the fires burn as Jones and his talented cast/crew dance the eternal dance straight into the cold, dark night.