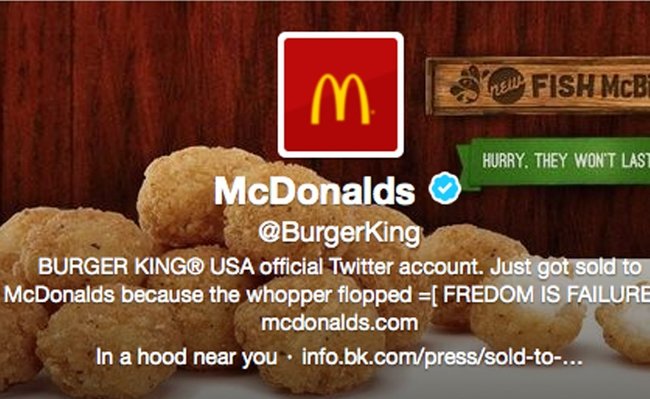 Just last weekend, the unimaginable happened for a couple of well-known American brands when their Twitter accounts were commandeered by hackers. Burger King and Jeep had a nightmare on their hands when false (and some vulgar) tweets began spewing from their accounts.

On Monday of last week, shock and horror ensued when Burger King realized that their logo used as the avatar on their Twitter account had been replaced by the famous McDonald’s Golden Arches. Shortly thereafter, rouge tweets began to materialize. One stated that Burger King had been sold to their most fierce competitor, McDonald’s. The other tweets are not fit to print. Unfortunately, the very next day, the same scenario happened to Chrysler’s Jeep.

While social media used to be an easy way for people to share aspects of their lives, it has quickly become a way for brands to advertise and make their presence known.  With the advent of social media marketing, Facebook and Twitter have created ways for big brands to pay and have their content promoted. However, it seems as though the social media outlets have placed an emphasis on the money making aspect and have failed to keep their clients safe by stepping up big brand security. Burger King and Jeep are not the first accounts to experience malicious hacking. NBC News, USA Today, Donald J. Trump, Westboro Baptist Church, and even the hacker-group Anonymous have all experienced a security breech and subsequent hacking.

Twitter refused to comment on Burger King’s plight, however it is evident that they will need to step things up to avoid offending their biggest source of income: advertisers. The revenue that comes from big-name advertising makes up about 90% of Twitter’s income. Though they have doubled their advertising revenue over the last year or so, biting the hand that feeds you is never a good idea.