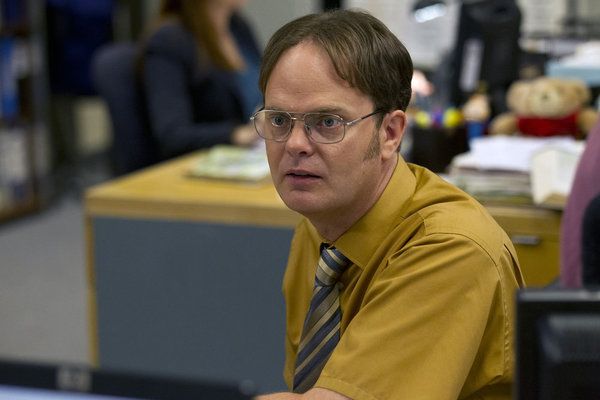 Sit-coms, while being fun and entertaining, tend to be filled with predictable character archetypes. There’s usually a cool guy, a cute girl, a dumb person, a geek. Well in “The Office” the large cast fills that quota and then some. Now I’m talking about the American version of “The Office” because the original British series had 15 episodes, the American incarnation has 200. The American version began in 2005 with renamed versions of the British characters that soon developed into their own stand-alone entities. The plot follows a paper company being filmed for a PBS documentary. But with the show wrapping up this week after nine seasons, it’s worth a look at the resident geek of “The Office” and his impact. This is our farewell to Dwight Schrute with some of his memorable quotes sprinkled in.

“Before I do anything I ask myself, ‘would an idiot do that?’ And if the answer is yes, I do not do that thing.”

Dwight, played by Rainn Wilson, hasn’t always been fun to watch. In fact, the main role for the character has been the butt of the joke at the hands of Jim (John Krasinski). But the character is a strangely intricate geek with roots in many different aspects of culture. He has expressed his interest in “Battlestar Galactica” on multiple occasions and has an almost life-like character in “Second Life.” His avatar can fly, but that’s apparently the only difference. Playing a RPG is hardly a character defining trait, but the writers for the show have repeatedly dug into the recesses of nerd stereotypes and, let’s admit it, true interests we have to build the character. Dwight Schrute has frequently addressed his martial arts experience starting at the most awkward of ranks, purple belt. He recently earned his black belt, but after being awkward and unnecessarily sticking to traditional terms. He also regularly plays laser tag and paintball. Ultimately anything that is commonly perceived as a children’s activity is Dwight Schrute’s way.

“The eyes are the groin of the head.”

Are farmer’s geeky? I never thought so, but Dwight Schrute has spent nine seasons making it look that way. He owns a beet farm that seems strangely Amish. His interests aside, the character actually counters the stereotype that geeks sit inside alone all day. He is a highly productive member of society, even though he is weird. He has a number of friends who are featured on the show and his motivation is unparalleled at Dunder Mifflin. Fans of the show are accustomed to laughing at Dwight, but the guy actually is quite successful. So successful, he almost got his own spin-off series. But “The Farm” wasn’t picked up by NBC.

“Once I’m officially Regional Manager, my first order of business will be to demote Jim Halpert. So I will need a new number two. My ideal choice? Jack Bauer. But he is unavailable, fictional and overqualified.”

Sit-coms aren’t generally meant to be some complex statement about society. However with “The Office” lasting so long the character archetypes have evolved. Dwight Schrute, the annoying geek, has developed into a layered individual. The audience has seen him fall in love, experience disappointment and excel in important areas of his life. No one in their right mind would consider Dwight a role-model, but maybe the flawed farmer- black belt isn’t as bad as we think.

“My feelings regenerate at twice the speed of a normal man”

This love for Dwight comes on the heels of the emotional home stretch of “The Office” that has successfully built a farewell that fans can be happy about. The show’s success has always been planting emotionally powerful moments in between scenes of awkwardness and humor. For a character like Dwight Schrute, that is easier said than done, but his final arch is quite rewarding. I won’t spoil it for those who haven’t watched the show. There are only 200 episodes, so if you haven’t watched them, you should probably get started.