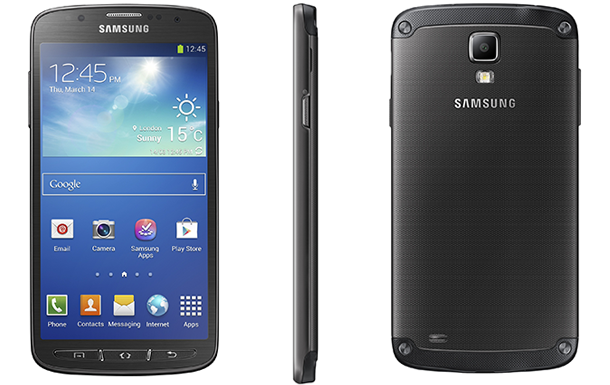 After recently announcing the Galaxy S4 Mini, Samsung has gone ahead and announced another variant of its Galaxy S4 flagship smartphone – the S4 Active.

The S4 Active is a more rugged edition of the S4 – with IP67 certification (just one below the highest possible value) for dust and water resistance. The handset can withstand being submerged 3 feet in water for up to 30 minutes, and is even capable of capturing underwater pictures, like the recently launched Xperia ZR.

The S4 Active features an LCD display instead of a super AMOLED one on the S4. Additionally, the camera has been downgraded to an 8 megapixel shooter instead of the 13 megapixels available on the Galaxy S4. This one though, shoots underwater as well. There’s an ‘Aqua Mode’, which according to Samsung, will “increase visual quality and clarity for enhanced underwater images and video.”

The S4 Active features the same 5 inch screen, with 1080p display at 443 pixels per inch. It is powered by a 1.9 Ghz quad-core processor, which may or may not be the one powering the Galaxy S4. It is complemented by 2 GB of RAM, and 16GB of on-board storage, which is expandable with a microSD card slot. The front camera is capable of 2 megapixel imagery.

There’s support for 4G LTE and NFC, along with an IR port – and Wi-Fi of course. The phone runs on a 2600 mAh battery, like the Galaxy S4. The phone will ship with Android Jellybean 4.2.2, and will feature the usual Samsung apps – Air View, Air Gesture, S Health, S Travel, S Translator etc

The phone will be available in a wide range of color options – Urban Grey, Dive Blue and Orange Flare, to be precise. Samsung says it’ll initially hit the US and Sweden first, but hasn’t divulged any details on the pricing.

Samsung will be showcasing the phone, along with the S4 Mini and other Ativ devices, at its Premiere Event in London on June 20th.

Call of Duty: Ghosts – What the Trailers Did and Didn’t Reveal

Rumor: Nokia Tablet Being Tested at AT&T for July Release