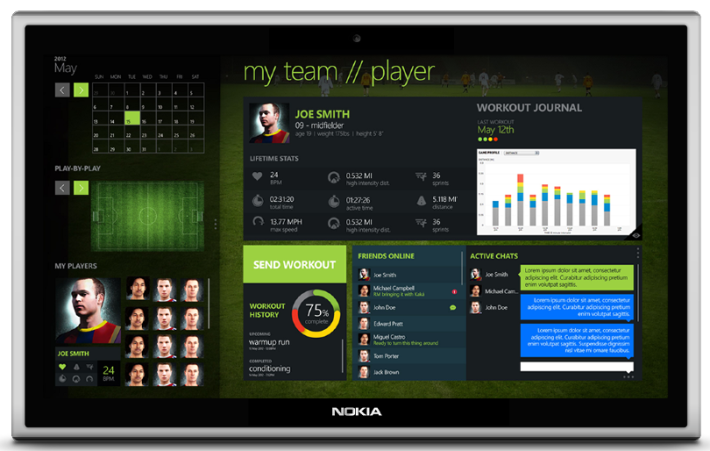 We’ve all been hearing about the Nokia EOS being tested at AT&T, slated for a July release. Now, reports have emerged that there is a Nokia tablet being tested as well, to be released along with the EOS.

Speculation about Nokia entering the tablet market has been rising for some time now. Nokia had earlier indicated that it was interested in the tablet market, with CEO Stephen Elop conceding that the company is looking at the market ‘very closely’.

“We are studying very closely the market right now as Microsoft has introduced the Surface tablet, so we are trying to learn from that and understand what the right way to participate would be and at what point in time.” – Stephen Elop in February, 2013.

Then in April this year, a patent filing emerged, describing an ‘apparatus cover with a keyboard’ – which sounds similar to Microsoft Surface. This Around the same time, a series of images were leaked, revealing a Nokia tablet running the ‘adidas micoach app’. The source link was taken down pretty quickly, and that only fuelled the rumors further.

Now, multiple reports are claiming that an actual Nokia tablet is being tested, along with the Nokia EOS Windows Phone, at AT&T. Nokia will be continuing its association with Microsoft – the tablet is said to be running Windows RT, which hasn’t really been all that successful.

The Nokia EOS, codenamed Elvis, is said to be the first PureView Windows Phone, and also the first Windows Phone with a quad-core processor. According to a new report, it will feature a 720p OLED screen, and 32GB of storage. It is expected to launch in July this year, with an improved version of the 41 megapixel camera that was earlier found on the Nokia Pureview 808.

Although patrons of Nokia would welcome its entry in to the tablet market, the company’s choice of sticking to Windows RT may not yield the results it expects. The OS has not been successful as of yet – HTC recently scrapped plans of a Windows RT tablet as well, owing to weak demand.

The 10 inch tablet is expected to launch along with the EOS as well, and should be coming with exclusive apps from Adidas.