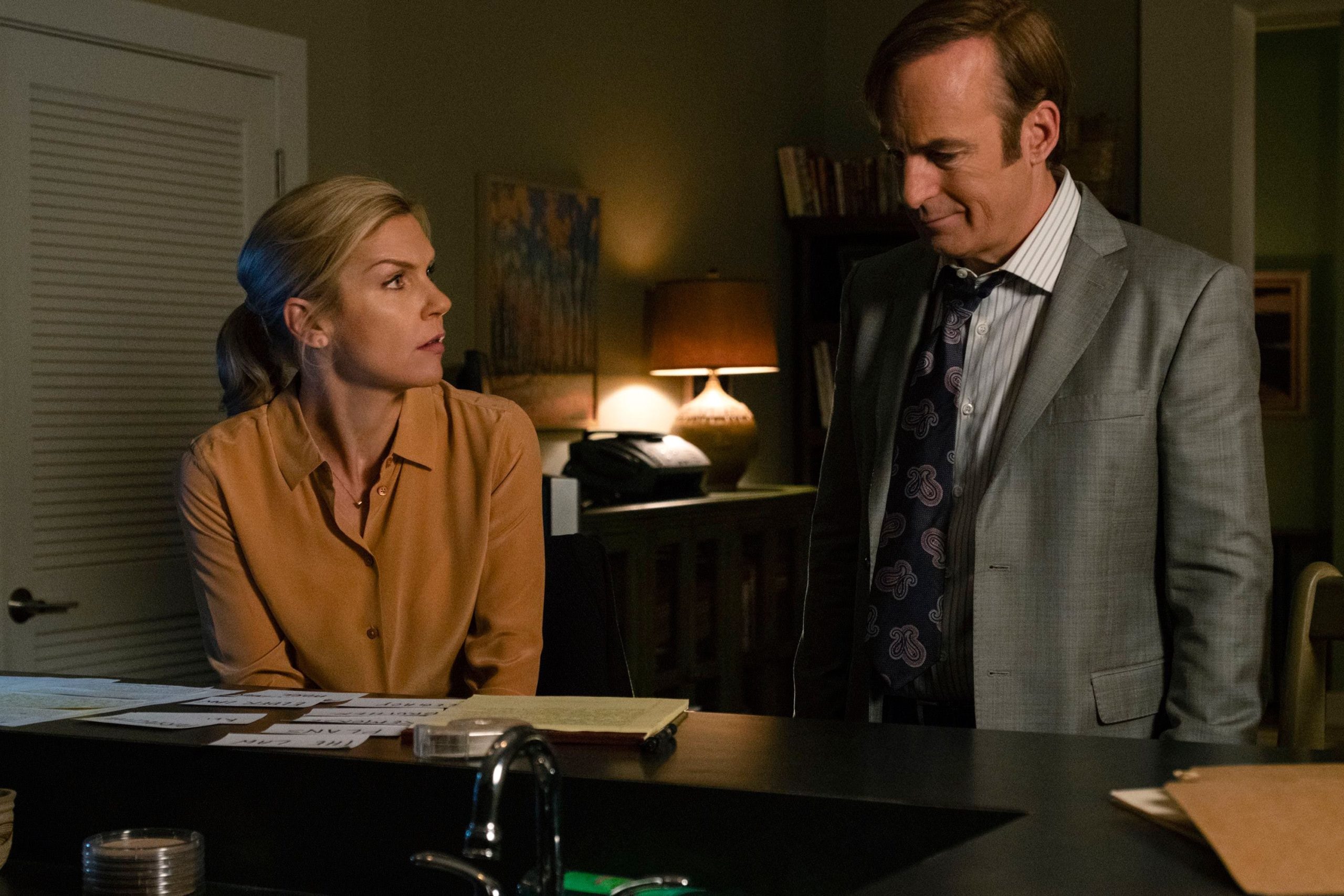 Nothing you can say or do will make anyone trust you again.

This is actually Mike’s message to Werner after the failed escape attempt (which we’ll get to in a second). But it could also serve as a thesis statement, not just for tonight’s episode, but for the entire series. As season four comes to a close, Jimmy finally realizes something (or maybe just accepts something he’s known all along): no matter how hard he tries to be what the Chuck McGills of the world think he should be, or even what the Kim Wexlers of the world want him to be, it’ll never be enough.

The specter of Chuck McGill has hung like a dark cloud over the entire season, but his presence is especially strong this week. The flashback to Jimmy’s swearing-in ceremony and the karaoke-themed after party highlights the fact that, even though we already know that Chuck never really accepted Jimmy as a peer, there was still love there (and maybe even a little bit of mutual respect). And so when we come back to that same hearing room for the bar committee to hear Jimmy’s appeal, and Jimmy waxes eloquent about how all he’s ever wanted to do is to make his brother proud, everyone’s tearing up. And it works—Jimmy gets his license back, and he and Kim have a good laugh about how he pulled one over on the New Mexico state bar.

Except for the fact that Kim’s not laughing. And although the season ends on a somewhat ambiguous note, this may be what finally ends the relationship. Kim has been there for Jimmy through all of his ups and downs, and she’s risked her career numerous times (literally) to help him. In fact, she’s been a willing accomplice in his latest unethical scheme, which involves “anonymously” donating a reading room in Chuck’s honor and feigning grief at his gravesite just so he would look sincere at his appeal hearing. So she obviously doesn’t mind the fact that he cuts corners or plays fast and loose with the truth sometimes.

But Jimmy’s performance at the hearing represents a whole new level of dishonesty—not only to the bar committee, and to Kim, but also to himself. He’s been ignoring his true feelings about Chuck the entire season, and it’s almost forced them apart already. And while Kim has seemed to be okay with that for a while now, this may have brought back the reality that Jimmy’s never going to be someone she can really trust—no matter how much she loves him—if he’s not willing to deal with Chuck.

But that ship has sailed. I’ve argued several times that the “transformation” of Jimmy into Saul is really just Jimmy accepting who he really is, for better or for worse. And while that’s been gradually happening all season (really, over all four seasons), Kristy Esposito is the catalyst that seems to finally push Jimmy over the edge. She doesn’t mean to—she’s just a high school senior who wants to study law and is applying for the first annual Chuck McGill Memorial Scholarship. Although she seems to be as academically qualified as the rest, she only gets one vote (Jimmy’s) because she was caught shoplifting as a sophomore. For Jimmy, it’s like looking into a mirror. “As far as they’re concerned, your mistake..is who you are, and it’s all you are” he tells her, but he’s also talking to himself. And, at that moment, he realizes that, if he wants to be a successful lawyer, he’ll have to do exactly what he tells Kristy to do—cut corners. Don’t play by the rules. If you want to be a success, take it—because “they” won’t give it to you.

As I mentioned earlier, Werner is another one who can’t be trusted—but the people he works for are a little less forgiving than the New Mexico legal community. Apparently Werner’s “escape” last week was just what he had described—a few days at a local spa with his wife. Which he might have gotten away with (or at least lived to tell about) had he not talked too much (again). Mike does his best to keep Gus from killing Werner, but Gus isn’t big on loose ends. So Mike offers to do the job himself—not because he’s heartless, but for the opposite reason. Mike’s the consummate professional, but he’s not made of stone. He can see that Werner’s incredibly homesick and just wants to see his wife. But the work comes first, and Mike knows that leaks can’t be tolerated. Werner’s a nice guy, and he’s an exceptional craftsman. But he just isn’t cut out for an extended, secretive project like this, and so he has to go. At least Mike’s able to do it humanely.

And with that, season four comes to a close. The Offices of Saul Goodman and Associates will undoubtedly be open for business in season five. But will Kim still be in the picture? And who’s going to finish the superlab? And will we finally get those Walt and Jesse cameos we’ve all been waiting for?

Netflix Will Be Rebooting ‘The Chronicles of Narnia’