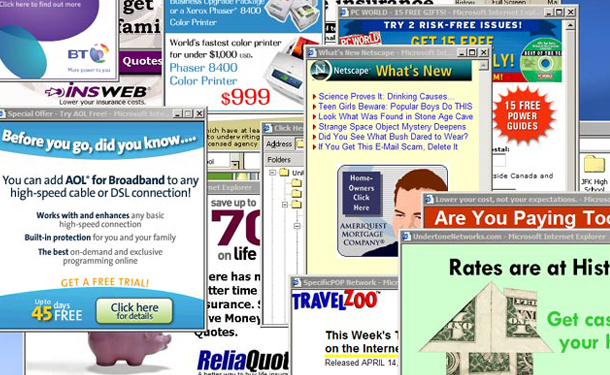 Most websites function primarily through advertising revenue, and there is typically no decent alternative. That something can be so pervasive yet function with such questionable efficacy is a source of great intrigue, and the sketchy metrics that abound regarding the specifics of its financial justifiability make me wonder if the whole system is fundamentally shaky. The process need not inspire so much disdain, so with Google poised to change things up, let’s have a look at how a broad rethink could offer more transparency and stability.

To understand what exactly is wrong with the way things operate now, it helps to look back. Advertising has always moved with the times, going anywhere there are products to be sold and money to be made, and it shot into action when the burgeoning World Wide Web started its momentous spread. Unfortunately, in the early days of the internet, websites looked—for the most part—horrible. It couldn’t really be avoided; there wasn’t much data to play with, connections were slow, and everyone got carried away with the novelty of throwing spinning rainbow-colored headings around as if animated GIFs held the power to cure any malady. As such, ads were gaudy pieces of click bait, produced cheaply and lazily for a platform around which skepticism took a good while to die down.

You can probably guess what happened next. The internet moved on (with animated GIFs leaving and presumably never ever returning) but most ads didn’t. They just stuck around, with those responsible taking a long time to work out what they were really accomplishing. For every person who clicked on an ad intentionally, there was one dissuaded from ever being interested in the products advertised by the misleading messages, deceptive buttons, pop-ups, beeps, and other irritating tricks.

So where are we today? Well, advertising is as big as ever, and remains the backbone of Google’s operations. Annoyingly, while we’ve seen an increasing degree of legitimacy attributed to internet ads (most notably those tying into viral marketing ploys), the old garbage still sticks to anything it touches. It accomplishes next to nothing, but it also costs next to nothing, meaning the production never stops. Endless pop-up ads for endless Viagra products, never actually selling anything, lingering like the sticky residue from a removed bottle label.

The Opportunity for Mutual Benefit

I don’t hate advertisements; I never have. They don’t bother me when I go to a cinema, or when I watch television, or when I (rather more rarely) listen to the radio. They can be funny, awe-inspiring, sad, clever… sometimes I actually want to buy something advertised, which is clearly a ridiculous concept. When glossy magazines run ads, thought goes into them because they know their method is a viable one. That’s what I want from the internet.

Here’s the dream: the pop-ups and ads designed to look like Windows error messages all vanish, the support of their insane overlords having been removed overnight. All of a sudden, people find themselves able to—loosely speaking—trust online ads. Each thing they see has a genuine product or service behind it, with no hidden agendas or fakery. Pay-per-click business flies up because the average quality of the marketing work has just soared, and that opens the door for further progress. Websites get money, marketers reach people, and people are introduced to things they might want in an unobtrusive way.

The Slow March of Progress

While I concede that I have long derived some amusement from the idea that a practice of such unclear value can be sustained for so long by virtue of no involved party being absolutely sure of its uselessness, I was quite pleased to read that Google is ready to work its algorithmic magic on digital display advertising. I am aware of the need for revenue generation, and I don’t want to have to use blocking services as a result of new browser windows periodically opening and closing by themselves. As long as they are professional and tasteful, I’m quite happy to see some ads while I surf the web so everyone can get what they want.

In closing, while I recognize that things have already become significantly better on this front, I contest the reasons, and would wager that they result more from smarter browsers than cleaner websites. The fake download buttons and spam surveys are still out there somewhere, and there they will remain until they are rendered redundant and obsolete by robust standards, diligent enforcement, and the general recognition that the online community is truly ready to move on from its history of murky lawlessness and horrendous clip art.