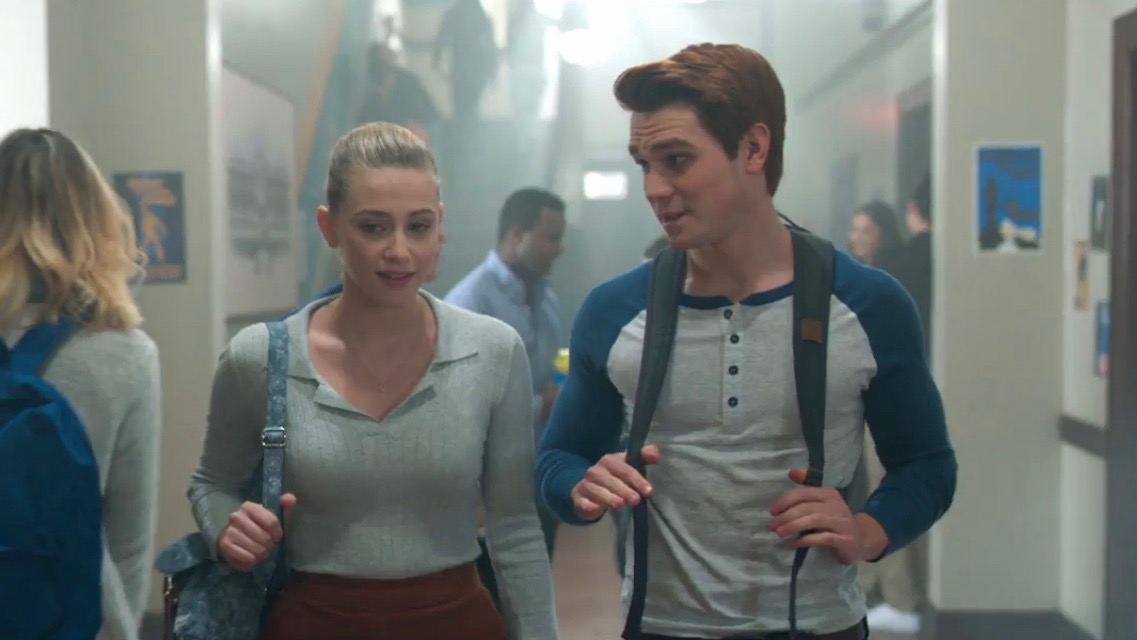 This post contains spoilers for seasons one and two of Riverdale.

Aguirre-Sacasa went against the standard for these events and openly divulged several teasers for what fans can expect. Some of that is the return of fan favorite elements. That begins with more time spent in Riverdale High. At some point the characters will take their SATs. But in true Riverdale style, the cast tease that it will be the SATs “with murder.”

Betty and Jughead (Cole Sprouse) will team up to investigate a mystery as the couple begin the season in a good place. “So far, so good” Reinhart said of the couple affectionately known as “Bughead.” Apa gave a different, shakier status report for Archie and Veronica (Camila Mendes). However that’s not the redhead’s only problem as we pick up the story. Season two ended with Hiram Lodge (Mark Consuelos) framing his former protege for murder.

The trailer reveals that Archie has acquired some ink while in jail, the brand of the Southside Serpents. He’ll need the help with Perry revealing that Lodge has taken the step from being an antagonist last year into this season’s main villain. Apa said that he learned “brawling” (or boxing) to prepare for the upcoming storylines. So we’re seeing the character depart more and more from his folk music/football days.

Potentially the biggest reveal of the afternoon surrounds the Jones family, whose respective actors weren’t on hand. Gina Gershwin has been confirmed as Gladys Jones, Jughead’s mom. Also, the long-referenced Jellybean will appear, played by young actress Trinity Likins. There has been talk several times over the seasons of FP (Skeet Ulrich) moving Jughead away to live with his mother and sister. But it seems they’ll finally be coming to town.

Another big and mysterious change comes in the form of the “Gargoyle King,” a creepy costumed figure tormenting Riverdale. The cast didn’t divulge too much about the creature, but three seasons in that’s what fans would expect. The Black Hood turned up in the season one finale and wasn’t unmasked until the same point in season two. It looks like that case is finally closed with Hal Cooper (Lochlyn Munro) being exposed as the murderer. Naturally, all isn’t well even with him behind bars.

Aguirre-Sacasa is splitting his time this year between Riverdale and The Chilling Adventures of Sabrina set to premiere on Netflix later this month. While Riverdale is creepy and mysterious, Sabrina crosses into the supernatural. The main character is a witch after all. The shows do exist in the same world however. Aguirre-Sacasa was happy to leave hope of a cross-over in the future between the two Archie Comics properties. But that’s not in the immediate plans. “Never say never” was his term of choice with that and other fan suggestions. That crossover would potentially bring about a shift with the Riverdale crew towards more fantastical storylines. “Afterlife with Archie” anyone?

As it is, there is plenty to unpack with season three. The Halloween episode is a flashback show with the younger actors playing their parents in high school. Alice and FP will be spending some time together this year, a relationship that’s been teased quite a bit. It turns out she even has a serpent tattoo. Those seem to be popping up more and more. There is also a mystery that will unite the parents together. Usually that type of thing is left to the teenagers on this show. Aguirre-Sacasa and Reinhart also admit that it will be another tough year for Betty. That’s Riverdale for you. It might be fun to watch an episode or two of the characters relaxing with no drama. But it wouldn’t last for long.

Through the entire hour-long panel for Riverdale, there was no mention of Pop’s Chock’lit Shoppe. That’s why I watch. I come for the drama, stay for the milkshakes.