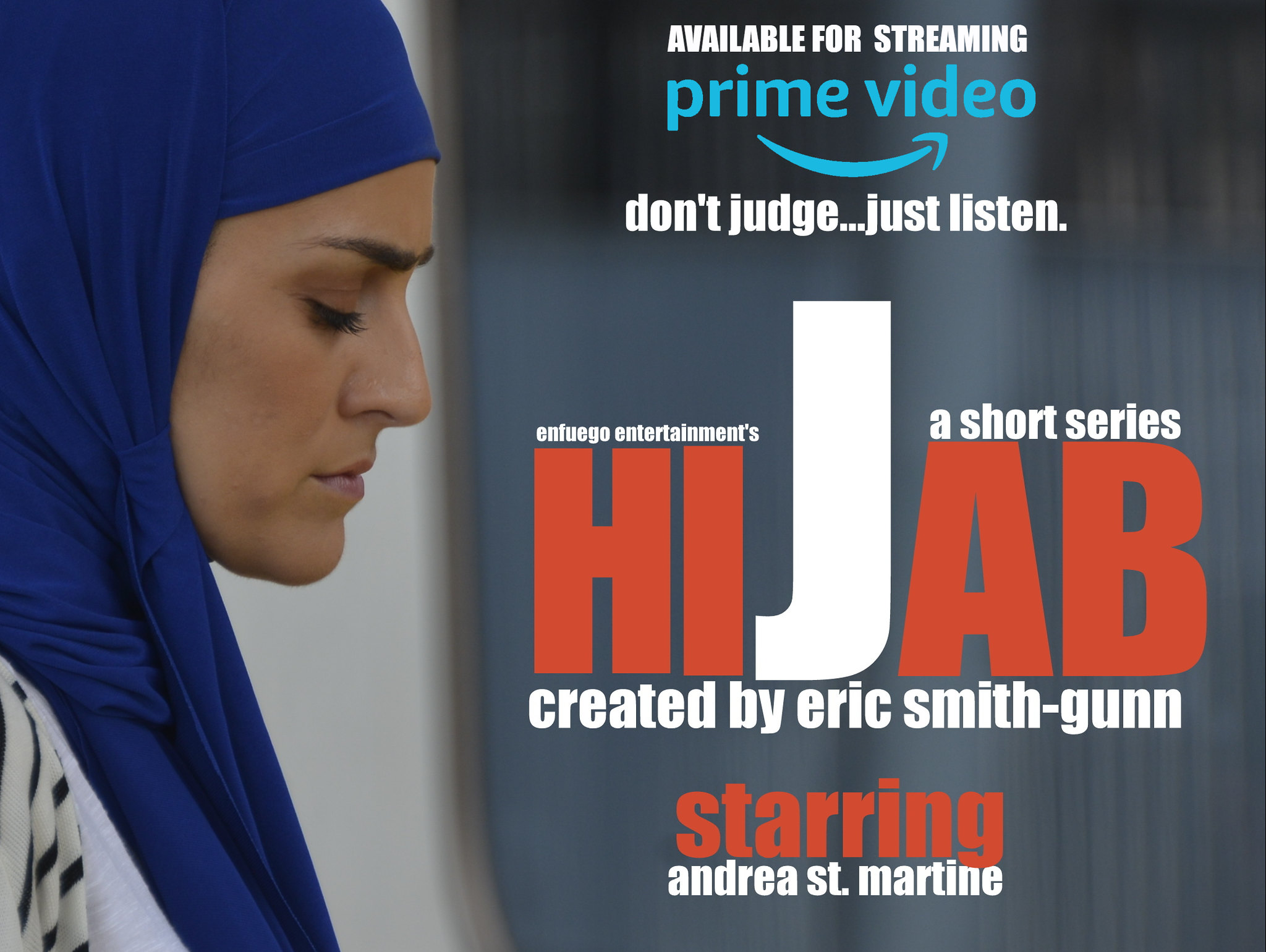 Knowing that Geek Insider’s Matthew and I had an interview scheduled with the Hijab creative team, I watched the pilot episode twice; once to get the overall feel of it and the second time to take notes for this review and prepare for our conference with writer, producer and director, Eric Smith-Gunn; producer, set design and wardrobe, Pam Meisl-Smith, and lead actress, Andrea St. Martine. 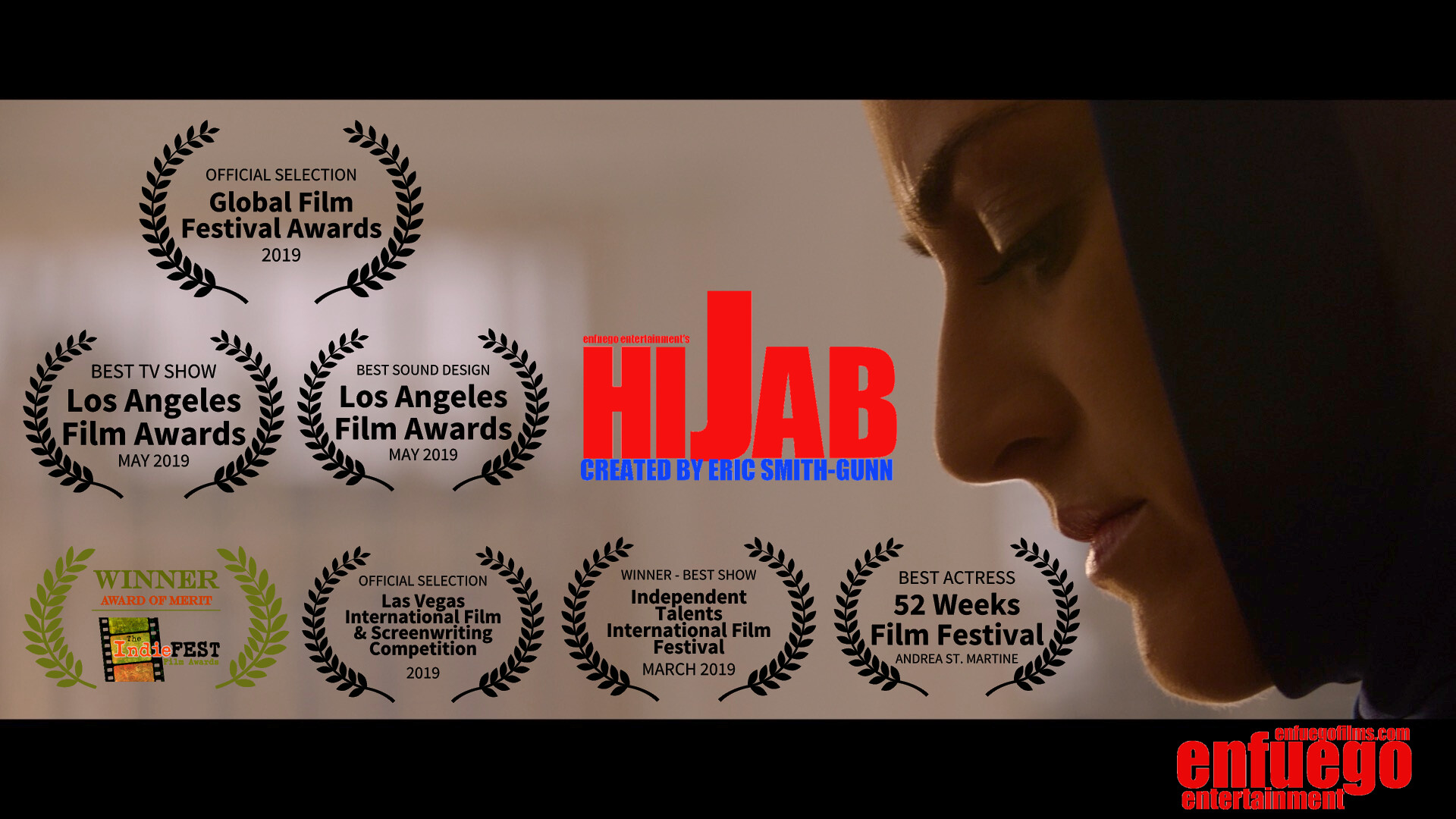 As a binger watcher of many TV series, I approached this fully prepared to “suffer through” a pilot episode to get to the good stuff, ie. the rest of the series, but the opening scene of Hijab promptly grabbed my attention.

From the tragic scenes of a subway bombing, to a surreal walk in bloodstained clothes, we get an immediate sense that Rania Dominguez has lived through trauma. This sets the stage for truly understanding Rania’s perspective in the events that would follow. The next 40 minutes is a plethora of scenes that give a kaleidoscope view of Rania’s life.

We have a glimpse of her trauma, family dysfunction, strained relationships and stereotypes. Despite the negatives in her life, she finds room for community outreach to empower others in spite of her hardships.

Admittedly, the first time I watched the pilot episode of Hijab, I was severely tempted to fast forward through the long, quiet moments in the beginning. I’m glad that I remained patient. You see, in a normal story arc, we are usually carried through by waves of conflict and resolution; we are bothered by an issue and then it’s resolved. Hijab doesn’t do that. Through Eric Smith-Gunn’s direction, he invites us sit with Rania’s story. It then occurs to me that it is in the long and quiet scenes where we are allowed to absorb the strength and grace she has to move forward.

Smith-Gunn uses episode one like a corkscrew that twists deeper with every scene. Ms. St. Martine’s depiction of a Latina Muslim has emotional depth and truths that we can all relate to. Seeing the story of Rania unfold keeps us wondering where she finds the strength to keep going where mere mortals would shut themselves away from a cruel world.

Ahh, good job. The next part you need to know for exclusive free stuff on Cards, the Universe and Everything is –

You’re halfway there… Next, there was quite a few movies scheduled for release in March and as always, we had the lowdown on what was coming. If you want 200 Gems, 20,000 Coins and a couple of Epic or better cards, you’ll need to find that article for the next part of Geek Insider’s exclusive CUE code.

From my own experience of being a persona non grata, I found myself relating very much to Rania’s story. Essentially, we all have broken pieces in our life. We can allow those pieces to shred us or we can find purpose and wisdom through those experiences to make something whole and new. The human spirit is resilient despite moments of weakness or despair. We become strong with the telling of those stories because the butterfly effect gives others permission to speak up.

This idea is echoed in the most important monologues of this pilot episode:

“I am not oppressed. I have a story and a voice.”

Where to watch Hijab