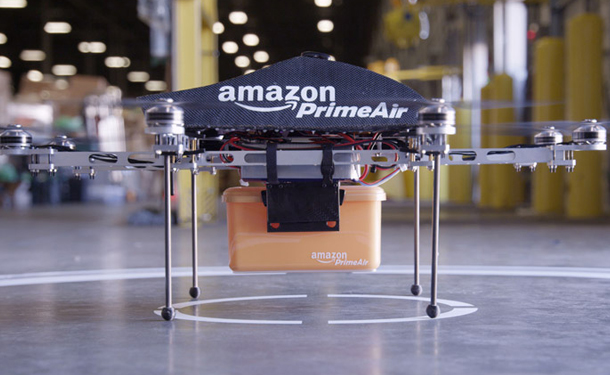 Purchasing-crazed internet users found their hearts set aflutter recently by Amazon’s reveal of Prime Air. It is a system whereby a customer can opt to have their chosen item neatly deposited in front of their door by an unmanned flying robot, and Amazon intends to have it active by 2015, assuming relevant regulations can be appropriately catered to. UPS have expressed an interest in the notion, but eBay CEO John Donahue remains unconvinced. Could fleets of shopping helicopters (or shopters, patent pending) be in our future, or is this just a pie-in-the-sky dream cooked up for publicity?

The World Made Smaller

It’s not surprising to see someone attempt something like this. Once cities started infusing their infrastructures with internet connectivity and all the other trappings of widespread information networking, they opened up a whole world of possibilities. Optimization is the name of the game now. The amount of data and the level of analysis allows for companies to make their operations smarter and more efficient than ever before. It’s nice to have frequently updated bus times and detailed traffic reporting, but there’s clearly more to be achieved.

Enter Prime Air, ready to soar high on a wave of data exchange. We don’t yet know much about the mechanical or communicative specifics, but I’d wager that any level of viability it has now reached is mostly due to the existence of a robust supportive framework. Advances in robotics, manufacturing and power generation have likely helped, yes, but none of it would be possible without the data processing; let’s go through some reasons why.

Anything that can go wrong, will go wrong. Just imagine how many things could go wrong on just one trip for a Prime Air shopter (warranted callback, patent still pending), then envision a whole fleet whizzing through the sky, day after day. Adverse weather conditions, power line snags, stray Frisbees, address issues, mechanical failure… these are just the issues that spring to mind, there are no doubt many that haven’t even occurred to me. Gun-toting robot hunters, perhaps?

This is where the data comes in. Amazon will need to constantly monitor things like location, wind speed/direction and temperature unless they think there is any value in offering the service only in still and quiet suburban areas. I can imagine them resolving the address issue by providing each qualifying customer with some kind of GPS-enabled landing pad to place outside their building, but much of the process seems hugely impractical. Indeed, the approach may be far better suited for moving items around and between adjacent or nearby warehouses where many potentially problematic factors can be controlled.

The FAA has yet to approve the use of drones for non-military purposes, but even if they had already allowed for it, they would have to consider property laws and other things of that nature. There are still various issues with automated self-driving cars, or instance, and they ideally remain fairly solidly on the ground and within predictable confines. Somewhat appropriately, the promotional video produced for Prime Air wasn’t even made in the United States, making the whole thing seem even more fanciful. After all, eBay offers a same-day delivery in select locations that aims to be as quick as an hour without using any futuristic airborne craft or testing the limits of any regulations.

That said, the laws will be sorted out eventually. Large unmanned cargo planes wouldn’t be nearly as complicated or difficult to justify, either legislatively or economically. Indeed, the Department of Defense has been working on development of cargo UAVs (Unmanned Aerial Vehicles) for military purposes for some time now, and it seems likely that approval for military use will help engender eventual approval for civilian use.

For a brief instant, Amazon got to amaze the world and drum up substantial buzz for their business in general. They have until 2015 to deliver on their lofty claims, and if they don’t follow through, they can always shrug and blame the sluggish pace of the legislature, or find some other reason why their dream couldn’t become a reality. They could even try to put a positive slant on it, Microsoft style, and say that their customers didn’t express enough interest in it.

This isn’t likely to hurt them too much regardless of what ultimately happens, but even if they do pull it off, I can’t say I’ll be too enthused. It seems cool upon first glance, but after I’d seen it in action once the appeal would likely wear off. If I ever find myself in extremely urgent need of an HDMI cable, for instance, I’ll just go to a store. That should come with a smaller risk of accidentally having my arm sliced off.