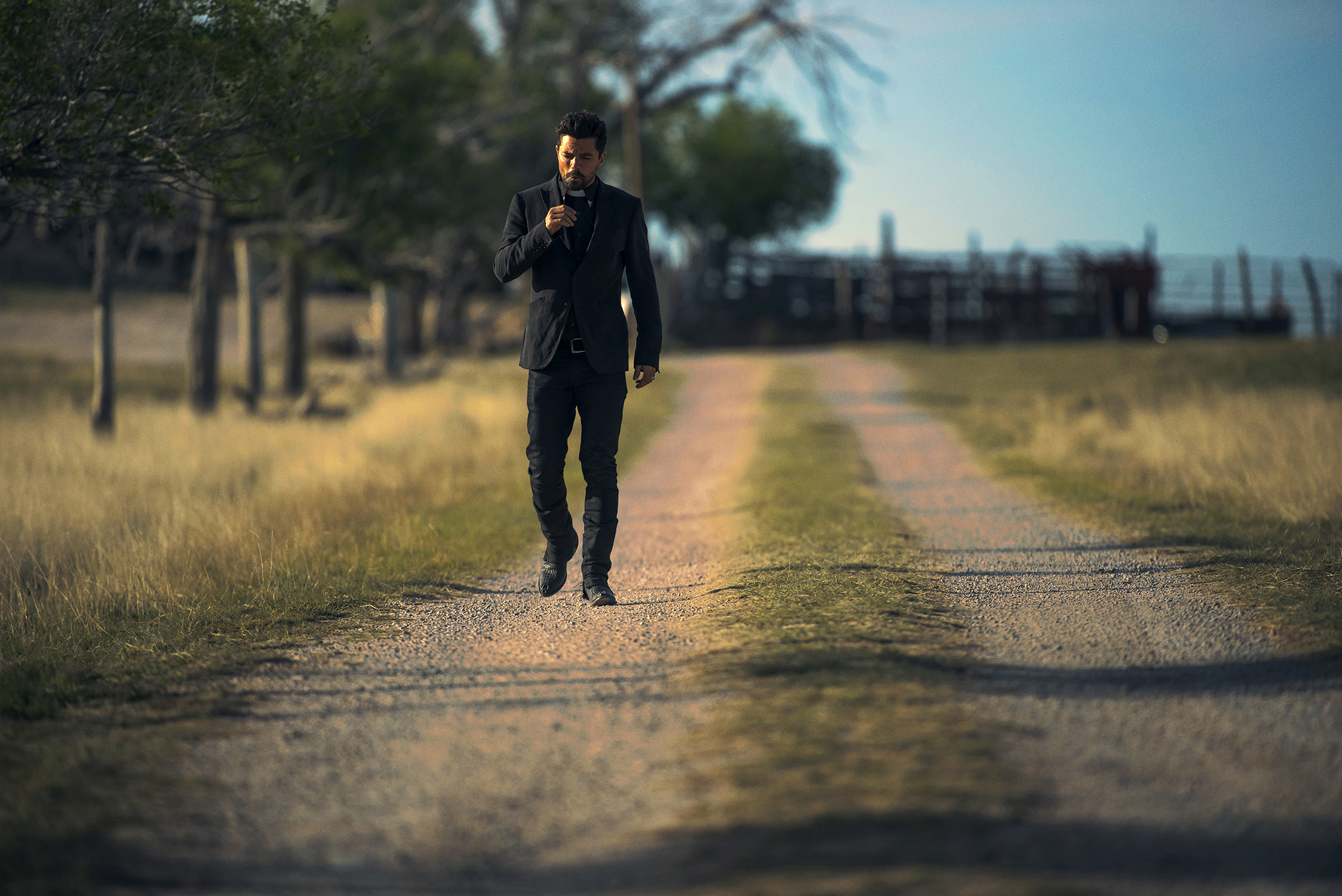 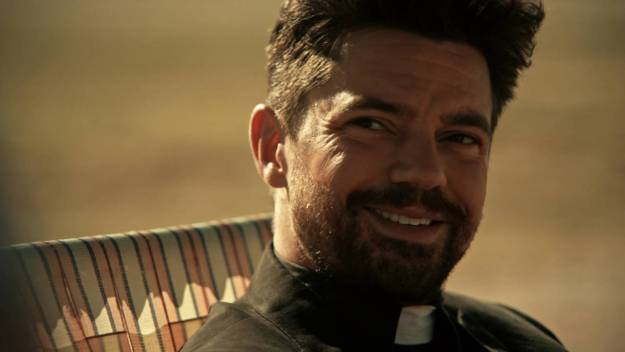 AMC’s Preacher aired an encore presentation of the first episode last night. For those of you looking for an in-depth, and spoiler free, review, check out this article we published last week. If you want to know what you missed before the next episode airs this Sunday, read on (SPOILERS AHEAD).

The episode opens with a space oddity streaking through the darkness, heading for Earth. Cut to Africa. A preacher in a rundown, but crowded, church preaches fire and brimstone. While he goes on about the Revelation and a great war, the space entity shoots down from the heavens and enters his body. He is knocked back but soon regains his feet. He demands silence, and the congregation obeys, as if hypnotized. He claims himself to be the prophet, just before exploding, dousing the crowd in blood. The entity leaves the body, and the church’s cross is inverted.

Time of the Preacher

A man named Jesse Custer wakes up in Texas. His room is littered with alcohol bottles. He dresses in his preacher garb and starts his day. It begins with fixing the marquee, vandalized to read “Open your ass and holes to Jesus,” because small town fun is apparently hard to come by. He then preaches to an inattentive crowd, stumbling over his sermon.

The congregation gathers outside for a cookout. Jesse separates himself from the crowd, giving annoyed counsel to a church member. The man has apparently been venting about his mother for ages. A young boy interrupts them. He asks Jesse to violently intervene with his abusive father. The boy prods him about his supposed violent past. Jesse gets a little philosophical over the nature of violence, and scares the child out of this sort of intervention.

Stakes on a Plane

We then go upwards again. On a plane flying somewhere near Texas, there’s a rowdy group party, led by an Irish man. The men are revealed to be vampire hunters, and the Irish man is their target. A less philosophical take on violence ensues, ending with the vampire (Cassidy), harvesting a bottle of blood and jumping out of the emergency exit.

Fast-forward to a cornfield in Kansas. A man and a woman battle it out. She eventually gets the better of him, biting off his ear in the process. She ends up in the backyard of two children. The young boy is amazed, but the girl scolds her about going around killing people. The woman wins them over and gets them to help her with some “arts and crafts.” In MacGyver-on-steroids fashion, the trio makes a bazooka. Obviously going for realism. The woman puts the kids in the cellar, and an unseen battle unfolds. A helicopter is blown up. Lots of people die. The kids seem unphased. Before she rides off, we find out her name is Tulip.

Jesse does in fact follow up on the abusive father. He goes to the wife, who at first doesn’t understand. When it clicks, she assures that she “likes it.” She’s all too comfortable talking about her kinky sex life with her preacher, but who am I to judge?

He then goes to visit a sick congregation member, only to find out his niece, Tulip, has come to visit. Jesse and Tulip are revealed to have a complicated history. She urges him to join her once again on some dubious escapade. He claims he’s turned a new leaf, but she responds that he’s just trying to be like his father. 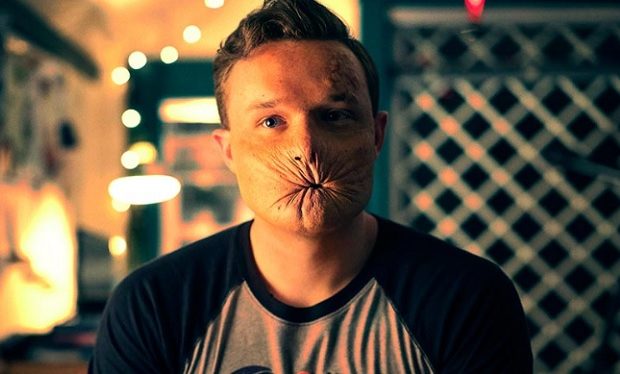 With this weighing heavy on his mind, Jesse heads for another house call. At the sheriff’s house, Jesse is lead up to the room of Eugene. Eugene is a young man with a disfigured face, and shining disposition. If you’ve read the comics, you know why he looks like this, but the show keeps it vague. Jesse assures Eugene that God forgives him for what he did. Eugene hasn’t heard God talk back when he prays, but an unsure Jesse comforts him. The scene is heartwarming, but you can tell Jesse barely believes himself. He takes that inner conflict to a bar, where he watches a news story about holy men exploding around the world. He also meets Cassidy, and fails to understand his accent. At this point, the abusive father comes in, dressed in Confederate reenactment garb. Jesse makes some wise cracks, and the man confronts him about snooping in his affairs. The man knocks Jesse over, and then promises to go beat his son for snitching. At this, Jesse takes real offense. He gets up from the floor, and proceeds to beat the ignorance out of the man and his pals. Cassidy joins in. The two go to prison, and Jesse is bailed out.

Jessie decides to leave the church, but not before trying to talk to God. He receives no answer. Just as he gives up, the entity from the beginning busts into the church. It possesses Jesse, who is knocked out for three days. He wakes up just in time for his Sunday service. Both Cassidy and Tulip are in attendance. At the last moment, he decides to stay.

Just before the service, Jesse was again approached by the congregation member seeking counsel earlier in the episode. Jesse tells him “Be brave. Tell her the truth. Open your heart.” Jesse is unaware of his new powers (remember the African preacher silencing his congregation?), so he does not expect his words to be taken so literally. The man flies to his mother’s retirement home in Florida. He tells her the truth about the way he treats him. Then he opens his hear with a knife, and dies.

Episode one does a great job bringing in some of the comic’s quintessential characters, but the hour and a half premiere presents a lot of information. If you get the chance, try and watch it for yourself before episode two airs this Sunday.

‘Fullmetal Alchemist’ Movie to Include an All Japanese Cast